The Secrets of LEGO House 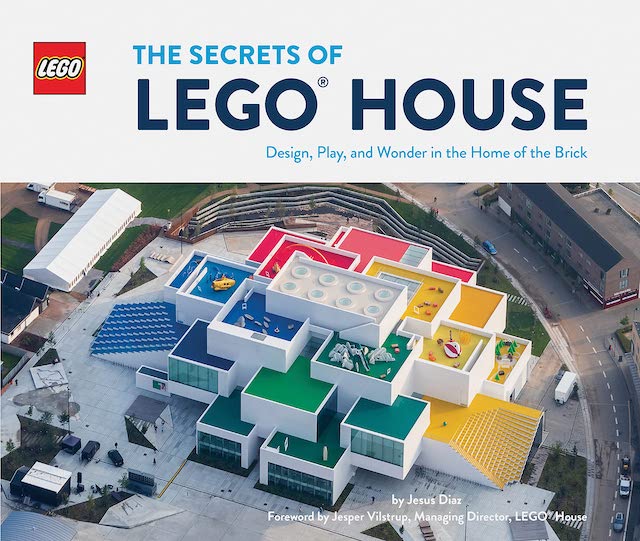 The Secrets of LEGO House: Design, Play, and Wonder in the Home of the Brick
by Jesús Díaz
Chronicle Books, August 2021

PUBLISHER'S DESCRIPTION:
This guide takes you on a tour of the "home of the brick," the official LEGO® House, so you can experience it for yourself at home!
With photos, interviews, essays, and art from the LEGO archives, The Secrets of LEGO House explores the visual wonders and the themed "zones"—yellow for emotions, blue for problem solving, green for social interaction, and red for creativity—within the iconic LEGO House in Billund, Denmark.
The Secrets of LEGO House offers an insider's look at the creative philosophy behind the iconic brand. On each page, discover the true "secret" hidden among the 25 million LEGO bricks—that everything in the house is purposefully designed around nine core principles of learning through play.
A joy for those who aren't able to visit in person, and just as exciting for those who have, The Secrets of LEGO House is a bright, colorful celebration of the endless experiences possible with LEGO bricks.
Jesús Díaz is a creative director, screenwriter, and producer at The Magic Sauce and a contributing writer at Fast Company.
REFERRAL LINKS:

dDAB COMMENTARY:
One of my first — if not the very first — exposures to the Danish firm of Bjarke Ingels was CPH Experiments, an exhibition at the Storefront for Art and Architecture in fall 2007 presenting a handful of projects by BIG – Bjarke Ingels Group. Positioned at the wide end of the tapered gallery was an impressive 12' x 12' model, "an elastic field of peaks and valleys" made from 250,000 LEGO bricks and populated by 1,000 LEGO figures. Beyond being an obvious homage to the toy blocks also originating from Denmark, in hindsight the model was foreshadowing how, five years later, BIG would be selected to design the LEGO House in Billund: a celebration of all things LEGO in the land of LEGO.
Ingels' love of LEGO extended to BIG's competition-winning design and the final form of the building that opened in 2017: a pile of giant LEGO bricks. Of course, a building resembling LEGO bricks cannot be made with stacked and interlocking blocks, even though the architects initially aimed to make the oversized bricks self-supporting. In the end, the engineers designed the building "like a bridge, with gargantuan steel beams that go from one corner to the other to support the weight of the twenty-one bricks that make the LEGO House." This according to Jesús Díaz, in his book purporting to share the "secrets of LEGO House."
Díaz is as much a fan of LEGO as Ingels, and it shows in the writing, which celebrates the modular toy as much as the building does. With a style that is as much promotional as journalistic, the book is definitely for fellow hardcore fans of LEGO, of which there are many, as well as those who have made the trek to Billund, certainly a smaller number, particularly given the pandemic overlapping with about half of the building's existence. Unfortunately, the section devoted to the building design, from which the above quote is taken, is short, at just six pages. Most of the book is devoted to the building's contents: the displays, interactive zones, and other settings that BIG was not involved in. So people interested in the architectural secrets of LEGO House will be disappointed, but LEGO fans will find much to savor.
SPREADS: