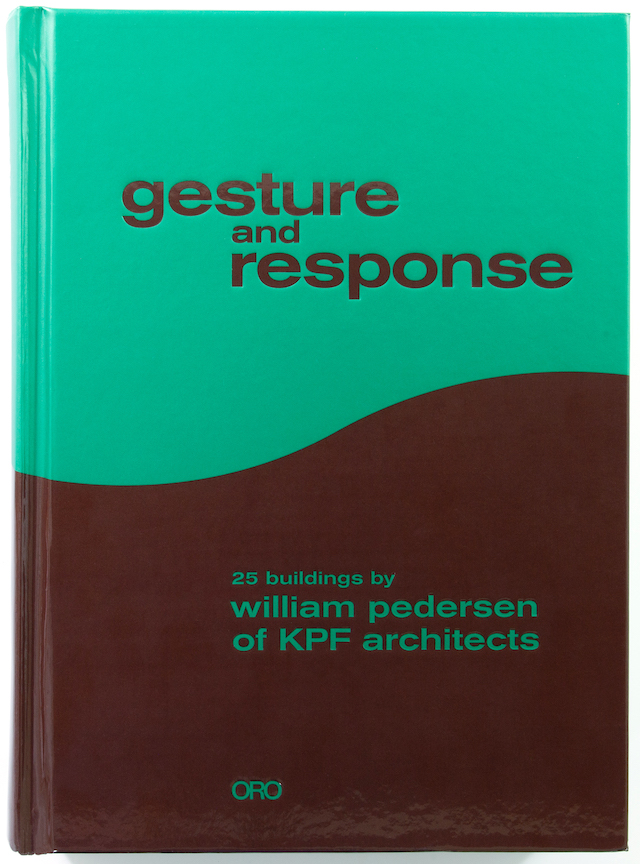 PUBLISHER'S DESCRIPTION:
“Tall buildings have anthropomorphic characteristics that encourage me to think of them as human participants in the city,” writes William Pedersen, FAIA, in the introduction to Gesture and Response.  Within this new book of 25 of Pedersen’s designs, the reader will immediately see how buildings and cities continually reach out and react to each other.
Pedersen—co-founder with A. Eugene Kohn, FAIA, and Sheldon Fox, FAIA, of KPF Architects—selected these designs as emblematic of his architectural aspirations, contextual concerns, and material manifestations.  He shows how monumental buildings made from hard glass, stone, and steel can exist at a gentle human scale.
From 333 Wacker Drive (1982) in Chicago to Hudson Yards (2019) in New York, the buildings span 45 years of the architect’s career, as KPF’s influence and global footprint grew.  After taking the reader on a chronological tour of 24 towering corporate headquarters, contextual educational facilities, and community-oriented government projects, Pedersen takes us home—literally—to examine his own house on Shelter Island that was 20 years in the making.
Introducing full-bleed project photographs are buff-colored pages with plans and drawings, along with the story Pedersen weaves about each project.  The architect’s text is incisive and illuminating, as elegant as his buildings, devoid of architectural jargon and theoretical rationalization.  Through the easy prose, he proves that KPF’s work “was not the product of a polemical manifesto.”
[...]
Similarly to how Louis Sullivan, FAIA, expressed the visceral beginnings of his architecture in 1924’s The Autobiography of an Idea, Pedersen relays the thought and emotion in his reactions to client, site, program, environment, and myriad other needs and restraints involved in any built structure.  Layered upon this are visual metaphors and dynamic interactions that fuel his creative expression.  More than a monograph, as Pedersen himself states, Gesture and Response is indeed his “design autobiography.”
William Pedersen, FAIA, FAAR, is the founding design partner of Kohn Pedersen Fox Associates (KPF), which he started with A. Eugene Kohn, FAIA, RIBA, and Sheldon Fox, FAIA, in 1976. [...] Personal honors include Rome Prize in Architecture, Arnold W. Brunner Memorial Prize from the American Academy and National Institute of Arts and Letters, University of Minnesota’s Alumni Achievement Award, Lynn S. Beedle Lifetime Achievement Award from Council on Tall Buildings and Urban Habitat (CTBUH), and Medal of Honor from AIA New York. [...] He has a Bachelor of Architecture from University of Minnesota College of Design, St. Paul, and a Masters of Architecture from Massachusetts Institute of Technology, Cambridge.
REFERRAL LINKS:

dDAB COMMENTARY:
The first of the 25 buildings presented in Gesture and Response is 333 Wacker Drive, one of the best buildings realized by William Pedersen and Kohn Pedersen Fox in the firm's half-century history. Completed in 1983, the office tower has a reflective glass facade that gracefully curves to follow the bend of the Chicago River. Even with the boom of tall buildings erected on the opposite banks of the river this century, 333 Wacker holds its own, thanks to its prominent inside-corner location and the remarkable site-specific design by Pedersen. The next building in the book's chronological presentation was realized in 1993, a gap that should pique the reader's curiosity, if not for the fact Pedersen admits in the introduction that he went through a period looking "to the transitional era between classicism and modernism for clues." The results? "Not fruitful," he admits and therefore not in the book's careful selection of buildings completed between 1983 and 2019, from 333 Wacker to Hudson Yards.
A couple of other buildings are mentioned in the introduction, both predating the partnership with Gene Kohn and Shelley Fox that formed "on the eve of our national bicentennial." First is the East Building of the National Gallery in Washington, DC, designed by I.M. Pei when Pedersen was working in his office, for what turned out to be four years in the late 1960s. Second is a project Pedersen did in the office of John Carl Warnecke in New York, where Kohn was president and brought Pedersen, enticing him away from Pei's office with the prospect of being a lead designer. Unfortunately that project, the North Academic Center ("The NAC") at City College of New York, is one of the most unloved buildings on the CCNY campus; I'm speaking from experience, having had a class in one of its windowless rooms back in 2006, and from the AIA Guide's description of it as a "stranded aircraft carrier" out of scale with its surroundings.
Fortunately, Pedersen returned to CCNY four decades later with a more successful project: the Advanced Science Research Center, its first phase completed in 2015. KPF was hired for the two-phase, three-building project because of their earlier design for Baruch College's "Vertical Campus," also in the book (both colleges are part of the City University of New York). Conceptualizing the space between the two parallel buildings of the ASRC as a "river channel," with the facades overlooking it then "the steep, stepped banks" of the metaphorical river, the generous glazing, interior lounges, and exterior courtyard signal the changes in higher-ed architecture over the last few decades. It is dramatically more welcoming — notwithstanding the security detail at the site's perimeter — than the hunkering, unfriendly NAC.
Each of the 25 buildings are presented in Gesture and Response in a consistent format, starting with four sheets of beige matte paper with text and drawings. The words are Pedersen's, illuminating the what and why of each design, while the drawings help in explaining the buildings — except when they are grayscale versions of what are clearly color drawings, as in color-coded diagrams or site plans. Full-bleed color photographs follow, on a half-dozen to a dozen glossy sheets. Most valuable are the descriptions by Pedersen, which convey how the contextual "gesture and response" design process that started with 333 Wacker has lasted throughout his long career.
SPREADS: 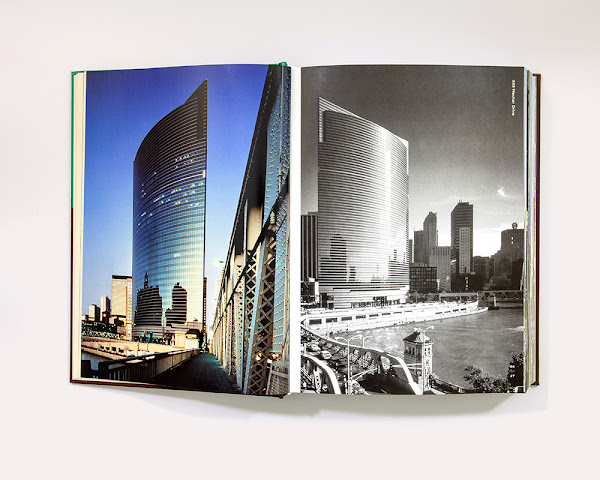 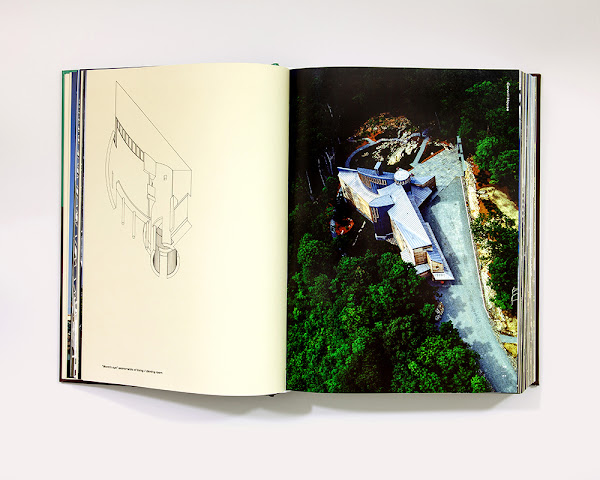 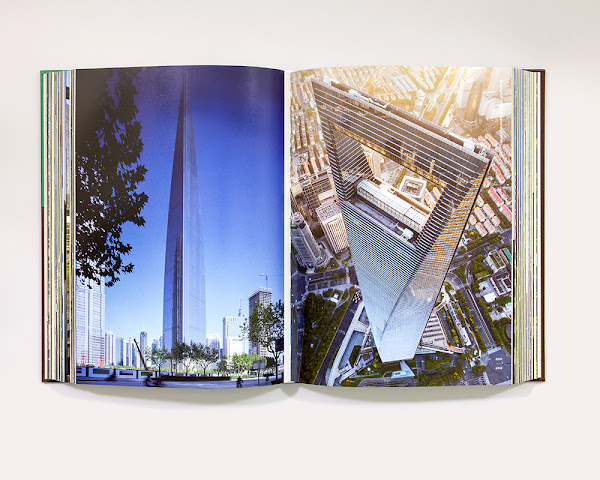 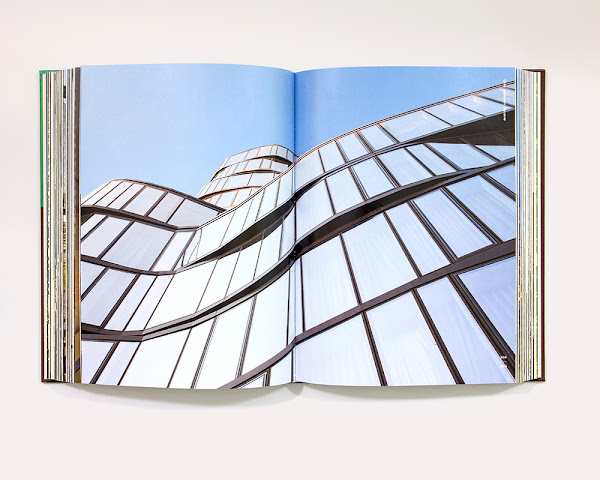 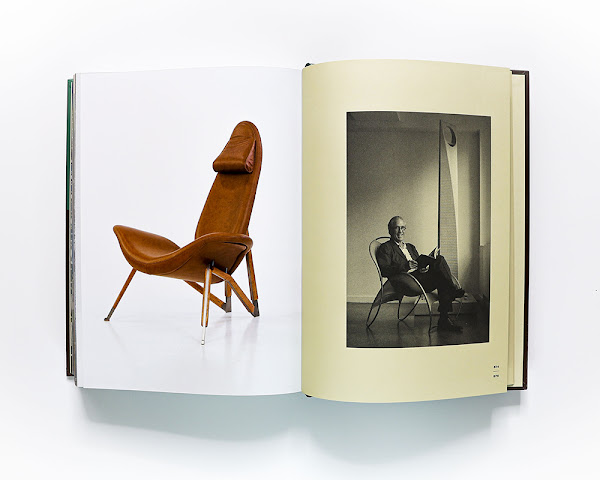