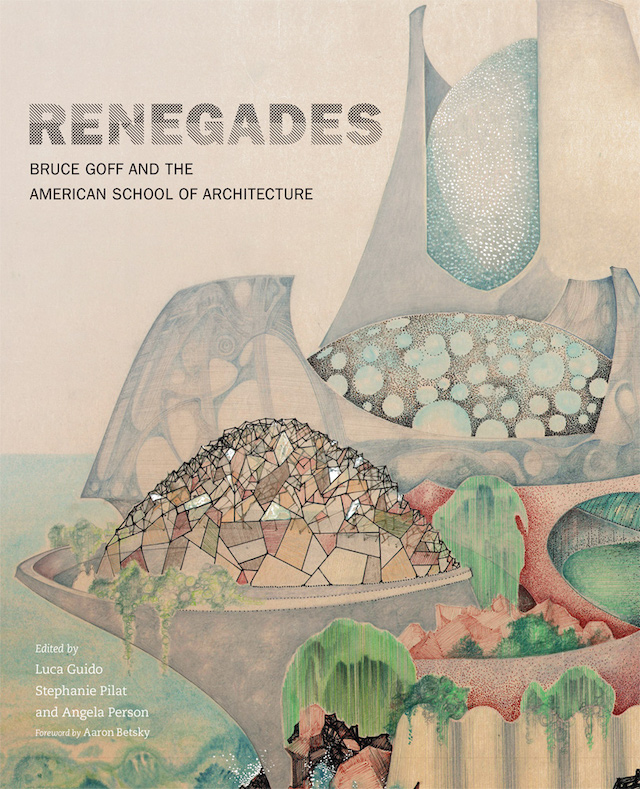 PUBLISHER'S DESCRIPTION:
Like America itself, the architecture of the United States is an amalgam, an imitation or an importation of foreign forms adapted to the natural or engineered landscape of the New World. So can there be an "American School" of architecture? The most legitimate claim to the title emerged in the 1950s and 1960s at the Gibbs College of Architecture at the University of Oklahoma, where, under the leadership of Bruce Goff, Herb Greene, Mendel Glickman, and others, an authentically American approach to design found its purest expression, teachable in its coherence and logic. Followers of this first truly American school eschewed the forms most in fashion in American architectural education at the time—those such as the French Beaux Arts or German Bauhaus Schools—in favor of the vernacular and the organic. The result was a style distinctly experimental, resourceful, and contextual—challenging not only established architectural norms in form and function but also traditional approaches to instructing and inspiring young architects.
Edited by Luca Guido, Stephanie Pilat, and Angela Person, this volume explores the fraught history of this distinctively American movement born on the Oklahoma prairie. Renegades features essays by leading scholars and includes a wide range of images, including rare, never-before-published sketches and models. Together these essays and illustrations map the contours of an American architecture that combines this country’s landscape and technology through experimentation and invention, assembling the diversity of the United States into structures of true beauty. Renegades for the first time fully captures the essence and conveys the importance of the American School of architecture.
Luca Guido is a licensed architect, critic, and historian of contemporary architecture. He is Associate Professor of Architecture at the University of Oklahoma where in 2016 he served as the Bruce Goff Visiting Professor and Chair of Creative Architecture. Stephanie Pilat is Associate Professor and Director of the Division of Architecture at the University of Oklahoma and the author of Reconstructing Italy: The Ina-Casa Neighborhoods of the Postwar Era. Angela Person holds a PhD in Geography and is Director of Research Initiatives and Strategic Planning for the Christopher C. Gibbs College of Architecture at the University of Oklahoma.
REFERRAL LINKS:

dDAB COMMENTARY:
Before discovering and receiving this companion book to a traveling exhibition that was shown most recently at the Fred Jones Jr. Museum of Art in Norman, Oklahoma, (from January 23 to April 5, 2020), I had no clue about the "American School." According to the Christopher C. Gibbs College of Architecture at the University of Oklahoma, "the American School refers to the imaginative school of design and practice that developed under the guidance of Bruce Goff, Herb Greene and others at the University of Oklahoma in the 1950s and '60s." So the American School, even though it bears a trademark symbol on the Gibbs website, is an unofficial school, unlike the Beaux Arts and Bauhaus whose teachings it stood in staunch opposition to.
Individual creativity, organic forms, and experimentation were the hallmarks of a curriculum that, to architect Donald MacDonald, emerged from "a truly American ethic, which is being formulated without the usual influence of the European or Asian architectural forms and methodologies common on the East and West coasts of the United States." MacDonald wrote those words in a special issue of A+U in 1981, an issue that, according to Christopher Curtis Mead in the first essay in Renegades, was when "the American School was first explicitly named." The issue was published less than a year before the death of Bruce Goff (1904–1982), who taught at University of Oklahoma and chaired the Department of Architecture from 1947 to 1955.
Renegades: Bruce Goff and the American School of Architecture — both the book and the exhibition — appears to be the first major presentation of the American School since that November 1981 issue of A+U. Arising from a four-year-long research project at the University of Oklahoma, Renegades exhaustively examines the School of Architecture at the University of Oklahoma, Goff's architecture and teachings, and the architects following in the footsteps of Goff, Greene and others who embraced certain aspects of Frank Lloyd Wright's organic architecture last century.
MacDonald described the American School as "probably the only indigenous [architecture school] in the United States," echoing New York Times architecture critic Ada Louise Huxtable's assertion in 1970 that Goff was "part of an indigenous American tradition." While the acknowledgment of truly indigenous cultures predating the arrival of European settlers has shifted views of indigenous in recent years, the sentiment is clear that Goff, his colleagues, and their followers did not abide by methods and models alien to the landscapes they built upon. While it's not clear in my perusal of the book if American School architects were inspired by Native American structures, the designs documented in the Renegades book and exhibition come closer to such truly indigenous buildings than any modern American architecture in that time.
The book features eight essays split into two parts — "The American Schools of Architecture" and "Environmental, Cultural and Political Contexts" — that basically equate with architectural eduction and architectural practice. Those looking for a monograph of Bruce Goff will be disappointed, as there is more documentation of the designs of other architects than Goff's buildings, but the book does reference monographs by David De Long and Arn Henderson that fans of his should search out. If anything, the book and exhibition (taking a virtual tour of the latter is highly recommended) convey how enthusiastically the teachings of Goff — stressing individual creativity, organic forms, and experimentation — were embraced by students at the time. That the architecture of the American School faded in the face of International Style modernism shouldn't diminish its potential impact on architecture today, when a stronger land ethic should be fostered. Renegades, in this sense, is a valuable  historical document but also one that might guide architects looking to determine what shape American architecture could take this century.
SPREADS: 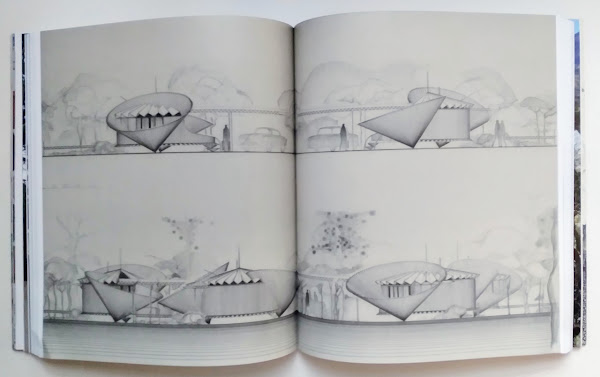 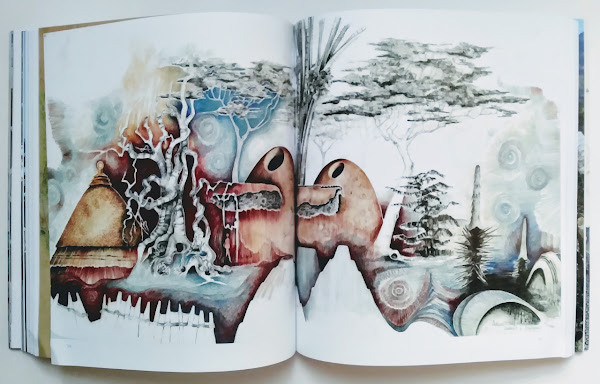 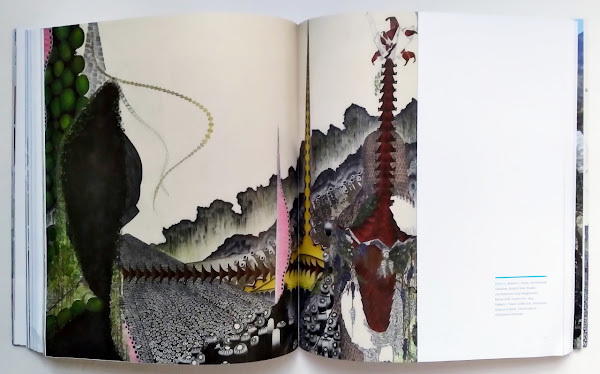 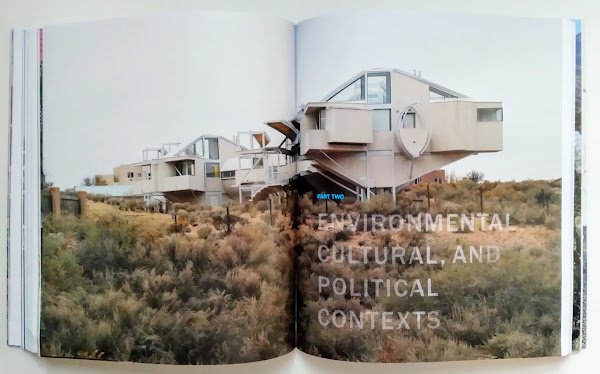