You Have to Pay for the Public Life 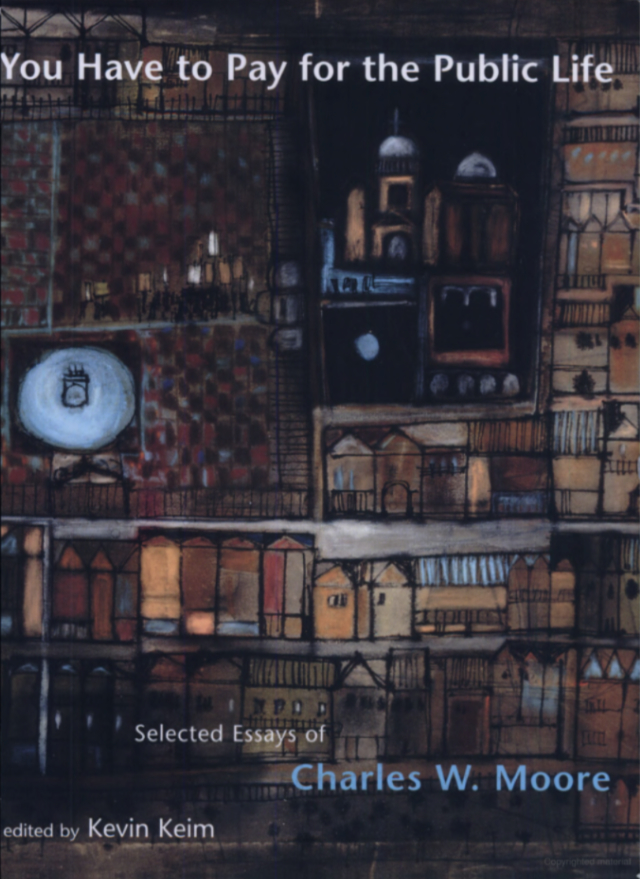 You Have to Pay for the Public Life: Selected Essays of Charles W. Moore
Edited by Kevin Keim
The MIT Press, 2001

PUBLISHER'S DESCRIPTION:
Architect Charles Moore (1925-1993) was not only celebrated for his designs; he was also an admired writer and teacher. Though he wrote clearly and passionately about places, he was perhaps unique in avoiding the tone and stance of the personal manifesto. Through his buildings, books, and travels, Moore consistently sought insights into the questions that always underlie architecture and design: What does it mean to make a place, and how do we inhabit those places? How do we continue to build upon but respect the landscape? How do we reconcile democracy and private land ownership? What is original? What is taste? What is the relationship between past and present? How do we involve inhabitants in making places? Finally, what is public life? As the world becomes smaller, and the uniqueness of places and landscapes gives way to sameness, Moore's celebration of the vernacular and of the surprising are more relevant than ever.
The pieces in this book span the years 1952 to 1993 and engage a myriad of topics and movements, such as contextualism, community participation, collaboration, environmentally sensitive design, and historic preservation. The essays in this book reflect as well Moore's scholarship, humanism, urbanity, and great wit.
REFERRAL LINKS:

dDAB COMMENTARY:
In my review of Mediated Messages: Periodicals, Exhibitions and the Shaping of Postmodern Architecture a few days ago, I highlighted a few contributions to the book, including Patricia A. Morton's "Charles Moore's Perspecta Essays: Towards Postmodern Eclecticism." Morton focuses on three such essays that Moore wrote for the student-run journal of Yale School of Architecture: "Hadrian's Villa" (Perspecta 6, 1960), "You Have to Pay for the Public Life" (Perspecta 9/10, 1965) and "Plug It In, Ramses, and See If It Lights Up, Because We Aren't Going to Keep It Unless It Works" (Perspecta 11, 1967); she also looks at a 1962 contribution by Moore to Landscape, the journal founded and primarily written by John Brinckerhoff Jackson. People not so familiar with these essays need not hunt down those three issues of Perspecta (issue 9/10 is much-coveted and therefore can be hard to find), since You Have to Pay for the Public Life: Selected Essays of Charles W. Moore has all of them — and a lot more from a an architect and educator who was also a prolific writer.
The book that takes its name from Moore's famous essay about Disneyland and other bits of "monumental architecture as part of the urban scene" on the West Coast, where the Princeton grad was based at the time, starts with an essay Moore wrote in 1952 for a student publication at the University of Utah and ends with the foreword he wrote to Alexander Caragonne's The Texas Rangers: Notes from the Architectural Underground, which was published in 1994, one year after Moore died. In between are more than forty other essays, reviews, and interviews spanning those four decades, some of them previously unpublished. They are arranged chronologically by Kevin Keim, director of the Charles Moore Foundation in Austin, Texas, not so much in strict chapters or sections, but in "sets" that Keim then prefaces with short thematic commentary. The trio of pieces that start with "Sagamore," for example, "explores themes of technology and craft, science and myth, architecture as engineering for function and architecture as instrument for imbuing sense of place."
In the grouping of the sets visible in the table of contents, below, certain essays stand on their own, including the first and last pieces, the three Perspecta contributions that were the subject of Morton's essay in Mediated Messages, and yet another Perspecta piece: "Southernness," written for issue 15, which was published in 1975 under the theme "Backgrounds for an American Architecture." The importance of place — recognizing it and reinforcing or (re)defining it through new architecture — comes to the fore across the book; this goes along with the regional nature of Moore's career (he co-founded Places, after all), which started on the East Coast then went to the West Coast and eventually ended in Texas. But as Moore acknowledged in his writings, technology enabled him to be rooted in one place but be involved with the goings-on in those other regions or in other places around the world, be it through commercial flights or nascent digital communications.
His embrace of technology and the ruminations on technology's impact on architecture were the most surprising aspects of the texts for me. "Our own places, however," he wrote in "Plug It in Ramses," "like our lives, are not bound up in one contiguous space." Such comments foreshadow the increasing role of digital technologies and their impact on "place" as something both physical and virtual. I can't help but wonder what Moore would have said about the spreading of the internet and the rise of smartphones, among other things, if he hadn't died of a heart attack at just 68 years old in 1993, on the cusp of the booming internet. I'm guessing those technologies would have managed to reinforce the importance of place for him, all the while expanding its boundaries into realms he sensed decades before.
TABLE OF CONTENTS: 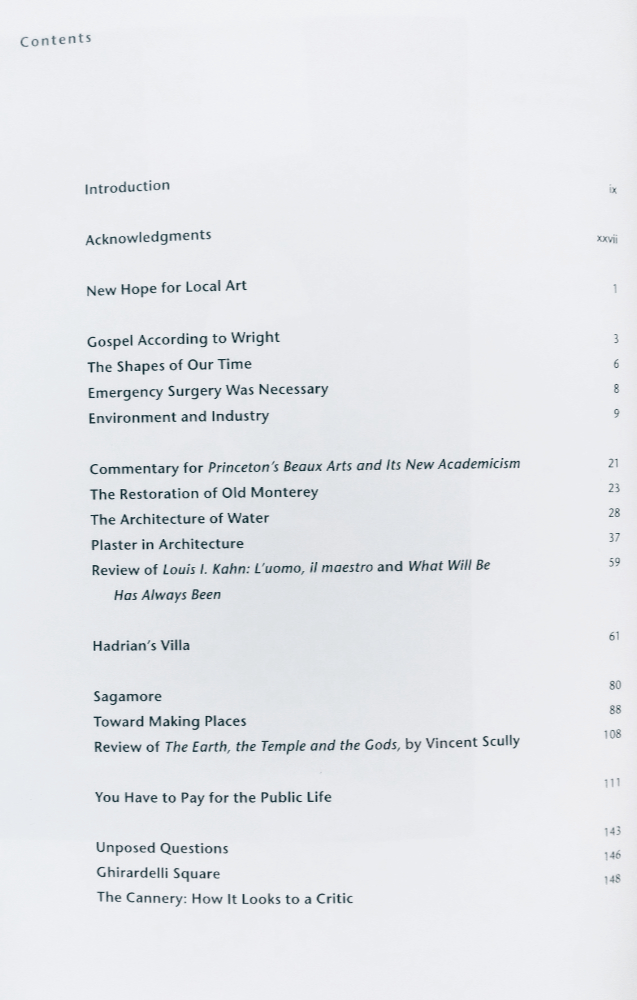 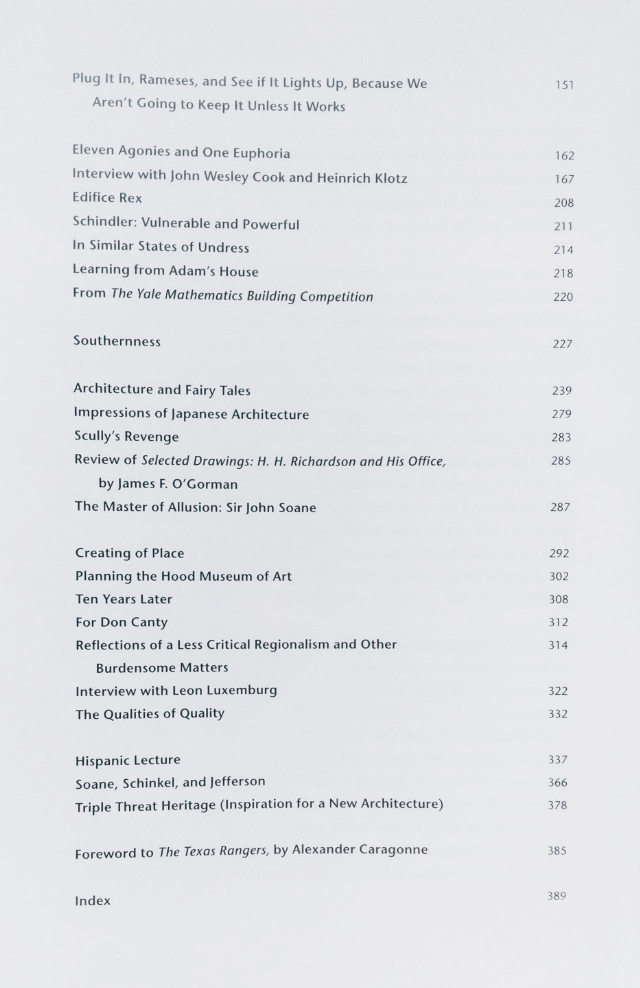