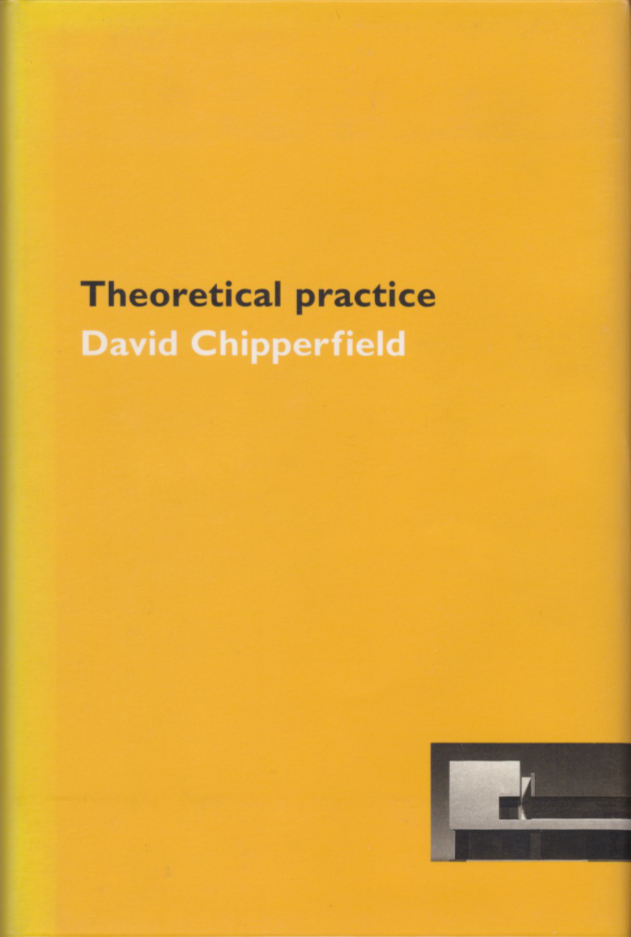 FROM THE FLAPS:
"As architects we are privileged to work with the physical world — with materials, brick, stone, wood, glass, metal, with forms and with light. We do not deal in speculation about or observation of the physical world but with the very stuff itself. Poets, painters and politicians should be jealous of our advantage."
In this book, David Chipperfield sets out a theory of design that rejects centralised ideologies and acknowledges the importance of both intuition and intellect. For Chipperfield, all design is an intellectual craft, involving the reconciliation of ideas as well as responding to the influence of process and materials. Images from built projects reinforce his themes while the central body of the book emphasises the experimentation carried out in projects for buildings in England, Japan, and Germany.
Theoretical Practice is an important contribution to architectural theory, the exploration by an internationally recognised architect of the ideas and attitudes that lie behind the production of authentic architecture.
David Chipperfield trained at the Architectural Association in London and worked for Douglas Stephen, Richard Rogers and Foster Associates. ... David Chipperfield Architects was established in 1985 and has since carried out work in various European countries, the USA and Japan. ... A Tokyo office was opened in 1987.
REFERRAL LINKS:

dDAB COMMENTARY:
A few days ago I featured a new book devoted to David Chipperfield's Inagawa Cemetery Chapel and Visitor Centre, a building in earthen, red-colored concrete nestled in the steep hillside of the Hokusetsu Mountain Range in Japan. Reading the book brought to mind early projects by Chipperfield, many of which were located in Japan. In the review I mentioned the Seibu Department Store in Tokyo and shops for Issey Miyake while also honing in on the Toyota Auto Kyoto building, one of the few buildings in Japan around that time (ca. 1990) that is on the website of David Chipperfield Architects. I learned about these projects through Theoretical Practice, a monograph and theoretical treatise by Chipperfield that was given to me by a friend not long after it came out in 1994. All these years later the book is a very difficult one to find (one copy on Amazon is asking more than $1,200!) and, for some reason, it is not to be found in the list of publications on the architect's website, similar to the Japan projects that were so important in the early years of his practice.
At the time of this small book's publication, the then "internationally recognized architect" had built primarily those smallish projects in Japan mentioned above. Instead of using the monograph as an opportunity to showcase that work, he split the book into two halves, echoed in the book's title: a theoretical first half and a second half focused on unbuilt and in-progress projects. Photos of the Japanese projects are found interspersed within the first half (first two spreads, below), where Chipperfield's theories are organized into "The position of ideology," "The physical world," and "Practical theories." The second half documents designs "[not] for buildings before they are built, but rather explorations of ideas suspended for an artificially long period without being enriched, confused or compromised by that final process that turns project into building."
Nevertheless, a couple of the projects in the second half of the book did get built: River and Rowing Museum in Henley-on-Thames, completed in 1997, and the Neues Museum in Berlin, which would occupy his practice for a decade and a half. Early designs for these two projects are accompanied by projects that remained on the shelf — or, like some of the Japan projects and this book, at least are not be found on the architect's online archive of projects. Like Chipperfield's buildings and demeanor, this early monograph is modest, prioritizing intuition and intellect over ideology and formulaic design. All these years later, these roots are still evident, even as Chipperfield's success warrants larger monographs and much larger projects, the Inagawa Cemetery Chapel and Visitor Centre notwithstanding.
SPREADS: 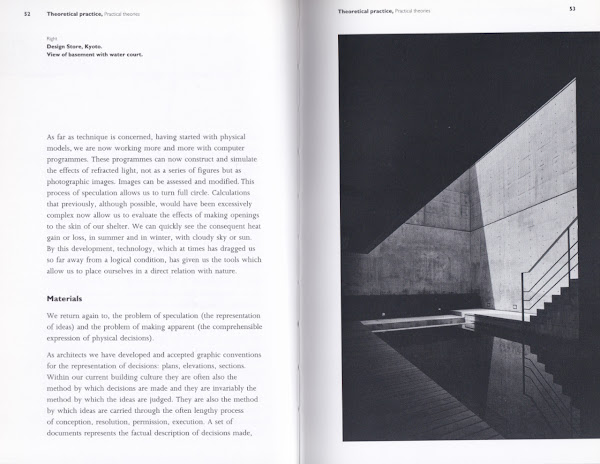 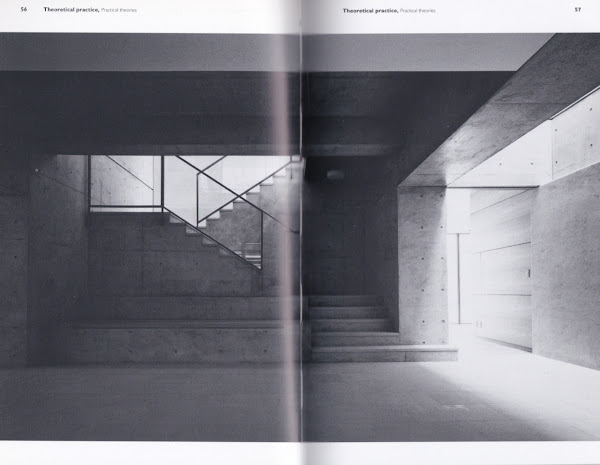 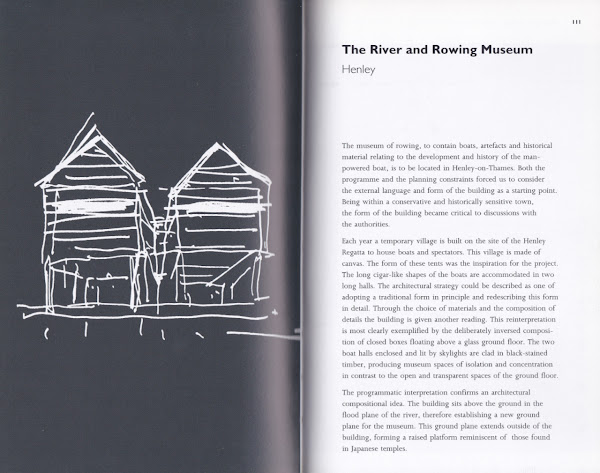 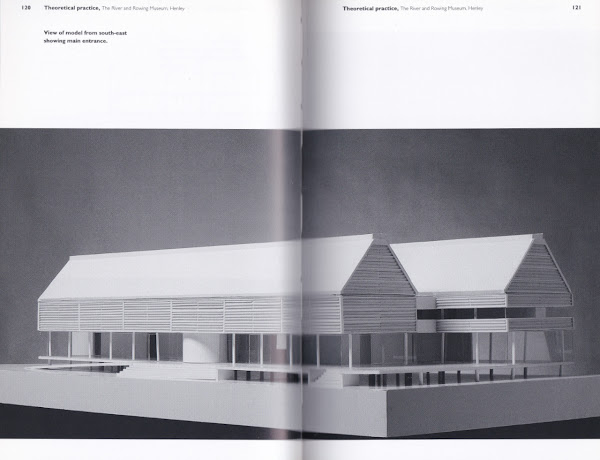 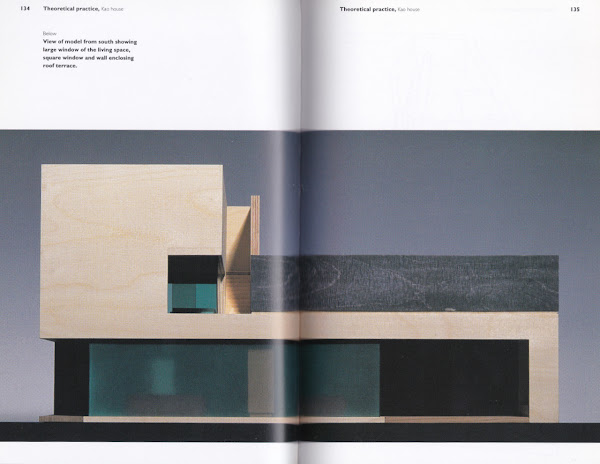 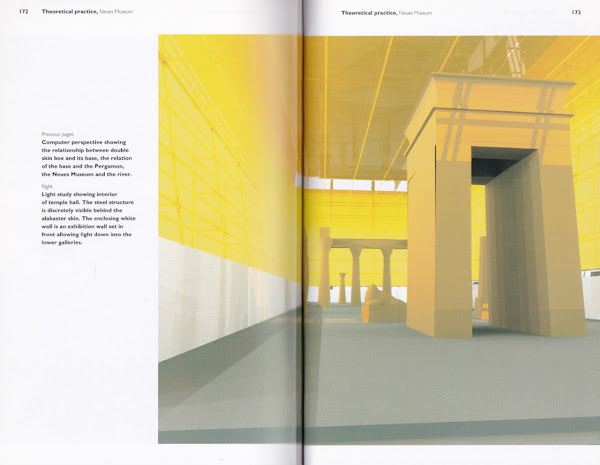