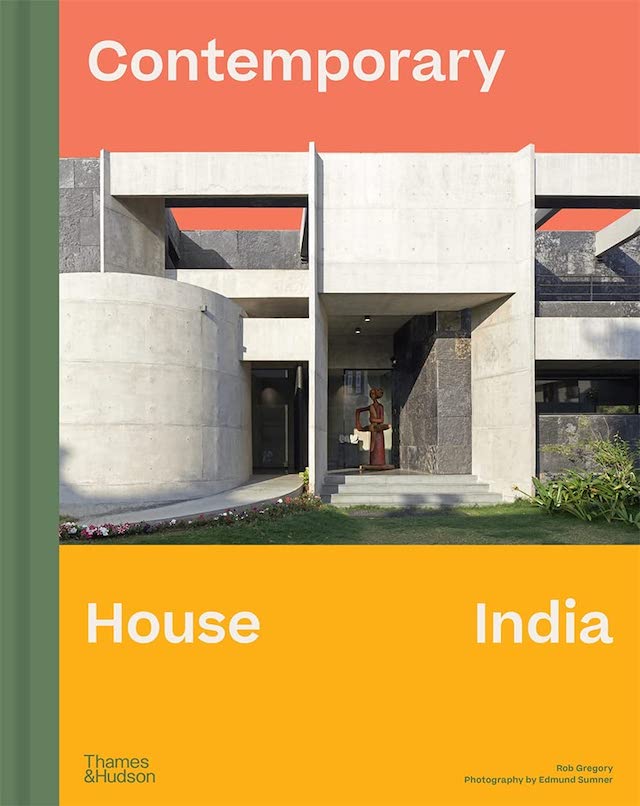 PUBLISHER'S DESCRIPTION:
India has a long, diverse history of remarkable architecture. This stunning overview of contemporary residential architecture in India features over twenty houses from across the country, designed by leading firms such as Samira Rathod Design Associates and Architecture Brio, as well as emerging architects such as Martand Khosla.
Beginning with a helpful essay, Contemporary House India is divided into four thematic chapters, each opening with a contextual introduction. Included with each featured home are detailed drawings and plans, specially commissioned photographs of the interiors and exteriors by leading architectural photographer Edmund Sumner, and accompanying text based on interviews with the architects by author Rob Gregory. Gregory places the selected homes in a global context, including the fascinating legacy of major modern architects such as Le Corbusier’s work in Chandigarh, India.
Rob Gregory spent over a decade at the Architectural Review as an associate then senior editor. He is now a teaching fellow in the department of architecture and civil engineering at the University of Bath, and in June 2019, he was appointed the senior architect for the campus division at the University of Bristol. Edmund Sumner is a London-based architectural photographer who has collaborated with leading architects, publishers, and curators worldwide since 1988. Sumner can often be found shooting in India, Japan, Mexico, the Middle East, and the United States.
REFERRAL LINKS:

dDAB COMMENTARY:
At the risk of generalizing, I've felt for a number of years that contemporary architecture in India would be better appreciated if it were documented better. I've encountered too many buildings on websites like Indian-Architects that feature subpar photography — converging verticals, bad lighting, and other qualities that are more the mark of the amateur than the professional. Not all new buildings in India are photographed poorly, but I'm guessing that a survey of contemporary architecture in the country might end up highlighting such a thing rather than the qualities of the buildings. Again, this is at the risk of generalizing, perhaps unfairly, but these thoughts come to mind when flipping through Contemporary House India because the two-dozen houses designed by half as many Indian architects are captured by one photographer, Edmund Sumner, whose consistent eye allows the diverse qualities of each house to come to the fore.
After some full-bleed teasers by Sumner on the first few pages, the book starts proper with Rob Gregory's conversation with B. V. Doshi and one with some of the architects featured in the rest of the book (Samira Rathod, Arjun Malik, Gurjit Singh Matharoo, etc.), the latter based on a symposium at CEPT University in Ahmedabad. Both conversations are told in a narrative style rather than through transcripts, with a few important statements standing out as block quotations; likewise, the houses presented later in the book feature quotes from the architects alongside Gregory's descriptive texts. One recurring personality in both of the introductory conversations is Le Corbusier, whose Villa Shodhan and Villa Sarabhai, both built in Ahmedabad in the early 1950s, inspired many modern architects working in India. Echoes of those concrete houses with deep overhangs and porous exteriors can be found in some of the two-dozen houses collected in Contemporary House India.
The houses are structured into four chapters — Urban Living, Remote Villas, New Settlements, Improvisation — that follow a consistent format. Each chapter starts with a "featured project" that is on yellow paper. While this editorial decision gives the book a noticeable rhythm that extends to the edges, it does a disservice to Sumner's photographs, which have no choice but to be duotone on canary: Sumner's photos throughout the rest of the book are in color, but ironically the featured projects are lacking in color. Each of the projects that follow the featured project are given one page of text by Gregory and a quote by the architects, a few pages of Sumner's photos with captions, and two or three pages of drawings on gray paper. The last combines with they predominantly white pages and the four groupings of yellow pages to give the edge of the book a handsome pinstripe.
Before this book, I'd encountered Gregory's work in Key Contemporary Buildings: Plans, Sections and Elevations, published in 2008 as part of the "Key Architecture Series." This made me optimistic about the pages with drawings, given that Gregory clearly knows how to cobble together drawings from various sources and put them into a consistent format. The same applies here, with the plans, sections, and elevations that each of the 24 houses is given, but the drawings could be better in a few ways. First, while each drawing is numbered and labeled, the floor plans are not; often the furniture gives enough of a clue, but there were many times I pined for room numbers/labels. Second, some of the line weights, such as with the furniture, are so thin they are lost on top of the gray paper. Third, the sections are not keyed to the floor plans, making it difficult to decipher where they are cut. And fourth, the drawings lack scales, and it's not clear if they're all drawn to the same scale (I'm guessing they're not). So like Sumner's photographs, the drawings ultimately serve to give a consistent tone to the presentation of two-dozen contemporary houses in India, in turn enabling the uniqueness of each house to be grasped.
SPREADS: 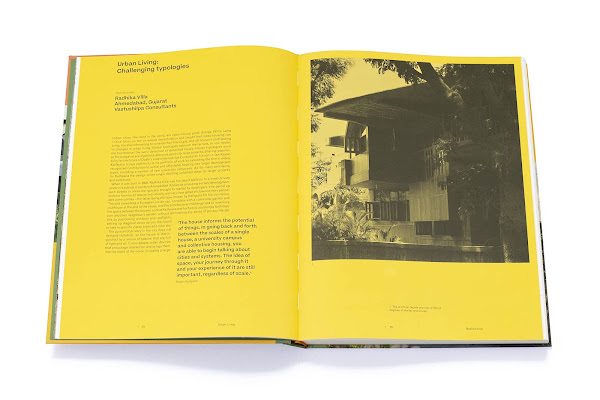 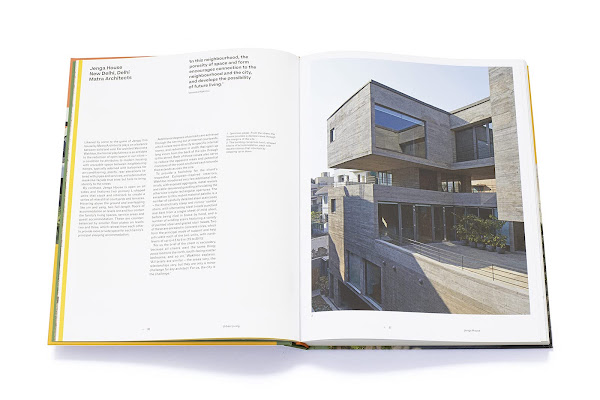 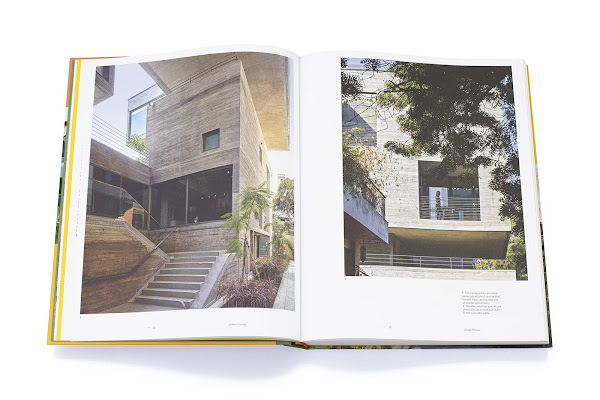 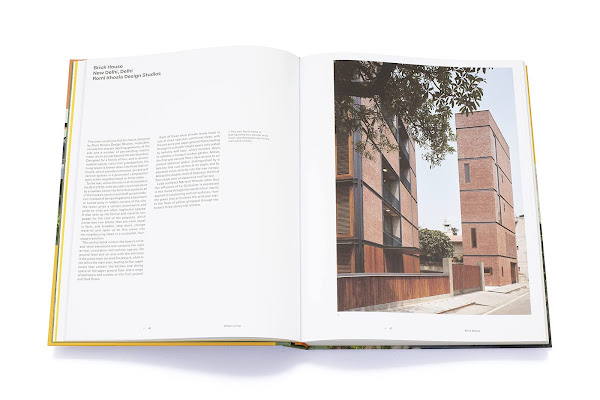 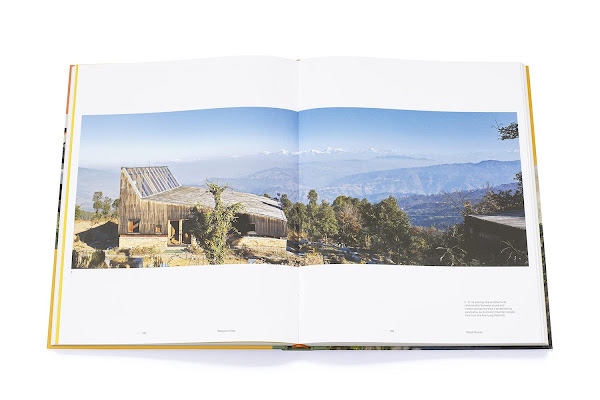