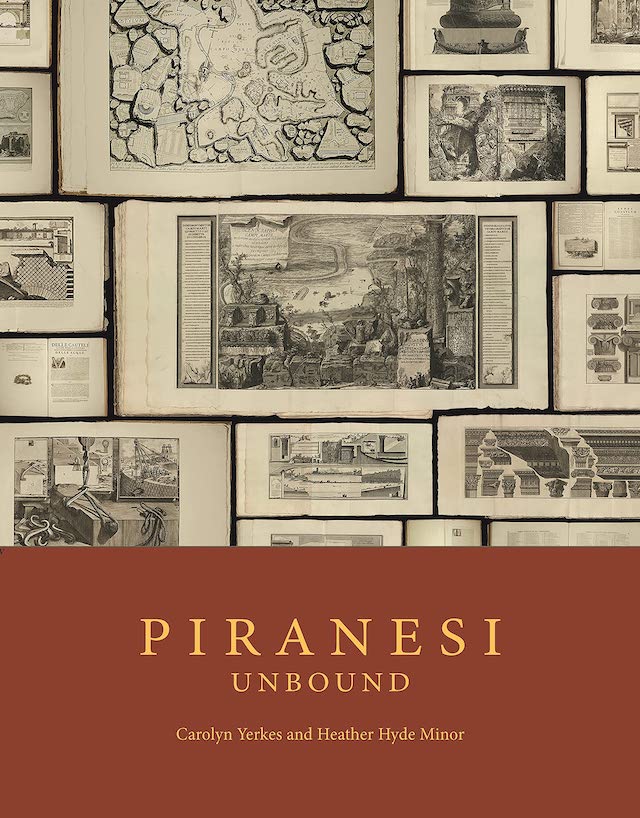 PUBLISHER'S DESCRIPTION:
A draftsman, printmaker, architect, and archaeologist, Giovanni Battista Piranesi (1720–78) is best known today as the virtuoso etcher of the immersive and captivating Views of Rome and the darkly inventive Imaginary Prisons. Yet Carolyn Yerkes and Heather Hyde Minor argue that his single greatest art form—one that combined his obsessions most powerfully and that he pursued throughout his career—was the book. Piranesi Unbound provides a fundamental reinterpretation of Piranesi by recognizing him, first and foremost, as a writer, illustrator, printer, and publisher of books.
Featuring nearly two hundred of Piranesi’s engravings and drawings, including some that have never been published before, this visually stunning book returns Piranesi’s artworks to the context for which he originally produced them: a dozen volumes that combine text and image, archaeology and imagination, erudition and humor. Drawing on new research, Piranesi Unbound uncovers the social networks in which Piranesi published, including the readers who bought, read, and debated his books. It reveals his habit of raiding the wastepaper pile for cast-off sheets upon which to draw and fuse printed images and texts. It shows how, even after his books were bound, they were subject to change by Piranesi and others as pages were torn out and added.
The first major exploration of the lives of Piranesi’s books, Piranesi Unbound reimagines the full range of the artist’s creativity by showing how it is inextricably bound to his career as a maker of books.
Carolyn Yerkes is associate professor of early modern architecture at Princeton University and the author of Drawing after Architecture. Heather Hyde Minor is professor of art history at the University of Notre Dame. She is the author of Piranesi’s Lost Words and The Culture of Architecture in Enlightenment Rome.
REFERRAL LINKS:

dDAB COMMENTARY:
As I've written about books over the years and seen my library grow with books sent to me from publishers and with finds made in used bookstores, I've changed from someone indifferent to books about books to someone with a voracious appetite for them. It's no surprise that I even made a book about books. Some of my favorite books in the genre — or, more accurately I'm guessing, the sub-genre — hone in on particular types of books or specific authors. One of my favorites in this regard is Le Corbusier, Architect of Books, in which Catherine de Smet analyzes the 50-odd books produced by Le Corbusier in his lifetime, seeing the production of them, as the title indicates, as a work of architecture in and of itself. Much in the same vein is Piranesi Unbound by Carolyn Yerkes and Heather Hyde Minor, which was released in September 2020 and is a companion to Piranesi on the Page, an exhibition that was at Princeton University's Firestone Library one year later.
I did not make it to the exhibition, unfortunately, but the book is a scholarly and visually rich history that stands on its own and should appeal to fans of Giovanni Battista Piranesi (1720–1778) and people, like me, drawn to books about books. (While the book is a suitable substitute for the exhibition proper, Princeton does have an online version of the exhibition.) Following an introduction written by both authors, three chapters by Yerkes and three chapters by Minor explore the working life of Piranesi. Although he is known primarily as an architect and archeologist who made prints and drawings of Roman ruins and imaginary prisons, the authors/curators focus on Piranesi as a maker of books. Accordingly, the six chapters move across the process of bookmaking, from "Layers," "Lost and Found," and "Pages" to "Dedicated and Sent," "Bound," and "Sold." Most fascinating is "Lost and Found" by Yerkes, which builds upon the "Layers" chapter by Minor to reveal how Piranesi reused sheets of paper that surrounded him in his studio, enabling the authors to piece together a title page for a "lost" book (see first spread, below).
Understanding how the pages and images of the lost title page related to each other, among other parts of Yerkes's and Minor's book, meant delving into the 18th-century production of books generally and Piranesi's dozen books specifically. As such, Piranesi Unbound is full of painstakingly researched details, some of which are obsessive at times but, from an academic perspective, are extremely valuable in collecting disparate information gathered from dispersed archives. Take chapter five, "Dedicated and Sent" by Minor: most of its pages are devoted to a list of "all known copies of the Lettere [di giustificazione scritte a Milord Charlemont," all of them inscribed by Piranesi, like this one at the National Gallery of Art. Following the eleven-page list is the book's only gatefold, a presentation of 36 dedication pages (fourth spread) in as many collections around the world, from the Avery Architectural and Fine Arts Library in New York to the American Academy in Rome.
Piranesi Unbound opens with the same dedication — a serpent biting its tail, intertwining with the implements Piranesi used in his many pursuits, an illustration the authors call "a kind of self-portrait" for Piranesi — but the inside is blank. At the back of the book, at the end of the acknowledgements, the authors reveal how they borrowed the dedication from Piranesi but intentionally left its middle blank, providing it "for our readers to complete." Readers who made it through the book's chapters will certainly understand and appreciate the inclusion of this illustration, though I'm not sure how many will take a Sharpie to such a beautiful book about books.
SPREADS: 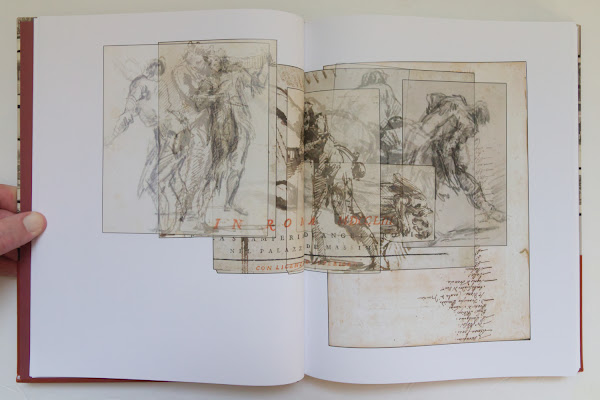 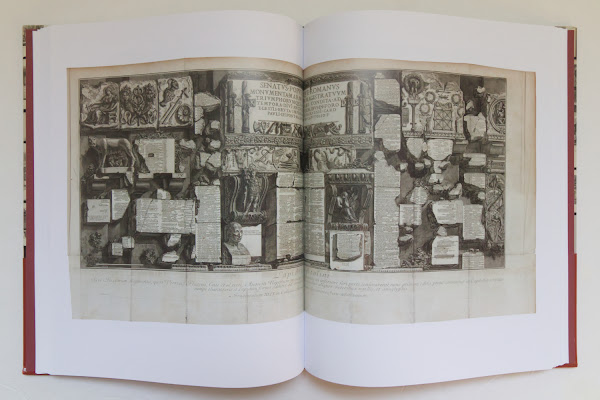 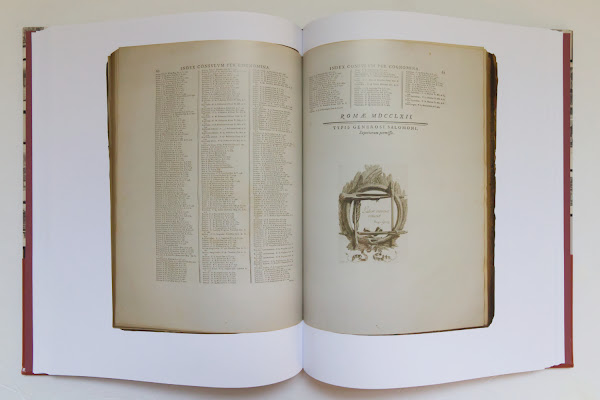 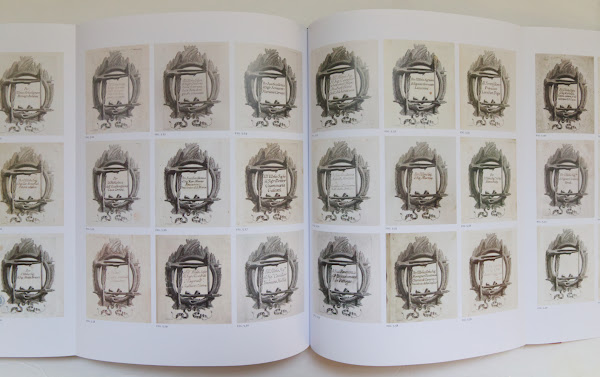 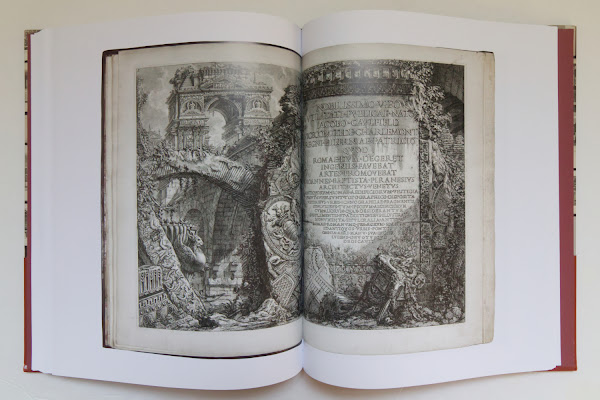