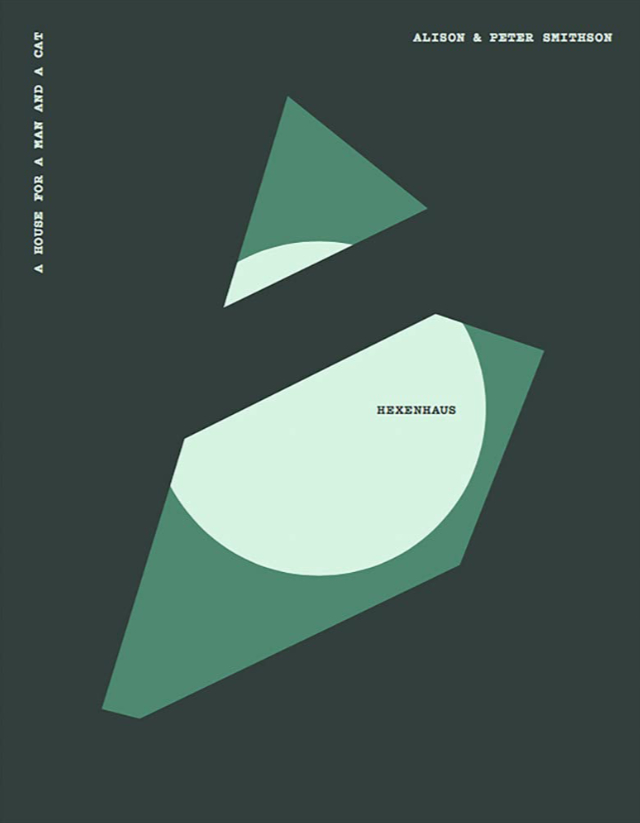 Alison & Peter Smithson: Hexenhaus: A House for a Man and a Cat
Edited by A&P Smithson Hexenhaus-Archiv
Walther König, November 2021

PUBLISHER'S DESCRIPTION:
In 1984, German furniture-maker Axel Bruchhäuser reached out to architectural duo Alison (1928–93) and Peter Smithson (1923–2003) with a playful letter ostensibly written by his cat and addressed to theirs. The letter between cats inquired about commissioning the Smithsons to build several lookouts on Bruchhäuser’s home, known locally as the “Hexenhaus” (the “Witches’ House”—a common name in the area where the Brothers Grimm wrote their fairy tales). Started in 1986 and completed in 2001, and located in a dense forest in Hessen, the renovation that the Smithsons undertook constituted an example of what they called “law of the conglomerate.” Step by step, the house was expanded and opened to admit the light as well the trees, which became part of the interior. The house’s primary materials are wood and glass, providing a poetic example of latticework and a stunning use of natural light.
REFERRAL LINKS:

REVIEW:
Of the few buildings attributed to husband-and-wife architects Alison and Peter Smithson, Hexenhaus is little known, especially compared to their earlier Hunstanton School (1954), The Economist Building (1965), and Robin Hood Gardens (1972, demolished 2017–19). Hexanhaus is not included in the Smithsons' Wikipedia profile, and though I'm far from an expert on the Smithsons, I had never heard of the project before receiving this book from publisher Walther König. Compared to those earlier projects, which are masterpieces of modern and brutalist architecture in the UK, Hexenhaus — located in a German forest that was the setting of Grimm Brothers' fairy tales and appropriately translates as "Witch's House" — is idiosyncratic, made up of additions to and renovations of an existing house that were carried out between 1984 and 2020. Modifications to the house and forested property owned by Axel Bruchhäuser were carried out by Alison until her death in 1993, continued by Peter until his death in 2003, and then resumed a decade by their son, Simon, who is also an architect. A plan dated 2020 in the book locates no less than 31 interventions carried out over nearly 40 years. 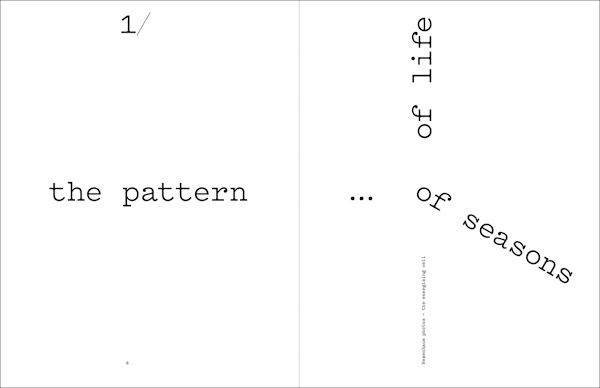 Alison & Peter Smithson: Hexenhaus opens with a few of the many beautiful photographs of the project taken by HGEsch, but then it is followed by an oddity, a letter apparently written from one cat to another: from Sir Karl, the cat of Tecta founder Axel Bruchhäuser (Karl's "butler"), to Snuff Smithson, the feline of Alison and Peter. Karl wanted two lookouts, one for him and one for "Mr. Steven Squirrel (to look for mouses [sic] and to smoke thick cigars, thinking on Mies)." Snuff replied to Karl and with that the relationship between their human counterparts began. The interventions started with "Axel's Porch" at one corner of the square plan and then continued with the "Riverbank Window," "Hexenhaus Holes," and the "Hexenbesenraum"; the last started before but completed after Alison's death. The names indicate the relatively minor nature of the interventions but also their aim: opening up the house to nature -- to the forest and sunlight surrounding the house. Simply put, Axel and his cat were too closed off from the outside in the existing house. 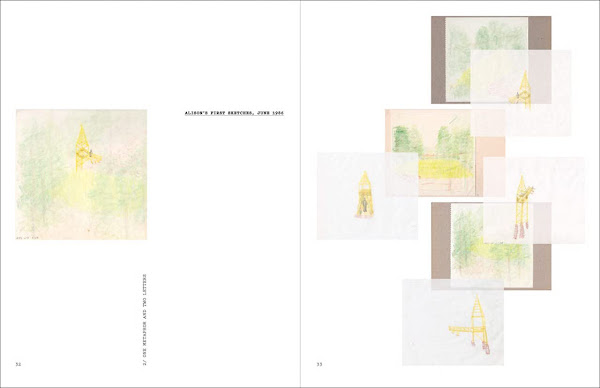 A series of floor plans on pages 46 to 53 illustrate the layering of the interventions over the existing house and the adjacent landscape. The plan dated 2020 (below) is most revealing, showing walkways branching off to a lookout, room, and pavilion; windows appearing to explode out of the square box that is the original; and a variety of overlapping furnishings occupying the house itself. It is the type of project that can only unfold through a slow, methodical observation of the house and site, on the part of both the owner, who lived in the house before the Smithsons were involved, and the architects, who made numerous visits to the Black Forest where Hexenhaus is located. Coming late in the lives of Alison and Peter, both of whom dedicated the last decade of each of their lives to the project, Hexenhaus was free from the theorizing found in the three buildings mentioned above, each of which can be considered built manifestos of modernism and brutalism. Hexenhaus is, if anything, Surrealist, commencing with a correspondence from a cat and evolving on-site from its arrangement of parts and the changing desires of its occupants, human and feline alike. 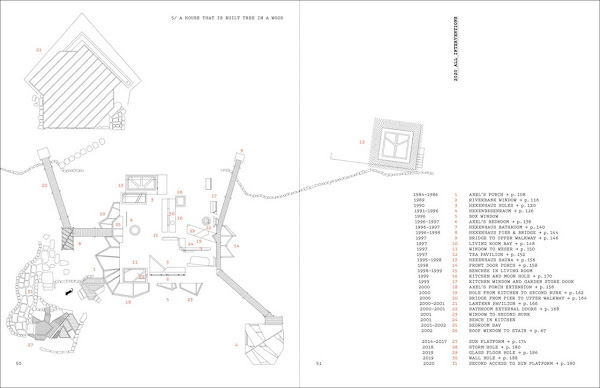 The story of Hexenhaus is told in the book's fourteen chapters through drawings, sketches, photographs (new and archival), essays (notably one by Maddalena Scimemi from 2004 and a new one by Ana Ábalos Ramos) and archival texts by the two Smithsons. Together, chapters eight and nine — respectively "Layers and lattices" and "Fold up, cut up and so on..." — comprise about a third of the book, documenting the interventions carried out from 1983 to 2003 and then from 2003 to 2019. These two chapters are in chronological order, which is helpful in grasping the evolving project, regardless that a number of the photos are contemporary and therefore show later interventions alongside them. Aiding the reader's spatial understanding of the project is the 2020 floor plan (above), which lists each of the 31 labeled interventions and keys them to the documentation in chapters eight and nine. This sort of cross-referencing is frustrating when omitted in books but helpful when included — especially here, with a project that cannot be captured in one "overall" photograph and that entails numerous media and means of documentation to fully explain. 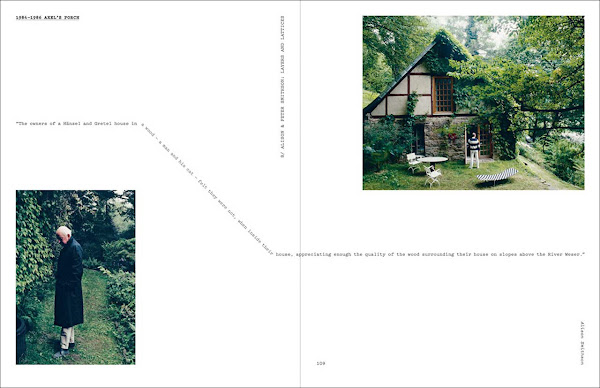 From the articulation of the window frames to the forms of the walkways and freestanding additions, the "language" of the interventions is angular, breaking from the original box in a manner such that new cannot be confused with old. Those angles appear to have dictated the graphic design of the book, with quotes and other statements snaking across the page as if the floor plan jumped into the page layout. Text at an angle would be arbitrary in any other book, but here it is justified, linked to the project formally and occasionally corresponding to images themselves, as in the spread below. The idea of "layering" is found in the covers, all three of them: a thick light-green bound cover, a lightweight medium-green paperback wrap with a circular opening, and then a second, heavier paperback wrap in dark-green with angular cutouts; one of the cutouts is found inside the book, as a bookmark that resembles a postcard, complete with cat-like stamp. For the adventurous, the back cover features a cat and feet with the instructions "Push out and put up." Doing so will give readers their own "cat" and bring them further into the realm of Hexenhaus. 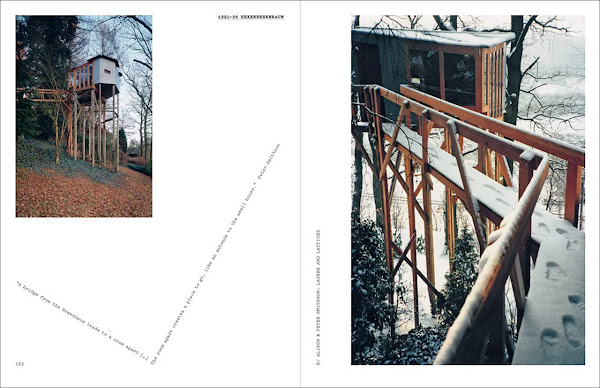