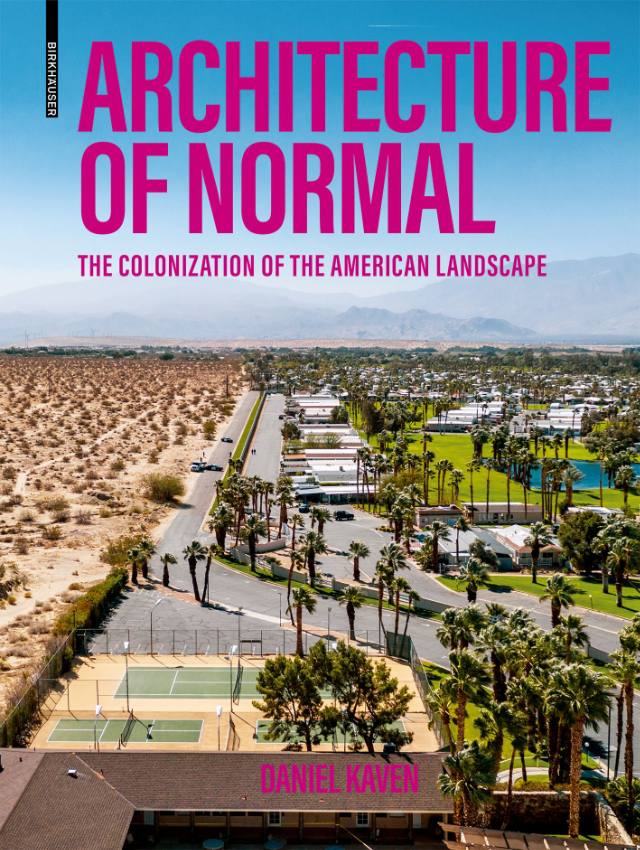 Architecture of Normal: The Colonization of the American Landscape
Daniel Kaven
Birkhäuser, February 2022

PUBLISHER'S DESCRIPTION:
A multimedia exploration of the morphology of architecture in the American Southwest as defined by evolving modes of transportation. In examining advances in transportation, the book asks how we have come to acquiesce to the monotonous, isolating, and aesthetically bankrupt landscape of suburbia. It also casts predictions about how the future built landscape will look as it continues to adapt to patterns of human movement.
Daniel Kaven is an architect and artist in Portland, Oregon. He is a founding partner in the office of William / Kaven Architecture.
REFERRAL LINKS:

REVIEW:
On page 244 of Architecture of Normal, in a chapter devoted to cars, architect and artist Daniel Kaven asserts, "Derivatecture had fully arrived." Apparently a neologism of Kaven's and a portmanteau of "derivative" and "architecture," "derivatecture" refers to buildings that are replicas of older buildings. Kaven first mentions the term in an early chapter about his upbringing in Albuquerque, New Mexico, when a younger he noticed that a black-glazed building not far from his home was "an exact replica of an office building that was already standing in Texas." Such an example is quaint compared to the "fully arrived" derivatecture mentioned in the cars chapter: the Alamo Plaza Motor Courts that resembled their namesake. Kaven describes those "mimetic buildings" as the concept for the "hamburger stands, diners, drive-in movies and coffee shops" that would pepper the United States. The "architecture of normal," it appears, is one of branding and communication enabled by the automobile and other modes of transportation over the course of centuries. 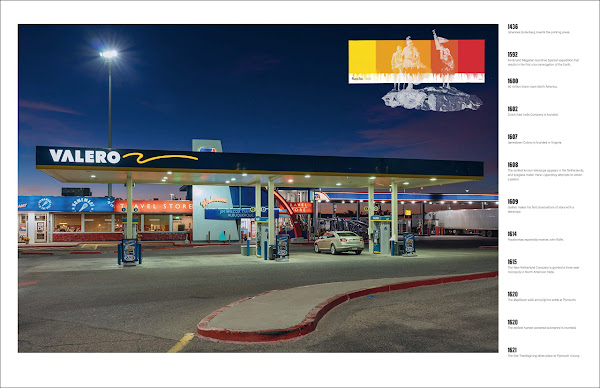 Fittingly, the "Cars" chapters is the longest of the book's six transportation-related chapters, following "Humans," "Horses," and "Trains," and preceding "Airplanes" and "Rockets." There is a clear chronological progression to the chapters, one that traces the physical history of the United States from Native American building complexes in the Southwest around 1500 years ago to the present and billionaires building rockets that take off from spaceports in the same part of the country. Although there is a certain linearity to the technological progress captured in the chapters, no single technology has reshaped — and continues to reshape — the American landscape more than automobiles. The optimistic futures of GM's Futuramas and Frank Lloyd Wright's Broadacre City have not come to pass, but the climate-changing impact of dispersed settlements and long commutes brought about by car dependence ultimately defined the US and established our current century's main task: survival. In such a context, derivatecture seems insignificant. 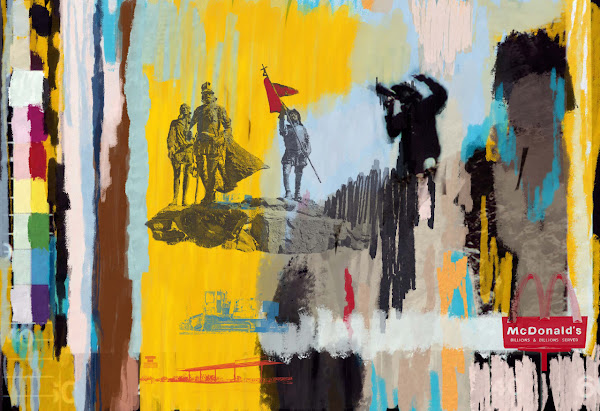 Kaven's history of "the colonization of the American landscape" is told in words, images, and a timeline. These three components mix on the pages, with images — most of them archival but quite a few photographs by Kaven himself as well as his own digital collages — afforded the most real estate. The text gives a chronological history of the United States that can best be described as textbook, touching on events that any student of American history knows about. Kaven discusses the impact of the G.I. Bill and soldiers returning after World War II, for instance, but then includes information more relevant to architects than the broader public, such as the Case Study House Program run by Arts & Architecture. Yet, alongside Julius Shulman's photographs of the Case Study Houses is an excerpt from an essay, "Future Cities: A Challenge," by critic Simon Eisner that ran in the magazine in 1945. Rather than single-family houses, Eisner promoted "rebuilding of our cities [...] to overcome the necessity for this unplanned decentralization." Prescient words, though not as impactful at the time as Levittown and images of suburban families grilling in the backyards. 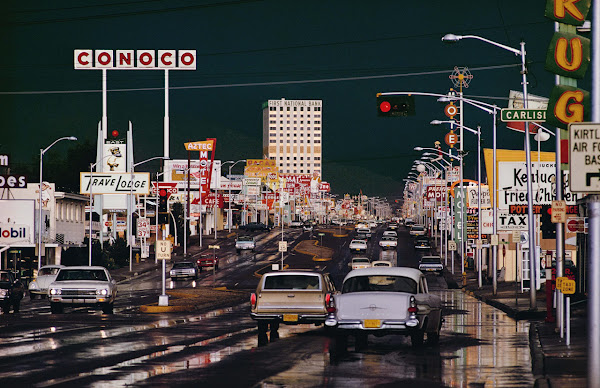 The timeline that accompanies the text and images adds a layer of information to the textbook history, one that enables events outside of the United States to be mentioned but for the most part stays centered on developments in the US and the American West. The timeline, which is at the bottom of most pages, is out of step with the chronological text (aligning them would have been a feat), so the dates can't really be read at the same time as the text, lest they distract from Kaven's narrative. Although the history is, again, textbook, Kaven's most pronounced departure from such an approach happens in the early chapters, where the Native American experience is afforded more room than many histories — compared with the ones I remember from school, at least. Furthermore, Kaven's digital collages tend to juxtapose archival images of tribal members with the products of "the colonization of the American landscape": highways, single-family houses, derivatecture. Such images set up simple dichotomies to complex histories and appear prone to mythologizing, but I found them to be visually appealing additions to the hundreds of archival images. 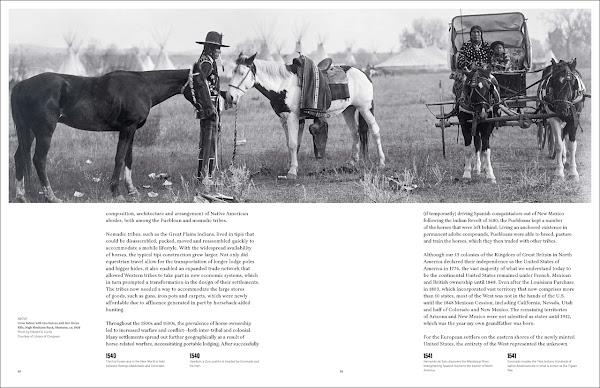 With a book full of centuries of facts (this isn't to say Kaven doesn't opine, though he saves most of it for the prophetic "Cibola" chapter at the end of the book), I found it odd that the book has no references, no bibliography. Passages quoted at length, such as Eisner's essay from Arts & Architecture, indicate their source, at least to some degree, but for the most part the reader is encouraged to accept that all of the statements Kaven makes are true. Given the preponderance of information that is common knowledge, references are hardly needed, though occasionally I found myself questioning certain assertions. In the chapter on cars, for example, Victor Gruen is described as "a socialist architect," not something I knew from histories of American architecture and urbanism. Yet a quick Google search points to at least one article that does corroborate such a label. Still, in the cursory presentation of Kaven's book, the term "socialist architect" is distracting yet also accurate in the way it captures the unfulfilled goals of Gruen's suburban community centers, where shopping was just one element in a mixed-use pedestrian area. 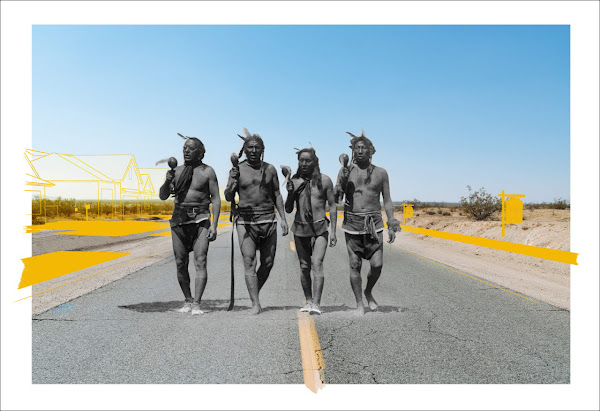 Lastly, I want to mention the design of the book, which was done Kaven. The pages that mix text, images, and timeline (second-to-last spread) are consistent, with images across the top half, one column of text at the bottom, image captions in the white space beside the text, and the timeline at the very bottom. That consistent format is broken up frequently by two-spread images with archival photos, Kaven's photos, or Kaven's collages, giving the book a rhythm and making it a fairly brisk read. Jumping around in book, rather than reading it cover to cover, made me wish for chapter designations on the pages. Looking up the instances of "derivatecture" in the index pointed me to page 365, for example, but what looked like the "Cars" chapter, with an aerial photograph of a shopping center parking lot, turned out to be the "Airplanes" chapter. A graphic designer specializing in books and having an awareness of how people use them would have designed the book differently. But for Kaven, an architect and artist, the design foregrounds the images, turning his history of the American landscape into a story best told visually.
FOR FURTHER READING:
Email Post
Labels: birkhauser