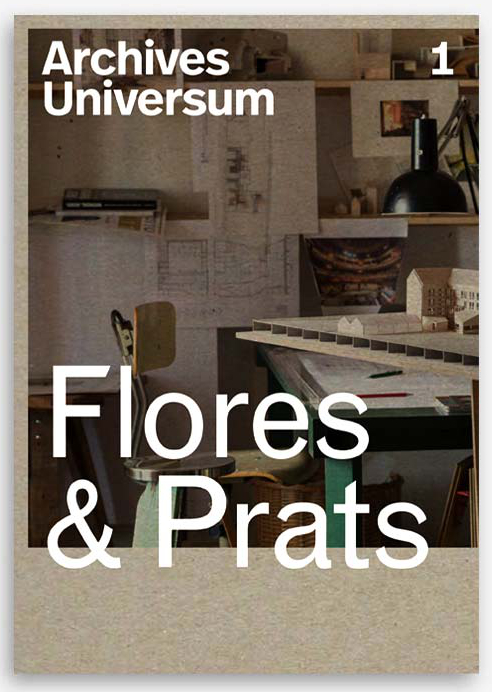 BOOK DESCRIPTION (via Flores & Prats):
Archives-Universum is a line of publications by C2C, arising after years of visiting different architects’ studios and noticing how life intermingles with work. Universum represents the awareness of how intense and interesting their work becomes, and the need to explain it in detail, to share it.
Universum seeks to document a specific moment, providing a portrait of work-life spaces and adding an explanation of the projects that are underway at that moment in the studio, believing that they will be significant to its future. The narration of each Universum is two fold: a photographic one in which the images are shown, joined or cut, to offer unitary or multiple visions; and another written one that gathers texts that can explain that process of work and life to which other authors join in where necessary arguments are produced, or some projects are explained.
This first issue is dedicated to the architects Flores & Prats, with photography by Juan Rodríguez, texts by Carlos Quintáns, and graphic design by Hans Gremmen.
Archives Universum 01: Flores & Prats can be purchased at Idea Books.
REVIEW:
On a recent trip to Barcelona (my first!) to cover the EUmies Awards Day for World-Architects, I was fortunate to meet architects Ricardo Flores and Eva Prats and visit their studio on Carrer de Trafalgar. My first in-person exposure to their work was at the 2018 Venice Architecture Biennale, where they contributed two pieces: one of the Vatican Chapels installed on the island of San Giorgio Maggiore; and the Liquid Light installation in the Arsenale, where a full-scale mockup of a portion of the Sala Beckett theater was accompanied by abundant "back-of-house" drawings and models revealing their design process. The second of these made me most excited about their work, and when the trip to Barcelona beckoned and with it the opportunity for a (forthcoming) "studio visit" article on World-Architects, Flores & Prats jumped to the front of my mind. 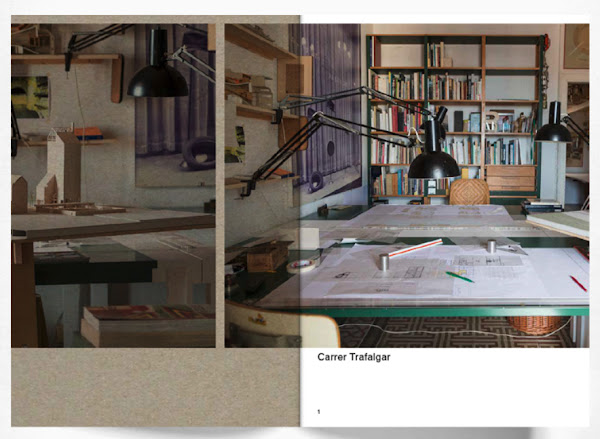 A visit to their studio did not disappoint. Even before stepping foot into the building on Trafalgar and taking the cage elevator to the top floor, I got a sense of their workspace through this book devoted to Flores & Prats and the different spaces where they work, including Trafalgar but also La Favorita, an in-process refurbishment temporarily housing portions of their archive, and their home on Vía Augusta. As the title indicates, this is the first book in the Archives Universum series documenting the spaces where architects work and capturing "how life intermingles with work." The book comes from C2C, the makers of Archives, a twice-yearly journal of architecture that started with a first issue (now in its third edition) being devoted to none other than Flores & Prats. I have not seen any issues of Archives, but the format for this first Archives Universum is commendable, with approximately 90 pages of photographs of the studio spaces split up by two matching chunks of text, the first in English and the second in Spanish. 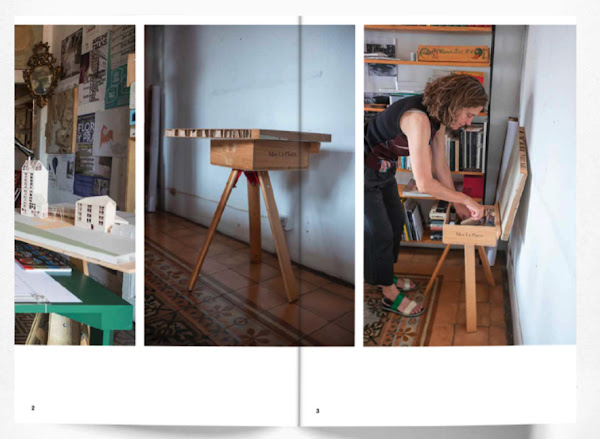 The photographs by Juan Rodríguez are candid, depicting the various spaces of Trafalgar, Favorita, and Augusta, but also capturing Flores, Prats, and an occasional employee working or sharing some aspect of their work-life. Books play an important role in their office, for instance, so we see Prats taking a book off the shelf, confident that it we will hear about it discussed in the text. On another page she gestures at a small stand on a drafting table, where a model sits at eye level for ease of drawing parts of the model's interior, as we learn about in the text. The strongest qualities that come across in the photos, especially in those of their Trafalgar studio, as in the spreads above, are the density of the objects on display and the consistency with which their archives are documented. It seems like drawings, models, books, and binders are displayed in each room rather than stored away, and all are titled using the same stenciled text, be it a model box in a corridor or dozens of sketchbooks with yellow binding. Their architectural aesthetic, for lack of a better term, is pervasive, making them a fitting subject for a series on life intermingling with work. 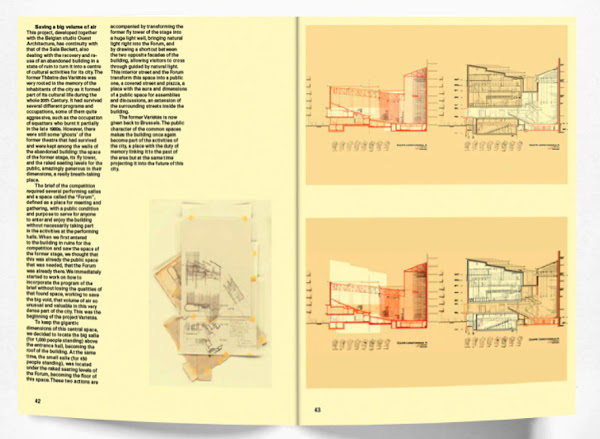 The texts that are gathered on yellow paper in the middle of the book consist of firsthand impressions by Carlos Quintáns of the three places as well as short essays by the two partners in work and life; the distinction between the two is clearly done through design, with the former in larger text on two-column layouts and the latter in smaller text with three columns per page. The essays by Flores and Prats range from one devoted to a project underway in Sweden and another in Brussels, to a pair on the importance of hand drawing and the reuse of existing buildings. These last two come to the fore in their studio, which is set up for hand drawing and model building more than digital drafting (most employees were building models on my visit, with computer workstations empty save one) and is actually an old apartment that has been lovingly retrofitted by the duo, complete with original fittings, loose floor tiles, and physical remnants of previous uses. So, while "life intermingling with work" clearly comes across in Archives Universum 1, so does the way the architecture of Flores & Prats — renovations, mainly, that exhibit the layers of new and old in way that distinguishing them is difficult — is rooted in the spaces where they work.
FOR FURTHER READING:
Email Post
Labels: c2c