Between Memory and Invention 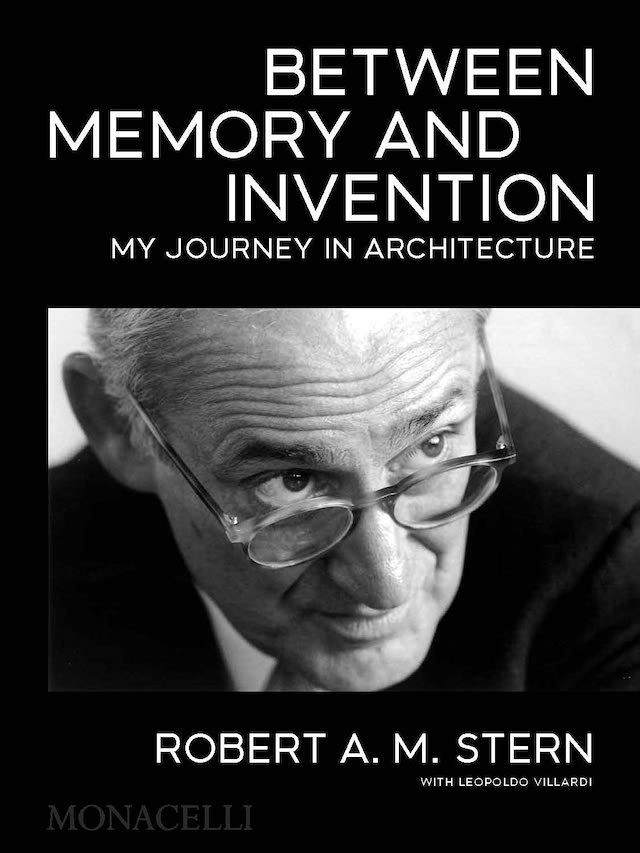 Between Memory and Invention: My Journey in Architecture
by Robert A. M. Stern, with Leopoldo Villardi
The Monacelli Press, March 2022

PUBLISHER'S DESCRIPTION:
For more than fifty years, Robert A. M. Stern has designed extraordinary buildings around the world. Founding partner of Robert A. M. Stern Architects (RAMSA), Stern was once described as “the brightest young man I have ever met in my entire teaching career” by Philip Johnson and recently called “New York City’s most valuable architect” by Bloomberg.
Encompassing autobiography, institutional history, and lively, behind-the-scenes anecdotes, Between Memory and Invention: My Journey in Architecture surveys the world of architecture from the 1960s to the present and Robert A. M. Stern’s critical role in it. The book chronicles Stern’s formative years, architectural education, and half-century of architectural practice, touching on all the influences that shaped him. He details his Brooklyn upbringing, family excursions to look at key twentieth-century buildings, and relationships with prominent teachers — Paul Rudolph and the legendary Vincent Scully among them. Stern also recounts the origins of RAMSA and major projects in its history, including the new town of Celebration, Florida, the restoration of Times Square and 42nd Street, 15 Central Park West, Benjamin Franklin and Pauli Murray Colleges at Yale, and the George W. Bush Presidential Center, as well as references the many clients, fellow architects, and professional partners who have peopled his extraordinary career.
By turns thoughtful, critical, and irreverent, this accessible, informative account of a life in architecture is replete with personal insights and humor. Stern’s voice comes through clearly in the text — he details his youthful efforts to redraw house plans in real estate ads, his relationship to Philip Johnson, which began at Yale and was sustained through countless lunches at the Four Seasons, his love of Cole Porter and movies from the 1930s and 1940s, his struggle to launch an architecture practice in the 1970s in the midst of a recession, and his complex association with Disney and Michael Eisner.
Unsurprisingly, New York City plays a big role in Between Memory and Invention. Stern has a deep commitment to the city and recording its past — he is the lead author of the monumental New York book series, the definitive history of architecture and urbanism from the late nineteenth century to the present — and shaping its future. Though now a global practice, RAMSA residential towers rise throughout Manhattan to enrich the skyline in the tradition of the luxurious apartment buildings of the 1920s and 1930s.
Supported by a lively mix of images drawn from Stern’s personal archive and other resources, this much-anticipated memoir is interspersed with personal travel slides, images of architectural precedents and the colleagues that have shaped his thinking, and photographs of the many projects he discusses. With a thoughtful afterword by architectural historian Leopoldo Villardi that delves into Stern’s process of putting together this extraordinary autobiographical work, Between Memory and Invention is a personal candid assessment of a foremost practitioner, historian, instructor, and advocate of architecture today.
Robert A. M. Stern is the founder and senior partner of Robert A. M. Stern Architects. [...] a Fellow of the American Institute of Architects, and in 2017 received the Topaz Medallion, [...] served as Dean of the Yale School of Architecture from 1998 to 2016 [... and] he is the lead author of the monumental New York series documenting the architectural and urban development of the city over the past 150 years and more than twenty other books. Leopoldo Villardi is an architectural historian and a research associate at Robert A. M. Stern Architects.
REFERRAL LINKS:

REVIEW:
Robert A. M. Stern is exceptional, in my mind, for the way he has managed to take on many different roles and produce many different things — all at an equally high level of quality and intensity. He is an architect who can boast of one of the most successful practices in New York City, due in large part to a spate of luxury apartment buildings but also universities, public buildings, and other projects well beyond Manhattan. He is a historian and author, but not one with the occasional essay here and there; he has written around ten books (books beyond RAMSA monographs, I should note), some of them substantial tomes and partially listed at bottom. And he is an educator, but beyond the teaching that many architects undertake, he notably served as dean of Yale's School of Architecture for nearly twenty years: from 1998 to 2016, succeeding Fred Koetter and preceding Deborah Berke. For sure, he has not donned those hats alone — his eponymous firm is 200 strong and many of his books are written with other scholars — but somehow Stern has managed to corral the efforts of those around him into a substantial and diverse body of work bearing his name; one that, in the retrospective glance afforded by this autobiography, has clearly made a stronger stamp on American architecture over the last half century than most other architects. 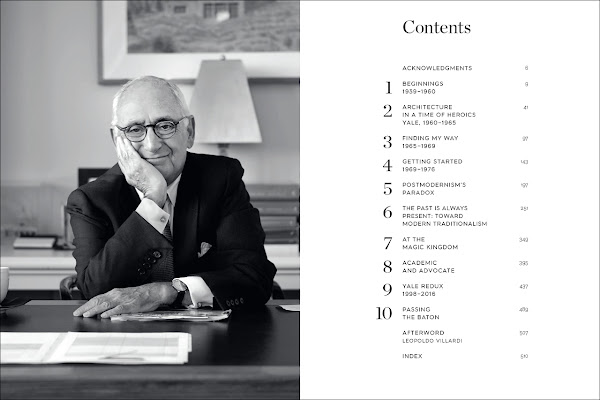 Between Memory and Invention, written with RAMSA associate Leopoldo Villardi, is another substantial book by Stern — not a tome like each book in the New York series or Paradise Planned, but a heavy book with glossy pages, lots of color photos, and plenty of footnotes. Belying the scholarly nature the person Philip Johnson advised at Yale to become an architectural historian, the book is fairly laid back, conversational in tone and even gossipy at times. It's a life story being told like a story, from Stern's upbringing in Brooklyn to — ten chapters later — the architect "passing the baton" to his fellow partners, associates, and the younger generation at RAMSA. The book is basically chronological but not strictly so. While the first four chapters trace Stern's life from 1939 to 1976, moving from Brooklyn to Yale to New York City, the balance of the book's chapters are thematic, fitting into Stern's timeline but also veering back and forth as needed. Chapter six, for examples, focuses exclusively on Stern's practice, following it from the early houses in the Hamptons to the various large-scale projects RAMSA tackles today. Then chapter eight hones in on Stern's life as an "academic and advocate" over roughly the same timeframe. As someone whose interests veer to architectural criticism, history, and the like (and, to be honest, I've never been a fan of Stern's buildings, regardless of style), I was more absorbed by the parts of Between Memory and Invention that correspond with those parts of Stern's life. 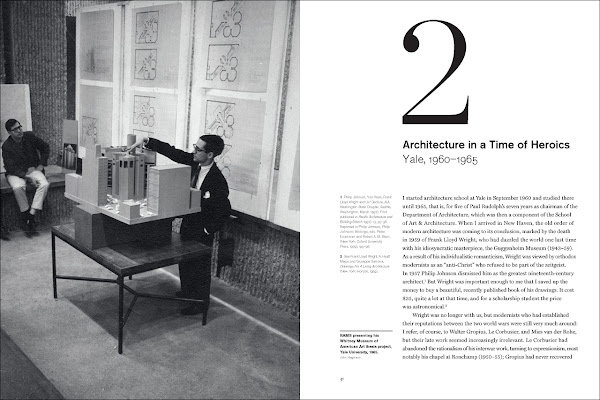 So, what did Stern write, edit, and curate that made him so influential? It all started with the double issue of Perspecta, the student-run journal of the Yale School of Architecture that he edited in 1965, his last year there as a grad student (his undergrad was at Columbia). The most notable contributions to Perspecta 9/10 are Charles Moore's "You Have to Pay for the Public Life" and excerpts from Robert Venturi's then-forthcoming Complexity and Contradiction in Architecture, which was written in 1962 but wouldn't be published by MoMA until 1966. These two pieces, accompanied by projects in addition to their texts, take up about one-third of the 336 page issue, which overall is a reaction against orthodox modernism and is indicative of the fortuitous timing of Stern's education on the hinge between modern and postmodern architecture. Although Venturi's book would come out one year later and Moore's essay would be reprinted in other books, including one of the same name, the large-format double issue remains a desirable artifact for any architect purporting to have a decent library, myself included. 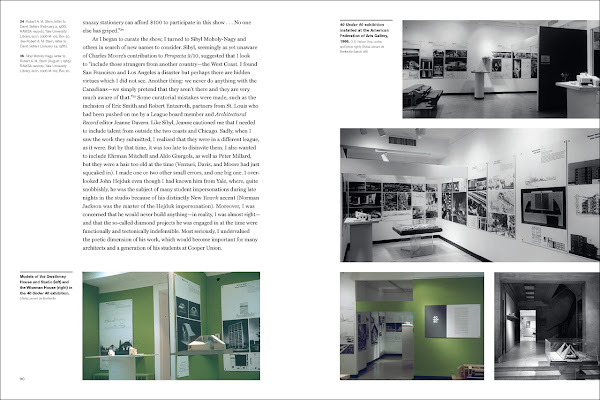 Stern's embrace of alternatives to modern architecture would lead him to eventually edit such publications as a special edition of A+U in 1981, American Architecture: After Modernism, and to be involved in, among other things, both the 1976 Venice Biennale, when architecture made a tentative entrance into the exhibition, and the first Venice Architecture Biennale in 1980, when Paolo Portoghesi lined the Arsenale with facades designed by Stern and other postmodern architects. Before these undertakings, immediately after graduating from Yale, Stern served as the inaugural J. Clawson Mills Fellow at the Architectural League of New York, at the prodding of Philip Johnson, whom he befriended while at Yale. Influenced by George Howe, whom he studied at Yale and would eventually write a book about, Stern resurrected the format of Howe's 40 Under 40 exhibition displayed at the League in 1941, pulling together forty young architects with a "diversity of expression" for the 1966 exhibition and catalog. A few years later came Stern's first book, New Directions in American Architecture, part of a series put out by George Braziller. 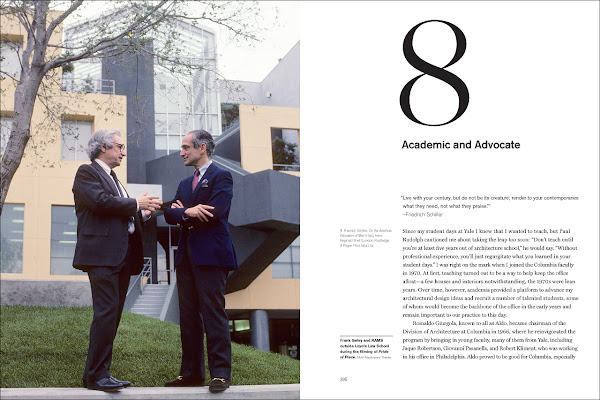 A more pronounced shift toward postmodernism and then eventually "modern traditionalism" occurred in May 1973, when Stern was one of the "Grays" in Architectural Forum's "Five on Five" issue. His contribution, "Stompin' at the Savoye," was one of five articles that countered Five Architects, the 1972 book featuring projects by Peter Eisenman, Michael Graves, Charles Gwathmey, John Hejduk, and Richard Meier, with an introduction by Colin Rowe; according to Stern, his essay "raised the most hackles." The hackle-raising nature of Stern's criticism — combined with his strong network of social and professional connections — made him the suitable choice for a PBS documentary series that aired in 1986. Pride of Place: Building the American Dream, with its companion publication, was Stern's "personal view" of American architecture more than an objective overview of the same; it is also one of the rare TV series devoted to architecture, a subject barely on the radar of even the most educated watcher of public television. Other publications include, most notably, the New York series documenting New York's architecture and urbanism from the end of the Civil War to 2000 — and finally to the near-present, when a planned sixth one is published as early as next year. 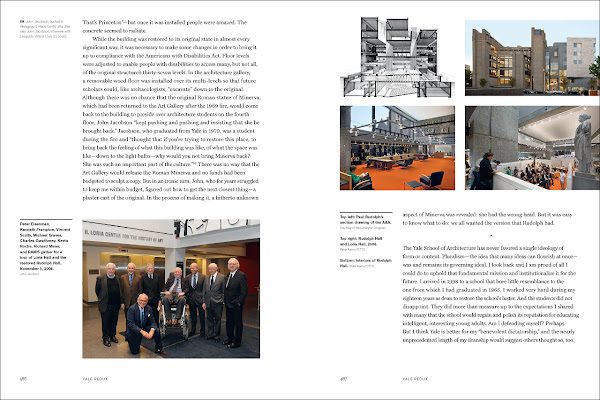 Numerous books, exhibitions, and other output bearing Stern's name or behind-the-scenes imprint are found in Between Memory and Invention, but finding them is another story. If one reads Stern's autobiography from cover to cover as a chronological story with chapters punctuating certain aspects of his prolific professional life, they will learn about them all. On the other hand, using this book as a reference for those pieces means knowing the names of the players involved, since the only index provided is an "index of names." At ten pages long, it's clear that Robert A. M. Stern knows just about everybody worth knowing — and he names them all in the book. But instead of flipping to the back of the book to find the New York books — or some other publication, building, or place where the title is known — one has to know and then look up the names of his co-authors (John Massengale, Gregory Gilmartin, et. al.) to find them in the book. It's a small frustration, given that the thematic chapters in the book make finding things in the text a bit easier, but it's a noticeable omission considering the exhaustive research and organization Stern normally displays in this aspect of his work. Nevertheless, I was pleased to learn a lot about Stern's life story and the outsized influence he has had on much of the wider realm of architectural culture in the United States.
FOR FURTHER READING:
Email Post
Labels: monacelli press