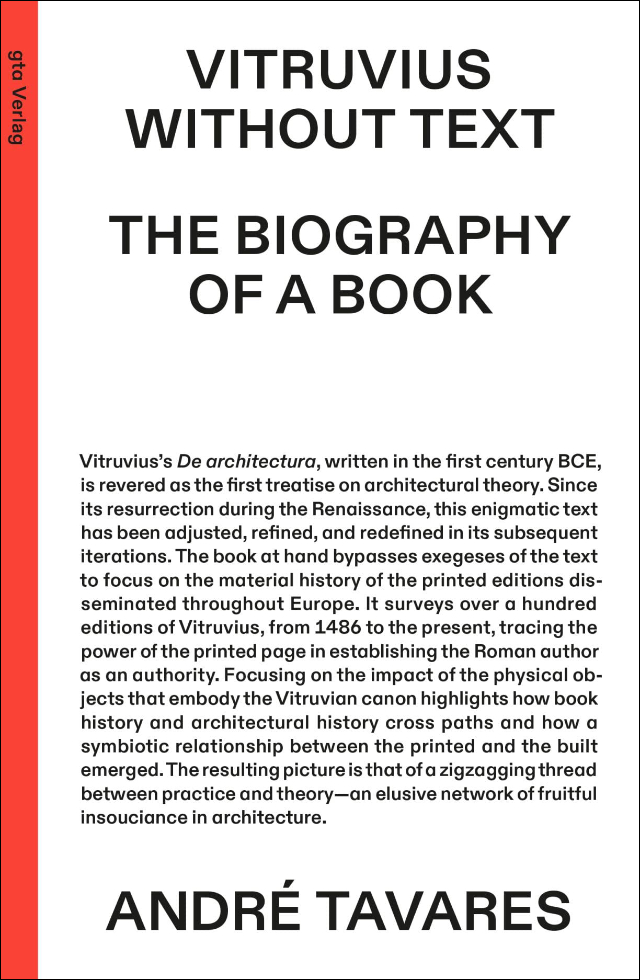 Vitruvius Without Text: The Biography of a Book
by André Tavares
gta Verlag, July 2022

PUBLISHER'S DESCRIPTION:
Vitruvius’s De Architectura, written in the first century BCE, has been revered as the first treatise on architectural theory. Since its resurrection during the Renaissance, the enigmatic text has been adjusted, refined, and redefined in subsequent iterations. This book bypasses exegeses of the text to focus on the material history of the printed editions disseminated throughout Europe. It surveys over a hundred editions of Vitruvius from 1486 to the present, tracing the power of the printed page in establishing the Roman author as an authority. Focusing on the impact of the physical objects that embody the Vitruvian canon, Vitruvius Without Text highlights how book history and architectural history cross paths while illuminating how a symbiotic relationship emerges between the printed and the built.
André Tavares is an architect and founding director of Dafne Editora, an independent publishing house in Portugal.
REFERRAL LINKS:

REVIEW:
Number 26 of Richard Weston's 100 Ideas that Changed Architecture is "Commodity, Firmness, and Delight," attributed to Sir Henry Wotton in his 1624 book, The Elements of Architecture, a "free translation of the Roman architect Vitruvius's De Architectura, now universally known as the Ten Books of Architecture and the only architectural treatise to survive from classical antiquity." In referencing both Vitruvius and Wotton, Weston highlights one of the most important aspects of the Ten Books of Architecture (usually simply called "Vitruvius"): ideas from the text have been carried through to the present by way of numerous translations, editions, and interpretations. The triad of firmness, commodity, and delight — originally firmitas, utlitas, venustas — is the most famous element from Vitruvius's 2000-year-old text, but even it has been subject to the analysis of architects and theoreticians, first in the Renaissance, when the text was rediscovered, and in the half-millennium since. André Tavares's illuminating book examines how Vitruvius has been packaged — and unpacked — from the 15th century to the current day. 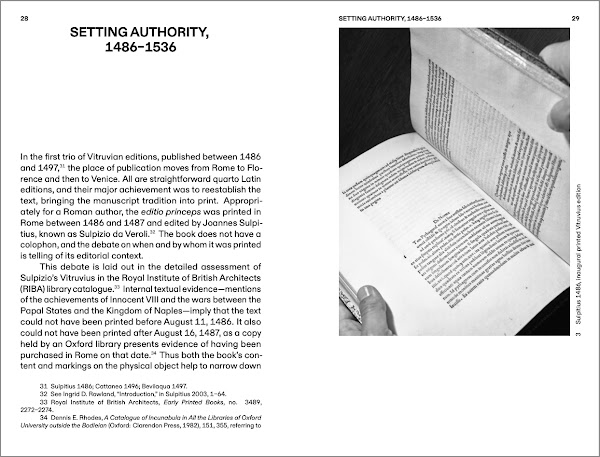 Vitruvius Without Text, which can be read as an open source PDF or in an online format via gta Verlag, consists of two main sections, what could be seen as two books in one: "The Biography of a Book" and "The Tetrastyle Hypothesis." The first is pretty much what it says, but instead of honing in on what was found in Vitruvius's original, the "biography" traces many of the subsequent editions that were made from 1486 to the present. Tavares looks at how the text was translated, how it was laid out on the page, what illustrations were used to accompany the text (the original had none), and even how the books were assembled as objects: their size, paper, print run and distribution, number of volumes, etc. It is a fitting focus for someone whose first book was The Anatomy of the Architectural Book. The second part, though more enigmatic at first blush, takes one passage from Vitruvius's original — the first paragraph from Book VI, Chapter III — and examines how its influence jumped from book to building over time. It's an interesting addition to the biography, since it moves the interpretative stances that were found in the various editions of Vitruvius's text in the other direction, in effect turning the Ten Books of Architecture into a hinge upon which its influence moves repeatedly back and forth. 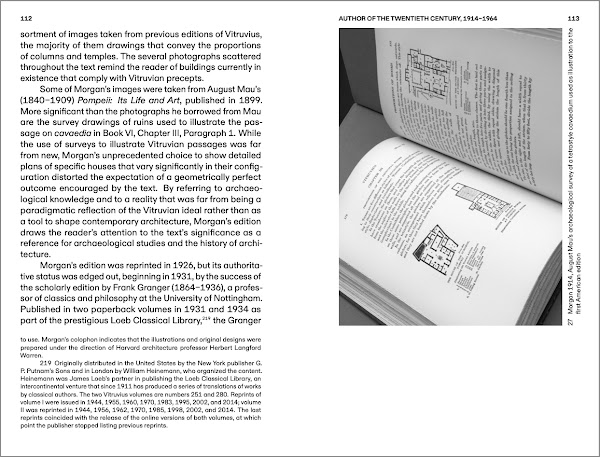 The "Biography" section is organized into seven chronological chapters, each covering roughly a half century or a full century, moving from the 1480s to the present. The cover indicates that "over a hundred editions of Vitruvius" are covered, though more important than quantity is quality. Certain influential editions, in other words, come to the fore in Tavares's text, including Giovanni Giocondo's innovative early edition from 1511, Daniele Barbaro's 1556 edition illustrated by Andrea Palladio, Claude Perrault's annotated French translation in 1673, and Morris Hickey Morgan's 1914 English translation that was the first non-European edition of Vitruvius. Accompanied by photographs of what I hope are the author's hands holding these and other editions of Vitrivius, the biography is an exhaustively researched firsthand account of Vitruvius over time, with at times fascinating details on the century-spanning editions. It's also a bit unwieldy with its many dates, languages, and editors, but thankfully the back matter includes a "Vitruviana" section with side-by-side comparisons of the layouts of important editions (second-to-last spread, below), a comprehensive list of the printed editions of Vitruvius from 1486 to 2016, and maps (last spread) showing the reach of those editions over the same time. 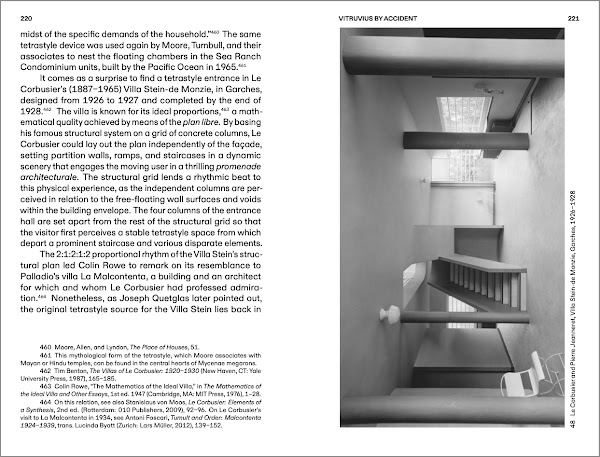 The "Hypothesis" section jumps from books to buildings, looking at how tetrastyle spaces were illustrated in editions of Vitruvius and how architects designed such spaces based on those descriptions and illustrations. In the first section of Book VI, Chapter III, a cavaedium — or atrium in an Ancient Roman house — is defined as of five different styles (Tuscan, Corinthian, tetrastyle, displuviate, and testudinate), with the tetrastyle featuring "girders [...] supported at the angles by columns." Simply put, a tetrastyle is a hall with a central grid of columns that serves to reduce the span of the beams and also defines a central space. Remember, Vitruvius did not have illustrations, so Tavares shows how tetrastyle spaces were illustrated in various ways in the later editions. For example, the 1914 English translation by Morris Hicky Morgan (linked in this paragraph to its online version) features archaeological evidence from houses in Pompeii. Earlier editions incorporated cavaedium that were designed by architects around the time based on descriptions; their designs then influenced how such spaces were described, incorporating, for instance, proportional information that was not in the original. The various proportions and other variations are their own forms of unwieldy in this half of the book, but they are helpfully accompanied by Tavares's illustrations of different tetrastyle spaces and photographs of some built examples. 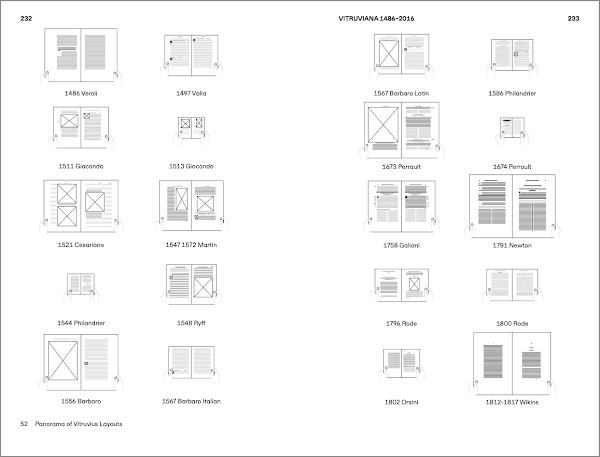 The last chapter before the book's epilogue and back matter is a cursory run through modern examples of cavaedium spaces, or what Tavares calls "Vitruvius by Accident." These range from Berlin subways and Le Corbusier's Villa Stein-de Monzie (spread above), both from the 1920s, to the mid-1960s Berquó House by Vilanova Artigas and Thomas Gordon Smith's aptly named Vitruvius House from 19991. My favorite example, which Tavares mentions but does illustrate as he does with the others mentioned here, is Charles Moore's own house in Orinda, California, where eight recycled wood posts define two spaces in a larger square plan (unfortunately, the house was mangled this century as part of a McMansion expansion). Tavares's point is that, even when architects are not directly referencing Vitruvius (Moore referenced Mayan and Hindu temples when he wrote about it), they are creating spaces and using architectural elements in ways that can ultimately be traced back to Vitruvius. This does not mean that Vitruvius is necessarily the Bible of Western architecture; rather it points to the importance of the architects and scholars who rediscovered and reinterpreted his text centuries ago. The ideas from the original have been transported to the present, but in routes that are far from direct or free from contemporary corrections and realignments. 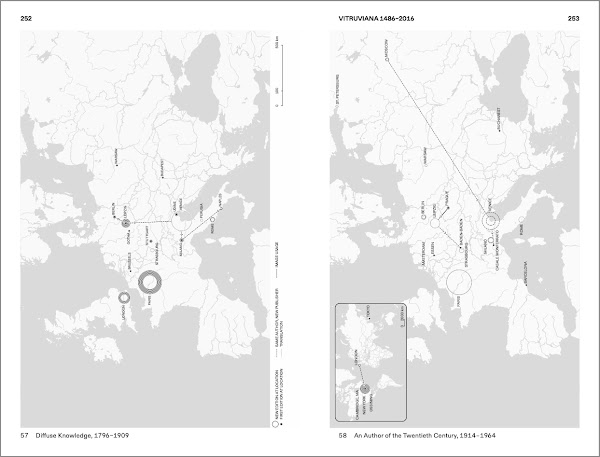