Earlier today when I took a train into the Loop I looked down after exiting through the turnstiles to see a large, colored circle on the floor with the words "kyocera" inside. I've never seen the word before, but I figured it was an advertisement for some product. Mainly I was wondering to what extent is the CTA willing to go for advertising, and is advertising going to help avoid another fare increase, one that has been mentioned by the CTA, even though earlier this year the fare climbed to $1.75 with a $.25 transfer, the same price as New York City which has free transfers on a $2.00 fare.

Later, as I sat on the "L" platform outside the James Thompson Center, I looked up and across the tracks to see billboard after billboard of kyocera ads. Typically advertising on train platforms is limited to designated displays, the ads rotating every month or so. So it was quite a surprise to see about twenty ads extending to the left and the right of the picture below: 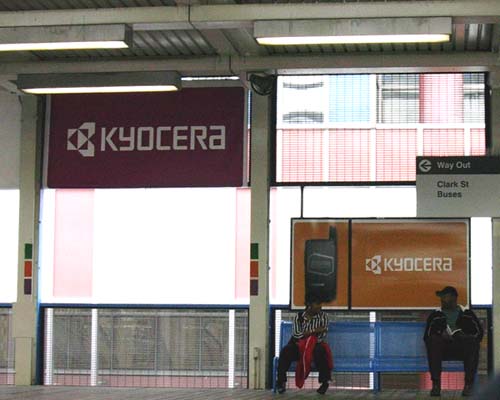 Now, I don't know how recently this happened, or if this is a new trend, or if this is only a special advertising campaign for some new-fangled phone, but I hope it doesn't become the norm. We have advertising on every new bus stop in the city, courtesy of JC Decaux, and have train cars and buses emblazoned with corporate logos; just what we need is more advertising on the CTA.
Email Post
Labels: arch-advertising