I've always seemed to have a sweet spot for the underdog, the little guy. Even in middle school, when faced with the choice of which Canadian province to write a report about, I chose Prince Edward Island, the smallest province in both size and population. Perhaps it's this innate appreciation or curiosity of the small and overlooked that's spurred my interest in Tikopia, a tiny island in the South Pacific that's home to about 1,200 people. 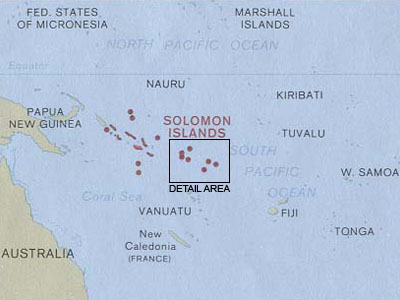 The Solomon Islands is a nation made up of close to 1,000 islands. 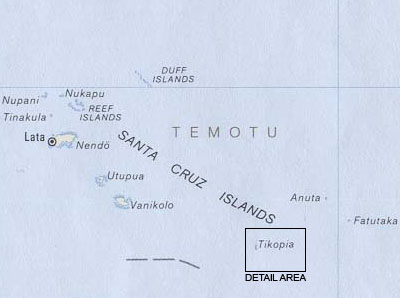 Part of the Solomon Islands are the Santa Cruz Islands. Tikopia lies southeast of these islands, approximately 85 miles from its nearest neighbor Anuta and 140 miles from Vanuatu, the nearest large neighbor (100 sq. miles in area). 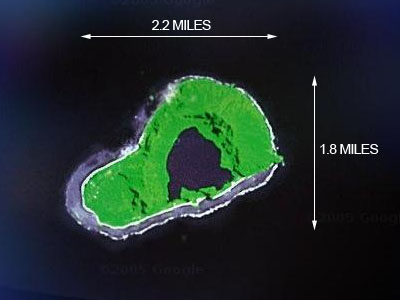 Tikopia's area is approximately 1.8 square miles (though some places indicate it as high as 6 square miles), which means that with 1,200 people it supports a population density of 800 people per square mile. Unbelievably, the island has been occupied continuously for almost 3,000 years.

These tidbits of information in the previous paragraph -- and the direct impetus for my research into Tikopia -- are from Jared "Guns, Germs, and Steel" Diamond's book Collapse: How Societies Choose to Fail or Succeed. It's apparent from the fact that this little island's been occupied for so long -- through climate change, Europeans, and storms (this last one to be touched upon in Part 2) -- that it has "chosen" to succeed. 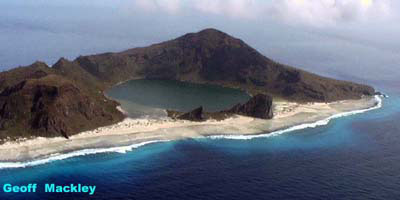 One amazing aspect of the island is that its population has remained relatively constant for its entire history. Blessed with trees and other vegetation that's quick to regenerate, feeding humans and animals was never a problem. All members of society -- from ordinary people to chiefs -- worked together to live sustainably, meaning not placing a burden on natural resources via overpopulation.

Various methods were and are used to keep the population steady: birth control, not having babies too young, extended breast-feeding to reduce additional babies too soon, even undertaking sailing expeditions and other "suicide missions" to "thin out the ranks." The most remarkable method was the removal of pigs around 1600, substituting fishing as a source of food. This accomplished two things: it removed a tasty food source that could raise the island's population too high and it saved a lot of vegetation being eaten by the pigs too fast for regeneration. What's remarkable is that the islanders were able to stop a long-established custom even before something disastrous happened. That would be like Americans giving up their cars before global warming and peak oil gets out of hand, or for Americans to stop eating McDonald's before they have a heart attack. This decision also is remarkable because it involved all members of Tikopia's society, in a combination of what Diamond calls bottom-up and top-down approaches, though this can be partly attributed to the small population and land mass they all share. 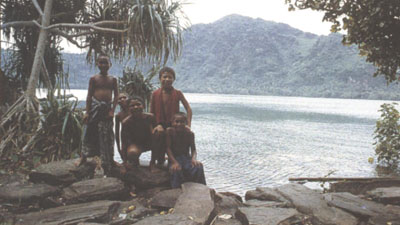 But if we stop for a second and think of Tikopia analogously, maybe there's lessons that can be learned for the rest of the world and the US in particular. If we think of the earth as an island that all humans share -- a huge Tikopia, if you will -- then maybe people would realize their actions affect everybody else, now and in the future, much like the Tikopians were and are aware of their interdependence on each other and the physical island. Their decision-making, especially regarding pigs, was the result of a fairly egalitarian system, even though their societies is headed by chiefs. I find it hard to believe that the same decision could be made in a class system, where those at the top exclude and insulate themselves from those at the bottom, and those in the middle become a sort of buffer between the two.

In Part 2, we'll see how Tikopia and the rest of the world dealt with Cyclone Zoe when it hit the tiny island in December 2002.
Email Post