In July last year I posted about The Manhattan Airport Foundation's absurd proposal to transform Central Park into an airport. Well, that's got nothing on William Zeckendorf's dream airport for New York City, published in the March 18, 1946 issue of Life Magazine. 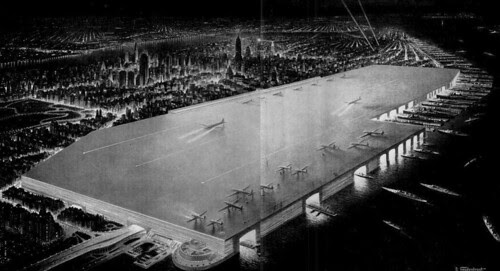 According to the magazine's text (found at Ptak Science Books where I discovered this gem), the airport would have covered 144 city blocks from 24th to 71st Streets and from Ninth Avenue to the Hudson River. (The view above is looking south.) That's approximately 990 acres 200-feet above the streets of Manhattan.

To quote Life, Zeckendorf thinks the $3 billion price tag "can be paid off by rental income within 55 years after the project is completed." Further, and quite optimistically, "although the Manhattan terminal is still in the drawing-board stage and has not yet had approval of New York officials, the planners expect that the increasing tide of air travel will make their idea a necessity." Considering I didn't notice an airport over my head the last time I walked west of Ninth Avenue in Hell's Kitchen, it looks like it wasn't as necessary as the planners imagined.
Email Post