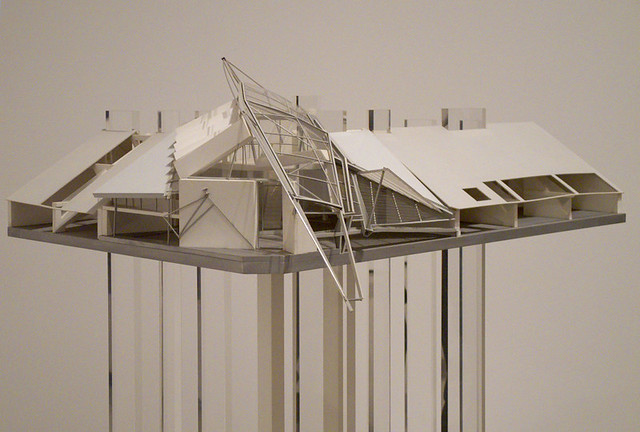 It was 25 years ago this summer that the Museum of Modern Art (MoMA) held the Deconstructivist Architecture exhibition, curated by Philip Johnson with Mark Wigley. The show featured drawings and models for ten major projects by seven architects: Coop Himmelb(l)au, Peter Eisenman, Frank Gehry, Zaha Hadid, Rem Koolhaas, Daniel Libeskind, and Bernard Tschumi. Three have won Pritzker Prizes since 1988, and all are well known now, but at the time they were hardly familiar names. 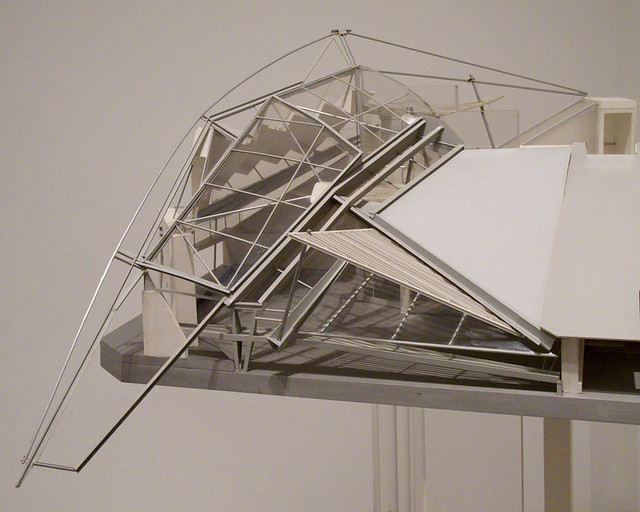 MoMA has put some pieces from their collection that were in the 1988 exhibition back on display in a small room in the contemporary galleries on the second floor. Pieces like Coop Himmelb(l)au's model of the Rooftop Remodeling in Vienna (pictured here) are also accompanied by some pieces that were not in the show, like Eisenman's drawings for House VI. The few drawings and models on display aren't much of a 25-year celebration of what can be seen as a very influential show (not as influential as the International Style exhibition of 1932, but still important considering the subsequent careers of the seven architects and their influence on countless others), but MoMA did at least hold a panel discussion with Eisenman, Tschumi, Wigley, and curator Barry Bergdoll. For those who couldn't make it to the event, MoMA has shared a video of all 90 minutes of it:

After attending the panel discussion and seeing the model of the Rooftop Remodeling alongside other projects that influenced my undergraduate education, I wrote an "Insight" piece for World-Architects that looks back to Deconstructivist Architecture and traces the subsequent careers of the seven architects, examining the impact of the show and the changes in architecture in the last 25 years.
Email Post