Sunrise to High-Rise: A wallbook of architecture through the ages by Lucy Dalzell
Cicada Books, 2014
Hardcover, 24 pages 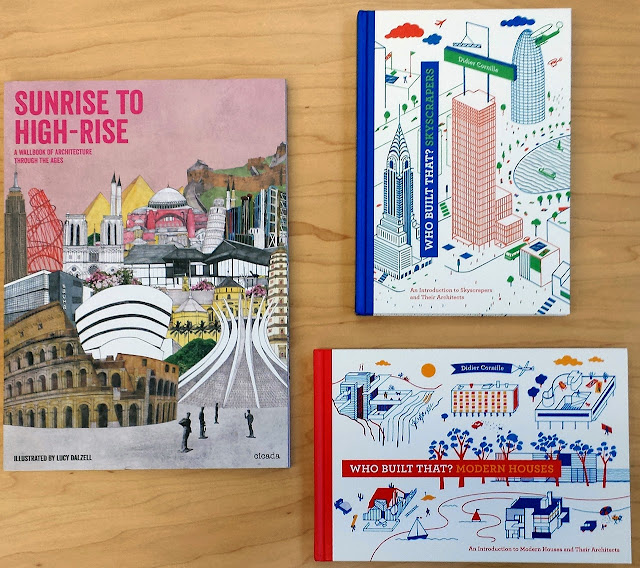 I'm a big fan of architecture books geared toward children, mainly because knowledge of architecture in the years before college could use a boost. My background was an exception, with some classes in high school, but for kids in grade school and middle school, architecture isn't talked about as much as it should be. Books geared to them can range from fables and other stories to biographies and sketchbooks. Together, kids books about architecture convey an understanding of the subject's history, but also how to think like an architect in terms of spatial understanding and representation. The three books reviewed here are aimed at kids around 10-12 years of age, since the titles are interested with giving a sense of architectural history and conveying how buildings evolved over the years.

First is one of two "Who Built That?" books by Didier Cornille; this one is focused on houses and therefore takes a landscape format, while the one on skyscrapers appropriately uses the portrait format. Cornille starts with Gerrit Rietveld's Schröder House (1924) and ends ten houses later with Sarah Wigglesworth and Jeremy Till's Straw House (2002). While the title asserts the importance is in the "who," the drawings and text are really more concerned with the "how" and the "why," which is important considering that modern and contemporary houses can be more perplexing than traditional houses in these terms. Didier's drawings are colorful and have a playfulness that is commendable, though the portraits of the architects are a bit off; they capture the features of Wright, Mies, Gehry, and the rest, but nevertheless look only a little bit like their namesakes. 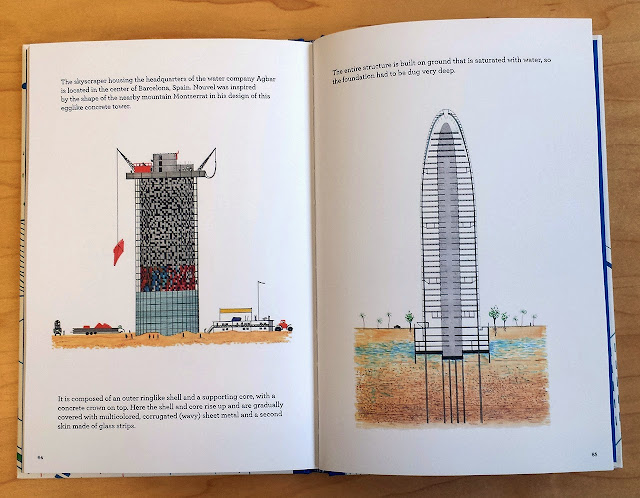 Much of the same can be said about Cornille's second "Who Built That?" book, which is about skyscrapers. Yet given the complex technical requirements of tall buildings, there is an even larger emphasis on how they are built. For example, the above spread, showing Jean Nouvel's design for Torre Agbar in Barcelona, describes the sequencing of the construction and a section of its concrete core tied deep in the watery soil. Given the need for more space for the explanations, and the inclusion of additional examples by the same architects (also present in the modern houses book, but not to the same degree), the book features only eight skyscrapers, unlike the ten houses that are featured in the same amount of pages. Nevertheless, the book does not delve as deep as, say, David Macaulay in Unbuilding, but it does give enough variety in the forms and locations of the eight skyscrapers that any child should find one of interest. 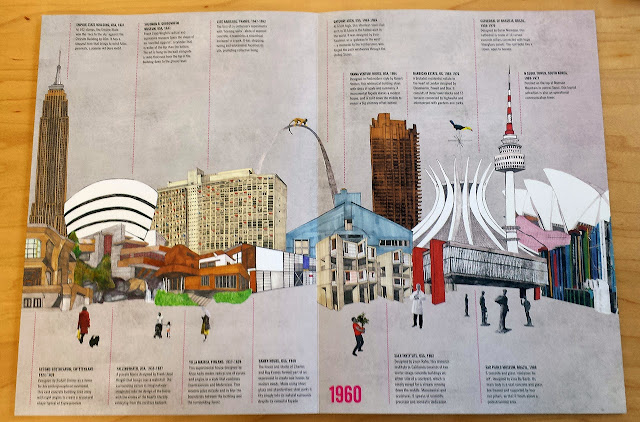 [Spread from Sunrise to High-Rise | Photo by John Hill]

The third children's book here isn't really a book at all; it is a concertina binding that opens like an accordion, telling the history of architecture through buildings on one side and through styles/periods on the other. The latter is fairly dry, with text and one example highlighting everything from neolithic architecture (10,000-2000 BC) to contemporary architecture (unfortunately, postmodern architecture (1960-1990) incorrectly highlights OMA's CCTV tower, which is neither postmodern nor fitting within the timeframe), but the former's colorful panorama by Lucy Dalzell is especially beautiful, particularly when it's unfurled to over 90 inches.

The buildings – from the Göbekli Tepe in Turkey in 10,000 BC to Lacaton Vassal's Tour Bois le Prêtre in France (2006-2011) – overlap and blend into each other to create an undulating, architectural horizon line. Sure, the buildings are not scaled relative to each other, creating odd and ever-changing depths of field, but the whole expressively tells the story of major monuments over time. It is an international history that has some suspect building and layout choices here and there (Rural Studio's small Yancy Chapel is a refreshing choice, but it towers over buildings by Gehry, Libeskind, Foster, Nouvel and others in a somewhat jarring manner), but it is for the most part a well-rounded selection. It's not often that children's books have the option of becoming wall art, but in this case it's clear the illustrator and publisher wanted the history of architecture to be an ever-present part of a child's bedroom.