So You Want to Learn About: Architects in Their Own Words

For the longest time I was not a fan of interviews, though recently I've come around to them to the extent that I sometimes search them out. I'm not sure why I didn't like them nor why I like them now, but it might have to do with having less time to read books in their entirety combined with a desire to know the ideas and motives of particular architects. With this subtle shift of reading habits a number of books with interviews have entered my library in the last couple of years. Below is a sampling of those titles, about half of which I've reviewed previously. 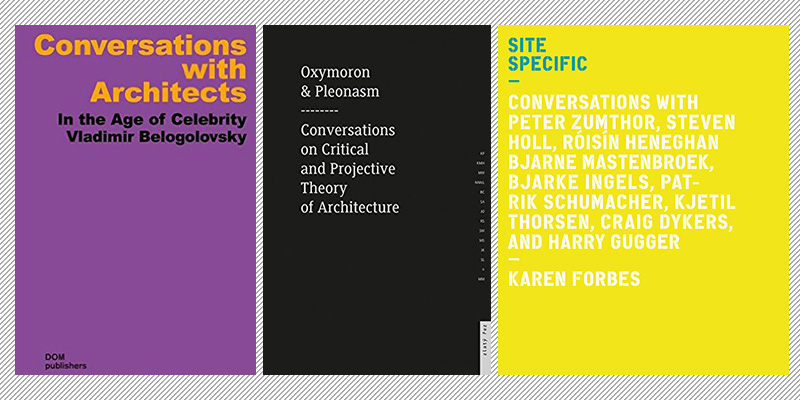 1: Conversations with Architects: In the Age of Celebrity by Vladimir Belogolovsky | DOM Publishers | 2015 | Amazon | Review
Spurred by the 2002 competition for the World Trade Center master plan, curator Belogolovsky started interviewing architects that found themselves in the public spotlight. Only marginally about celebrity and the "starchitecture" phenomenon, this collection of interviews made over a dozen years benefits from probing questions and a strong desire to understand how the architects work and think.

2: Oxymoron and Pleonasm: Conversations on American Critical and Projective Theory of Architecture by Monika Mitášová | Actar | 2015 | Amazon
If you know the difference between critical and projective theory (or what pleonasm means) then this is the book for you. It is loaded with twelve lengthy interviews that Mitášová, a professor at Trnava University in Slovakia, conducted in 2009 and 2010 when she received a Fulbright Visiting Scholar fellowship at UCLA and Columbia University. The usual suspects are all here: Kenneth Frampton, Mark Wigley, Beatriz Colomina, Jeffrey Kipnis, Sylvia Lavin. What comes across in the interviews, as well as Mitášová's summary at the end of the book, are the mutual relationships between the interlocutors, as if the ideas on critical and projective architecture have come about through their conversations with each other, both formal and informal, recorded for prosperity and not.

3: Site Specific: Conversations with Peter Zumthor, Steven Holl, Róisín Heneghan, Bjarne Mastenbroek, Bjarke Ingels, Joshua Prince-Ramus, Patrik Schumacher, Kjetil Thorsen, Craig Dykers, and Harry Gugger by Karen Forbes | ORO Editions | 2015 | Amazon
As the title indicates, these interviews are about site, "the reading of layers of histories, different modes of use, geography, culture and society," per Forbes's preface. The cover lists the architects involved, and it's a strong list, even though Zumthor's inclusion is a bit misleading – his contribution is one short page versus the lengthier and more in-depth interviews with the other architects. Each interview is accompanied by photos of two projects by the architects, buildings that illustrates how they respond to the particulars of a site. 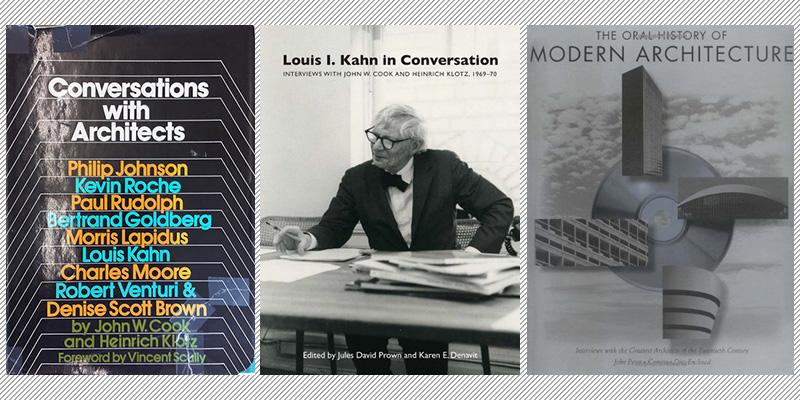 4: Conversations with Architects: Philip Johnson, Kevin Roche, Paul Rudolph, Bertrand Goldberg, Morris Lapidus, Louis Kahn, Charles Moore, Robert Venturi & Denise Scott Brown by John Wesley Cook & Heinrich Klotz | Praeger Publishers | 1973 | Amazon
In the late 1960s and early 1970s two unlikely people – Cook, a professor at Yale Divinity School, and Klotz, an architectural historian from Germany – interviewed nine American architects (eight men and one woman) and condensed the transcripts into this book, which can be found cheaply all these decades later (mine was a couple dollars at a thrift store). Forty years after publication the book is of value to historians but also anybody interested in particular architects, especially those whose popularity ebbs and flows (Rudolph, Lapidus). The interview with Kahn was expanded into its own book (#5) and published in 2015.

5: Louis I. Kahn in Conversation: Interviews with John W. Cook and Heinrich Klotz, 1969–70 edited by Jules David Prown & Karen E. Denavit | Yale University Press | 2015 | Amazon
Kahn's interview in Cook and Klotz's collection of interviews (#4) exhibits the architect's signature enigmatic insights, but like the others in that book it was just a condensation of lengthier interviews that took place on multiple occasions. The full transcript of the five interviews made in 1969 and 1970 have been assembled forty years later into this book, complete with time markers in the sidebar next to questions and answers and chapters keyed by date and tape side. Obviously this book is for hardcore Kahn fans, and they benefit from Prown and Denavit's thorough approach, which even indicates when Kahn was drawing something for the interviewers, with attempts made to find those sketches.

6: The Oral History of Modern Architecture: Interviews With the Greatest Architects of the Twentieth Century by John Peter | Harry N. Abrams | 1994 | Amazon
Obviously one thing missing in books with interviews is the voice, the actual recording that is. Books by their nature are transcripts, and therefore they have the ability to give the words some polish (removing "ummms," for example) and condense them into more concise expressions. But this book with interviews with forty architects (some are presented in print as snippets, but some are longer transcriptions) comes with a CD for listening to select conversations. It makes it truly an "oral history" and one that any fan of modern architecture should have. 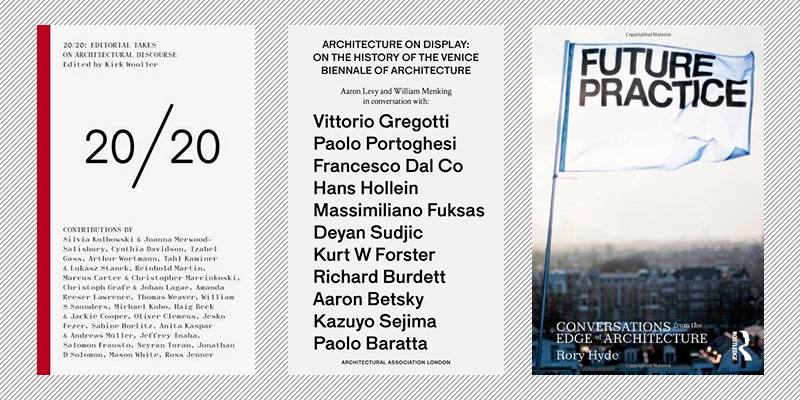 8: Architecture on Display: On the History of the Venice Biennale of Architecture edited by Aaron Levy & William Menking | Architectural Association Publications | 2010 | Amazon | Review
In 2012 I went to my first Venice Architecture Biennale; it was the one under director David Chipperfield, themed Common Ground. Right before heading over to Venice for the press preview I read this small-format book with interviews of past directors, covering everything from Paolo Portoghesi's famous 1980 PoMo Biennale, "The Presence of the Past," to Kazuyo Sejima's "People Meeting in Architecture" Biennale from 2010. This is the only oral history of the Biennale that I'm aware of, and it's a good one.

9: Future Practice: Conversations from the Edge of Architecture by Rory Hyde | Routledge | 2012 | Amazon | Review
On that first visit to the Biennale in 2012 I saw a cart rolling around the grounds, a mobile recording studio with a flag emblazoned with the words "Architecture on the Air." The traveling radio show  was handled by a group of people that included Rory Hyde, now curator at the V&A, and the author of this book of interviews with architects practicing in non-traditional ways. You won't find the architects of books 1-6 or 10-15, but you'll find young architects and small practices that are putting their educations to alternative uses; a valuable book for those wishing to do the same. 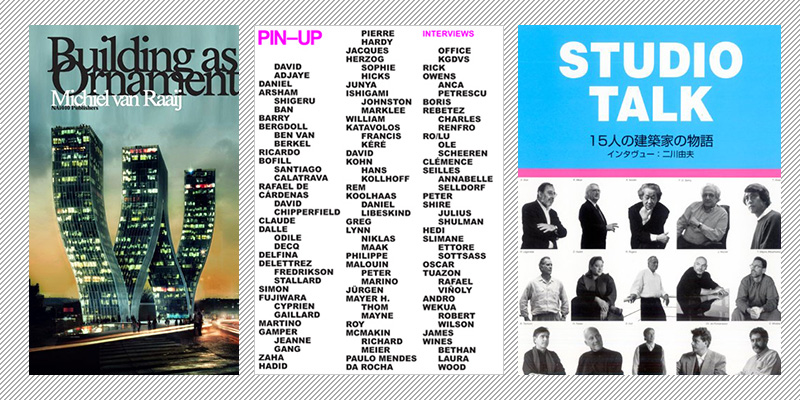 10: Building as Ornament by Michiel Van Raaij | nai010 Publishers | 2014 | Amazon | Review
Michiel van Raaij, author of the defunct blog Eikongraphia (Iconography), took that site's focus on iconic imagery into this collection of interviews with architects such as Denise Scott Brown, Ben van Berkel, Steven Holl, Winy Maas, and Bjarke Ingels. Like #3 above, the interviews purposely explore a particular theme and cater the selection of architects accordingly. The topic of large-scale symbolic architecture makes a lot of sense this century, when the desire for icons continues unabated.

11: PIN-UP Interviews by Felix Burrichter | powerHouse Books | 2013 | Amazon | Review
Although architects only make up a fraction of the interviews culled from PIN-UP Magazine into this book (about half to two-thirds), the selection of architects includes THE big names: David Adjaye, Santiago Calatrava, Zaha Hadid, Jacques Herzog, Rem Koolhaas, Daniel Libeskind, and Thom Mayne, among others. Like the magazine, the interviews are a bit lighthearted but also serious. A bonus is that many of the interviews are conducted by other architects, artists and so forth (not just PIN-UP editors), making the conversations often two-way affairs.

12: Studio Talk: Interview with 15 Architects by Yoshio Futagawa | ADA Edita | 2002 | Amazon
Yukio Futagawa, who died in 2013, was the founder and director of GA Architecture, the awesome magazine that fetches for high prices in the States. I've been a big fan of the various GA output (GA Houses, GA Document, etc.) since college, though I don't have as many as I'd like due to their prices; the ones I have I'd be hard-pressed to part with. GA is now helmed by his son, Yoshio, who is responsible for this collection of interviews culled from GA Document Extras. Among other things, it reveals that GA is in good hands. 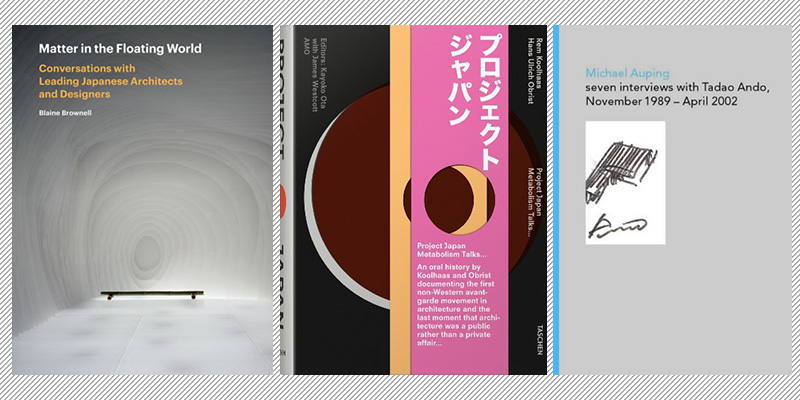 13: Matter in the Floating World: Conversations with Leading Japanese Architects and Designers by Blaine Brownell | Princeton Architectural Press | 2011 | Amazon | Review
Studio Talk (#12) is a good segue into a few of the various books I have that feature interviews with Japanese architects. Blaine Brownell's conversations certainly are worth reading for those interested in architecture from Japan, particularly in regards to material innovation and sustainability. As the title indicates, it's not all architects, but the ones included are a good crop, including Shigeru Ban, Terunobu Fujimori, Jun Aoki, and Toyo Ito.

14: Project Japan: Metabolism Talks. by Rem Koolhaas and Hans Ulrich Obrist | Taschen | 2011 | Amazon | Review
Soon after this oral history of "the first non-Western avant-garde movement in architecture" came out, I saw Koolhaas and Obrist in conversation at the New York Public Library. It was a little odd to see Obrist on the receiving end of questions from NYPL Live Director Paul Holdengräber, since Obrist is known for interviewing artists and architects, many of them in marathon sessions. (I have one collection of his interviews, but didn't include it here since architects are a small number of the personalities featured.) It was clear from the event that Koolhaas and Obrist make a good team, and their interviews with Kiyonori Kikutake, Fumihiko Maki, Kisho Kurokawa, and others are a joy to read, aided by Irma Boom's thoughtful book design.

15: Seven Interviews With Tadao Ando by Michael Auping | Modern Art Museum of Fort Worth | 2002 | Amazon | Review
More clients should do what Modern Art Museum curator did with Ando, when the museum across the street from Louis I. Kan's Kimbell Art Museum was under construction: he interviewed the architect each time he was in town for a meeting or site visit, assembling the interviews into a book, a handsome one at that (the cover image doesn't capture it, but the chip board cover has a grid of holes that echo Ando's concrete walls). The interviews allowed Auping to learn more about the architect, the building, and architecture in general, while doing the same for the reader.
Email Post
Labels: so you want to learn about