Archinect is no stranger to print, having produced Bracket every couple years or so since the inaugural issue in 2010. Regardless, Archinect is making a big deal about Ed, the new quarterly print publication it describes as "an experiment in how to evolve architectural publishing." Archinect founder Paul Petrunia further describes Ed as "a hybrid publication ... [that] will charge forward into new territory while taking inspiration and elaborating on trends from Archinect’s dedicated community of participants and contributors." Starting with the first issue that was just released, each Ed will have its own theme and unique graphic design.

Ed 1, under Editor in Chief Nicholas Korody and designer Folder Studio, is themed "The Architecture of Architecture," which immediately brings to mind the theme of the first Chicago Architecture Biennial, "The State of the Art of Architecture," at least in name and being fairly open-ended. Korody's introduction describes architecture as "always plural and always contested" and the issue as "a self-portrait of the discipline and the profession." Petrunia's and Korody's words combine to paint some pretty ambitious goals; although I don't doubt their ambition, it's hard to grasp clearly where the "new territory" lies or if the publication says more about (the architecture of) architecture than other publications, print or otherwise. 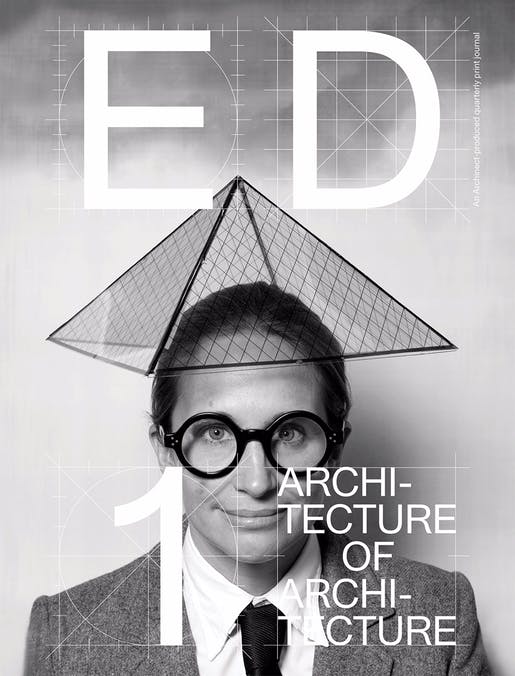 Korody describes Ed 1 as "a journal wrapped in a magazine," an assertion that holds up in both its contents and its design. Design-wise, the "magazine" contributions that begin and end the issue are in color, on glossy paper, and tend to be projects and/or interviews with architects; alternatively, the "journal" contributions are on matte pages with b/w illustrations, the occasional half-page insert and its own table of contents, and the articles here tend to be scholarly in tone. The whole is very handsome (it even smells good!) and holds much promise for future issues, particularly given that each, like MAS Context, will be designed by a different graphic designer.

In terms of content, I found myself drawn equally to pieces in both sections of the issue: an excerpt from Interboro's The Arsenal of Inclusion & Exclusion and the "Small Studio Snapshot" on Brandão Costa Arquitectos in the "magazine" section; and contributions by Troy Conrad Therrien, Jack Self, and Scott Deisher, among others, in the "journal" section. A couple essays paint differences between print and online. "Heroes, Rumors, Cults: Designs on Architectural Celebrity" by Feminist Architecture Collaborative (the cover story) can be found online as well, but with its numerous footnotes (one after the first word!) and illustrations, the print version is more readable. Deisher's piece, "Swagger from the Front: Crisis and Criticism since 1980," makes me realize what is in other publications but is missing here: a bio. Who is Scott Deisher? Beats me, but Ed doesn't help; perhaps Archinect will.