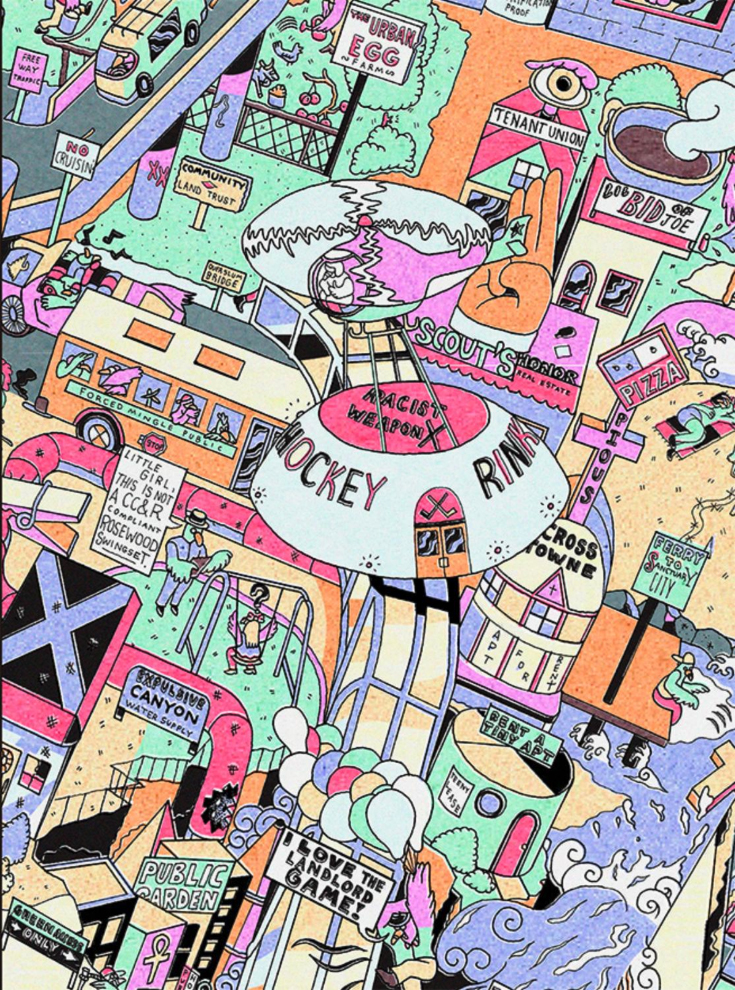 Back in 2011, Interboro Partners won MoMA PS1's Young Architects Program, installing "Holding Pattern" in the courtyard of the Long Island City, Queens, institution that summer. Although seven years old, the installation comes to mind when reviewing their new book, The Arsenal of Exclusion & Inclusion, for a few reasons: It was the first I'd heard of Brooklyn's Interoboro; "Holding Pattern" was accompanied by a mural designed by Lesser Gonzalez to visually explain the installation's concept, a diagram very similar to the one he made for the book's cover and accompanying foldout poster; and although the installation's most striking feature was the "soaring hyperboloid" of fabric over the courtyard, its most lasting impact came from the furnishings and other elements (kiddie pools, ping pong tables, lounges, etc.) below the fabric canopy, pieces that were determined and designed following input from MoMA PS1 neighbors and then donated to them after the installation was taken down. The motive behind the last — that objects from a temporary architecture installation are given a second life with people who could probably care less about architecture, much less the kind commissioned by MoMA — is clearly aligned with Interboro's new book. 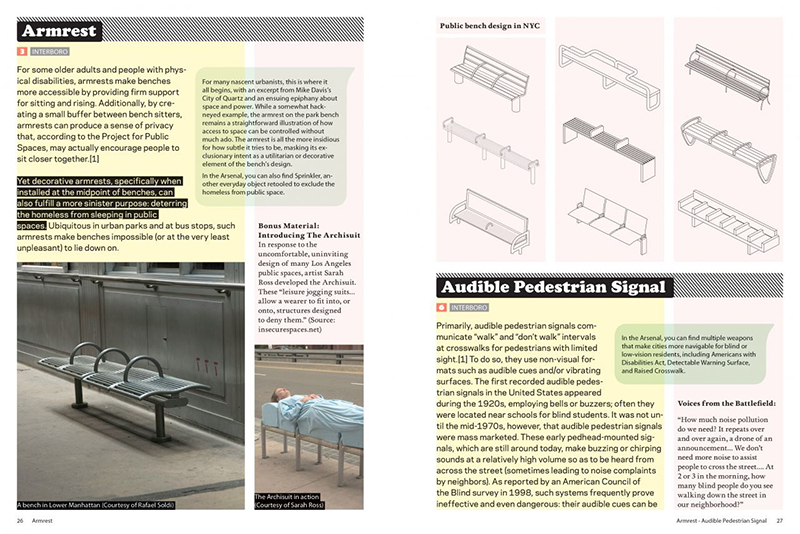 The Arsenal of Exclusion & Inclusion is an encyclopedia-like collection of "weapons" that either exclude or invite people from doing things — or just being — in public spaces. Although not explicitly categorized as one or the other, most of the weapons — from "Armrest" and "Bouncer" to "Saggy Pants Ban" and "Ultrasonic Noise" — clearly fall into the exclusionary camp (some, it could be argued, encompass both exclusion and inclusion). Authored primarily by Interboro's Tobias Armborst, Daniel D'Oca and Georgeen Theodore (with Riley Gold), the book has more than fifty contributors penning some of the main entries in yellow (per the spread above) and the "Bonus Materials" that are highlighted in pink. More information is literally layered over the yellow and pink columns in the form of bubbles that have references to weapons elsewhere in "the Arsenal." 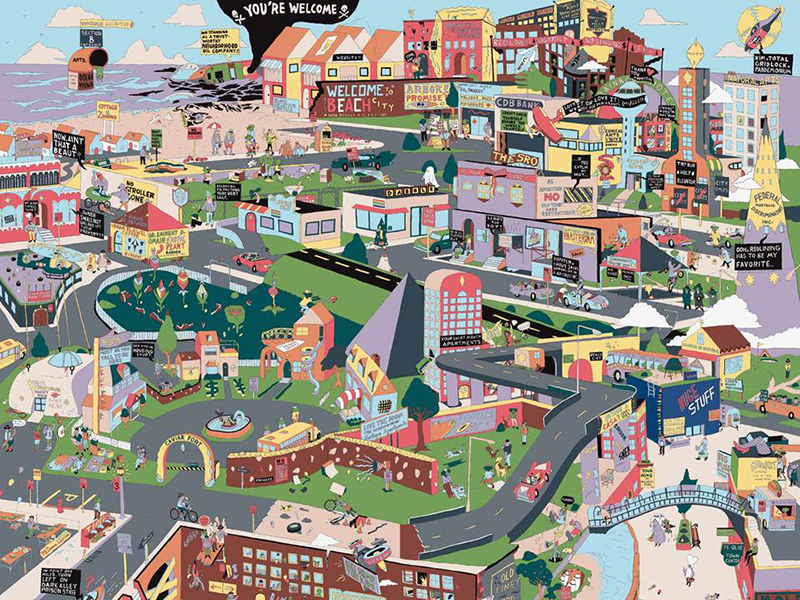 With an A to Z format, dozens of entries, and layers of textual and visual information, it's easy to see The Arsenal of Exclusion & Inclusion as a reference, something to be consulted now and again when wanting to know a little more about "Covenents, Conditions, and Restrictions" or "Lavender-Lining." But the entries are too short (though all are accompanied by bibliographic references) and polemical to be definitive resources. So to better make the book something to be read — and read as an argument — Interboro provides six "tours" through the Arsenal. One, for instance, tackles racial segregation, while another is focused on increasing accessibility (a very inclusive tour). These tours are called out subtly with numbers next to the author (note numbers 3 and 6 in the spread above), but readers can also follow the overlaid bubbles in a choose-your-own-adventure manner, thereby jumping from "Armrest" to "Sprinkler" to "Curb Cut" and so on. Whatever tactic readers take, they should come away with an appreciation for the importance of (public) space, a realization that it is often shaped by one group of people at the expense of another, and that, as prevalent as exclusionary practices may be, Interboro and many others today are pushing against them with ammunition for creating a more inclusive society.