So You Want to Learn About: 'Learning from Las Vegas'

Well before the death of Robert Venturi last week at the age of 93, I'd planned a "So You Want to Learn About" post on Learning from Las Vegas, the classic text by Robert Venturi, Denise Scott Brown, and Steven Izenour from 1972. It's only now that I finally got around to finalizing it. Last year I noticed that MIT Press had released a facsimile version of the hard-to-find and extremely expensive first edition; a couple years before that I came across and bought a cheap copy of the first edition; and over the years I'd amassed a few titles that analyze and critique the influential book. I can't think of any other book that has given rise to so many book-length investigations. Therefore Learning from Las Vegas -- and Robert Venturi -- deserves, at the very least, the "So You Want to Learn About" treatment. 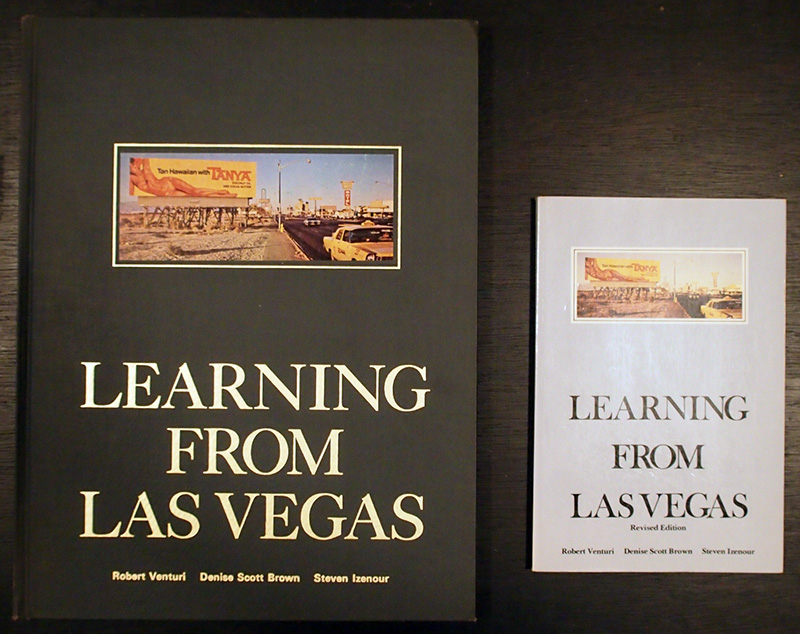 Learning from Las Vegas by Robert Venturi, Denise Scott Brown, Steven Izenour
The MIT Press, First Edition, 1972 (Amazon)
The MIT Press, Revised Edition, 1977 (Amazon)
Learning from Las Vegas is one of the five most important books of architecture in the 20th century, up there with Le Corbusier's Towards a New Architecture, Rem Koolhaas's Delirious New York, Aldo Rossi's The Architecture of the City, and Venturi's own Complexity and Contradiction in Architecture. Born from a 1968 Yale architecture studio, the book analyzed the way casinos, hotels and other buildings along the Las Vegas Strip used signage to attract attention and apprise drivers of the contents of the buildings set back behind parking lots. Through this, they argued for the Decorated Shed over the Duck, the former using signage to communicate the contents of a simple building and the latter using form to convey its function. Put simply, the Duck represented Modernism while the Decorated Shed represented something else, what would become Postmodernism in ensuing years. Like Venturi's earlier Complexity and Contradiction, which argued that "Main Street is almost all right," Learning from Las Vegas looked at an extreme example of one (the Strip) rather than at capital-A architecture to determine what architecture should be and what architects should learn from.

Like most architects, I first encountered Learning from Las Vegas in architecture school. Given that this was the early 1990s, I read the revised edition from 1977 in a seminar class on architectural theory, not the original 1972 edition. (My copy is from 1993, the book's twelfth printing.) Not many books can boast of such different editions: the first edition is a hardcover book whose size and expense (it was expensive originally, over the years as a hard-to-find artifact, and in MIT Press's facsimile edition) signal something special, while the revised edition is a much smaller paperback designed to be affordable to students like myself. The revised edition cut a third of the original book by eliminating part 3, a presentation of Venturi and Rauch's buildings and projects, and many of the images that would not work on a smaller page size. Regardless of these cuts and a substantially different page design, the arguments of the text have held up, while the lower price has guaranteed a wider circulation and lasting influence.

I AM A MONUMENT: On Learning from Las Vegas by Aron Vinegar
The MIT Press, 2008 (Amazon | Review)
When I reviewed Aron Vinegar's book for Architect Magazine back in 2009, my familiarity with the first edition of Learning from Las Vegas was very small; I knew it was a hardcover larger than my revised edition from college, but I'd never seen one in person nor glanced at its pages. Vinegar's book gave me the greatest understanding of the differences between the two editions, both in terms of their physical characteristics and the relationship between layout and content. The latter is particularly important, since Venturi and Scott Brown saw the design of the first edition by Muriel Cooper as oppositional to everything they were railing against in their book; put simply, it was a Duck rather than a Decorated Shed. Vinegar doesn't just analyze the layout of the two editions. He strives to reorient how the text is read, but to me his philosophically derived interpretations don't displace the long-held meanings of the classic text by Venturi, Scott Brown, and Izenour.

Relearning from Las Vegas edited by Aron Vinegar, Michael J. Golec
University of Minnesota Press, 2009 (Amazon | Book Brief)
Aron Vinegar is also present in this collection of essays released the same year as I AM A MONUMENT. His co-editor, Michael J. Golec, contributes an essay on the format and layout of Learning from Las Vegas, so Vinegar hones in on how expression and its inverse, inexpression, are tackled in the book. Other contributors to the academic collection include Karsten Harries, Dell Upton, Ritu Bhatt, Jean-Claude Lebensztejn, John McMorrough, Katherine Smith, and Nigel Whiteley, analyzing everything from photorealism and kitsch to Reyner Banham in Los Angeles. The complex, nuanced takes on Learning from Las Vegas and its influences add some depth to any reading of the original.

Las Vegas Studio: Images from the Archives of Robert Venturi and Denise Scott Brown edited by Hilar Stadler, Martino Stierli
Scheidegger and Spiess, 2008, reprinted in 2015 (Amazon)
Learning from Las Vegas is an image-heavy book, full of sketches, drawings, diagrams, and photographs. All are memorable in their own right (think of the sketch of the Duck and Decorated Shed), but the photographs capture the color of Vegas, a city of night and light. (Las Vegas was, to Reyner Banham, "truly itself" at night.) Just look at the cover of the originals or the cover of Las Vegas Studio, which presents dozens of photographs from the Yale studio's visit to Las Vegas in 1968. These photos are bookended by an introductory essay by Martino Stierli that is based on the original German edition of his book Las Vegas in the Rearview Mirror (below) and a conversation between Peter Fischli, Rem Koolhaas, and Hans Ulrich Obrist (in it, Koolhaas calls the photo of Venturi and Scott Brown at bottom "almost hot."). The latter is followed by an essay by Stanislaus von Moos, who has written two monographs on the practice of Venturi, Scott Brown and Associates. These intellectual voices add their takes and some depth to the images, though the photographs can hold their own as aesthetic images and ethnographic evidence of a particular time and place.

Las Vegas in the Rearview Mirror: The City in Theory, Photography, and Film by Martino Stierli
Getty Publications, 2013 (Amazon)
Martino Stierli, now the Philip Johnson Chief Curator of Architecture and Design at MoMA, wrote his PhD dissertation on Learning from Las Vegas. Published in German by gta Verlag in 2010, Las Vegas im Rückspiegel was translated into English three years later and published by the Getty. As the subtitle of Las Vegas in the Rearview Mirror makes clear, Stierli focuses on how the 1972 book theorizes the city through photography and film. While the photography of the Yale studio in Las Vegas is well known (see Las Vegas Studio), the use of film is less familiar to people. (There are dozens, if not hundreds of photos in Learning from Las Vegas, but there is only one spread with a film strip.) But film was an integral part of both documenting and analyzing the Las Vegas Strip back in 1968. After all, what better way to capture the ever-changing views from a car's windshield as it traverses the Strip than a movie camera? Film is surely not the sole media that Stierli discusses, but it is further evidence of the groundbreaking nature of the original book. In the hands of Venturi, Scott Brown, Izenour, and their students, photography and film were the media ideally suited to the reality of the Strip as a very American space that needed to be understood and interpreted. 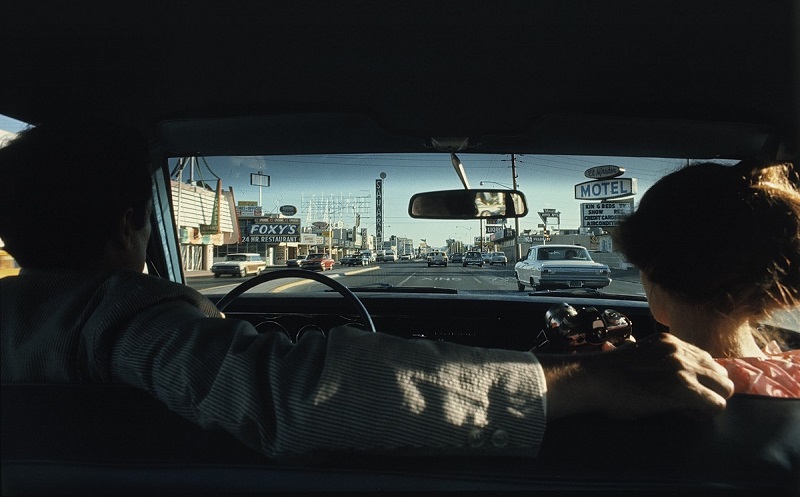