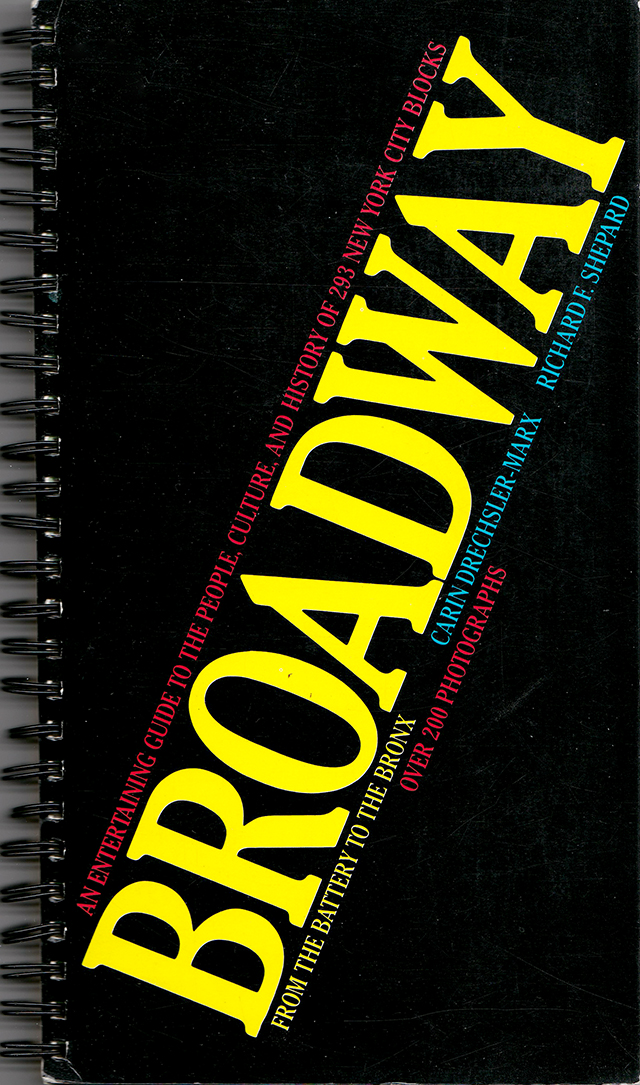 dDAB COMMENTARY:
A few days ago, I featured Walking Broadway, a guidebook to "Thirteen Miles of Architecture and History" by William J. Hennessey. In my review I mentioned that the new book is not alone in focusing on Manhattan's most famous street; many books came before. One of them is Broadway: From the Battery to the Bronx, which features photography by Carin Drechsler-Marx and text by Richard F. Shepard. Although it has a map at the back and the chapters move in the preferred south-to-north route of books about Broadway, this 32-year-old book is less a guidebook and more a history of New York City told through the thoroughfare, plus a snapshot of the Big Apple in the late 1980s.
Shepard, who died in 1998, was a writer and cultural news editor at the New York Times for decades. The Times obituary linked above points out how he asked to step down from his editorial post "because he liked writing and talking to people and getting around town." These dual qualities — a Times position and a desire to get around town — come across in his Broadway text, which is a pleasure to read and shows both his deep knowledge of the city and fondness for its people and places. Most of the spreads in the book are a balance of Shepard's words and Drechsler-Marx's photographs, which veer between straightforward images of buildings and vignettes of street life, the latter strongly conveying the character of the city ca. 1988.
The book, which can be found online and in used bookstores for cheap (I did the latter), has a few interesting things going for it in terms of layout, design, and organization. Most obvious is the spiral binding, a rarity in book publishing for fairly obvious reasons ($$). Second is the choice to rotate the content 90 degrees to the page, which makes some sense with the lay-flat spiral binding and makes flipping through the book a unique experience. The last thing is the chapters, which follow from the avenues that Broadway intersects with: the book starts with "Lower Broadway" and is followed by "Broadway Crosses 5th Avenue," "Broadway Crosses 6th Avenue," and so forth. This approach amplifies the fact that, even though it departs from Manhattan's grid, Broadway intersects with the north-south avenues and east-west streets to create some of the most important nodes on the island, such as Times Square (the spreads, below) and Columbus Circle. Anyone who has this book can look at these and other areas and instantly see how much the city has changed — and stayed the same — in the last three decades.
SPREADS: 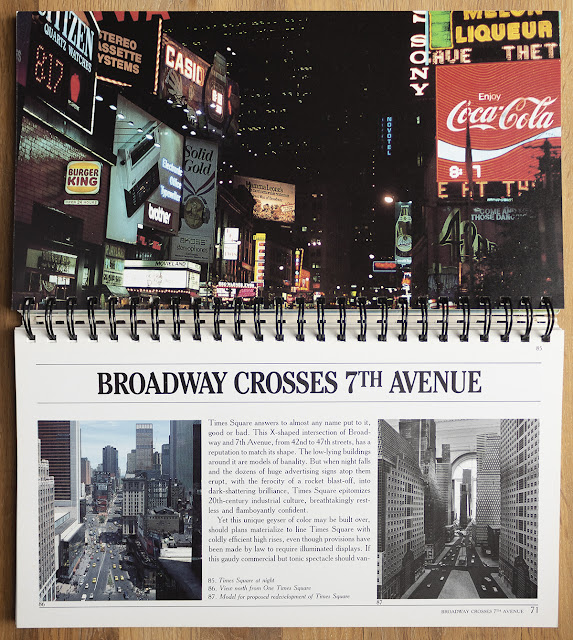 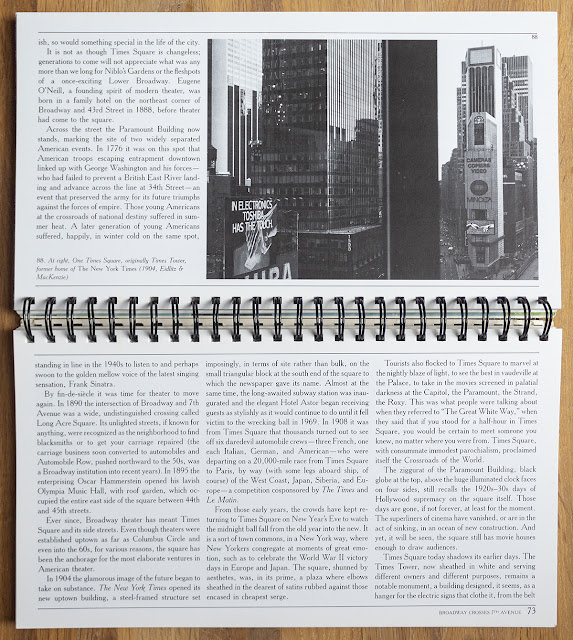 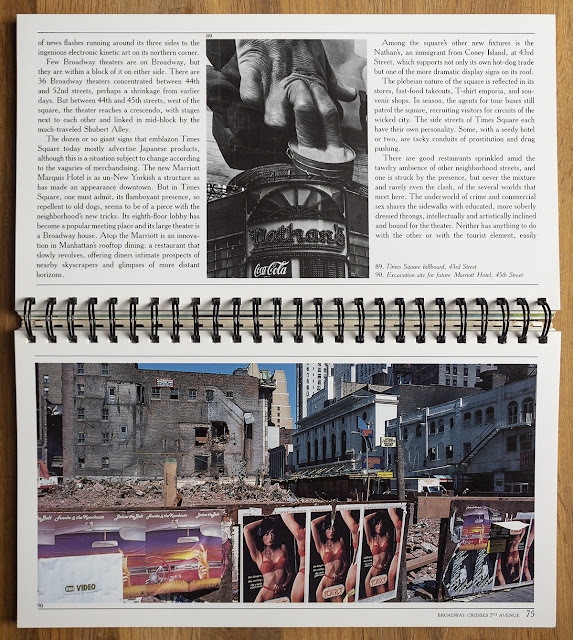 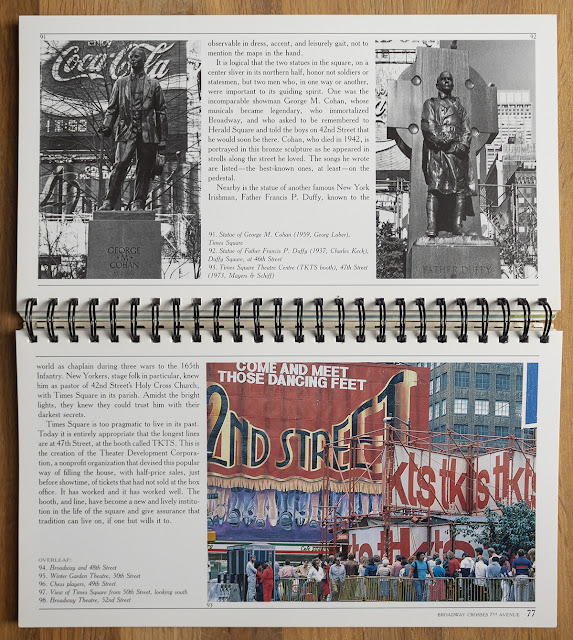 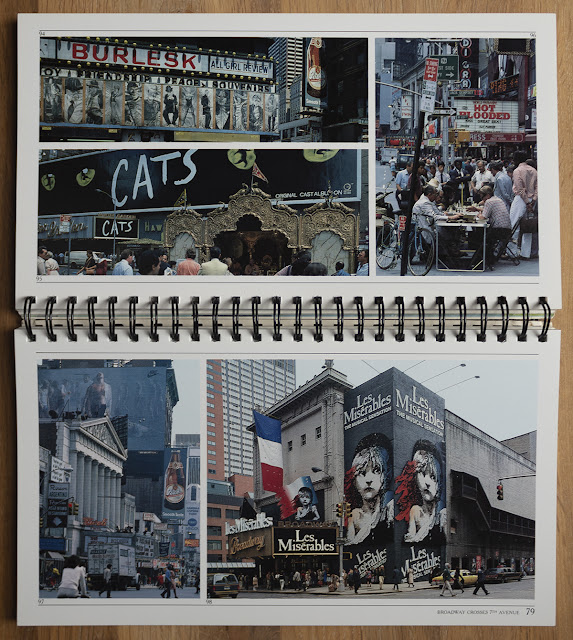