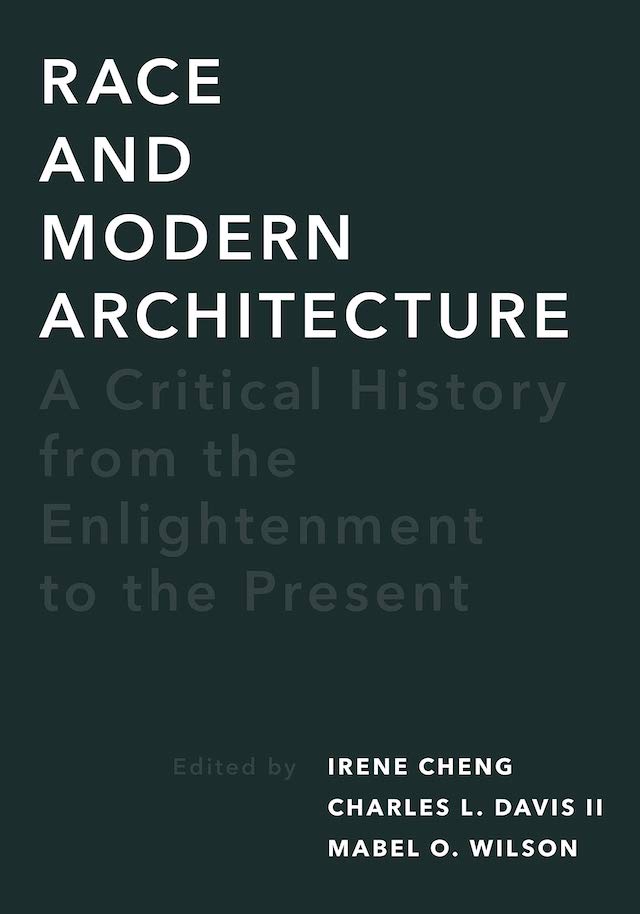 PUBLISHER'S DESCRIPTION:
Although race—a concept of human difference that establishes hierarchies of power and domination—has played a critical role in the development of modern architectural discourse and practice since the Enlightenment, its influence on the discipline remains largely underexplored. This volume offers a welcome and long-awaited intervention for the field by shining a spotlight on constructions of race and their impact on architecture and theory in Europe and North America and across various global contexts since the eighteenth century. Challenging us to write race back into architectural history, contributors confront how racial thinking has intimately shaped some of the key concepts of modern architecture and culture over time, including freedom, revolution, character, national and indigenous style, progress, hybridity, climate, representation, and radicalism. By analyzing how architecture has intersected with histories of slavery, colonialism, and inequality—from eighteenth-century neoclassical governmental buildings to present-day housing projects for immigrants—Race and Modern Architecture challenges, complicates, and revises the standard association of modern architecture with a universal project of emancipation and progress.
Irene Cheng is an architectural historian and associate professor at the California College of the Arts. Charles L. Davis II is an assistant professor of architectural history and criticism at the University at Buffalo, SUNY. Mabel O. Wilson is the Nancy and George E. Rupp Professor at the Graduate School of Architecture, Planning, and Preservation and a professor in African American and African Diasporic Studies at Columbia University.
REFERRAL LINKS:

dDAB COMMENTARY:
Recently I watched the Back to the Future trilogy with my daughter, who is the same age I was when the first film came out. There's a scene in the second film in which Michael J. Fox's character, having returned to 1985 from a futuristic 2015, goes to his suburban home in Lyon Estates but finds it in a dramatically different state from when he left it: graffiti is on the subdivision's gates, "for sale" signs and abandoned cars litter the street, stray dogs roam about, a transmission tower sits in his backyard, and an African American family is living in his home. My daughter and I rolled our eyes in unison at the last part of this filmic dystopia caused by a power-hungry time traveler. It spurred us to chat about the obvious racism of the scene, particularly in terms of a Black family and neighborhood representing crime, decay, despair ... representing basically the opposite of the idyllic upbringing of the main character and most people in the film.
While my daughter and I found the scene appalling, I can't say that I felt the same way when I watched the film as a teenager. Sure, now I'm a lot older and a little bit wiser, but I think stronger reactions to racism today are due, in part, to many more conversations being had about race, especially African Americans being treated unfairly by white people in power. Even if I would have recognized the racism of that scene as a child, like my daughter did, I probably would not have known then how government policies made it close to impossible last century for a Black family to own a house in a desirable area rather than being segregated into a ghetto. So the insertion of a Black family in Back to the Future Part II is not only a shallow racist representation, it is an acknowledgment that the policies that made such a representation tenable (the de jure and de facto segregation, as explained by Richard Rothstein in The Color of Law) are acceptable, that they don't need to be challenged. Even the head of the unnamed family yelling, "And you tell that realty company that I ain't sellin'," which has been recognized as a form of blockbusting in the film's alternate reality, doesn't help counter the subtext of the scene.
The sequel to a Hollywood blockbuster is far removed from a book arising from an academic symposium and online research project, but just as a film can now be analyzed in terms of race when it might not have been initially, the history of modern architecture can — and should, the editors contend — be understood as well in terms of race. Irene Cheng, Charles L. Davis II, and Mabel O. Wilson clearly state this aim in the introduction to Race and Modern Architecture: "The book's goal is to demonstrate that attention to race is no longer optional in the study of modern architectural history." As such, this means the eighteen scholarly contributions that follow the introduction are a starting point, not a comprehensive take on a complex and complicated subject. What the contributions share are "new methodologies," again in the editors' words, "for exploring architecture's role in the social processes of subjection."
The book starts, as its subtitle makes clear, with the Enlightenment, which is also a clear indication that "modern" is broader than the Modern Movement as many architects know it, just as "race" is used in its widest possible definition rather than being limited to Black and white. Nevertheless, the slave-holding Thomas Jefferson is a pervasive presence in Race and the Enlightenment, the first of the book's six sections: in Mabel O. Wilson's "History of Virginia's Capitol" (Jefferson designed the influential building in 1788) and Reinhold Martin's "Drawing the Color Line," which discusses, like Scott Ruff does in In Search of African American Space, the way Jefferson designed Monticello so the many enslaved people there were invisible. The second section, Race and Organicism, features contributions by the other two editors, Davis and Cheng, and approaches the twentieth century, which we reach with the third section, Race and Nationalism. These and the three remaining sections (Race and Representation, Race and Colonialism, Race and Urbanism) are thematic but also roughly chronological and geographical, with the very last essay, by Esra Akcan, set in 1980s Berlin. The editors hope the organization "will enable readers to detect the long-term effects of race theory in modern architectural debates" and "to easily compare and contrast its use during distinct periods and in discrete geographies."
Given the scholarly nature of the contributions, which range in length from 15 to 20 pages, and the few, but carefully selected, images throughout, Race and Modern Architecture is not a cover-to-cover read. It's a demanding book, in more ways than one, but a reader's interest will no doubt point them to the essays worth devoting their time. I was drawn to Wilson's and Martin's contributions in the first section, plus Cheng's essay on "Structural Racialism in Modern Architectural Theory" in the second, and a few more: In Race and Representation, Adrienne Brown's "Erecting the Skyscraper, Erasing Race" digs into the invisibility of race in William A. Starrett's 1928 book Skyscrapers and the Men Who Build Them (second and third spreads below). In the same section, Dianne Harris, author of Little White Houses: How the Postwar Home Constructed Race in America, presents a development I was unaware of — the U.S. Gypsum Research Village, built in suburban Illinois in the mid-1950s (fourth spread) — focusing on its publicity through staged photographs clearly geared to white families. In the last section, on urbanism, Andrew Herscher's "Black and Blight" brings the racism of the Hollywood film that started this review to the present day, in the foreclosures in Detroit (and elsewhere) disproportionally affecting Black households (last spread). Herscher focuses on one specific story of resistance to "the reconfiguration of blighted homes as black homes" — in a book that is much resistance as history.
SPREADS: 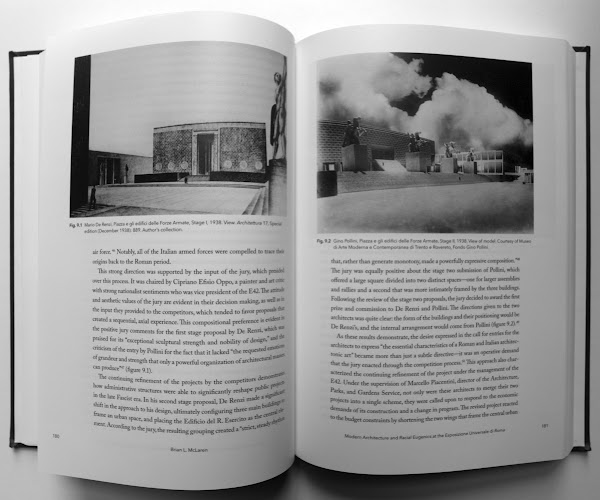 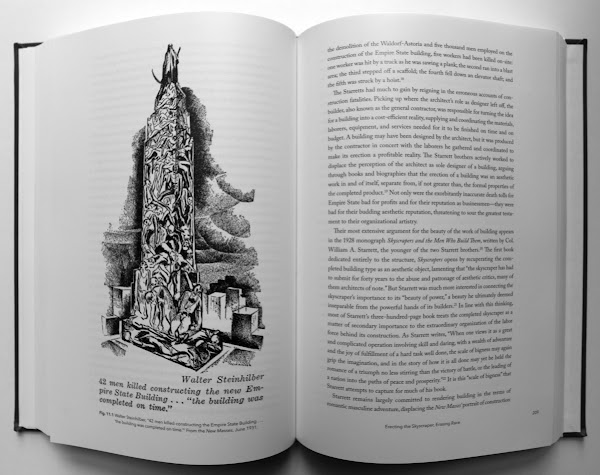 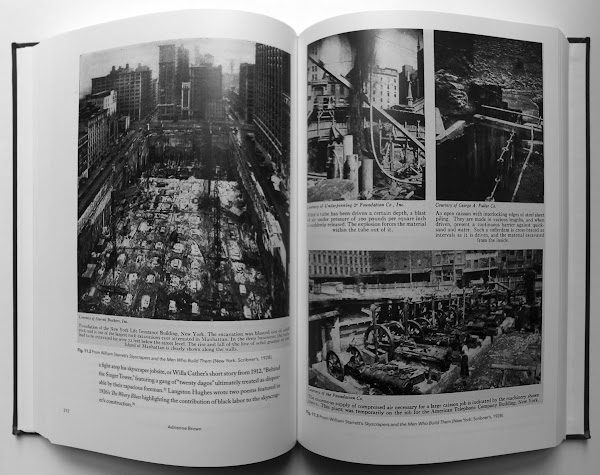 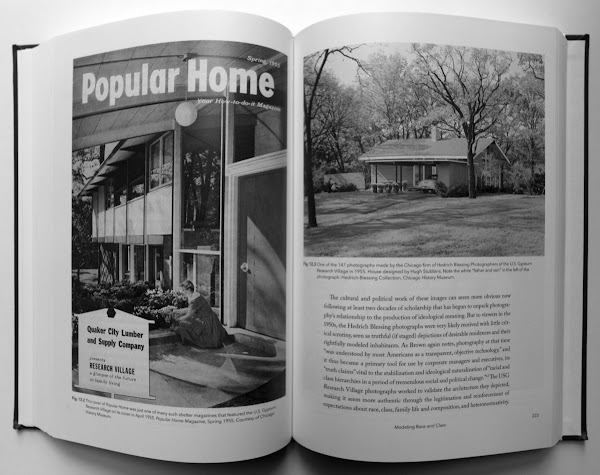 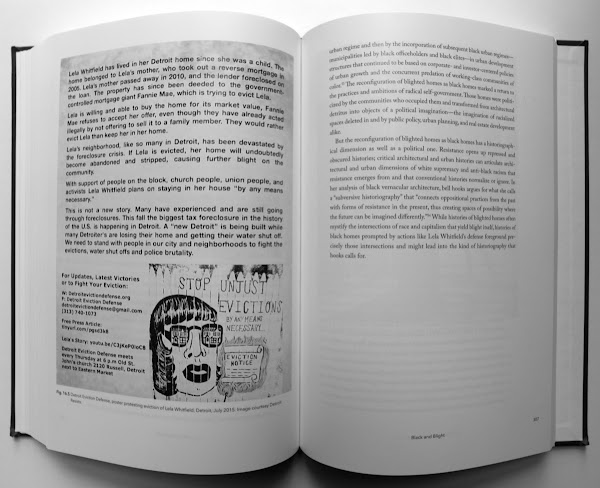