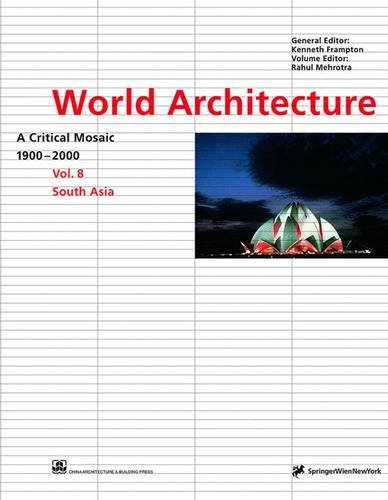 PUBLISHER'S DESCRIPTION:
At the close of the 20th century, this series of 10 volumes recording the century's most significant architectural achievements and covering all parts of the world will be published.
Altogether 1000 buildings and urban complexes have been selected by noted architecture writers and critics. Within each volume, one hundred significant examples represent the political, economical, cultural and demographic evolution of the particular region over the century. The evident complexity of the enterprise cannot entirely exclude a few arbitrary choices. Not only does the selection of procedure reflect individual choices, but also the division of the globe into transnational regions of vastly differing size and character evokes a specific appearance of World Architecture.
Thus this architectural collection is to be understood as a critical mosaic representing as a whole the entire evolution of World Architecture from 1900 to 2000. – Wilfred Wang
Kenneth Frampton is Ware Professor at the Graduate School of Architecture, Planning, Preservation, Columbia University, New York. He is the author of numerous books on architectural theory and history. Rahul Mehrotra has been an architect in Bombay [sic] since 1990. He is Executive Director of the Urban Design Research Institute (UDRI), which promotes awareness of, and research on, the city of Bombay. He has written several books and articles on architecture and urbanism.
REFERRAL LINKS:

dDAB COMMENTARY:
Three years ago on this blog I discussed the 10-volume World Architecture 1900-2000 series that Kenneth Frampton edited with a slew of volume editors, associate editors, and nominators. Each volume covers a different geographical region (Volume 1 is Canada and the United States, Volume 4 is Latin America, etc.) and consists of 100 important buildings completed throughout the 20th century. All told, the series highlights a whopping 1,000 buildings, making for a truly international sampling of mainly modern architecture last century. But very few people know about the books, especially when compared to Frampton's famous Modern Architecture: A Critical History, which was released in 1980 and just saw its fifth edition published.
My blog post from 2017 mentioned how helpful the books were for me in the research phase of 100 Years, 100 Buildings, and it drew attention to a lecture by Frampton in which he lamented the poor distribution of the ten books. I concur with Frampton, as I was able to get half of the books used for reasonable amounts (less than $30 each), but when I search out the remaining titles now, their prices approach $100, both prohibitively expensive and a sign of their rarity. With so much effort put into each title, especially by the volume editors and the various critics and historians who nominated the buildings for inclusion, the relative obscurity of these books is a shame.
I was spurred to pull Volume 8 off my bookshelf after reviewing Working in Mumbai, the "not a monograph" on RMA Architects, the firm of Rahul Mehrotra, earlier in the week. Working in Mumbai is the latest book by Mehrotra, whose website indicates more than 20 titles, though the list does not include this volume of World Architecture 1900-2000 that he edited. Most of the books are focused on India, particularly Mumbai; his most well known book is Architecture in India: Since 1990, which came out in 2011. Clearly Mehrotra has long been invested in researching and disseminating information on the architecture of India and South Asia, so he was clearly the best person for the editorial job.
Given India's population and geographical area, it's no surprise that most of the 100 buildings in this volume are located there; the other countries are Bangladesh, Pakistan, and Sri Lanka. Mehrotra's 14-page introduction puts the region's 20th-century architecture into political contexts, though with Frampton at the helm of the whole undertaking, architecture as an expression of regional identity comes to the fore, not surprisingly. The 100 building descriptions that follow the introduction focus on history and architecture and are accompanied by photos and drawings. Every building is given two pages, though some important buildings are given more. References are provided for each building, and these are very helpful for people who want to learn more than what just a few paragraphs allow.
SPREADS: 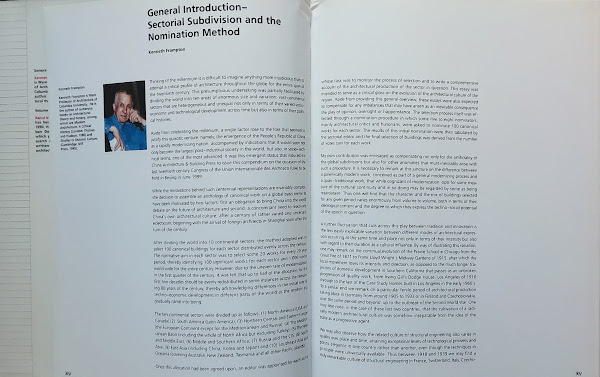 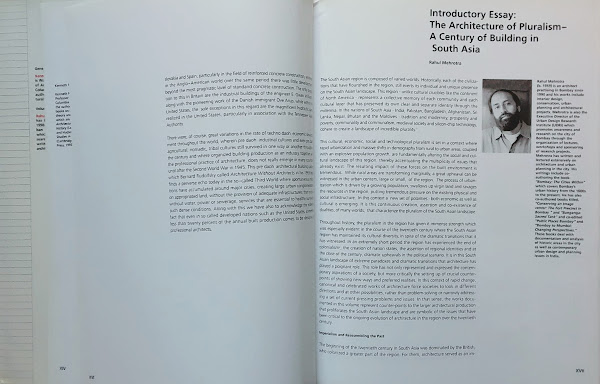 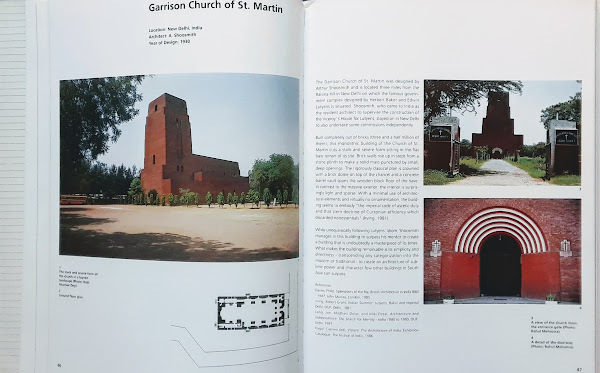 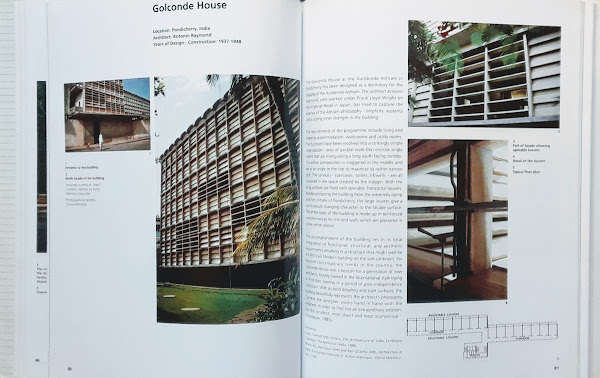 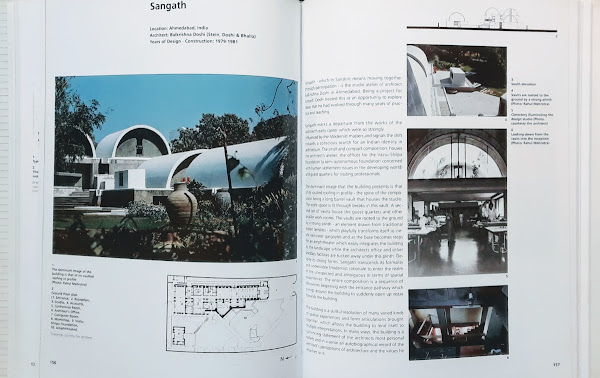 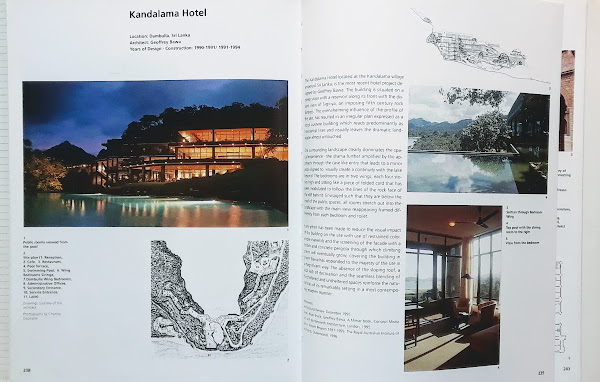