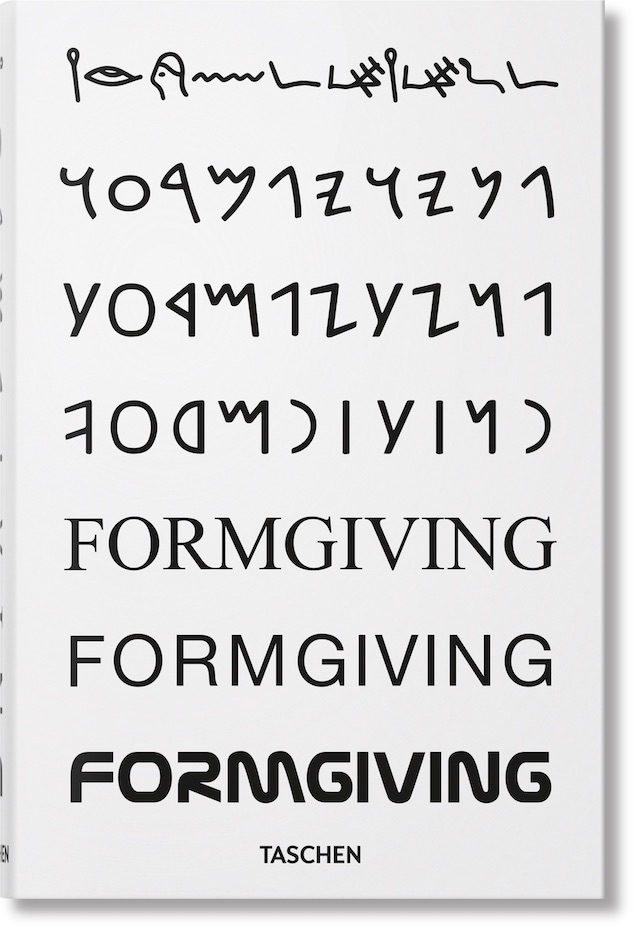 PUBLISHER'S DESCRIPTION:
Formgiving. An Architectural Future History, the new book by BIG (Bjarke Ingels Group), is a visionary attempt to look at the horizon of time. The Danish word for “design” is “formgivning,” which literally means to give form to that which has not yet taken shape. In other words, to give form to the future. Using our power to give form, rather than allowing the future to take shape, is more important now than ever, as humankind’s impact on the planet continues to increase and pose ever greater challenges to all life forms. Architecture plays a special role by proposing spaces for our lives that are fragments of the future in the making. William Gibson’s words embody architecture’s role perfectly: “The future is already here—it’s just not evenly distributed.”
With Formgiving, BIG presents the third part of its TASCHEN trilogy, which began with Yes is More, one of the most successful architectural books of its generation, and continued with Hot to Cold. An Odyssey of Architectural Adaptation. The book is presented in a timeline, stretching from the Big Bang into the most distant future. Projects are structured around six strands of evolution—“Making,” “Sensing,” “Sustaining,” “Thinking,” “Healing,” and “Moving”—the multimedia-based, interdisciplinary concepts encompassing the building industry. Culture, climate, and landscape, as well as all the energies derived from the elements—the thermal mass of the ocean, the dynamics of currents, the energy and warmth of the sun, the power of the wind—are incorporated into these projects. Throughout more than 700 pages, Bjarke Ingels presents his personal selection of projects, including the 12,000-square-meter LEGO House in Denmark, the human-made ecosystems floating on oceans, the redesign of a World War II bunker into a contemplative museum, and the ski slope-infused power plant celebrating Copenhagen’s commitment to carbon neutrality. Through architecture and design, BIG gives shape to a sustainable and simultaneously colorful world.
REFERRAL LINKS:

dDAB COMMENTARY:
A trilogy should end, ideally, with something that unites or summarizes what came before. Krzysztof Kieślowski's Three Colours trilogy brings the disparate stories of Blue, White, and Red together through a dramatic incident where all of the theretofore unrelated main characters are present. The title of Life, the Universe and Everything, the third book in Douglas Adams' five-part Hitchhiker's Guide to the Galaxy "trilogy" refers to "the Answer to Life, the Universe, and Everything"; although what should have been grand turns out to be absurd. Formgiving, the third book in BIG – Bjarke Ingels Group's Taschen trilogy — following Yes Is More (2009) and HOT TO COLD (2015) — is different, delivering a twist at the end, albeit one that is strongly aligned with a sci-fi story that involves life beyond planet earth.
There, in the last pages of BIG's new monograph — in the "Future" section, as shown in the table of contents (first spread below) — are City of New Hope, "a vision for a long-term human outpost on the Moon"; Mars Science City, "a prototypical test for a sustained city on Mars"; and Masterplanet, "a project that aims to establish a master plan for achieving a carbon-neutral planet Earth." These global and extraterrestrial projects are far removed from the Danish Pavilion at Shanghai Expo 2010, the first built work in Yes Is More, as well as the Danish Maritime Museum and Superkilen, two projects in HOT TO COLD that are notable as being finalists for EU Mies Prizes. Buildings take up the most pages in Formgiving, to be sure, but they give way at the end to circumstances far removed from the lives shaped by BIG's buildings.
The first building in Formgiving is the one that should define BIG for generations and probably be considered its masterpiece: Copenhill, the waste-to-energy plant in Copenhagen that is topped by a ski slope. It's an audacious example of how Bjarke Ingels convinces clients to take risks on unexpected scenarios, and it's one of their best instances of form melding with function(s). Copenhill is in a chapter titled "The Oxymoron," one of "the 10 Gifts" defined by Ingels early in the book: "the gifts that [BIG's projects] give. To their users. To their neighborhood. To the city. The the landscape. To the environment. To the world. And to the future." Immediately readers see the ramping up of scale and ambition in BIG's projects.
Although the book wraps up with Masterplanet, the organization of the dozens of buildings and projects into the 10 gifts gives the bulk of the book a certain evenness; projects don't increase in scale from small to global or move from private to public or shift around the globe. The gimmick of the 10 gifts merely provides a rational for grouping recent buildings and projects into smaller, digestible chunks, and allowing the architects to articulate the ideas that drive them; this is something every monograph does. Yet, just like every other monograph, many of the projects in Formgiving could be moved to other chapters without noticeably affecting the book. Heck, the "Z-Axis" chapter mentions "a skyscraper that continues the High Line into the skyline," clearly referring to The Spiral, but that building doesn't appear until "Mindpool," the sci-fi sounding chapter that wraps up the book's "Present" section.
Although I mentioned that this third book in BIG's Taschen trilogy ends with the triumvirate of planetary projects, that's literally not true. Following Masterplanet's 40 pages (it's given more space than any project in the book), are "Annexes": numerous photos of their projects built with LEGOs, some musings on film and architecture, and photographs of Formgiving on display at the Danish Architecture Center (each book, it should be noted, accompanied a major retrospective exhibition). And then, following the requisite project credits, comes an epilogue Ingels wrote in the midst of the coronavirus pandemic and yet another project: "Back to the Future," BIG's entry in the Reimagining Brooklyn Bridge competition (like the EU Mies Prizes, they were a finalist but not a winner).
With these Annexes, it seems that BIG doesn't want the trilogy to end, or doesn't know to wrap it up. Clearly they don't want this book to end with Masterplanet, which generated a bit of criticism last year — criticism Ingels anticipated when he spoke with Time magazine about the ongoing project. Will BIG's future be defined by space colonies and Hyperloops? (Oddly, BIG's Hyperloop projects are missing from the book.) Or will it be more closely aligned with Noma 2.0, another standout project in Formgiving? (It stands out for being un-BIG-like, not using BIG's familiar icons, and for being a truly inviting setting.) I'm guessing BIG wants both. They want it all. An architect doesn't coin the phrase "hedonistic sustainability" without wanting the best of both worlds — on all worlds, apparently.
SPREADS: 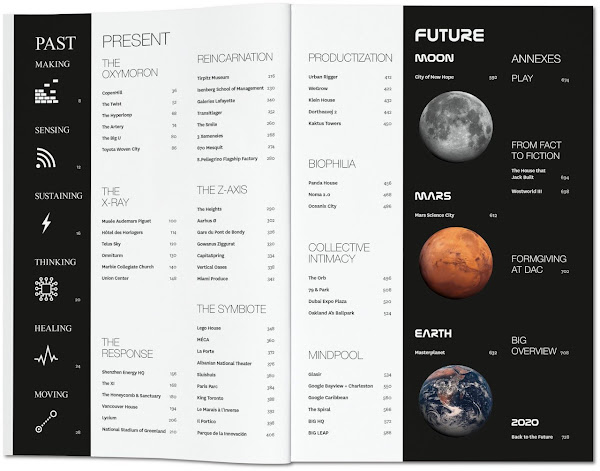 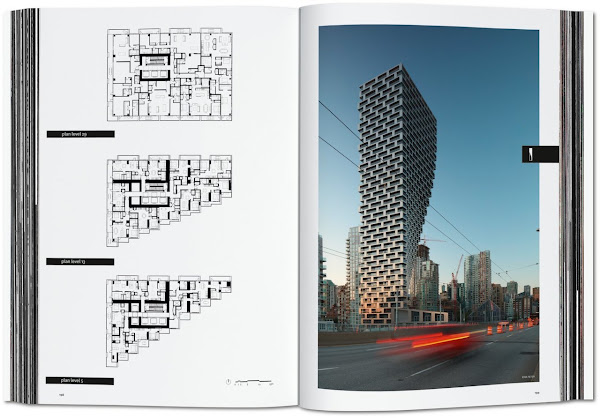 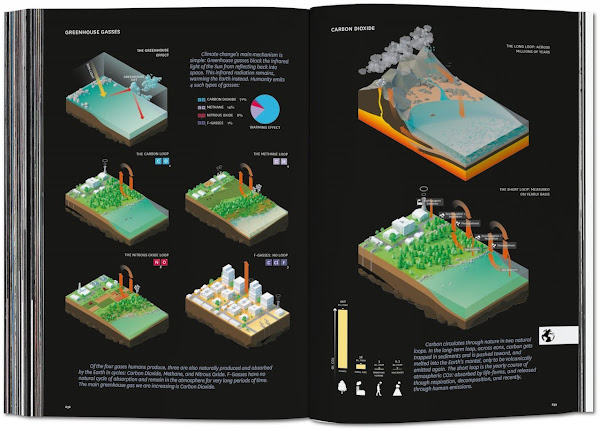 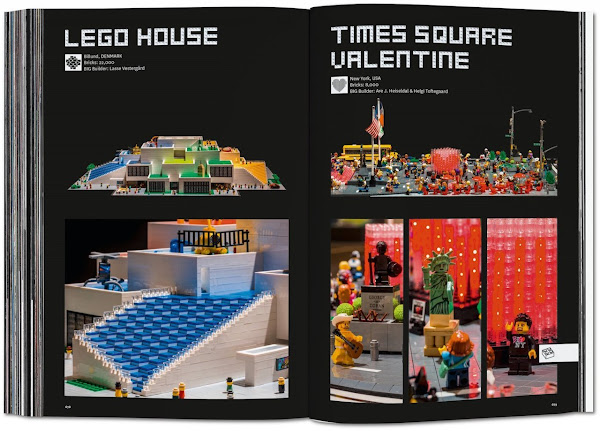 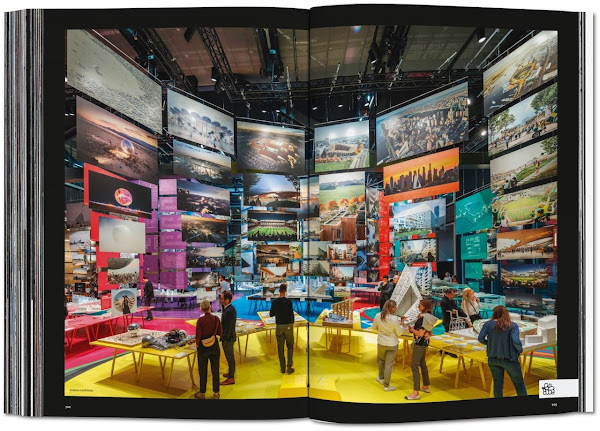