Modern Architecture and the Critical Present 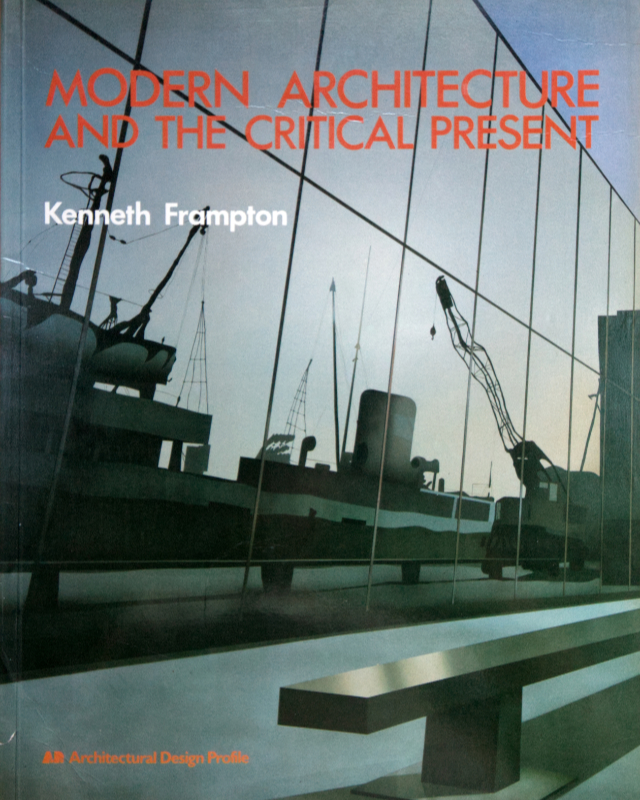 PUBLISHER'S DESCRIPTION (excerpted from the Introduction):
This issue of AD is largely devoted to a number of essays which I have written over the last five years. Comprising five separate pieces, the central thesis here is the last chapter of my book Modern Architecture: A Critical History, published by Thames & Hudson in 1980. I had originally intended to end this account of the Modern Movement with the late sixties but, at the request of the American co-publisher, a further chapter was added which ostensibly advanced the history by another decade. The main title of this chapter, "Place, Production and Architecture," was a critical reference to [Sigfried] Giedion's canonical history of 1941 [Space, Time and Architecture]; for I remain convinced that the apparent antipathy between place and production is of more consequence for architecture today than any of the parallels which Giedion once saw as linking built form to supposedly scientific models of the universe. Architecture and building seem to me to have always been bound up with place creation, whereas production – which is justifiably associated in our minds with industry – is largely indifferent to place and tends, in the long run, to be destructive of rooted culture. Consumption and planned obsolescence, these are the corollaries of modern industrialization, to such a degree that they are fundamentally antithetical to the intrinsic durability of the man-made world.
As one might expect, my unduly condensed history has encountered a mixed reception and appended to this exerted chapter is a series of reviews most of which have been specifically written for this issue. As I was directly involved in soliciting these commentaries I thought it would be more even-handed to reprint one or two notices which had already appeared elsewhere, such as David Dunster's commentary in Progressive Architecture or Bruno Zevi's review in L'Espresso.
Kenneth Frampton was born in Woking, Surrey in 1980. He studied architecture at Guildford School of Art and the Architectural Association and subsequently worked in Israel, with Middlesex County Council and Douglas Stephen and Partners (1961-66), during which time he was also a visiting tutor at the Royal College of Art (1961-64), fifth year tutor at the AA (1961-63) and Technical Editor of AD (1962-65). Now a permanent resident of the United States, Frampton has taught at Princeton University (1966-71) and at Columbia University (from 1972 to date).
REFERRAL LINKS:

dDAB COMMENTARY:
A couple days ago I reviewed the fifth edition of Kenneth Frampton's Modern Architecture: A Critical History, which arrived last year, forty years after it was first published in 1980. In my review I mentioned how Frampton's book has been "much lauded" since its publication, using the example of Modern Architecture and the Critical Present from 1982 as an example of that appreciation. This special issue of Architectural Design is a book about a book after all, and it's hardly common for an architecture book to be given such a treatment, much less so soon after being published. But reading the above excerpt from the introduction to this issue of AD reveals the book's nearly universal acclaim was not so immediate, as Frampton writes that his "unduly condensed history has encountered a mixed reception."
In this regard, Modern Architecture and the Critical Present gives a forum for some nuanced reviews of Frampton's book, and it allows Frampton to include and expand upon the last chapter of A Critical History, "Place, Production and Architecture: Towards a Critical Theory of Building," with additional essays that were not included in his original history but no doubt influenced it. As explained in the introductory excerpt above, Frampton added the last chapter at the behest of the US publisher, advancing his history close to the present. Frampton goes on to call that concluding essay "the most contentious section" of his book, and he includes a revised version of "The Isms of Contemporary Architecture" here (fourth and fifth spread below) as "an attempt to redress the imbalances of the conclusion."
Originally published for a French encyclopedia, the version of "Isms" here is notable for adding Regionalism to the other architectural taxonomies; just one year later, in 1983, Hal Foster would put Frampton's essay "Towards a Critical Regionalism: Six Points for an Architecture of Resistance" in The Anti-Aesthetic. That enormously influential essay was provoked by Frampton's participation and early departure from the 1980 Venice Architecture Biennale, curated by Paolo Portoghesi as basically a bellwether for the global spread of Postmodernism. Frampton was a staunch critic of PoMo (he uses the label "Populism" in the essay, instead of the term popularized by Charles Jencks in the 1977 book The Language of Post-Modern Architecture), and his development of Critical Regionalism (the term follows from the writings of Liane Lefaivre and Alexander Tzonis) can be seen as a recognition of local tendencies and a more honest alternative offered up to practicing architects partaking in globalization.
Beyond the essays, at least one of which made its way into the compilation Labour, Work and Architecture from 1982, the value of Modern Architecture and the Critical Present lies in the reviews of Frampton's book. These take up just fifteen pages, but they feature some notable names: Alan Colquhoun, Kurt W. Forster, Rafael Moneo, Demetri Porphyrios, Manfredo Tafuri, and Bruno Zevi, among a few others. (A handful of projects are found at the back of the book, after the -isms essay, but the issue would hardly suffer if they were omitted.) I like reading what other architects and academics thought of Frampton's book at the time, though unfortunately he left out Robert A.M. Stern's "misleading" review, which Frampton replied to in an issue of Skyline from 1981. It would be great to read the same now, but with reviews of architecture books hardly what they were forty years ago, I've only come across one review of the classic book's fifth edition. Given that the new edition is such a substantial update to the previous versions, I hope more reviews come soon, especially since it could feasibly be the last edition, given that Frampton just turned 90 and also retired from his nearly 50-year post as professor at Columbia University.
SPREADS: 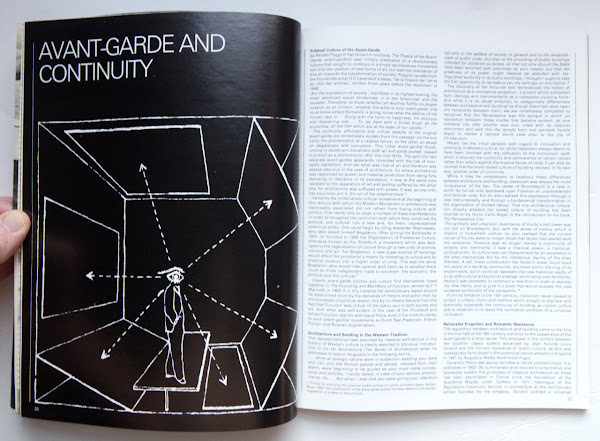 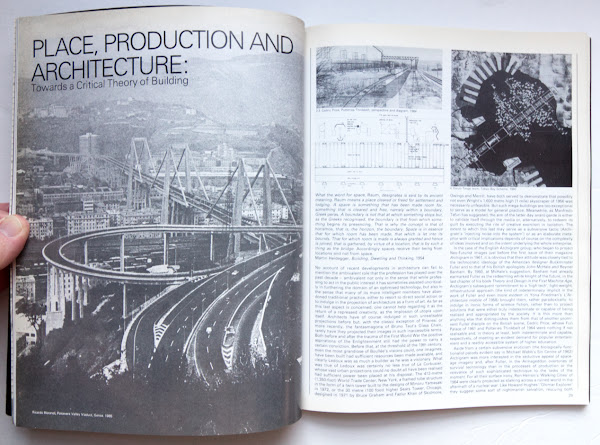 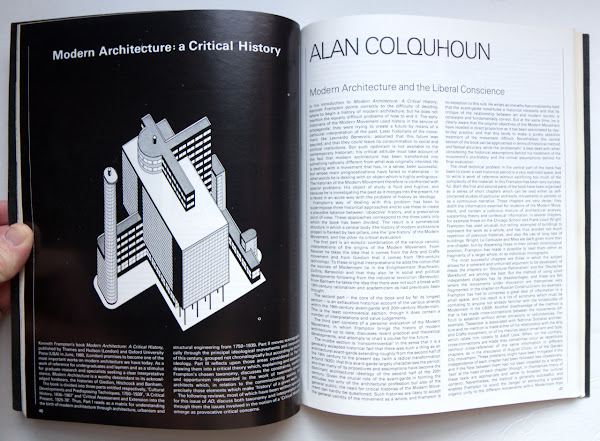 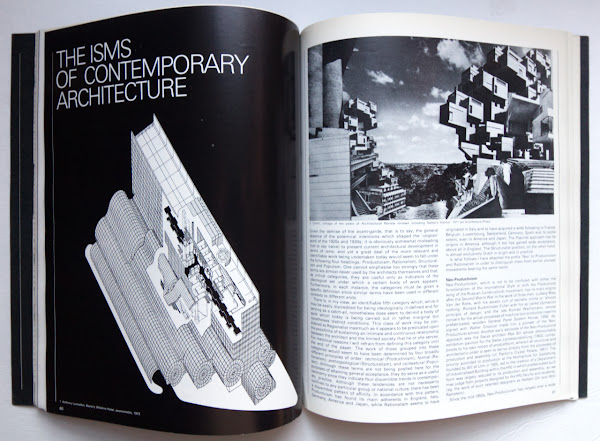 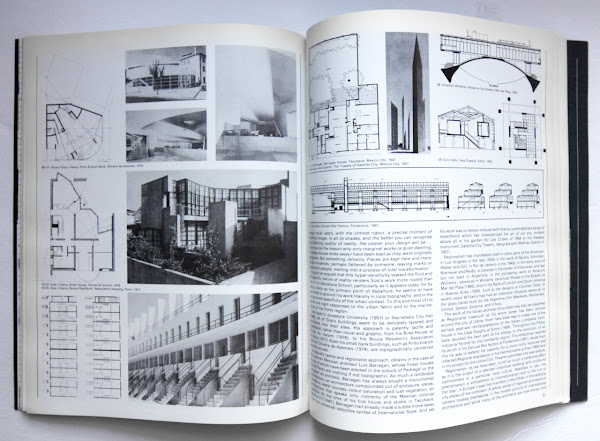