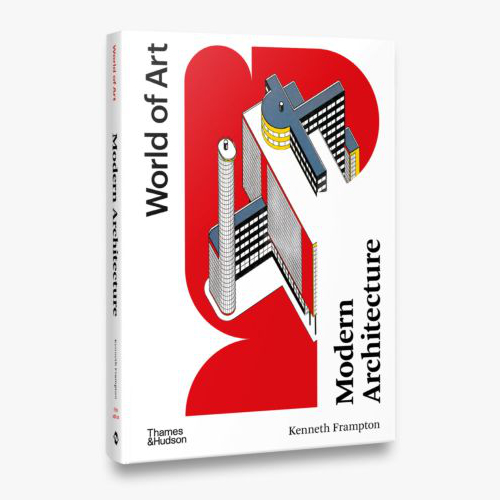 PUBLISHER'S DESCRIPTION:
Kenneth Frampton’s highly acclaimed survey of modern architecture and its origins has been a classic since it first appeared in 1980. Starting with the cultural developments since 1750 that drove the modern movement, moving through the creation of modern architecture, and exploring the effects of globalization and the phenomenon of international celebrity architects, this book is the definitive history of modern architecture.
For this extensively revised and updated fifth edition of Modern Architecture, Frampton added new chapters exploring the ongoing modernist tradition in architecture while also examining the varied responses to the urgent need to build more sustainably and create structures that will withstand changing climates. This new edition features completely redesigned interiors and an updated and expanded bibliography, making this volume more indispensable than ever.
Kenneth Frampton was the Ware Professor of Architecture at the Graduate School of Architecture, Planning, and Preservation at Columbia University, where he taught from 1972 until 2020. In 2018 he was awarded the Golden Lion of of the Venice Biennale. He is also a member of the American Academy of Arts and Letters.
REFERRAL LINKS:

dDAB COMMENTARY:
Historian Kenneth Frampton's first book, Modern Architecture: A Critical History, has been much lauded since it was first released in 1980, going through four updates across the next 40 years. Not many books can boast of having other books dedicated to them, much less just two years after publication: a special issue of Architectural Design, under the name Modern Architecture and the Critical Present, was released in 1982. It was edited by Frampton and consisted of four essays by Frampton, all of them concerning the last chapter of his book, but it also had reviews of Frampton's book written by Bruno Zevi, Rafael Moneo, and others illustrious names. There are a handful of projects selected by Frampton after the reviews, but the basic impression is that Frampton's critical history is important and worthy of its own in-depth critiques.
A decade in the making, Frampton's Critical History (it usually goes by its subtitle than its title) saw its first update a few years later, in 1985, notably amended by a new chapter on critical regionalism, an idea he first put into print in Hal Foster's The Anti-Aesthetic in 1983. That essay, "Towards a Critical Regionalism," was provoked by his participation and then early departure from the 1980 Venice Architecture Biennale, organized by Paolo Portoghesi under the theme The Presence of the Past. Frampton disagreed with the "collage-pastiche" direction of the show known for popularizing postmodern architecture, so instead of contributing to it he expanded upon the notion of critical regionalism established by Liane Lefaivre and Alexander Tzonis.
The chapter on critical regionalism was added to the last of the book's three parts, where Frampton is most "critical." The first part examines the "birth" of modern architecture from the mid-1700s to the early 20th century. The second part is the meat of the book: 27 chapters on the "life" of modern architecture, each chapter focusing on a specific architect, place, or movement. The third part — the "death" of the triumvirate — is titled "Critical assessment and extension into the present" and it does just that, bringing the book in each of its updates closer to the present. For the third edition, from 1992, Frampton added a chapter to the section, titling it "World architecture and critical practice," while the fourth edition, from 2007, added a chapter at the end: "Architecture in the Age of Globalization: topography, morphology, sustainability, materiality, habitat and civic form."
Which brings us to the recently published fifth edition, easily the most substantial update to A Critical History (and most likely its last, given that Frampton turned 90 last year and recently stepped down from his nearly 50-year post at Columbia University). The fifth edition's 736 pages and 813 illustrations more than double the 324 pages and 297 illustrations of the 1980 original. It builds upon the fourth edition, not by adding another chapter, but adding a whole fourth section to the book: "World Architecture and the Modern Movement." The chapters added to the third and fourth editions have been reworked into a postscript and a couple chapters were added to part two (one on Czech architecture and one on architecture in France), which otherwise remains as it was in the first edition. But the main draw — for those familiar already with Frampton's book, at least — should be the 250-page-long fourth part and its four chapters on world architecture.
Frampton mentions two publication-series in reference to the new chapters in his critical history: the ten-volume World Architecture 1900-2000 – A Critical Mosaic, an encyclopedic survey of 1,000 buildings put out by the China Architecture & Building Press in 2002; and the four-volume Atlas: Architectures of the 21st Century edited by Luis Fernández-Galiano under the auspices of the BBVA Foundation, which focuses on buildings around the turn of the century. The first, which I've written about before, was a massive project that had Frampton as general editor (a fact he fails to mention in A Critical History, perhaps due to his frustration over its poor distribution) and other editors for each geographical volume (I have half of the ten volumes and hope to someday collect them all). In regards to the second, Frampton adopts the geographical mega-regions of the Atlas series in the four chapters of part four: The Americas, Africa and the Middle East, Asia and the Pacific, and Europe.
Critical regionalism basically posits that buildings infused with an awareness of local conditions through design, selection of materials, and construction are preferable to both the universalizing tendencies of International Style modernism and the scenography of postmodernism. If one were to read Frampton's book in order, the new section follows immediately, and logically, after the chapter on critical regionalism. The new section takes Frampton's ideas on critical regionalism and applies them to the four international mega-regions, loading each chapter with projects: the most commendable designs by architects working in certain countries. Last is the book's postscript, an argument for landscape-based megaforms that, like critical regionalism, go against the tendencies of architectural commodification and developments sprawling far outside city centers. Here, Frampton recognizes the urgency of climate change and the need for architects to reconsider how their buildings relate to nature. It's a sobering, yet unsurprising ending to a magisterial work that maintains its relevance decades after its first edition.
SPREADS: 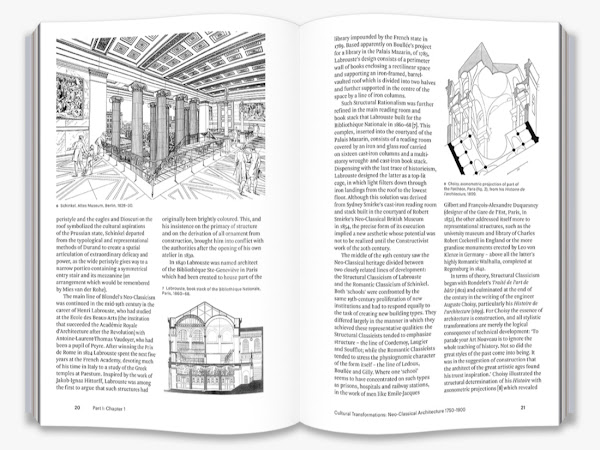 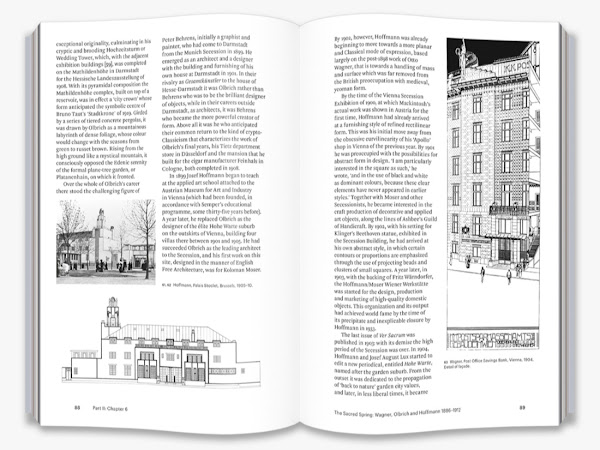 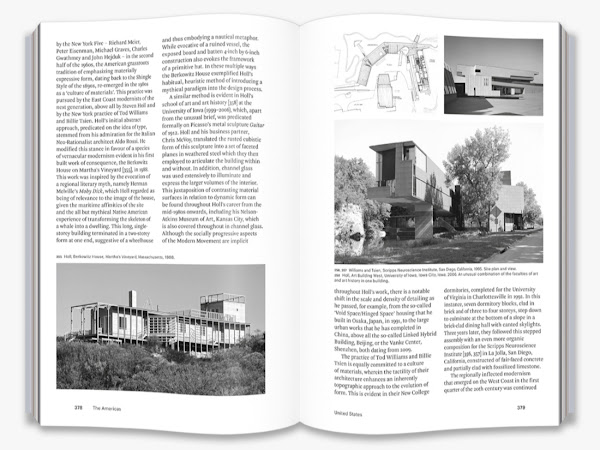 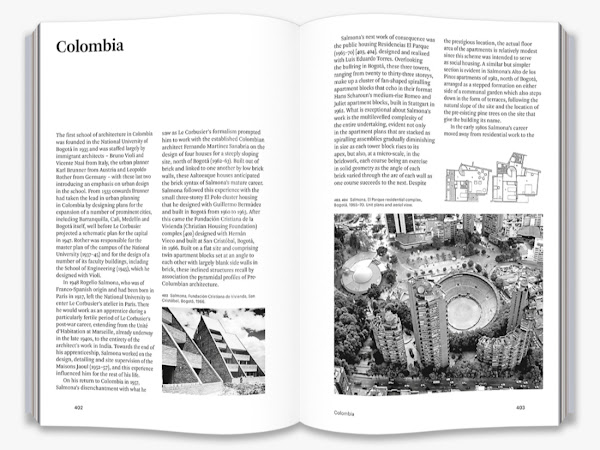 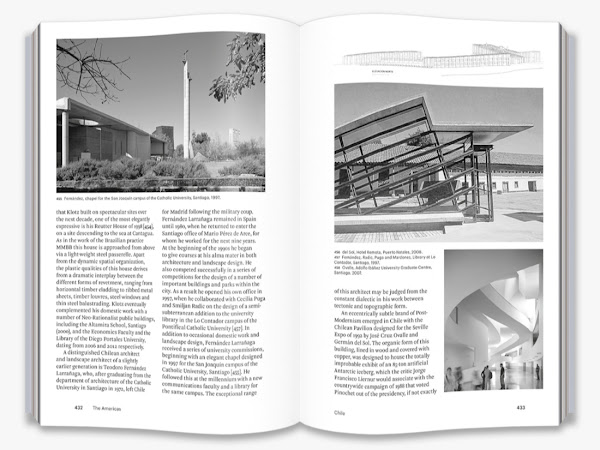