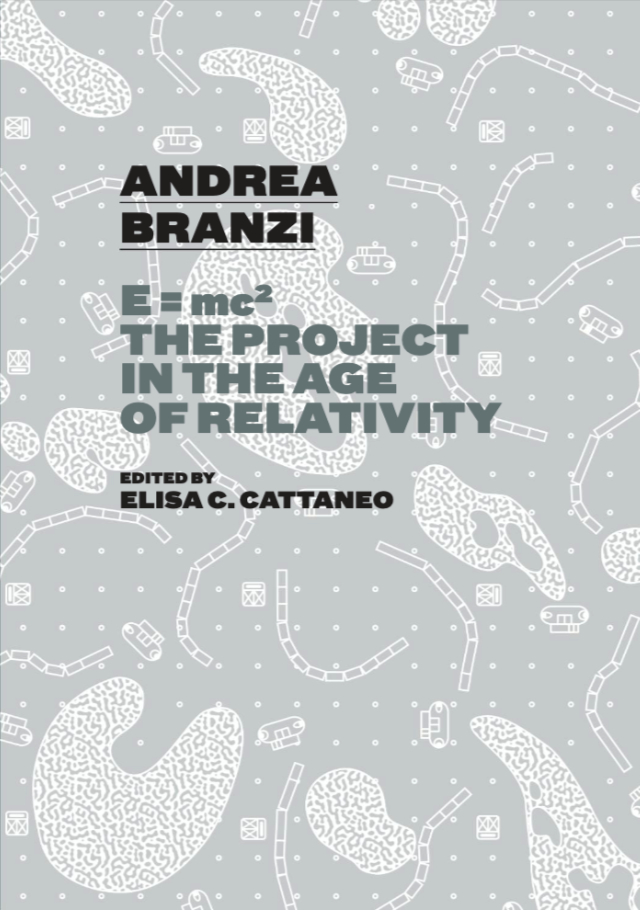 PUBLISHER'S DESCRIPTION:
From radical research to contemporary design, this book collects Andrea Branzi’s work about city-design and a new opportunity to interpret and anticipate the next dynamics of society. Territories that are conceptual categories, through spaces that are offered up by reality such that design can act and perform cognitively: in this sense, the city becomes a critical concept capable of overcoming its own image. Each passage presents a precise anthropological articulation: from the concept of commodity civilization of the Sixties to that of immateriality, from the concept of the metropolis to that of the anthropological territory, in which the infinitely small and the immensely large coincide, to the point of generating and passing beyond our commonly held concept of the city.
The publication begins from Andrea Branzi’s reflection on the relationship civility-design, from the Radical’s research on mass-production civilization to the “infinite territories”, proposing new territories able to interpret and anticipate the new dynamics of society. In particular, if the first chapters review the historical/critical works of Andrea Branzi and of Radical Movement, the last opens a new parenthesis of research, right now never expressed: the issues ignored by Modernity, like life, death, destiny and the sacred: themes which underline the new drama and the fracture between tragedy and normality, between consumerism and death, between theology and technology, between the silence of reason and the voice of an irrational reality.
Andrea Branzi lives and works in Milan. Protagonist and theorist of Radical Movement Archizoom, he is dedicated to theoretical research and to the promotion of culture. He’s author of numerous theoretical and historical books. Elisa Cristiana Cattaneo researches experimental ecological design and its theoretical implications, to generate new territories of imagination. In particular, considering the design as a “weak” field evolvable and renewable through new transdisciplinary approaches.
REFERRAL LINKS:

dDAB COMMENTARY:
Archizoom was founded in Florence in 1966 by architects Andrea Branzi, Gilberto Corretti, Paolo Deganello, and Massimo Morozzi, later joined by designers Dario Bartolini and Lucia Bartolini. The name was derived from Zoom!, the fourth — and most famous — issue of Archigram's numbered zines. Along with Superstudio, which was formed by Adolfo Natalini and Cristiano Toraldo di Francia also in Florence and also in 1966, these three comprised the most influential and visible of the 1960s utopian radicals in architecture. Numerous books have been written about each group, though not nearly as many as the books written by the members of Archigram, Archizoom, and Superstudio themselves, both then and since. A new addition to the latter is Andrea Branzi's impressive E=mc2, which is like a monograph, historical archive, and theoretical treatise on cities in one large package.
The book is organized into four "sessions": (1) "Commodity Civilization: The Radical Movement and the Season of the Announced Deaths," (2) "No-Stop City: The Infinitive Metropolis and the Hypothesis of a Non Figurative Language," (3) "Weak and Diffuse Metropolis of the Second Modernity," (4) "Territories for a New Urban Dramaturgy." Following a lengthy, analytical "Session 0" essay by book editor (and archivist and co-translator and co-proofreader!) Elisa C. Cattaneo, the sessions are comprised primarily of texts written by Branzi between 1966 and 2017, with clusters in the late 60s/early 70s, ca. 2006, and the 2010s. Even though each chapter includes texts written within the last decade, there is a noticeable chronological arc throughout the whole book, such that it covers Archizoom in the first two sections, moves on to Branzi's post-Archizoom work in the third, and then ends with propositions for the future.
Although E=mc2 is profusely illustrated, there is a lot to read in its pages. Most of the texts are in English, though some are in Italian and English, and a small amount are in Italian only, a situation that arises from facsimiles of original sources included in the book, either on full pages or smaller sheets inserted into the book (the last three spreads, below, hint at the latter condition). A standout facsimile is found in Session 2, with 27 essays Branzi contributed to Casabella between 1972 and 1976: "Radical Notes," as the regular series was called. The rest of that section focuses on Archizoom's most famous project, No-Stop City, seen in more pages pulled from Casabella but also in numerous drawings and models. These archives are a treat for someone like me, who had only the most cursory knowledge of such projects beforehand, but they also set the scene for the second half of the book, which is more contemporary and polemical.
Branzi proffers "weak urbanization" in the third session, in distinction to "the strong and concentrated modernity of the twentieth century." Many short texts written in the 1990s and 2000s argue for non-figurative architecture, mainly in response to the virtual spaces of technology. The essays are accompanied by a few of Branzi's urban projects (Agronica, Bosco d’Architettura, 2010 Venice Architecture Biennale, etc.) that exhibit an almost Broadacre-like vision of cities, with roads and green spaces extending into the horizon through the use of mirrors. Session 4 has more projects and essays, the first culminating in a gatefold of "Ten Modest Advices for a New Athens Chart" (only in Italian, unfortunately) and the second in a "Probable Autobiography" inserted into the book on smaller pages. The latter, coming before a few external contributions, is a satisfying end to a book that functions like a heady, collaged version of an autobiography — one from a life of prolonged, compelling ideas on cities.
SPREADS: 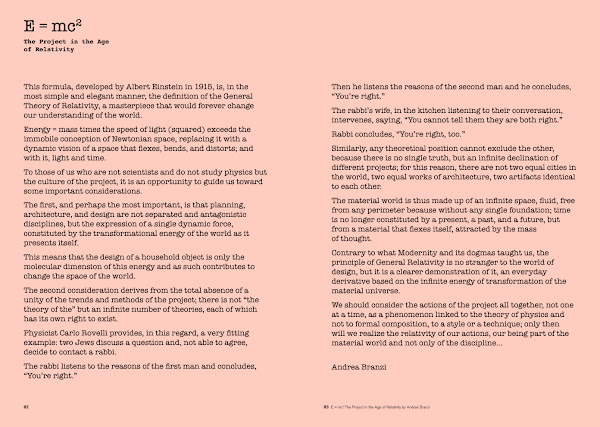 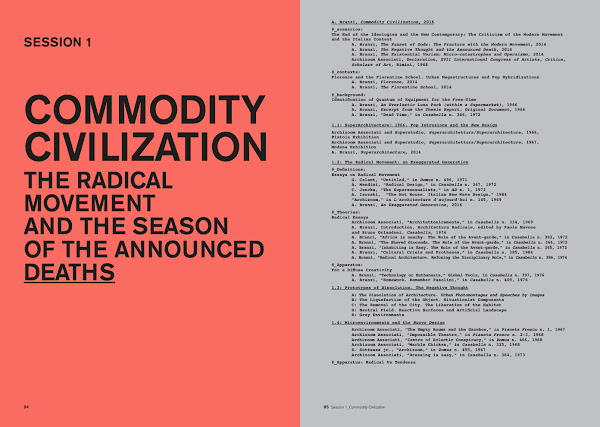 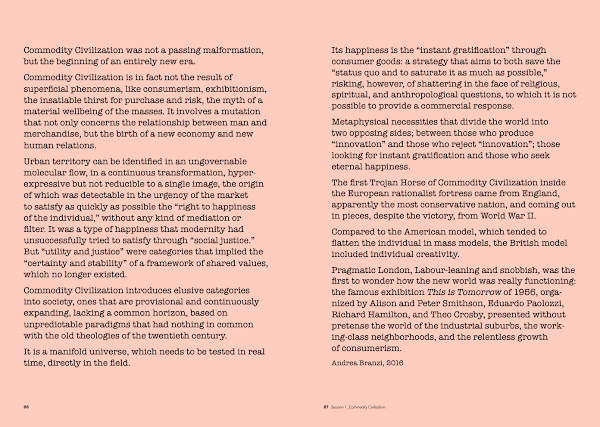 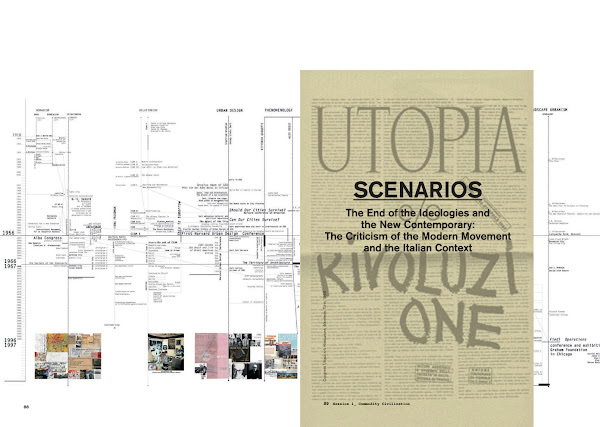 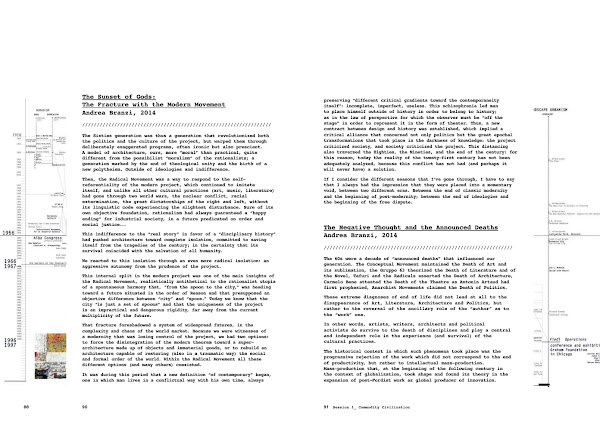 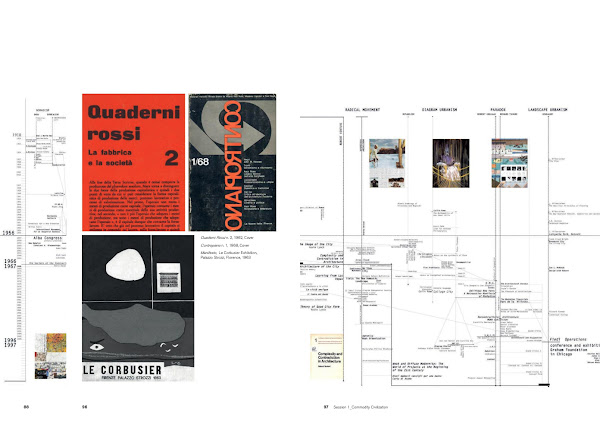