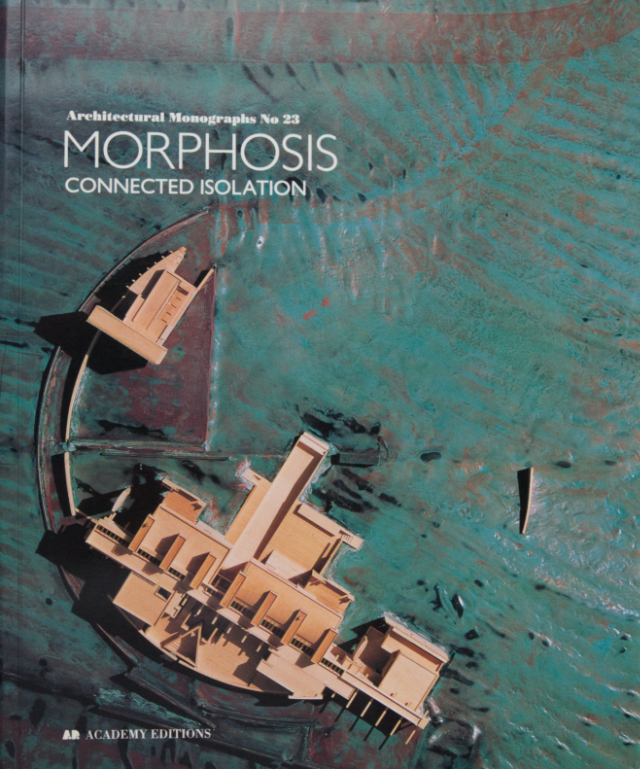 PUBLISHER'S DESCRIPTION:
International recognition and commissions world-wide have not altered the need of Morphosis to draw polemical strength from the complexity of Los Angeles. Each new work continues to reflect an evolving response to the contextual issues first encountered there. As Morphosis principal Thom Mayne has said, it is a city in which 'the question of diversity becomes even more confusing because any interest in an idiosyncratic event simply repeats the status quo. In the midst of isolation, true diversity occurs in a connective middle ground. The expression of conflict thus becomes the most optimistic statement of what we can be as a culture, and is the most challenging stance to take.' Such awareness of place and its global extensions are revealed in this Monograph as a continuous concern linking earlier work, such as the Sixth Street and Venice III houses, with the recently completed Crawford house and Salick Healthcare Building in Los Angeles, as well as the Higashi, Nara, and Chiba projects across the Pacific. All of these serve to extend a contemporary redefinition of the meaning of social conditions.
Morphosis – Connected Isolation features an essay by Thom Mayne as well as a collection of projects, many of which are presented here for the first time, in order to provide a penetrating view of a firm that has captured the imagination of students, professionals and the public alike.
Architectural Monographs have enjoyed a positive critical response since first being launched over ten years ago, and have now been revised in an enlarged format. Often the first major publication on the work of a particular architect or firm, these books focus on individuals of international standing, who have been influential in education and practice. Including both built and unbuilt projects, each Monograph is an invaluable record of the works of the architect presented, and important source material for further study.
REFERRAL LINKS:

dDAB COMMENTARY:
In my review yesterday of Thom Mayne: SculpturalDrawings, I mentioned Connected Isolation as a superior format for displaying the drawings, models, and other process-oriented output of Mayne's firm, Morphosis, in particular the work from the early 1990s. The larger page size and occasional full-bleed images in this 1993 monograph provide much more detail than the Tchoban Foundation book, which is split roughly in half between early and recent works. Architects who have Connected Isolation will no doubt agree, but those who want to buy it might be stymied by its elevated price tag ($220 and up on Amazon) that is indicative of today's misguided online marketplace. Rareness does not equal desirability, but with small print runs for most architecture books, the prices of out-of-print books such as Connected Isolation are out of alignment with their actual worth. To wit, this book, aka Architectural Design's Architectural Monographs No. 23, can be had from William Stout Architectural Books for $50, not much higher than its original cover price.
Connected Isolation was one of the few non-textbooks I bought in architecture school as a poor student. Morphosis was incredibly influential on me and my classmates back in the early 1990s, and this monograph was fodder for the design sense of Mayne and then-partner Michael Rotondi, but also for the book's focus on process. A case in point is the documentation of the Crawford Residence, which was completed a few years before the book's publication. Even so, across its twelve pages are photos of models and "drawdels" (second spread, below), and numerous plans and sections, but just a handful of photos not much bigger than a postage stamp. It is as if architecture is process, not product. So photos are played down in favor of the rest; so photos of completed buildings are tiny on the page or, in the case of Cedar's Sinai Comprehensive Cancer Center at the start of the book, they are partially covered by models and drawings.
This last point gets at one idea the early 1990s were all about, at least in architecture and graphic design: layering. Just as AutoCAD was shifting drawing from the hand to the mouse and screen, QuarkXPress pushed graphic designers into the digital realm. The software enabled text and drawings to be layered much more easily than with literal cut-and-paste techniques. In turn, there was experimentation in publishing, of which architectural monographs were ripe, given their abundance of images. Connected Isolation is a good example of this. It features two types of text (dark to be read, gray as background) in narrow columns in Mayne's introductory essay and in the brief project descriptions. The text is often layered over photos of drawings, requiring a typographical shift from black to white — sometimes within an individual letter! Drawings, as mentioned, are also layered over photos, be they completed buildings or models, and sometimes covered partially by photos of models; the drawings become just another graphic element for composition or effect, bypassing their role as design representations to be understood.
Ultimately this book is all about the models, which take up more square inches on the page than other images and still, all these years later, look incredible in terms of craft, execution, materials, and documentation. Memories flood back as I look at them: of the smell of Bondo permeating the corridors of Seaton Hall late at night as my classmates made site models similar to Chiba Golf Club (third spread); of my own failed attempts to make a section model like Artspark (fourth spread); and of me spending way too long looking at Connected Isolation instead of working on my studio projects. In hindsight, no wonder I'm more interested now in making books than making buildings.
SPREADS: 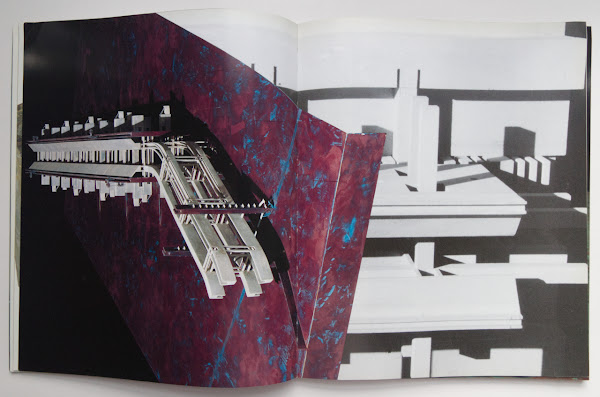 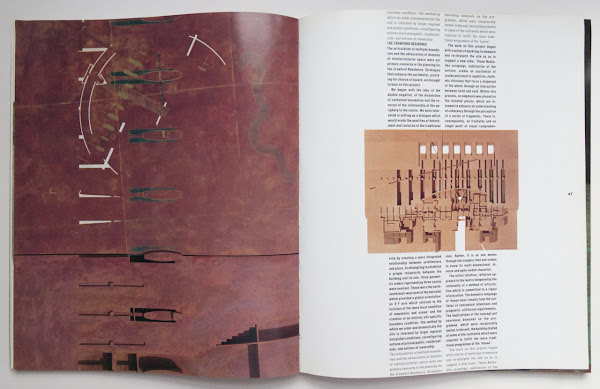 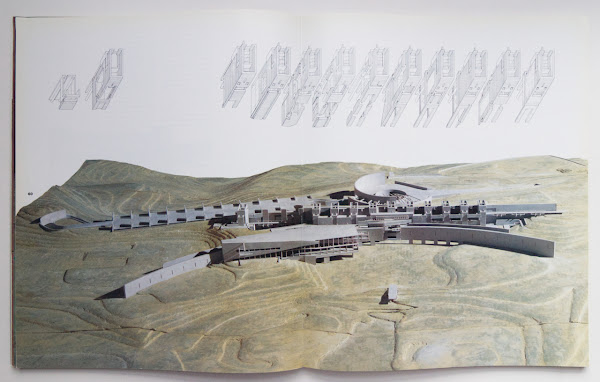 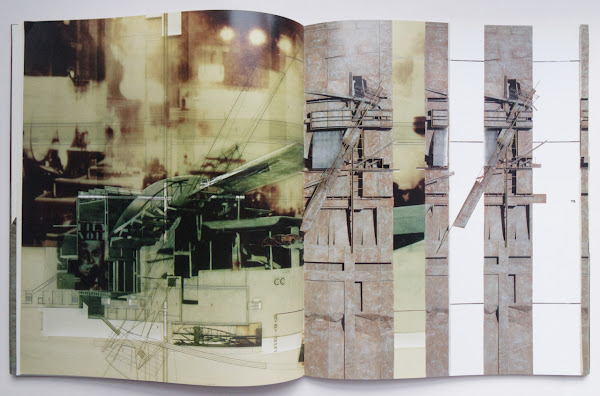