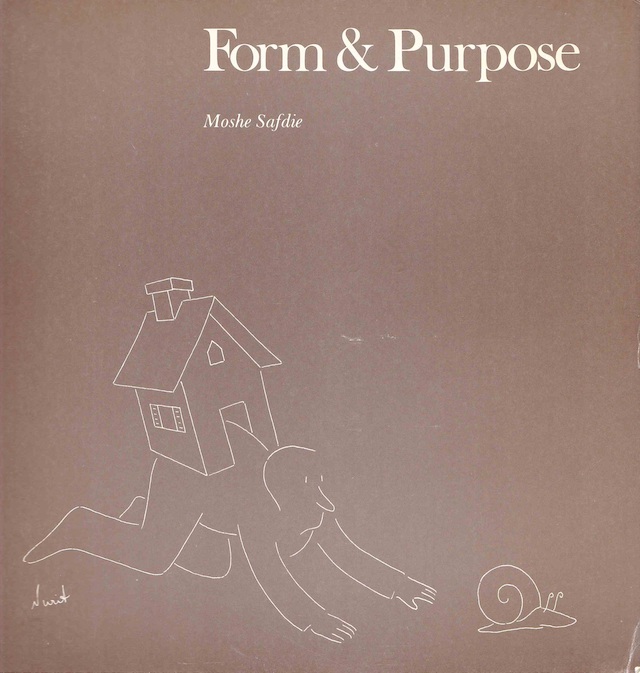 dDAB COMMENTARY:
Forty years before his latest book, With Intention to Build, architect Moshe Safdie wrote Form and Purpose, a little known publication compared to his books Beyond Habitat, For Everyone a Garden, and The City After the Automobile. Form and Purpose was written by Safdie with John Kettle (also his editor on Beyond Habitat) on the occasion of the 1980 International Design Conference in Aspen, for which Safdie served as chairman. The title/theme chosen for the conference and the book given out there "was to be primarily a platform for debating the issues facing architecture," per Safdie's introduction in the book. "The conference soon became one of diversified concerns," he continues, "an attempt to explore the full range of issues relating to form and purpose." It was "concerned more with raising questions than with offering answers" and was "meant to provoke, to raise issues that are relevant to our understanding of the subject, and to serve as a catalyst for the presentations and discussions the conference will offer." It was to be followed by another publication, Form and Purpose, Aspen 1980, summarizing the proceedings, but best I can tell that book was never published.
Although they are both square in format, Form and Purpose and With Intention to Build are very different books, mainly because the latter is full of projects designed by Safdie's office, while the former is devoid of them entirely. Nevertheless, each book conveys some of the main ideas that have driven Safdie over his long career: finding inspiration in nature and history; embracing a humanism that is cognizant of individual experience; and designing with grand ambitions that have led to big — some may say over-sized — projects. An interesting parallel between the two books is found in Safdie's correspondences. The documentation of the Columbus Center project in With Intention to Build includes a couple of letters/editorials Safdie wrote to the New York Times in response to criticism over his design; one is mainly comprised of a passage by Bruno Zevi, while the longer one is all Safdie. His comfort in penning long opinions is echoed in the first pages of Form and Purpose, which features a letter Safdie wrote to Philip Johnson in 1978, just after the latter's design for the AT&T Building was released to the public. Safdie's "rather long-winded" letter, signed "with much friendship and warm wishes," politely derides Johnson's design. Johnson replied with his own letter, also in the book, a much shorter one that acknowledged Safdie's points but actually considered his AT&T Building to be aligned with them.
The inclusion of the letter in the introduction to Form and Purpose can be seen as one of the many pieces in the book meant to provoke and serve "as a catalyst for the presentations and discussions" in the conference. This was 1980, after all, and debates over what form(s) buildings should take were being waged all over architectural media. If a photomontage Safdie put in his book (below) is any indication, Postmodernism was facing off against Modernism, with a model for Johnson's AT&T Building rising over Charles Moore's Piazza d'Italia on one page, and a glassy Portman building and a Metabolist masterpiece on the opposite page; the towers of Oscar Neimeyer's National Congress in Brasilia are the hinge between them. If anything, the collage expresses how a city full of architectural icons would equate with chaos, noise. Background buildings, as they're often dismissively called, are needed — to temper strong architectural statements and give city dwellers some psychic relief. Safdie's words at the end of the book, in which he recounts correspondences he had with Iranian architect Nader Ardalan, summarize a similar take on architecture and cities: "He who seeks self-expression shall fall into the pit of arrogance / Arrogance is incompatible with nature / Through nature, the nature of the universe and the nature of man, we shall seek truth / If we seek truth, we shall find beauty."
SPREAD (photo montage by David Linz): 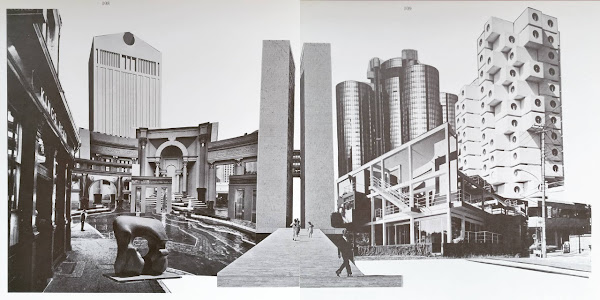