The Making of a Modern Japanese Architecture 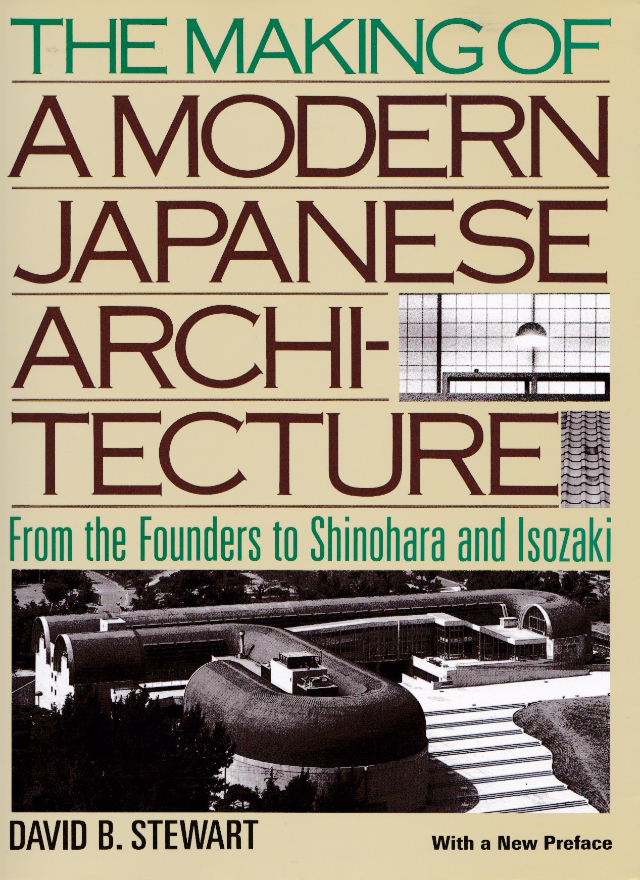 The Making of a Modern Japanese Architecture: From the Founders to Shinohara and Isozaki
David B. Stewart
Kodansha International, 2003

PUBLISHER'S DESCRIPTION:
The year 1988 commemorated the fourth generation since the Meiji Restoration of 1868 defined Japan's position-political, economic, and cultural-in the modern world. This period of history, which witnessed the rise, defeat, and rebirth of contemporary Japan, has been widely written about. Nevertheless, there remains, in the realm of architecture, an intractable gap in our knowledge of this span of more than a century. It is precisely that breach which Making of a Modern Japanese Architecture(with its more than 400 illustrations) undertakes to repair. It brilliantly charts the course of the art of building in this very old and yet, in a sense, quite new country from the middle of the nineteenth century to the onset of the 1980s.
The book successfully sets before the reader, and illustrates in striking manner, the sea change that Japan's architecture underwent as feudal customs and an intense preoccupation with beauty encountered industrialization and modern lifestyles. By what means, then, was the switch-over made from homes of paper and wood to efficient urban complexes of earthquake-proof reinforced concrete? The answer, during the Meiji era, was gaslighting and brick, followed in the second and third decades of the new century by an interval of Art Deco and jazz-age freneticism. On account of his controversial rebuilding of the great Imperial Hotel, the American architect Frank Lloyd Wright was a participant in these years of so-called Taisho Democracy. Wright was more often than not present in the Japanese capital during this phase of his career, which he lived to the hilt by pursuing his instincts as a connoisseur and an aesthete of the first order. When he was, eventually, dismissed, his versatile assistant, the Czech modernist Antonin Raymond, stepped into the vanguard of Japanese architecture, a position which in many respects he retained well into the 1950s.
David B. Stewart was born in Washington, D.C., and educated at the Universities of Pennsylvania and London. He has taught in Japan as Visiting Foreign Professor at Tokyo Institute of Technology since 1975. Before that, he was a member of the editorial staff of L'Architecture d'aujourd'hui, in Paris, and has also worked as archivist for an international agency with headquarters in Paris and Washington. He was trained as an architectural historian at the Courtauld Institute of the University of London by the late Professor Sir Nikolaus Pevsner, under whose supervision he earned his Ph.D.
REFERRAL LINKS:

dDAB COMMENTARY:
Two book reviewed earlier in the week prompted me to grab David B. Stewart's The Making of a Modern Japanese Architecture off my shelf: Old Is New: Architectural Works by New Material Research Laboratory by Hiroshi Sugimoto and Tomoyuki Sakakida and 1972 - Nakagin Capsule Tower
Noritaka Minami. Although the first is a monograph on a contemporary practice, it informed me of a movement I never knew existed: the Bunriha Kenchiku Kai (Secessionist Architecture Society), which formed in 1920 and is therefore considered the first modern architecture movement within Japan. The book further describes Sugimoto's influences, including architects Togo Murano, Isoya Yoshida, and Sutemi Horiguchi, the last of which was a founding member of the short-lived movement. Combined with Minami's book on Kisho Kurokawa's famed Nakagin Capsule Tower, I had a few excuses to dip into parts of Stewart's book, one I bought many years ago but have yet to tackle cover to cover.
The paperback of The Making of a Modern Japanese Architecture was released in 2003, fifteen years after the hardcover first edition. In the preface to the paperback edition, Stewart explains that outside of the new preface itself there are no changes between it and the hardcover. Furthermore, he points out that he wrote the book "with a 10-year perspective," meaning the last work in the book, Kazuo Shinohara's House in Uehara, dates to 1976. Although much happened in that ensuing decade — even more so in the quarter-century between that house and the paperback edition — it matters little, since the focus of the book, as the title makes clear, is on the "making of" modern Japanese architecture. As such, it is most revealing and helpful in respect to buildings from the first half of the 20th century and the "founders" who designed them. That is where Horiguchi, Murano, Yoshida and others are found, while Kurokawa, Shinohara, Isozaki and other postwar contemporaries fall into the second half of the book.
Stewart's brief explication of Bunriha Kenchiku Kai is found in chapter five, "Tokyo and the Beginnings of 'Modernism'," which comes after a couple of chapters involving Frank Lloyd Wright and therefore focuses on the second and third decades of the 20th century. The Vienna Secession made its way into Japan through the magazine Kenchiku-zasshi as early as 1913, with buildings influenced by Joseph Maria Olbrich and other Austrians appearing soon after. Such buildings as Riki Sano's Seitoku Memorial Gallery in Tokyo's Meiji Shrine Garden were "in a sense devoid of nationality" to Stewart and were opposed by "the romantically conceived Bunri Ha [sic] Kenchiku Kai." Stewart places a photograph of Sano's gallery opposite images of four clearly expressionistic projects from the Japanese Secessionists (first spread, below), who were active for just eight years, from 1920 until 1928. Although the Bunriha members built little in those years, for Stewart "the ultimate contribution of the movement was to have prepared the terrain for arrival of the International Style as a new language," as in Horiguchi's Weather Station on Oshima Island (right page of second spread).
Of the 356 numbered illustrations (there are many more images than that number, given how multiple images are often given just one number), 101 of them are in the next, sixth chapter, "Rationalism and Lifestyle: The Thirties through the End of the War." With more images — and therefore projects — than any other chapter, this chapter is the book's most valuable one, especially since very little of its contents were documented in English-language publications at the time. When Stewart first published the book in 1988, the postwar architecture of Kenzo Tange, Kurokawa, and others was well known around the world, but not that of Murano, Horiguchi, and the like. That's still the case today and all the more reason to pick up this book if your interests gravitate to modern Japanese architecture of that period. The third and fourth spreads show buildings by Yoshida and Murano, respectively, both of which fall into the heavily illustrated sixth chapter.
Chapter seven, "Ins and Outs of Postwar Urban Rhetoric," signals a clear progression to postwar architecture, so here we find Tange, "The West's Favorite Japanese Architect," as well as Kurokawa's Nakagin Capsule Tower (fifth spread), a building Stewart contends "reflects the throwaway quality of Tokyo architecture" through its "cluster of prefabricated capsule dwelling units." Shinohara and Isozaki, the two figures Stewart describes as "the most important architects of the 1960s onward" and who therefore made it into the book's subtitle, comprise much of the book's last two chapters, nine and ten: "Technology, Metaphor, and the Resurgence of Japanese Space" and "The Present: Between MAniera and Sachlichkeit." Shinohara's mainly houses (second-to-last spread) are in abundance, while for Isozaki it is grander public and commercial buildings (last spread) that predominate. Much has been written about these two architects since 1988, but this book is nevertheless valuable for Stewart's thorough analysis of their buildings not long after they were completed — and before a new generation of Japanese architects would dominate the scene.
SPREADS: 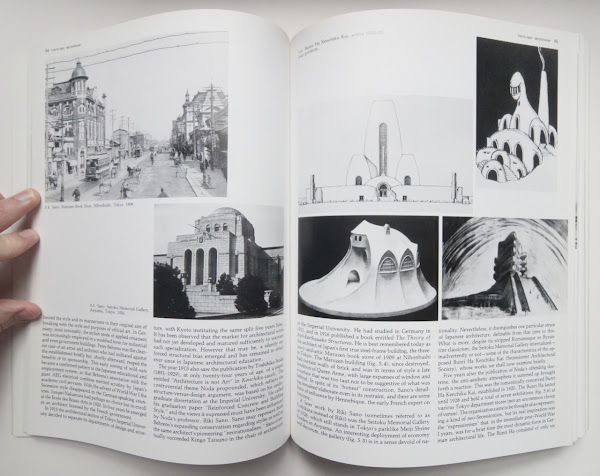 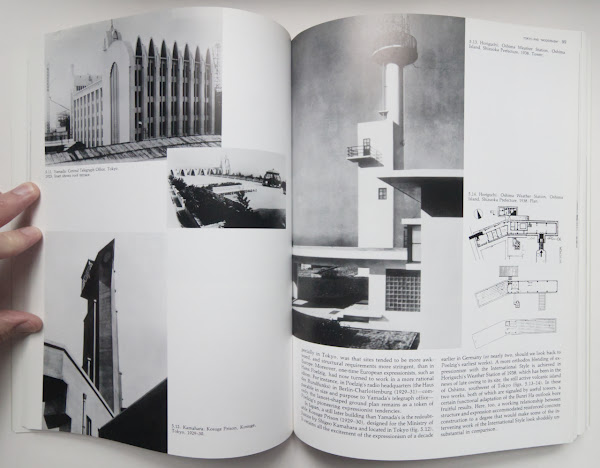 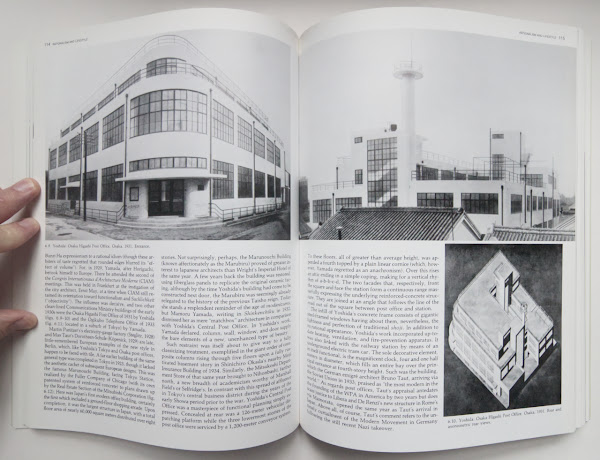 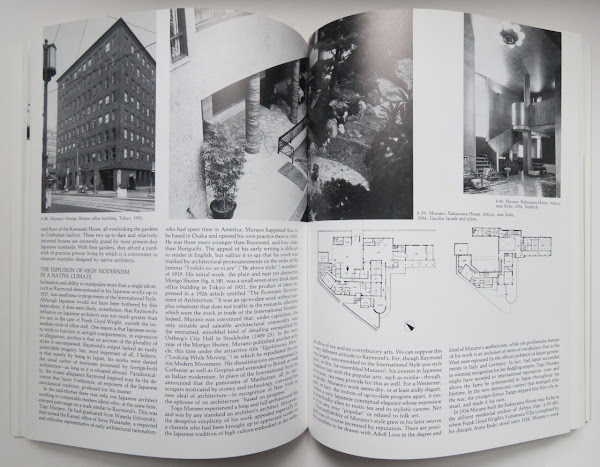 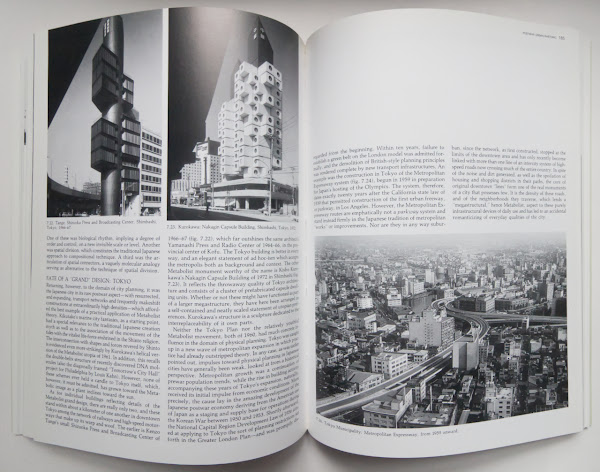 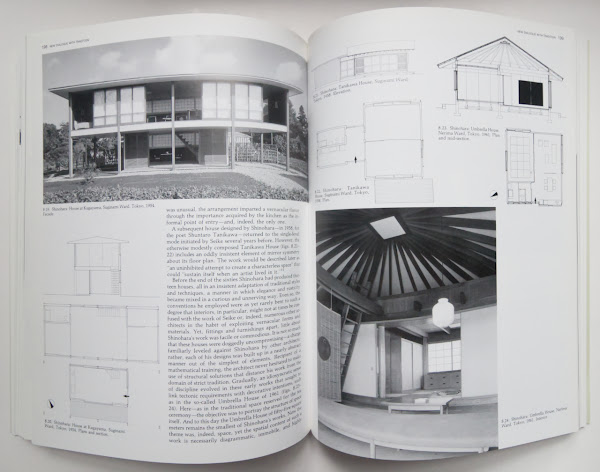 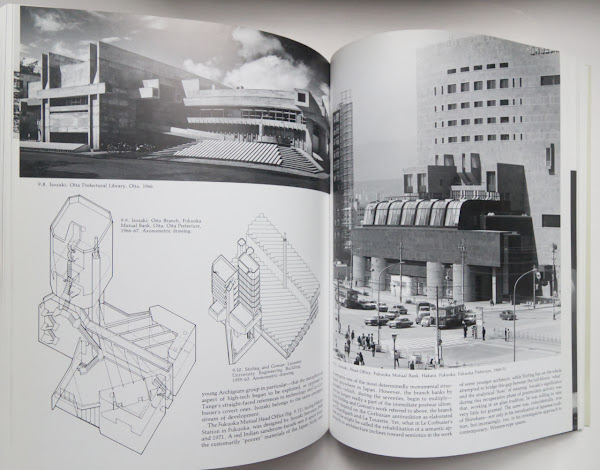