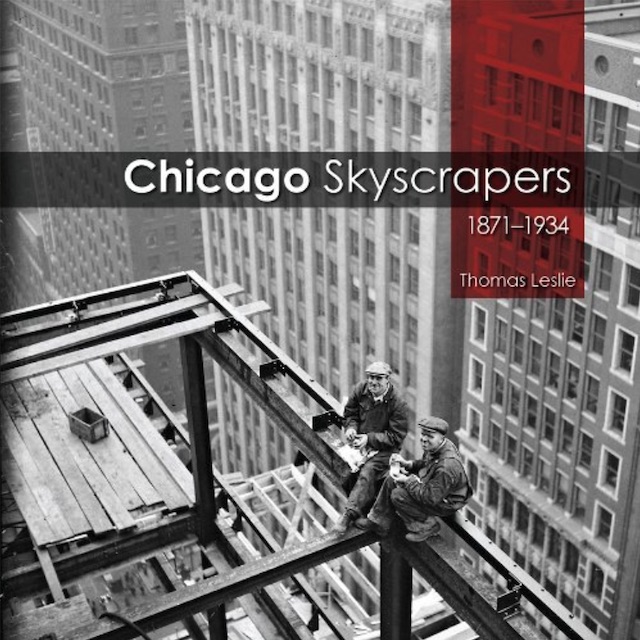 PUBLISHER'S DESCRIPTION:
For more than a century, Chicago's skyline has included some of the world's most distinctive and inspiring buildings. This history of the Windy City's skyscrapers begins in the key period of reconstruction after the Great Fire of 1871 and concludes in 1934 with the onset of the Great Depression, which brought architectural progress to a standstill. During this time, such iconic landmarks as the Chicago Tribune Tower, the Wrigley Building, the Marshall Field and Company Building, the Chicago Stock Exchange, the Palmolive Building, and many others rose to impressive new heights, thanks to innovations in building methods and materials. Solid, earthbound edifices of iron, brick, and stone made way for towers of steel and plate glass, imparting a striking new look to Chicago's growing urban landscape.
Thomas Leslie reveals the daily struggles, technical breakthroughs, and negotiations that produced these magnificent buildings. The book includes detailed analyses of how foundation materials, framing structures, and electric lighting developed throughout the years, showing how the skeletal frames of the Rookery, Ludington, and Leiter Buildings led to the braced frames of the Masonic Temple and Schiller Building and eventually to the concealed frames of the City Opera, Merchandise Mart, and other Chicago landmarks. Leslie also considers how the city's infamous political climate contributed to its architecture, as building and zoning codes were often disputed by shifting networks of rivals, labor unions, professional organizations, and municipal bodies.
Featuring more than a hundred photographs and illustrations of the city's physically impressive and beautifully diverse architecture, Chicago Skyscrapers, 1871–1934 shows how during these decades, Chicago's architects, engineers, and builders learned from one another's successes and failures to create an exceptionally dynamic, energetic period of architectural progress.
Thomas Leslie, AIA, is the Pickard Chilton Professor of Architecture at Iowa State University and the author of Louis I. Kahn: Building Art, Building Science.
REFERRAL LINKS:

dDAB COMMENTARY:
Donald Friedman, in his excellent The Structure of Skyscrapers in America, 1871–1900: Their History and Preservation, points out Thomas Leslie's Chicago Skyscrapers, 1871–1934 as a "recent study that includes thorough discussion of structural and constructive technologies," as opposed to more prevalent architectural histories that focus on aesthetics, politics, planning, social history, and other issues with tall buildings. I've owned Leslie's book for a few years, having bought it and other books on Chicago architecture when I was in the midst of researching and writing a guide to the city's contemporary architecture that was just released, though it was not a book I read from cover to cover. Friedman's book gave me an excuse to dive into parts of it, while Leslie's four-year-old book talk at the Skyscraper Museum (embedded below) gave me some ideas on where exactly to dive in.
Leslie's book, like Friedman's, starts in 1871, but unlike Friedman's upper limit at the turn of the century, Leslie goes all the way to the Great Depression. With its focus on Chicago, this means Leslie's book isn't purely a history of the Chicago School of Architecture, since it encompasses taller buildings that departed dramatically from that so-called "school" popularized by Carl W. Condit. Leslie mentions in the book talk (around the 13:00 mark) how Condit took issue with buildings that came after those in the 1890s, such as the Reliance Building (Burnham and Root, 1895), because the large expanses of glass and other definable features gave way to more masonry, in turn making those buildings "unforgivable." But Leslie finds something intriguing in the facades of Chicago skyscrapers over those 63 years: hints at what is happening underneath structurally but also even subtler hints at the machinations behind the buildings (e.g., building codes being written with the input of trade unions). It's telling that, whereas the appendix in Friedman's book lists types of structure, framing and walls, the appendix to Leslie's book has columns devoted to "facade type" and "foundation" but not framing.
A standout in Leslie's book talk is the Tacoma Building by Holabird & Roche (starting at 26:36), which was built in 1889 but torn down in 1929, a couple years before the more famous Home Insurance Building — designed by William Le Baron Jenney in 1884 and considered to this day the first ever skyscraper — was knocked down. Leslie, like Friedman, considers the Home Insurance Building a hybrid structure rather than a true skeleton frame, so Leslie labels the Tacoma the city's first curtain wall building because everything on the outside of the building (terra-cotta and glass, mainly) was hung from the wrought- and cast-iron structure. But accompanying the iron frame were thick shear walls of load-bearing masonry set perpendicular to the facades; these walls, with small openings for the corridors, were the death of the building, since the interior could not be opened up to create the larger office plans that were desired a few decades after it was built.
Finding the Tacoma and other buildings of interest mentioned in Leslie's talk (e.g., Pontiac Building, Reliance Building, Fisher Building) in his book turned out to be unnecessarily tricky. A scholarly book such as this one should have a thorough index so people not reading it cover to cover can use it as a reference. But none of the many tall buildings discussed in the book are listed in the index; instead, they are listed alphabetically beneath the name of the architect. That's fine if you know who designed the Tacoma, as we do, but not if you don't. Looking at the list of buildings in the appendix helps little in this regard, since it is ordered chronologically; if you don't know the Tacoma was completed in 1889 you'll be scanning the list for a while just to find out who designed it, to find it in the index, and to see it's in chapter five, "Glass and Light: 'Veneers' and Curtain Walls, 1889–1904." Sure, Google is made for finding out things like who designed what, but I'm of the camp that books should be worlds unto themselves; they shouldn't rely on outside aids for navigation.
The "Glass and Light" chapter is where all of the buildings listed two paragraphs above are found. The fifteen years covered in the chapter must have been an exciting time in Chicago, considering how architects produced buildings like these that were considerably glassier to what came before. Minimizing the loads of exterior walls on foundations was a driving factor, given Chicago's poor soil conditions, though other considerations pushed Loop commercial buildings toward "veneers": cheaper plate glass enabling larger windows; lightweight terra-cotta replacing brick for spandrels; and iron/steel frames allowing for bay windows that cantilevered over the property line, bonus square footage for the developers. Accompanying archival photos and Leslie's collection of contemporary postcards — the latter is reminiscent of Alvin Boyarsky's "Chicago à la Carte" and Rem Koolhaas's Delirious New York — are drawings by the author and rendered axons that peel away the layers of the facades to show the interaction of structure and skin. The images and text combine to meticulously explain how and why architects and engineers in Chicago were able to create what is arguably the most influential assemblage of modern buildings ever produced.
THOMAS LESLIE BOOK TALK: