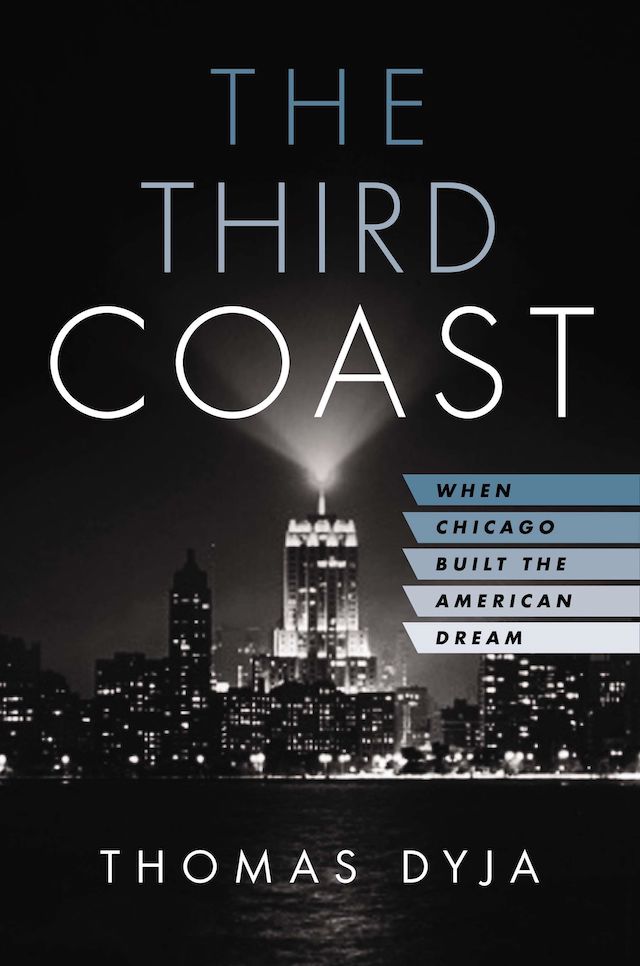 PUBLISHER'S DESCRIPTION:
Before air travel overtook trains, nearly every coast-to-coast journey included a stop in Chicago, and this flow of people and commodities made it the crucible for American culture and innovation. In luminous prose, Chicago native Thomas Dyja re-creates the story of the city in its postwar prime and explains its profound impact on modern America—from Chess Records to Playboy, McDonald’s to the University of Chicago. Populated with an incredible cast of characters, including Mahalia Jackson, Muddy Waters, Howlin’ Wolf, Chuck Berry, Sun Ra, Simone de Beauvoir, Nelson Algren, Gwendolyn Brooks, Studs Turkel, and Mayor Richard J. Daley, The Third Coast recalls the prominence of the Windy City in all its grandeur.
Thomas Dyja is the author of three novels and two works of nonfiction. A native of Chicago’s Northwest Side, he was once called “a real Chicago boy” by Studs Turkel. He now lives in New York City.
REFERRAL LINKS:

dDAB COMMENTARY:
In my review of Thomas Dyja's new book, New York, New York, New York, I mentioned that his earlier The Third Coast is one of my favorite books on Chicago. I should qualify that I have read lots of books on Chicago, having grown up in its suburbs, worked in the city for ten years after graduating architecture school, and written a guidebook on contemporary architecture in the city and suburbs. The last actually prompted me to buy The Third Coast, not really knowing what to expect but lured in by the inclusion of Ludwig Mies van der Rohe among other influential figures living and working in the city after World War II. Having read it cover to cover, unlike Dyja's newest book, which I nevertheless hope to accomplish over time, The Third Coast reminded me of another great book on Chicago: William Cronon's Nature's Metropolis: Chicago and the Great West.
Buried within a footnote about the invention of the commodity future, Thomas Dyja actually tells readers, "You'd do well to read the whole [Nature's Metropolis]." Most readers will miss this suggestion to read William Cronon's masterpiece, since, like most well-researched books aimed at a general audience, the footnotes are not numbered; they are referenced by page number and quote or line of text (thereby not distracting from reading). I point this out because the similarities between the two books are great: both give a sweeping account of Chicago's history; both extend the reach of Chicago beyond its physical footprint; and both are scholarly but also thoroughly enjoyable.
Where Cronon tells the story of Chicago in the 19th century, Dyja focuses on the mid-20th century, from WWII to 1960. His main thesis is that the city's creations in architecture, theater, fiction, music, food, art, photography, and magazines helped to shape popular culture in the United States. He takes the sole credit for this away from New York and Los Angeles, making mainly solid arguments (though some mighty thin ones) amid some great stories about Mies but also László Moholy-Nagy, Nelson Algren, Mahalia Jackson, Sun Ra, Hugh Hefner, Richard J. Daley, and others. Their stories intertwine like hands folded — unique yet connected to the city they called home.
In regards to Mies, who immigrated to the United States before the war and brought progressive design education to the United States at the Armour Institute of Technology (then IIT), the power of Dyja's book is that what stands out for me all these years after reading it is the Mecca, the Bronzeville building torn down to make way for IIT's Crown Hall. An impressive World's Fair-era building with a soaring atrium in its center, the Mecca was rough, as described by Dyja, but also a gathering spot for the Chicago Black Renaissance and home to hundreds of families displaced after the Armour Institute's purchase of the building. Town-and-gown relations haven't improved considerably around the country in the decades since (see Manhattanville), but I would hope that such a scenario now would result in, at the very least, keeping the building in an effort to maintain some link to the past and retain the embodied energy of such a large piece of construction. Whatever the case, the Mecca is an example of how Dyja's book commendably tells the stories of people and places overlooked in other histories of Chicago.
Email Post
Labels: wayback weekend