The History of Architecture 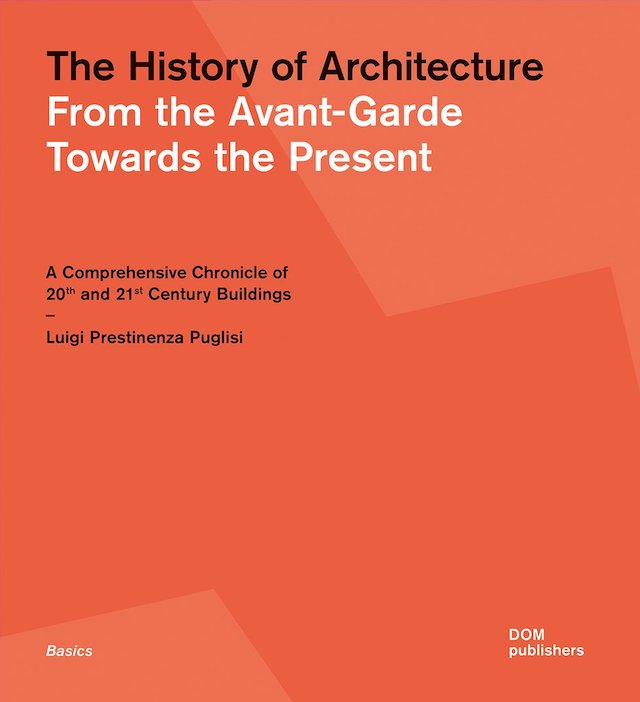 The History of Architecture: From the Avant-Garde Towards the Present
by Luigi Prestinenza Puglisi
DOM Publishers, July 2021

PUBLISHER'S DESCRIPTION:
What exactly gave rise to the phantasmagoric ­buildings of ­starchitects such as Zaha Hadid?
How did inter­actions between artists and architects affect architectural production during the twentieth century? Which exhibitions and publications have had a lasting influence over the last century?
This concise volume chronicles the move­ments and trends in architecture over the past 120 ­years. Written as a narrative but split into succinct sections, it makes for clear and compelling reading.
In his pithy and personal style, the Rome-based critic and archi­tectural historian Luigi Prestinenza Puglisi explores the events and motivations that have driven the work of leading archi­tects from Frank Lloyd Wright and Louis Kahn, to Rem Koolhaas and Kazuyo Sejima.
With over 700 illustrations and a comprehensive list of practitioners, this insightful chronicle is both visually ­appealing and easy to navigate. It covers buildings from across the globe and details projects by contem­porary archi­tects, bringing readers fully up to date.
Luigi Prestinenza Puglisi, born 1956 in Sicily, studied Architecture and subsequently specialized in Urban Planning. He taught History of Contemporary Architecture at the Sapienza University of Rome, and now teaches History of Contemporary Design at the Rome University of Fine Arts (RUFA). He is the president of the Italian Association of Architecture and Criticism.
REFERRAL LINKS:

dDAB COMMENTARY:
This ambitious book documents modern and contemporary architecture from 1905 to today, or as the subtitle indicates, "from the avant-garde towards the present." The word "towards" is telling, though, since the last chapter describes architecture during the years 2008 to 2018 in a scant nine pages, much fewer than each of the fifteen chronological chapters that precede it. The year 2008 coincides with an earlier book by Luigi Prestinenza Puglisi, New Directions in Contemporary Architecture: Evolutions and Revolutions in Building Design Since 1988, which examined two decades of architecture in 240 pages. In The History of Architecture, those same two decades are given four chapters — four chapters that don't just nearly align with the text from the earlier book, they match exactly; the text is reused here with no noticeable changes. The references and lengthy footnotes of the earlier book are gone, and the selection of images and page layout do differ dramatically, but for people like me who read Puglisi's earlier book, The History of Architecture is a three-quarters book: one that covers architecture from the turn of the century to the end of the 1980s.
As evidenced by the view of the cover, the book sports an extended subtitle (a sub-subtitle?) that reads: "A Comprehensive Chronicle of 20th and 21st Century Buildings." This wording is slightly misleading, though, because Puglisi puts as much emphasis on the architects as on their buildings. His borderline hero worship is accentuated by the Photoshopped portraits that appear sporadically throughout the book, always in the top-left corner of two-page spreads (see Herzog & de Meuron in the third spread, below). In 2021, when just about every outlet is embracing the telling of untold stories, often about women and people of color, an architecture book focused on — and literally depicting — the same-old architects of the last 100-plus years seems a bit out of touch. But how else does one tell the story of avant-garde 20th-century architecture? And for Puglisi, who comes across clearly as an arbiter of innovation in architecture and a champion of the name-brand architects who have defined architectural innovation, focusing on architects (almost) as much as their buildings is par for the course.
In at least one case Puglisi's focus on names is to the detriment of telling other stories, ones that could have added context to the stories he does present. Specifically I'm referring to a four-page portion of chapter ten ("1975-1980") titled "The Layers of the Architectural Association" (each chapter is packed with numerous sub-chapters like this, making the book easy to digest regardless of its length and scope). Puglisi focuses on Zaha Hadid, Bernard Tschumi, and Rem Koolhaas, in particular the first's competition-winning Peak project in Hong Kong and the last two's competition entries for the Parc de la Villette in Paris, which was won by Tschumi over a second-place Koolhaas. The discussion of Parc de la Villette segues into a description of (but no photo, unfortunately) an entry by Luigi Pellegrin. But this section on the Architectural Association does not even mention Alvin Boyarsky, who is almost single-handedly responsible for making the AA an appealing place for Hadid, Tschumi, Koolhaas, and other famous names all those decades ago. It seems irresponsible to not include Boyarsky in a text referring to the AA during his years as chairman, but it is excusable given the way Puglisi's writing focuses on the theory of form-making over historical context.
The History of Architecture is also available in Spanish, though unfortunately in my copy this means that twelve pages near the end of the book are in Spanish rather than English. Fortunately they are in the penultimate chapter, which overlaps with Puglisi's 2008 book mentioned above and means I'm not missing any English text. (Hopefully this issue was not widespread and other printings by DOM Publishers are all in one language.) The next and final chapter, the short one covering the years 2008 to 2018, sees the author using the Venice Architecture Biennales and Pritzker Architecture Prizes to trace architectural trends, and focusing on the iconic work of famous names though also mentioning some younger architects of note. He ends with Zaha Hadid, wondering if her untimely death in 2016 "will symbolically mark the end of one era and the dawn of another." That's for someone else to answer, but for those interested, The History of Architecture does a very good job of recapping the eras that led up to the (near) present one.
SPREADS: 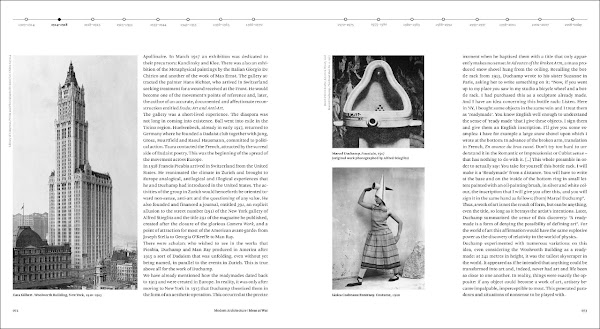 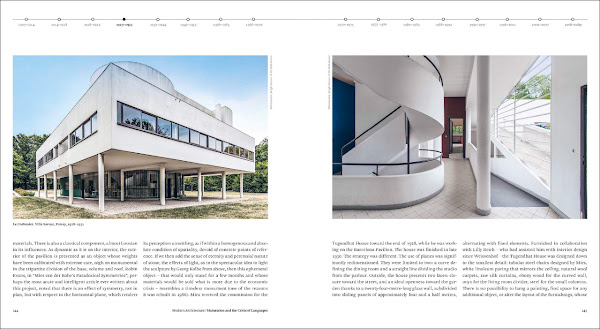 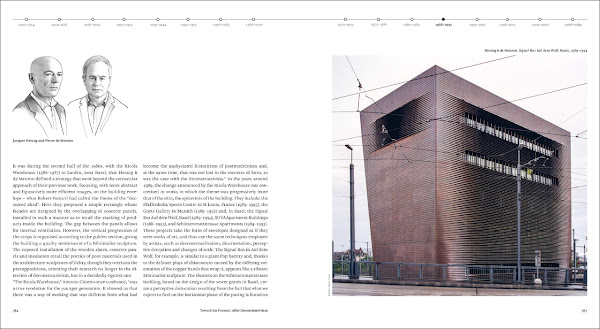 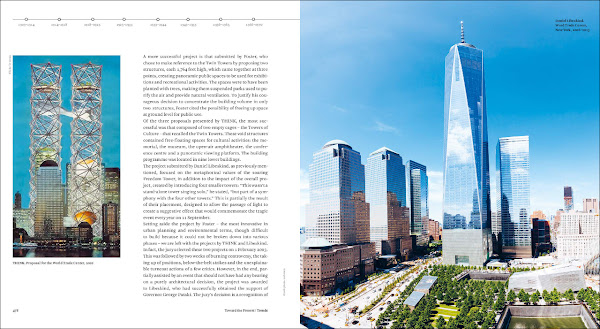