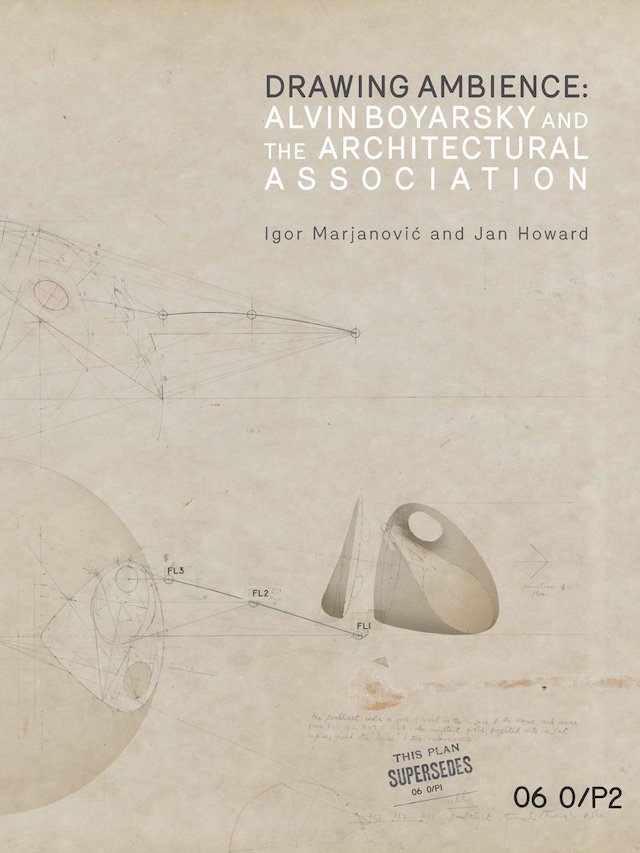 PUBLISHER'S DESCRIPTION:
This richly illustrated volume showcases the impressive collection of drawings assembled by Alvin Boyarsky during his pivotal tenure as chairman of the Architectural Association (AA) in London from 1971 until his death in 1990. As chairman, Boyarsky orchestrated an ambitious exhibition and publication program that situated drawing as not only a representational tool but as a form of architecture in its own right. This book brings together an iconic set of drawings by some of the most prominent architects and artists of our time—including Frank Gehry, Zaha Hadid, Daniel Libeskind, Mary Miss, OMA–Rem Koolhaas, Eduardo Paolozzi, Bernard Tschumi, Shin Takamatsu, and others. The combination of critical texts and close-up reproductions of prints, drawings, and the limited edition AA Folio series provides an unprecedented opportunity to explore both the techniques and the imaginative spirit of drawing practices that permeated this time of change and experimentation in architecture worldwide.
Igor Marjanovic is Associate Professor at the Sam Fox School of Design & Visual Arts at Washington University in St. Louis. He has published extensively on Alvin Boyarsky's pedagogical experiments as agents of wider architectural culture, including in Chicagoisms: The City as Catalyst for Architectural Speculation. Jan Howard is curator of prints, drawings, and photographs and curatorial chair at the RISD Museum.
REFERRAL LINKS:

dDAB COMMENTARY:
And Drawing Ambience makes three: 3 days in a row of books by or about the Architectural Association in London. Thursday was The Architectural Association in the Postwar Years by Patrick Zamarian and Friday was the 77th issue of AA Files. Digging an older AA-related book out of my library to go along with these two recently published books meant one thing: a book on Alvin Boyarsky, chairman of the AA from 1971 to his untimely death in 1990. There's The Idea of the City, the document of a 1996 symposium and tribute to Boyarsky that is most valuable for reprinting Boyarsky's pre-AA Chicago à la Carte. And there's the more recent Drawing Ambience, the catalog to a 2014/15 exhibition that started at the Kemper Art Museum, then traveled to co-organizer RISD Museum, and finally made its way to The Cooper Union. The last venue is where I was able to see in person (no photos in my archive, unfortunately) the roughly fifty drawings pulled from Boyarsky's collection.
As I mentioned in my commentary on Zamarian's book, the AA is often equated with Boyarsky since his two-decade tenure saw the London school blossom internationally, attracting notable talent that in turn educated some famous future architects; Zaha Hadid, under Rem Koolhaas, being the most notable. The projects that these and other AA-related architects produced in those years are famous in large part for their drawings: Hadid's competition-winning Peak, Bernard Tschumi's winning Parc de la Villette, and Koolhaas/OMA's runner-up entry to the same competition, to name just a few. This era of postmodernism, especially in the 1970s, is often labeled, somewhat dismissively, "paper architecture," given the glut of architectural commissions and the preference for drawings on paper. But Igor Marjanović, in his lengthy and illuminating introductory essay to the book, explains how Boyarsky saw drawings as architecture: "works of art in their own right," he wrote, "as opposed to being simply illustrations of a building." Boyarsky had fashioned an environment for the creation and display of architectural drawings, with the unit studios pushing professors and students to create visually striking work, and the school's exhibitions and publications disseminating that work to wider audiences.
Boyarsky assembled an impressive collection of original drawings and prints by professors, students, and friends in those two decades, and Drawing Ambience put them on display for museum-goers in Missouri, Rhode Island, and New York. The book is a decent, lasting surrogate for the exhibition, but as I have discovered on the occasions when I've been fortunate enough to see the paintings of Zaha Hadid in person, their size impresses. Most of the reproductions in the catalog are as large on the page as possible. They are accompanied by descriptions written by Marjanović and Jan Howard with Beau Johnson and Sarah Rovang; these texts spend little time on the architects/artists themselves, since they're so well-known, focusing instead on their links with the AA, discussing the works displayed, and providing further references. In addition to Marjanović's essay and the catalog of works, the book includes a short text by Boyarsky's son Nicholas (he's, no surprise, an architect), photos of the exhibition at the Kemper, and a list of the exhibition catalogs and other books produced at the AA during Boyarsky's tenure. The last, which were part of the exhibition, are some of the most coveted architectural publications around, with the Folios fetching hundreds of dollars each. Their rarity and appeal are one outcome of the special environment Boyarsky created at the AA, where the projects certainly became "works of art in their own right."
IMAGES: