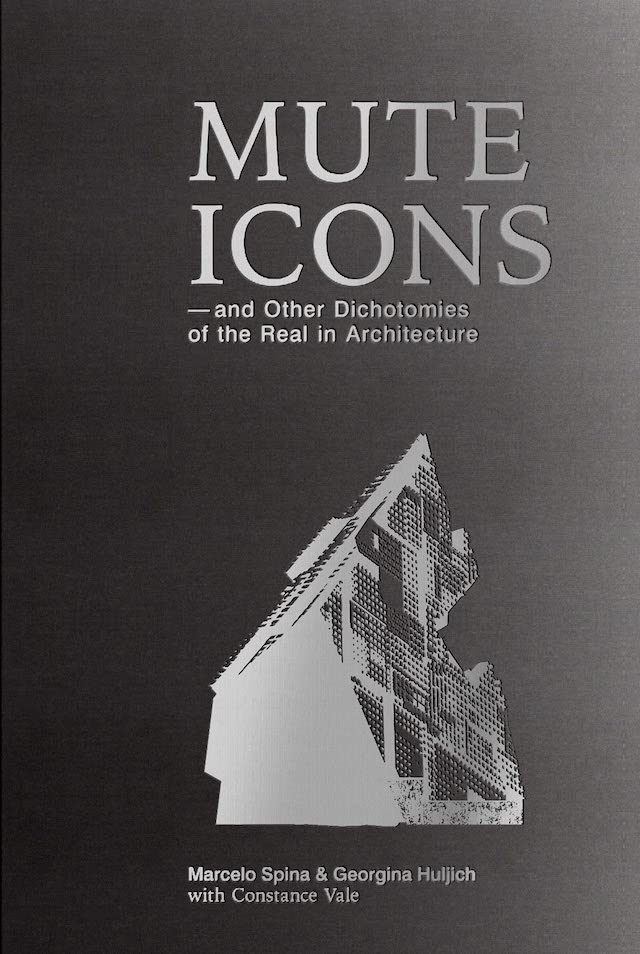 Mute Icons — and Other Dichotomies on the Real in Architecture
by Marcelo Spina and Georgina Huljich with Constance Vale
Actar Publishers, July 2021

PUBLISHER'S DESCRIPTION:
Interrogating historical, contemporary, and — more importantly— speculative images, Mute Icons & Other Dichotomies of the Real in Architecture aims to construct a viable alternative to the icon’s cliché and exhausted form of communication, positing one that is decidedly introverted and withdrawn. Developing a language and a sensibility for discovering simultaneous, contradictory, and even unexpected readings of architectural form, Marcelo Spina & Georgina Huljich / PATTERNS’s new book Mute Icons, aims to carve out a niche in contemporary culture and history by suggesting that far from being a crowd-pleaser, architecture can persist within society as a constructive cultural and social irritant.
No longer concerned with narrative excesses or with the “shock and awe” of sensation making; the mute icon becomes intriguing in its deceptive indifference towards context, perplexing in its unmitigated apathy towards the body. Object and building, absolute and unstable, anticipated and strange, manifest and withdrawn, such is the dichotomy of mute icons. Dwelling in the paradox between silence and sign and aiming to debunk a false dichotomy between critical discourse, a pursuit of formal novelty and the attainment of social ethics, Mute Icons & Other Dichotomies of the Real in Architecture’reaffirms the cultural need and socio-political relevance of the architectural image, suggesting a much-needed resolution to the present but incorrect antagonism between formal innovation, social responsibility and economic austerity. Intersecting relevant historical antecedents and polemic theoretical speculations with original design concepts and provocative representations of PATTERNS’s recent work, the book aspires to stimulate authentic speculations on the real.
Part history, part theory, and part monographic atlas, the book includes contributions by Georgina Huljich, Guillermo Martinez, Ciro Najle, Marcelo Spina, Brett Steele, and Constance Vale.
Architect and educator Marcelo Spina holds a Professional Degree from the National University of Rosario, Argentina and a Master of Architecture from Columbia University in New York. Marcelo Spina founded PATTERNS in Los Angeles in 2002 as a speculative platform to explore an increasingly global design culture. Architect and educator Georgina Huljich holds a Professional Degree from the National University of Rosario, Argentina and a Master of Architecture from UCLA, where she graduated with Distinction and was the recipient of several design awards. Georgina Huljich joined PATTERNS as a Partner in 2006.
REFERRAL LINKS:

dDAB COMMENTARY:
Although I'm not big on podcasts nor vlogs, last week I ended up watching an episode of Archimarathon, the channel of Kevin Hüi and Andrew Maynard, because of its title: "What’s The Point Of Architecture History and Precedents?" In it, Hüi and Maynard lament the deficit that students and recent graduates have in understanding "foundational" buildings and the accumulated knowledge they provide. It's a sentiment shared by, among others, Thom Mayne and Eui-Sung Yi, who wrote 100 Buildings as a means of at overcoming "a declining awareness of historical precedent" that they noticed in architectural education. The internet is partly to blame, especially when it comes to finding precedents that date beyond the last few years, but it's also an attitude: that older buildings are not relevant to today's extraordinary circumstances.
In Mute Icons, Marcelo Spina and Georgina Huljich mine precedents that span nearly 5,000 years, from Ancient Egypt to 2009, doing it in a way that renders them "familiar yet strange" and enables their analysis to be applied to the projects of their studio, PATTERNS. Put another way, in their hands historical precedents are very much relevant, something I find refreshing, and which makes this book appealing to me. The precedents comprise the first part of the three-part book, with the last part comprising a monograph of PATTERNS' projects and the second part serving as "a conceptual bridge" between the other two, directly showing how the precedents informed, or at least relate to, particular projects.
The book's title hints at their approach, in which iconic buildings that "speak clearly" are muted: rendered and analyzed in ways that turns them from familiar designs into, as the authors attest, strange entities. Many people know the Great Pyramid of Giza, Mies's Friedrichstrasse Skyscraper, and SANAA's New Museum of Contemporary Art — to cite just three examples of the nearly thirty precedents in part one, a mix of the built and the unbuilt — through images, be they photographs, renderings, or sometimes drawings. But here they are all rendered similarly as nearly scaleless, monolithic objects often devoid of context. The buildings become what the authors call "fuzzy wholes" that "challenge fixed formal and aesthetic notions of both parts and wholes" aimed at arriving at "original architectural ideas that have a point of contact with a new sensibility."
Those new ideas are explored in the next two parts, as in a spread in part two that shows the "displacements and disarticulations" of SANAA's New Museum opposite PATTERNS' own Olympia project, a residential project with some shifted floor plates. Olympia reappears in the third, monographic part of the book, first alongside twenty other projects and then interspersed between those projects in four appendices: "Hyper Obliques," "Physical Models," "Photorealistic Perspectives," and "Aerial Photomontages." The imagery of these appendices very much reflects that of the historical precedents, with the projects rendered in a way that reduces the distinction between projects but highlights their shared formal traits, followed by hyper-realistic renderings that present the projects in settings bordering on dystopian sci-fi.
Outside of some comments early in the book on various crises and recent sociopolitical movements, the book is predominantly focused on form and a questioning of the iconic in architecture. The mix of historical and contemporary, of precedents and projects, makes for a book that defies categorization. I think Spina and Huljich would be pleased with their book eliciting such confusion, as the work coming out of PATTERNS likewise breaks free from a number of conventions. If Mute Icons is a monograph, it does not clearly present projects, and it leaves out many projects found on the firm's website. And if it's a book on architectural history, that history is incomplete, biased, and clearly in the service of the present. Whatever the book is or whatever it should be called, Mute Icons certainly doesn't fail to provoke.
SPREADS: 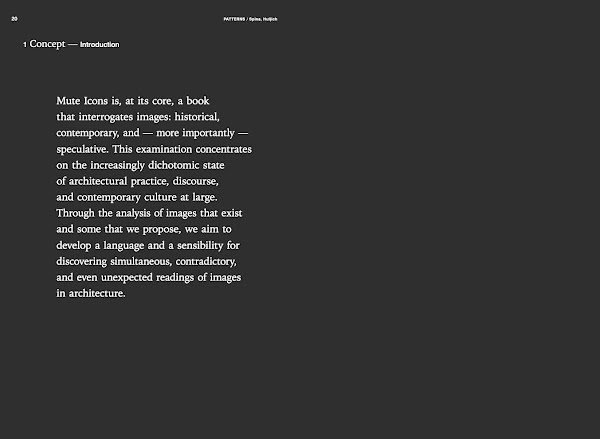 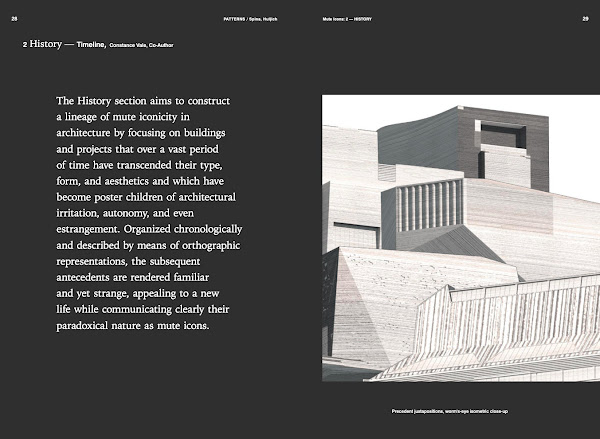 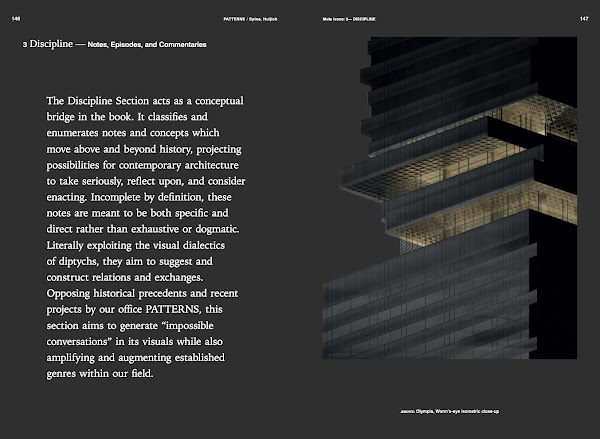 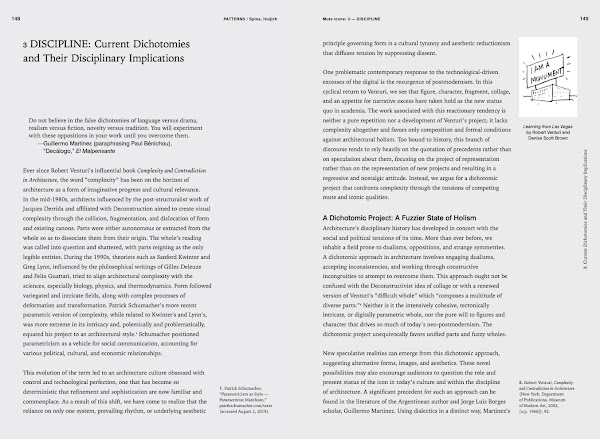 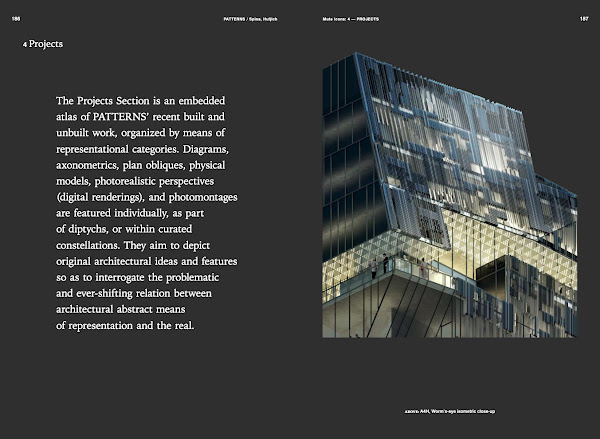