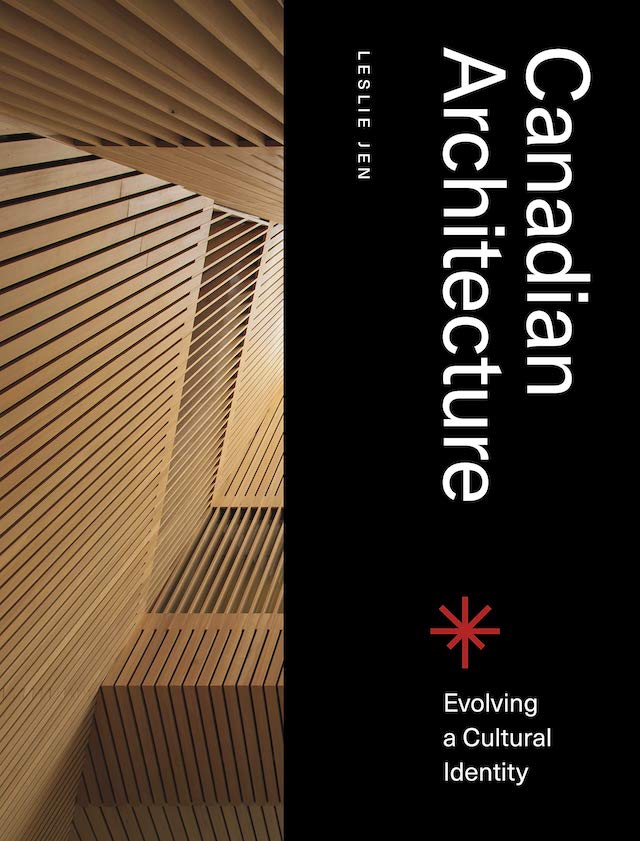 PUBLISHER'S DESCRIPTION:
Canadian Architecture: Evolving a Cultural Identity surveys the country’s most accomplished architectural firms, whose work enhances cities and landscapes across Canada’s geographically varied expanse. Author Leslie Jen explores a number of significant projects in urban and rural environments—private residences, cultural and institutional facilities, and democratic public spaces—that profoundly influence our interactions with each other and the communities in which we live. Accompanied by stunning photography, Canadian Architecture is a testament to a thriving, diverse and innovative design culture that continues to play an integral role in shaping our national identity.
Leslie Jen is an architecture and design journalist based in Toronto, where her consultancy practice includes writing, editing and curating for several design magazines, award-winning architectural firms and arts organizations. For nearly 12 years, she was the associate editor of Canadian Architect magazine, during which time she contributed significantly to the discourse of architecture and urbanism in Canada.
REFERRAL LINKS:

dDAB COMMENTARY:
Inspired by the centuries-old Prix de Rome in architecture, the Professional Prix de Rome in Architecture was established by the Canadian Council for the Arts in 1987 as an annual award given to "a young practitioner of architecture or an architectural firm that has completed their first built works and has demonstrated exceptional artistic potential." A glance at the list of 32 laureates who have received the prize reveals an interesting mix of names, some of them familiar (John Shnier, Hal Ingberg, Philip Beesley, Pierre Thibault, etc.) and many of them in recent years being given to firms (RVTR, Lateral Office, 5468796 Architecture, KANVA, Acre Architects, etc.) rather than individuals. The equivalent of an emerging-architect award, the $50,000 Professional Prix de Rome in Architecture helps give young practitioners a boost, pushing them to help reshape the Canadian built environment through their research and buildings.
The Professional Prix de Rome in Architecture is mentioned in the brief introduction to Leslie Jen's survey of 33 firms in Canadian Architecture: Evolving a Cultural Identity, where she writes that "many of the firms profiled here are past winners." I must admit that I hadn't heard of the Canadian Prix before receiving a copy of this book from Figure 1 Publishing, even though I've heard of most of the architects who received the prize — and in turn most of the architects who are included in Jen's book. The selection of the 33 practices in the book is not based on the Prix laureates (it's not stated, actually, what the selection is based on), so there are older firms and famous names that are also included, such as Diamond Schmitt Architects, KPMB Architects, Lemay, MacKay-Lyons Sweetapple Architects, Patkau Architects, Shim-Sutcliffe Architects, and Teeple Architects.
Although Canadian Architecture has a subtitle that gives an indication that the book is an exploration of an "evolving cultural identity" in architecture in Canada, like the selection of firms in the survey, it is not an explicit thing. The introduction mentions a few considerations ("Responding to growth," "Designing for health and aging," and "Meeting ecological challenges"), but the profiles that follow stick to a consistent format: a few paragraphs about the firm, including a list of awards, Prix and otherwise, and the presentation of two projects in words and images. There is no apparent attempt to link the firms and their work to the themes in the introduction or to the cultural identity of the book's subtitle. Put another way, it's up to the reader to discover any consistent strands that make the work in these pages truly Canadian or indicative of evolving trends in the 21st century.
Having written a few books myself that are firmly in the "survey" category, I know how such a book exhibit the tastes and preference of their maker. Therefore, a book that purports to describe a Canadian architecture does so at the mercy of the person making the selection and writing the descriptions — awards be damned. In the case of Jen's selection, most likely based on her expertise as an editor and journalist, one could argue about omissions (Hariri Pontarini, Provencher_Roy, Saucier + Perrotte, YH2, etc.) or projects that should have been swapped with others (the few in-progress projects stand out from the predominantly built works), but overall it's hard to quibble with Jen's selection. It is a solid collection of 66 projects by 33 architects, ultimately adding up to an expression of diversity more than anything else.
SPREADS: 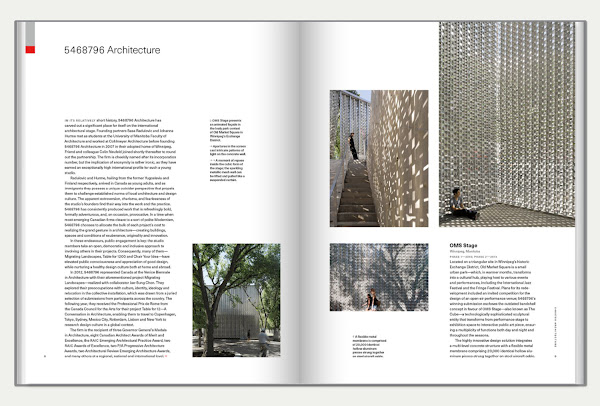 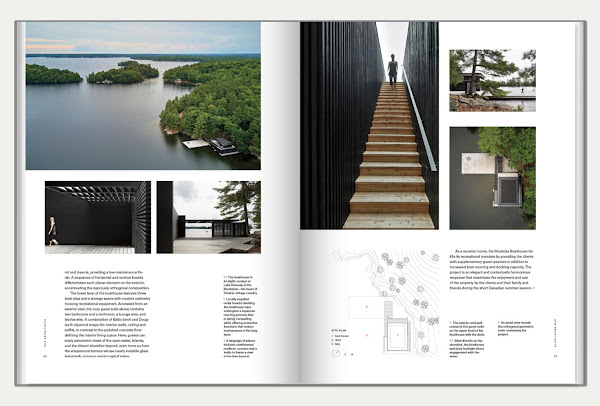 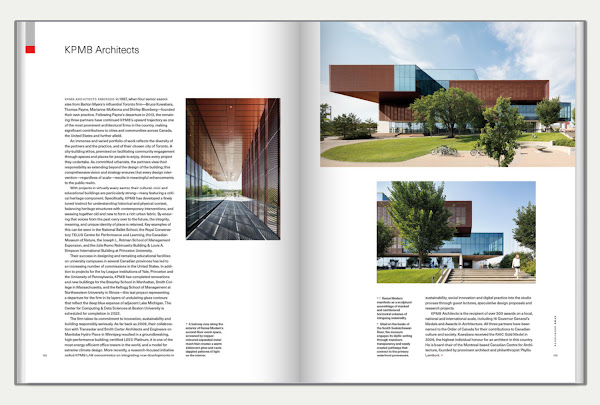 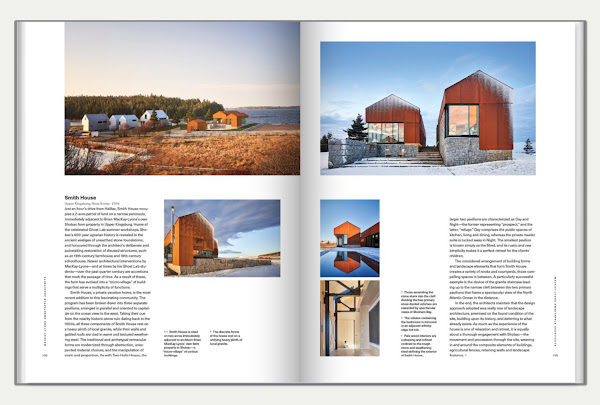