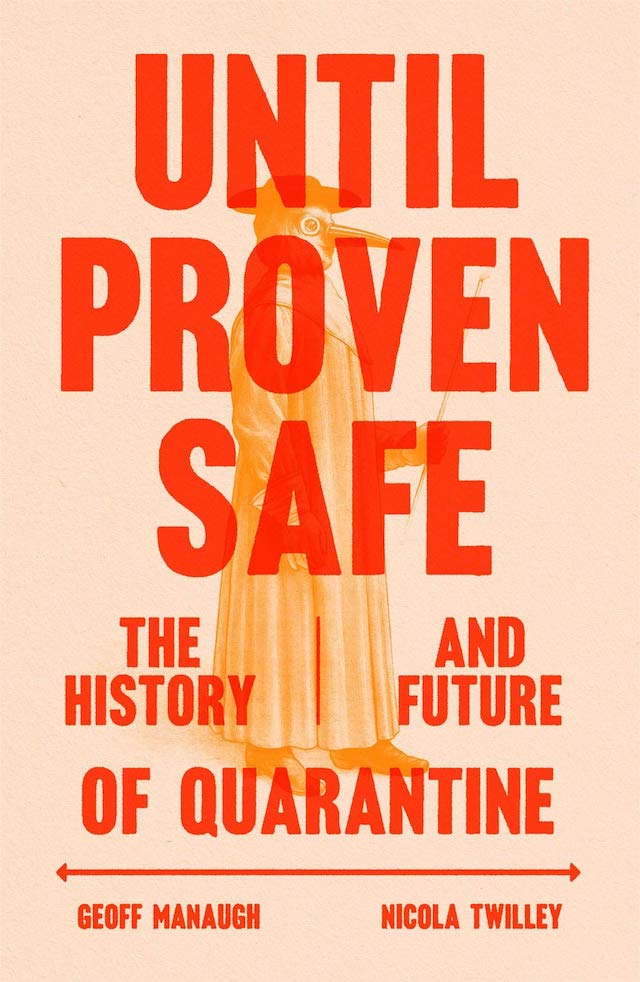 Until Proven Safe: The History and Future of Quarantine
by Geoff Manaugh and Nicola Twilley
MCD × FSG, July 2021

PUBLISHER'S DESCRIPTION:
Quarantine is our most powerful response to uncertainty: it means waiting to see if something hidden inside us will be revealed. It is also one of our most dangerous, operating through an assumption of guilt. In quarantine, we are considered infectious until proven safe.
Until Proven Safe tracks the history and future of quarantine around the globe, chasing the story of emergency isolation through time and space—from the crumbling lazarettos of the Mediterranean, built to contain the Black Death, to an experimental Ebola unit in London, and from the hallways of the CDC to closed-door simulations where pharmaceutical execs and epidemiologists prepare for the outbreak of a novel coronavirus.
But the story of quarantine ranges far beyond the history of medical isolation. In Until Proven Safe, the authors tour a nuclear-waste isolation facility beneath the New Mexican desert, see plants stricken with a disease that threatens the world’s wheat supply, and meet NASA’s Planetary Protection Officer, tasked with saving Earth from extraterrestrial infections. They also introduce us to the corporate tech giants hoping to revolutionize quarantine through surveillance and algorithmic prediction.
Geoff Manaugh and Nicola Twilley have been researching quarantine since long before the COVID-19 pandemic. With Until Proven Safe, they bring us a book as compelling as it is definitive, not only urgent reading for social-distanced times but also an up-to-the-minute investigation of the interplay of forces–––biological, political, technological––that shape our modern world. The result is part travelogue, part intellectual history, an exhaustively researched trip that could not be more urgent or timely—and a book as compelling as it is definitive.
Geoff Manaugh is the founder of BLDGBLOG, one of the most popular architecture sites on the Web. Nicola Twilley is co-host of the award-winning podcast Gastropod, which looks at food through the lens of history and science, and an award-winning contributor to The New Yorker. She lives in Los Angeles.
REFERRAL LINKS: