I've decided to bring back "Book Briefs," the series of occasional posts featuring short first-hand descriptions of some of the numerous books that publishers send to me for consideration on this blog. Obviously, these briefs are not full-blown reviews, but they are a way to share more books worthy of attention than those that end up as long reviews. This installment features six monographs published between December 2020 and January 2022. 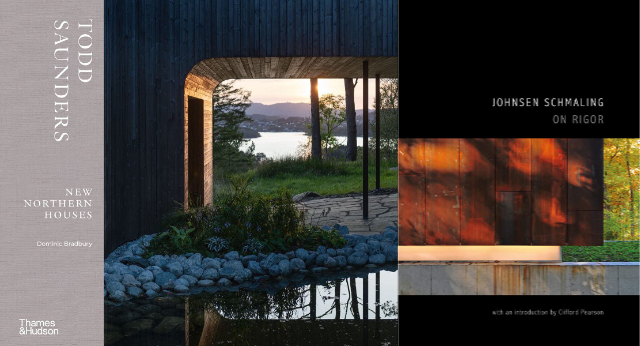 Todd Saunders: New Northern Houses by Dominic Bradbury | Thames & Hudson | November 2021 | 12 x 10-1/2 inches | 256 pages | $75 | Amazon / Bookshop
When I think of architect Todd Saunders, two places spring to mind: Fogo Island in Newfoundland and Labrador, Canada, and Norway. Saunders was raised and educated in Canada, and he has been based in Bergen, Norway, since 1996. Although the Fogo Island Inn and other smaller structures on Fogo Island are more familiar to people in the US than his Norwegian houses, one would have to search out the hard-to-find Architecture in Northern Landscapes from 2012 (updated in 2016) for a book with those projects (or watch one-hour documentary devoted to them). New Northern Houses is all about, clearly, recently completed residential projects: nine in Norway, one in British Columbia, and one in Ontario. The large page size and landscape format (very much like the monograph on Sean Godsell's houses, also published by Thames & Hudson) is used to full effect, with large color photographs and easy-to-read floor plans presented alongside the conversational text by Dominic Bradbury. Process photos in black and white are provided for each project as well in a special "Ways of Working" section that breaks up the two groupings of houses; people of all sorts will be interested in the presentations of Saunders' stunning houses in stunning settings, but architects and architecture students will be drawn to the insights into his creative process.

Johnsen Schmaling: On Rigor by Johnsen Schmaling Architects, with an introduction by Clifford Pearson | ORO Editions | December 2021 | 7 x 10 inches | 236 pages | $35 | Amazon / Bookshop
In the nearly twenty years since Brian Johnsen and Sebastian Schmaling established their eponymous architecture firm in Milwaukee the studio has produced dozens of beautiful modern buildings, most of them houses in their home state of Wisconsin. This monograph is their first, and instead of providing exhaustive coverage of their work, On Rigor presents a baker's dozen of buildings completed between 2011 and 2021, or just the latter half of the studio's two decades. Accompanying the Wisconsin cabins and houses are an art gallery in Racine, an orthodontist's office, and four projects in Sacramento, California, three of them multi-family housing. A well-considered use of materials and an emphasis on small-scale massing (even in the larger projects) unite the projects. Although the page size is more compact than the other monographs featured here, the small number of projects means more pages per building and therefore more detail in both words and images. Unfortunately, a page layout that maintains a lot of white space across roughly the top third of each page results in a lot of images that are frustratingly small. 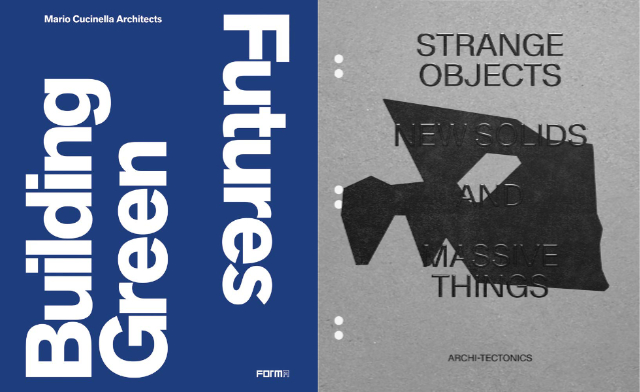 Building Green Futures: Mario Cucinella Architects edited by Anna Mainoli | Forma Edizioni | December 2020 | 9-3/4 x 12-1/4 inches | 256 pages | €65 | Amazon / Bookshop
It was in November 2018, late to the game, when I learned about architect Mario Cucinella, when he was interviewed as part of the "Past Present Future" series. The Italian architect started his eponymous practice in 1992, after working in the office of Renzo Piano for a few years; that experience is evident in the Piano-esque nature of the sketches scattered throughout Building Green Futures as well as in a clear focus on sustainability in architecture. With projects built and in-progress following Cucinella's essay on zero-energy building and an interview between the architect and botanist Stefano Mancuso titled "A Bio-inspired Future," the boo is as much manifesto as monograph. An important bridge between a manifesto on bio-based architecture and actual buildings is TECLA, a 3D-printed housing prototype in the design and testing phase in the book but since built since. The hi-tech process uses mud to dramatically reduce the carbon footprint of the buildings that were inspired by potter wasps but also recall traditional Italian trulli in their forms. The other works — considerably larger and more conventional than TECLA — are divided into four "types": Sensitive Architecture, Hybrid Architecture, Distributed Collective Intelligence, and Memory. It's clear that in Cucinella's hands a sustainable future will rely on contemporary technologies as much as vernacular techniques.
Strange Objects, New Solids and Massive Things: Archi-Tectonics by Winka Dubbeldam/Archi-Tectonics | Actar Publishers | January 2022 | 9 x 10-3/4 inches | 364 pages | $55 | Amazon / Bookshop
I can't remember the last time I've come across any books with holes. This new monograph on Archi-Tectonics, the New York firm of Winka Dubbeldam, has six of them: positioned in pairs close to the binding, the holes give the impression of a notebook or a binder full of documents rather than a polished monograph. The in-progress impression is reinforced by other design features courtesy of WeShouldDoItAll: the outside has a thick chipboard cover, exposed glued spine, and the title printed on the text blocks; inside there are three center marks to a page, images extend from one side of a page to the next, and a notational system for images feels like it is an in-house convention for Archi-Tectonics that jumped to the page. The documentation of the ten projects (in three categories: Smooth Objects, Anomalies, and Smart Skin) is aligned with the book's design, with drawings and construction photos as numerous as finished photography. My favorite section is the last, since it features three residential projects within walking distance of each other (497 GW, V33, and 512 GW) that are thoroughly documented in words and images (they're all on a walking tour of Tribeca I give). But it's the Asian Games Park, being completed now for the 2022 Asian Games taking place in September, that is the heart of the book. Documented across 50 of the book's 364 pages, the high-profile project is by far the largest for the small NYC studio — and a project that should bring Archi-Tectonics lots of international attention. 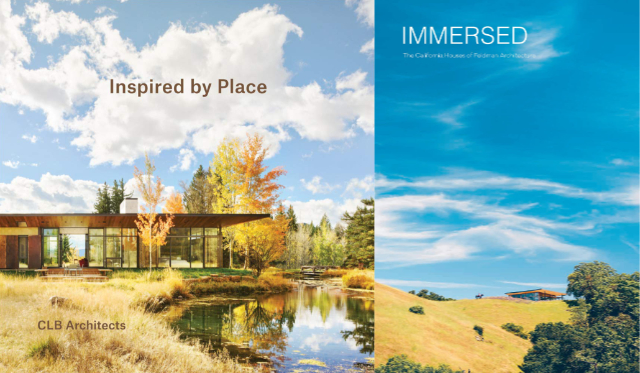 Inspired By Place by Chase Reynolds Ewald, edited by CLB Architects | ORO Editions | April 2021 | 11-1/2 x 11-1/2 inches | 448 pages | $75 | Amazon / Bookshop
This year CLB Architects turned thirty, having been founded as Carney Architects by John Carney in Jackson Hole, Wyoming, in 1992. In 2019, Carney transitioned from what had become Carney Logan Burke, what is now CLB and is headed by Eric Logan, Kevin Burke and Andy Ankeny (Carney is now at Prospect Studio). Whatever its name, the firm makes some of the best modern houses in the American West. These are houses that nestle into their sites and capably take advantage of the jaw-dropping scenery that is beautifully captured in big photographs in this large-format monograph. The eleven houses in the aptly titled Inspired by Place are primarily documented by glossy color photographs; each project has around forty pages, with all but six of those pages (text, plans, inspiration images) comprised of photos. The houses follow a foreword by critic Ian Volner, an introduction by architect Tom Kundig (he also makes some of the best modern houses in the West), and an epigraph by Agnes Bourne. But it's the photographers — mostly Matthew Millman in these pages, but also Audrey Hall, Peter and Kelley Gibeon, Paul Warchol, Aaron Kraft, and Tom Harris — who really shine, convincing everybody of CLB's impressive residential modernism.
Immersed: The California Houses of Feldman Architecture edited by Oscar Riera Ojeda | Oscar Riera Ojeda Publishers | December 2021 | 9-1/4 x 11-1/4 inches | 376 pages | $75 | Amazon / Bookshop
Sixteen houses designed by the San Francisco firm of Jonathan Feldman, Steven Stept, Tai Ikegami, and Chris Kurrle are presented in Immersed in three contextual chapters: Rural, Suburban, and Urban. Flipping through the book, it's interesting to move from remote houses that orient themselves to dramatic natural vistas to houses that deliberately form outdoor spaces on suburban lots to compact townhouses that are relatively introverted but reach up vertically to grab precious skyline views. Moving from one house to the next, it's hard to find a consistent strand or trademark in the designs; each house uniquely responds to its particular conditions remarkably well. Daniel P. Gregory, in his foreword to the monograph, calls it "Bay Region Modern 2.0," finding hints of William Wurster's "make no arbitrary decisions" and "be appropriate in what you do" in the firm's work. Likewise, Aaron Betsky, in the introduction that follows, describes the firm's houses as "domestic forms assembled with care and vision." Some of the apparent variety must be attributed to collaboration, even though only one name is on the marquee; Feldman articulates it in his interview with Vladimir Belogolovsky, which closes the book: "I don't see myself as an author. I am rather a conductor. I like that analogy. I surround myself with great musicians, so to speak." The music they make is very pleasing, indeed.
Email Post
Labels: book-briefs