Here is the next installment of "Book Briefs," the series of occasional posts featuring short first-hand descriptions of some of the numerous books that publishers send to me for consideration on this blog. Obviously, these briefs are not full-blown reviews, but they are a way to share more books worthy of attention than those that end up as long reviews. This installment features four recently published monographs in two pairs: two small ones (for architecture books) followed by two big ones. 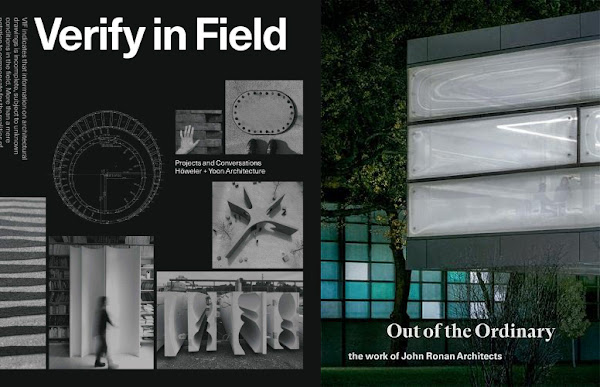 Verify in Field: Projects and Coversations Höweler Yoon by Eric Höweler and J. Meejin Yoon | Park Books | May 2022 | 7-3/4 x 9-1/4 inches | 360 pages | $50 | Amazon / Bookshop
Verify in Field, the second monograph on Boston's Höweler + Yoon, comes about a dozen years after their first book, Expanded Practice, and as the studio moves forward in its third decade of existence. In 2009, at the release of the first monograph, their most famous project was most likely White Noise / White Light, an interactive sound and light installation located in the shadow of the Acropolis during Athens's hosting of the Olympic Games in 2004. Fast forward to the present and the most well-known project by the studio of Eric Höweler and J. Meejin Yoon is a pavilion: the Memorial to Enslaved Laborers at the University of Virginia. While these two projects would appear to indicate that Höweler + Yoon have not advanced far in terms of typology and scale (they are both functionless, in the architectural sense, outdoor spaces of fairly diminutive size), but Verify in Field — or VIF, a common shorthand used on architectural drawings — indicates this is clearly not the case; if anything, it reveals that the work- and life-partners embrace a variety of project types and can tackle large-scale projects, all the while giving the wide-ranging projects equal amounts of attention to detail. 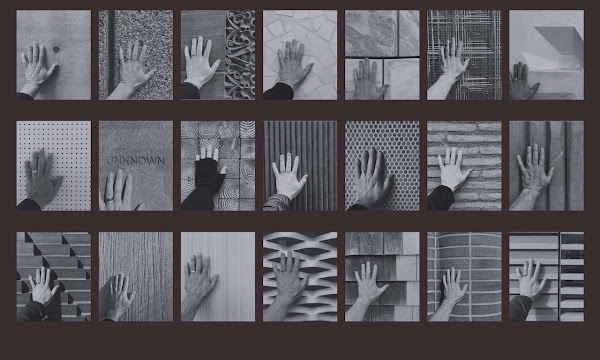 The memorial at UVA comprises the first of five thematic chapters in VIF, each of which builds upon the book's title: "What's the Matter?," "Means and Methods," "Going Public," "Under the Weather," and "...in the Details." Eighteen projects span the five chapters, ranging from memorials and cultural interiors to single-family houses and apartment buildings. A project that should gain the studio some attention when it is complete is the plaza-like Moongate Bridge under construction in Shanghai. As the book's subtitle indicates, the projects are accompanied by conversations — five of them, with fellow Bostonian Nader Tehrani, landscape architect Kate Orff, and MIT professor Ana Miljački, among them. A postscript (spread above) finds Höweler questioning the relevance of monographs in the age of Instagram. Höweler uses the app regularly to share the studio's in-progress and completed projects, though he also reviews books, documents travels to notable works of architecture, and shares projects created by his students. The answer to his question is in the "slow feed" of words and images that lead up to the postscript — a visual and intellectual feast that one can slowly digest, unlike the endless, distracting Instagram feed. (My only quibble with the book are the pages with silver text on white and gray pages, where the words are unreadable in the wrong light conditions.)
Out of the Ordinary: The Work of John Ronan Architects by John Ronan | Actar Publishers | August 2022 | 6-3/4 x 9-1/4 inches | 360 pages | $54.95 | Amazon / Bookshop
If we take the number of pages given a project's documentation as an equivalence to its importance and quality — and, really, is that so wrong? — the top three projects by the eponymous Chicago firm of John Ronan are: the Ed Kaplan Family Institute for Innovation and Tech Entrepreneurship (32 pages), the Poetry Foundation (30 pages); and Independence Library and Apartments (28 pages). None of the sixteen other projects — completed buildings among them, but also speculative projects, competition entries, unbuilt projects, and buildings under construction — come close in terms of pages, but cumulatively they paint a comprehensive and cohesive picture of a firm with many more projects to its name. The projects don't tell the whole story, though, since they are accompanied by short texts by Ronan, including one he contributed to Chicago by the Book: 101 Publications That Shaped the City and Its Image, essays by Sean Keller and Carlos Jimenez, and an interview between Ronan and fellow Chicagoan Clare Lyster. 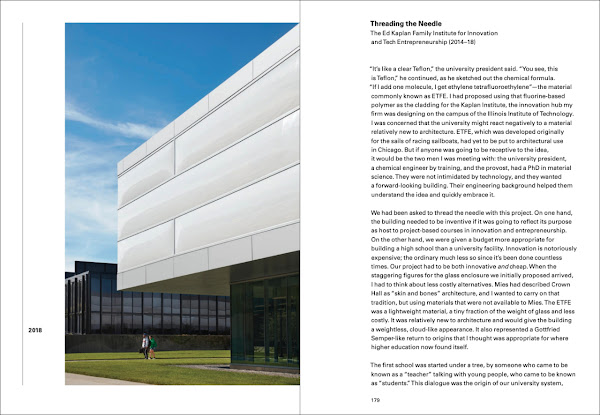 The compact book (the small size is refreshing compared to coffee-table monographs, I'll admit) moves roughly in chronological order, starting with Ronan's contribution to the Visionary Chicago Program organized by the Chicago Central Area Committee with the involvement of Stanley Tigerman in 2003: Ronan proposed turning the massive Old Post Office into a mausoleum in which funeral processions would move via barge along the Chicago River. Following it is another project that stayed on the drawing boards: Ronan's competition-winning design for Perth Amboy High School from 2004. I was living in Chicago at the time and had the impression, when the high school was shelved, that Ronan would have a hard time making the jump from drawing board to building, especially given ambitions considerably larger than the typical small projects young architects tackle. The trio of buildings mentioned above clearly indicate his firm's success, as do the numerous other Ronan buildings I put in last year's Guide to Chicago's Twenty-First-Century Architecture; Ronan's studio actually has more buildings in my book than all but one or two other architects in the city — another quantitative indicator of importance and quality. 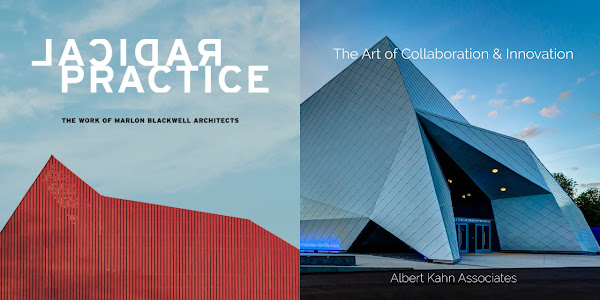 Radical Practice: The Work of Marlon Blackwell Architects edited by by Peter MacKeith and Jonathan Boelkins | Princeton Architectural Press | June 2022 | 11-1/2 x 11-1/2 inches | 512 pages | $80 | Amazon / Bookshop
What comprises a "radical" practice? Is it designing buildings that appear radical, akin to the angular red shape on the cover of this hefty monograph? Or is it veering from the norms of practice through, for instance, employee ownership, or by recommending to clients that they reconsider building a project because it might do ecological harm? One hint to the term's application to the practice of Fayetteville, Arkansas's Marlon Blackwell Architects can be found in an essay by Robert McCarter in which he references a text by Frank Lloyd Wright from 1930: "Radical, meaning 'of the roots.'" Although McCarter is writing about St. Nicholas Eastern Orthodox Church in Springdale, Arkansas, this quote points to a couple of things: Blackwell staying put in Arkansas, rather than decamping for one of the coasts or a big Midwestern city like Chicago; and his ability to create buildings that tap into the vernacular of a place but are dramatic, contemporary updates cognizant of changing societal needs. 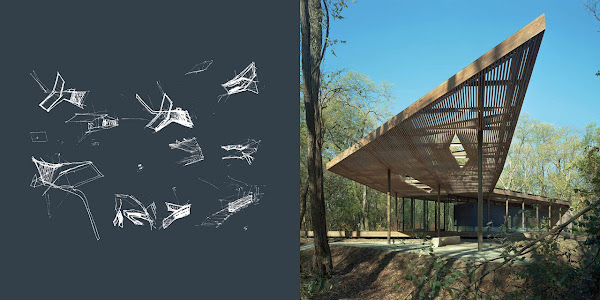 McCarter's text is one of fifteen essays that are inserted between the thirteen projects completed over roughly the last two decades. The alternating text and projects give the monograph a definite rhythm, one that is reinforced by a consistent structure for the documentation of the projects: a spread with text on a red background signaling the radical nature of the project (e.g., "Radical Site" for the Ruth Lilly Visitors Pavilion, the project pictured above); two pages of inspiration, mostly of nature, vernacular buildings, and notable buildings photographed by Blackwell; followed by the usual descriptive text, drawings, and photographs — lots of photographs. Most monographs are marketing, and Radical Practice is no different. But the solid list of contributors offering up some praise (among them are James Corner, Brian McKay-Lyons, Guy Nordenson, and John Ronan), as well as the insertion of photographs of the rural South by Tim Hursley between the projects and essays, among other pieces, make this book very hard to resist for fans of Blackwell's buildings.
The Art of Collaboration & Innovation: Albert Kahn Associates | Visual Profile Books | June 2022 | 10-1/4 x 10-1/4 inches | 300 pages | $60 | Amazon / Bookshop
The blurb for this monograph on Albert Kahn Associates boasts that the famous Detroit firm has been responsible for around 45,000 projects in more than 125 years. Like many architects, I learned about Kahn in the context of automobile factories and other industrial structures in the first decades of the 20th century, so I was surprised to learn that A) Kahn's eponymous firm still exists eighty years after his death in 1942, and B) the firm is responsible for a wide range of building types beyond automotive and industrial, and the buildings are designed in a variety of styles, not just the functional modernism Kahn pioneered. The legacy of the firm was established by Kahn's projects for Ford, General Motors, Packard, and other carmakers over a century ago, but the cover photograph (the Polk Penguin Conservation Center, 2016) hints at the distinctly different character of the contemporary buildings designed by the firm. 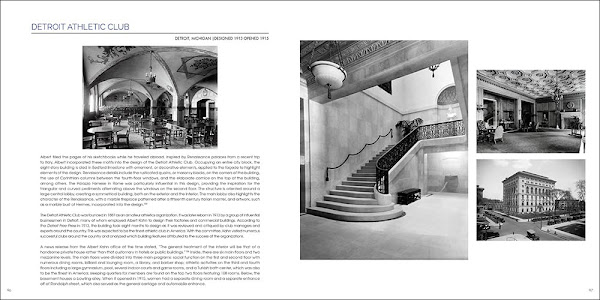 A smattering of the firm's thousands of projects are presented in the large-format book. Instead of a strict chronological presentation, the roughly hundred buildings are organized in three chapters: "The Legacy," "The Art of Architecture," and "The Art of Engineering"; a fourth chapter, "The Future," illustrates some of the firm's concerns with relevant renderings. Inserted sporadically among the projects, especially in the first chapter, are short texts that highlight some of the qualities Kahn's firm was and is known for; they combine with the short project presentations (most are two or four pages) to provide a historical portrait of the firm. Even with the firm's longevity, the book is most valuable for bringing together the many seminal Kahn projects from the early 1900s alongside some lesser-known buildings the firm completed before Kahn's death. Most of the buildings — old and recent — are found in and around Detroit (the firm's interactive map makes finding them a great distraction); as such, The Art of Collaboration & Innovation makes a good companion to Michigan Modern: An Architectural Legacy, also published by Visual Profile Books, back in 2018.
Email Post
Labels: book-briefs