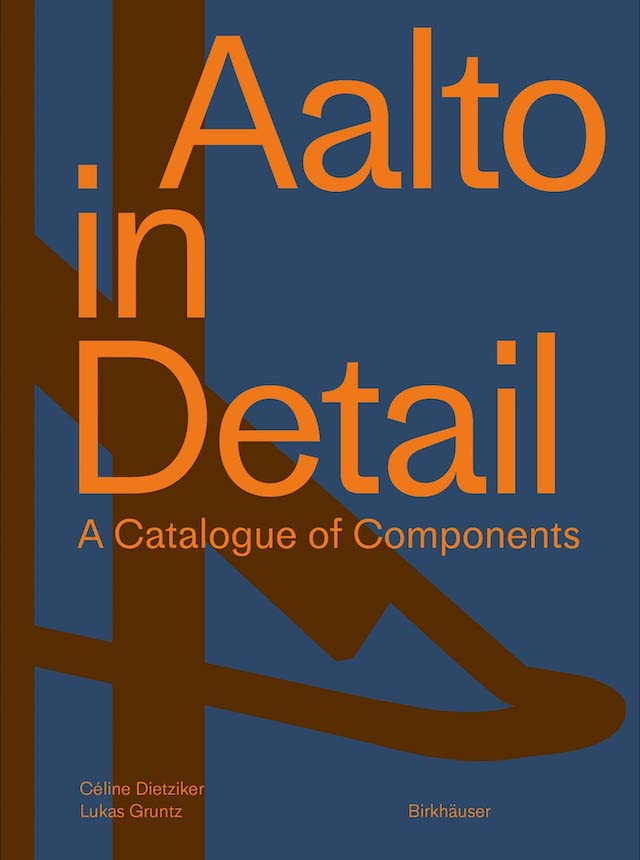 Aalto in Detail: A Catalogue of Components
by Céline Dietzkier and Lukas Gruntz
Birkhäuser, July 2022

PUBLISHER'S DESCRIPTION:
This carefully curated catalog celebrates the rich detail in the work of Aino, Elissa, and Alvar Aalto. Every support, railing, and handle is the result of intensive formal and functional research. The authors document 50 Aalto buildings – some well-known and others less so – and arrange their photographs by component into 20 chapters. The result is a rich photographic record that will serve as a source of inspiration for every architect.
REFERRAL LINKS:

REVIEW:
Having yet to visit Finland, and having spent my one day in Cambridge, Massachusetts, on the campus of Harvard rather than MIT, I've yet to see an Alvar Aalto building in person. The Baker House dormitory at MIT is the easiest way for someone like myself living on the East Coast to see an Aalto in person, but I have it on good judgment that it would pale in comparison to visiting Villa Mairea, Säynätsalo Town Hall, Paimio Sanatorium, and any of the many other Aalto buildings in Finland. This is hardly a debatable statement, given Aalto's lasting popularity with architects, the fact many of his masterpieces are open to the public, and that in Finland whole tours are geared to his buildings. Nevertheless, this statement came to mind as I flipped through the 400 photos in Céline Dietzkier and Lukas Gruntz's compilation of details in Aalto buildings. Baker House is not in the book, but nearly 50 Aalto buildings, "from Helsinki, to Jyväskylä, to Turku," are — all carefully documented in color photos and catalogued in 19 chapters. 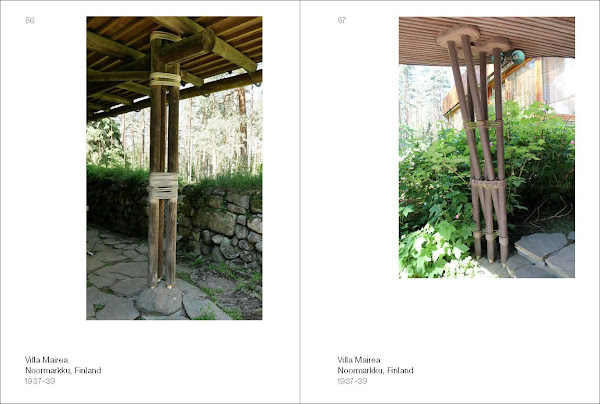 According to Dietzkier and Gruntz, partners at Atelier Atlas Architektur in Basel, their "photographic collection [...] demonstrates our love of details" and "serves as inspiration for our own architectural work." Although their "catalogue of components" is presented simply as one photograph per page accompanied by the most basic of information (project name, location, dates), the couple is clear to point out that Aalto did not work alone. In other words, Aalto's buildings were actually the Aaltos' buildings, designed with his first wife, Aino, who died in 1949, and then Elissa, whom he married a few years later. A brief, one-sentence attribution to this effect in the authors' two-page introduction is fleshed out in Annette Helle's untitled essay that follows: "[Aalto] ran his office as a partnership with Aino Aalto from 1924 to 1949, and then with Elissa Aalto from 1952 onward," but "it is astonishing that, to this day, the achievements of his partners have not been better researched and appropriately recognized." Kudos, though apparently readers have to keep these dates in their head, as the information accompanying the photographs does not also include the names of the collaborators. 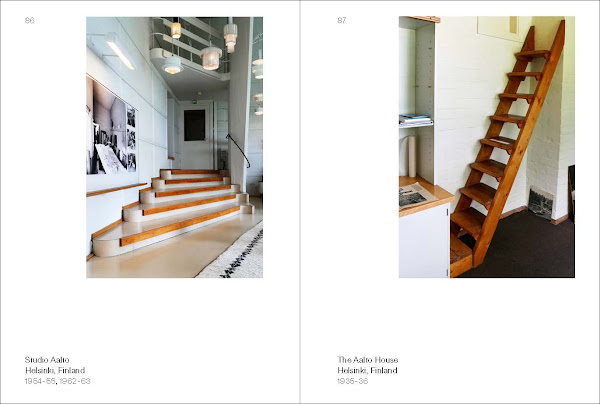 As the spreads here make clear, Aalto in Detail is a straightforward picture book: 400 photographs on 400 pages in 19 chapters, each chapter a "component." The book starts, appropriately, with Porches and ends, less obviously so, with Exterior Lamps. In between are Pillars, Stairs, Skylights, Door Handles, Fireplaces, and even Garage Doors and Socle, among others. Rather than being presented in chronological, geographical, or some other logical order, they are presented as pairs; the two photos on a spread have similarities to each other, be it in architectural detail, photographic composition, or some other trait. This approach is not uncalled-for (Nicolas Grospierre's "Subjective Atlas" books come to mind), but here it is not only apt, it works really well, accentuating the consistent methods the Aaltos used from project to project and occasionally showcasing the repetition of bespoke details. The spreads here show, for instance, how the Aaltos like to wrap things: the slender columns at Villa Mairea are tied together with ropes (above), while metal door handles (below) are wrapped in metal so they are more agreeable in temperature and texture to human hands. 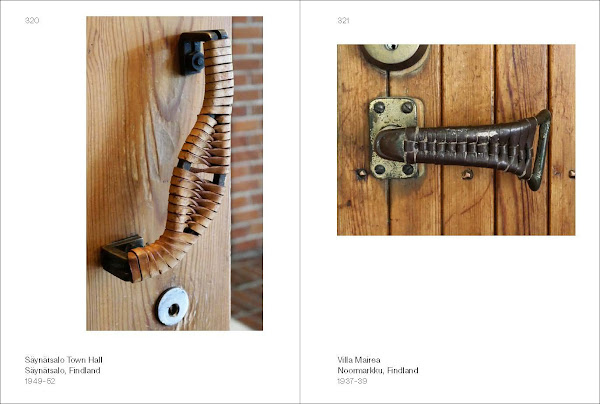 Not having been to any of the nearly fifty buildings in the book, I can only guess that my eyes would be trained on many of the details captured by the authors — even without their book as a guide to do so. Such is the attention to detail in the Aaltos buildings, where components were handcrafted, not mass-produced, and so please in their articulation. They were not alone in that approach, but they were masters of it at a time when many architects veered to the mass-produced. The presentation of Dietzkier and Gruntz's photos through similarities means the Aaltos' approach comes across a bit like threads running through the various buildings; each project had a particular solution but all were bound together through how they detailed the components. I was surprised to see the application of flat panels on round pillars at the Administration Building for the City Electric Co. (Helsinki, 1965–1976) echoed two pages later in the columns of the Library in Seinäjoki (1960–65). Repetitions like these are in abundance, resulting in a greater appreciation of the Aaltos' buildings — one can't invent the wheel every day, after all — and a stronger desire to see them in person. 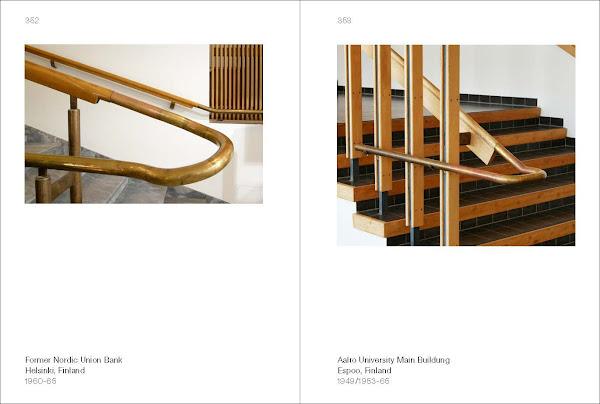 Aalto in Detail acts a bit like a guidebook, and while I didn't expect there to be maps or other information akin to architectural guides (there aren't any), I was pleased to find an index of the nearly fifty buildings, organized by location and project. So people visiting Kauttua, for example, can see a list of the three buildings located there (Lohiluoma Residential Building, Sauna and Laundry, Terrace Housing) and the pages on which their components are presented. This index takes up just two pages, but it reminds me that far too many other books I've encountered have opted, for one reason or another, to not include similarly helpful indices, making their books less user-friendly. The index here echoes the care and attention that Dietzkier and Gruntz put into their documentation of the Aaltos' buildings, as well as their love of those buildings — a love their book imparts onto others.
FOR FURTHER READING:
Email Post
Labels: birkhauser