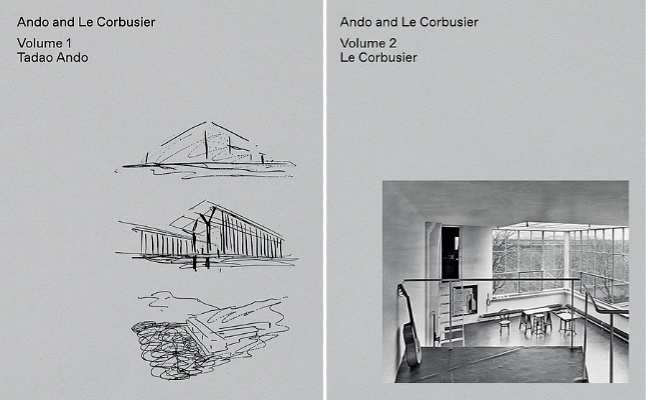 Ando and Le Corbusier is a two-volume project that shows how the works of two pioneers of modern architecture – Le Corbusier and Tadao Ando – connect human experience to the basic givens of existence: interactions among human beings and personal encounters with nature, including wind and natural light, within a spare material framework shaped by once-new technologies such as reinforced concrete – expressed in two different and remarkable approaches to architecture.
Ando and Le Corbusier, Volume 1: Tadao Ando provides a historical overview of Ando’s work for major art institutions in the United States after 2000. It includes a detailed account of his US buildings by Michael Conforti, Director Emeritus of the Clark Institute of Art, Williamstown, Massachusetts, an Ando project; “The Cult of Fudo in the Architecture of Tadao Ando,” a new essay by Kenneth Frampton on Ando’s critical regionalist response to climatic and cultural issues; and a comprehensive description of Ando’s “Art of Construction” at the new Wrightwood 659 Gallery in Chicago, by Daniel J. Whittaker, PhD. It also presents the more than 160 drawings and photographs of Ando’s work that were exhibited there in 2018.
Edited by Michael Conforti | Alphawood Foundation | 2022 | Hardcover | 9-3/4 x 11-3/4 inches | 164 pages | 160+ illustrations | English | ISBN: 9780578767048 | $55.00
Ando and Le Corbusier, Volume 2: Le Corbusier was organized to show the affinities of Le Corbusier’s work to that of Ando, who found the Paris-based, French-Swiss architect an inspiring figure as a young architect and boxer in Osaka in the 1960s. It includes nearly 300 photographs of material from the Fondation Le Corbusier and the Art Institute of Chicago included in the 2018 Wrightwood 659 exhibition, and offers new commissioned essays from eminent Le Corbusier scholars. It also has a new translation of Ando’s essay “Le Corbusier and His Houses,” with photos of more than 100 models of Le Corbusier houses made by Ando’s students in Tokyo, 2001, with Ando's commentary included in English for the first time.
Edited by Eric Mumford | Alphawood Foundation | 2022 | Hardcover | 9-3/4 x 11-3/4 inches | 224 pages | 300+ illustrations | English | ISBN: 9780578921129 | $55.00
(BOTH BOOKS CAN BE PURCHASED ON THE WRIGHTWOOD 659 WEBSITE.)
REVIEW:
Japanese architect Tadao Ando's first project in the United States was completed in 1992, the year after he received a monographic exhibition at the Museum of Modern Art in New York. Not a building, that US project was just a room in a museum: Gallery 109 at the Art Institute of Chicago. Now familiarly known as the Ando Gallery, it features a grid of 16 freestanding columns in the center and illuminated cases at the perimeter for Japanese screens and other artworks. Having grown up in suburban Chicago and been in architecture school in Kansas at the time, I visited the room on trips back home, seeing it fairly regularly after moving back to Chicago in 1997. That year, Ando completed his second Chicago commission, a house on Wrightwood in Lincoln Park for Fred Eychaner and his then partner Ken Lee. Friends of mine lived a few blocks away on Wrightwood, so I would often walk by the solid front elevation and try to peer at the introverted house from the alley; I never got inside but appreciated the smooth concrete Ando was known for. I had no idea at the time, but Eychaner also owned the neighboring buildings as a means of controlling any negative impacts on the house. Eventually he turned the apartment building on the east into the Wrightwood 659 gallery, hiring Ando once again for the project. Wrightwood 659 opened in 2018 — 27 years after the MoMA exhibition and 21 after the house's completion — with the exhibition Ando and Le Corbusier: Masters of Architecture; the two-volume catalog for the exhibition was released earlier this year. 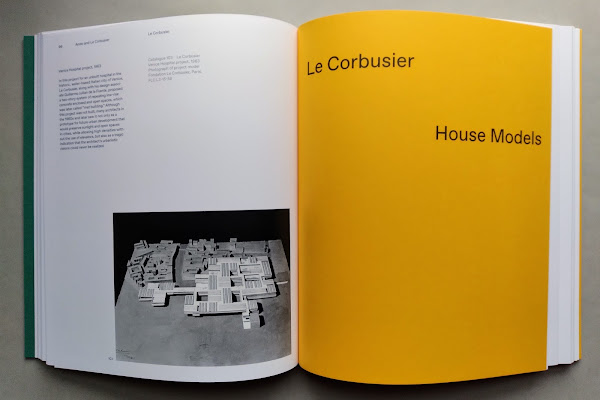 The inaugural exhibition occupied all three gallery floors of Wrightwood 659, presenting hundreds of drawings and models on the architecture of Ando and Le Corbusier, and also featuring more than 100 models of Corbusier's houses built by students of Ando (below spread). The two-part exhibition had two curators: Eric Mumford did the Corbu component and Daniel J. Whittaker took care of the Ando component. For the catalogs, Mumford edited Volume 2: Le Corbsuier, while Michael Conforti, the former director of the Clark Art Institute, edited Volume 1: Tadao Ando, whose contributions include one by Whittaker on the construction of Wrightwood 659. I did not see the exhibition during its three months at Wrightwood 659 (I've yet to see the gallery in person, afraid to say), but given the lag between the exhibition and the two-volume catalog, the latter has the benefit of featuring installations shots (bottom spread), something usually missing from exhibition catalogs. Not having seen the exhibition, I'm not sure how the relationship between Ando and Corbusier was articulated spatially, if at all, though if the book is any indication, the influence of Corbusier on Ando is of utmost importance. As such, the first volume on Ando is more valuable and appealing, in my mind, than the second volume on Corbusier. 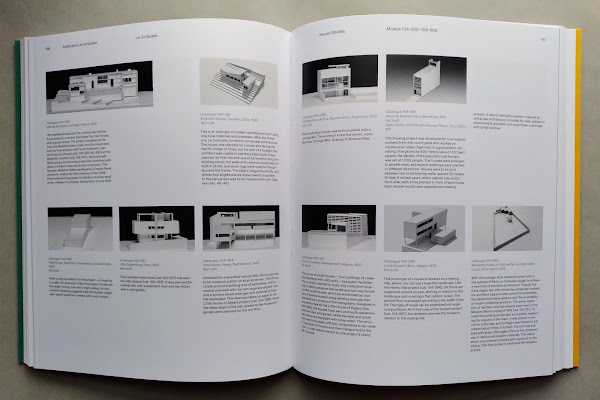 Volume 1 consists of a catalog of works in the Ando section of the exhibition prefaced by three contributions: a lengthy overview of Ando's public projects in the US by Conforti, Whittaker's essay on the construction of Wrightwood 659, and an essay by Kenneth Frampton, who gave a keynote lecture at a 2018 symposium held in concert with the exhibition (that symposium provided the papers for the more scholarly second volume). Frampton's essay is a good overview of Ando's early work, while Whittaker's essay takes a deep dive into a project that looks like it is simply a new concrete frame inserted into an old brick building, but is "far from elementary." Conforti provides numerous insights into Wrightwood 659, the Pulitzer Foundation for the Arts in St. Louis, the Modern Art Museum of Fort Worth, and (obviously, since it was created on his watch) the Clark Art Institute in Williamstown, Massachusetts. The presentation of works is solid, as is the selection of projects spanning decades, but people with monographs on Ando will only find a few unique items here, including the installation photos mentioned above as well as two gatefolds that allow for the display of lengthy presentations of Ando's sketches and drawings. Most valuable is Conforti's well-researched text. 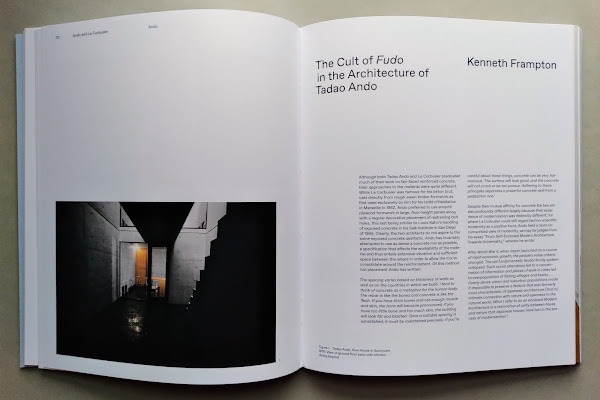 Volume 2, edited by Mumford, consists of works by Le Corbusier presented in three parts (Purism, After Purism, and Houses), followed by a section with essays by a bevy of contributors: Tim Benton, Maristella Casciato, Sheila Crane, Seng Kuan, Caroline Maniaque, Mary McLeod, and Michelangelo Sabatino. The most obvious place to find Corbusier's influence on Ando would be in the second section, After Purism, which documents the buildings in concrete that Ando would have seen on his early travels as a self-trained architect and read about in the Oeuvre Complete. But the standout is the third section, which presents a little over 100 of Corbusier's built and unbuilt houses in model form; the photographs of the models built by Ando's students are introduced by a text by Ando and accompanied by project descriptions from the Fondation Le Corbusier. A photograph of the models at Wrightwood 659 shows them sitting above a waist-high wall that was rectangular in plan yet allowed visitors inside to see the model "backs" as well as their "fronts," unlike the single views only afforded in the book. The essays that comprise nearly half the book see the authors finding niches to add scholarship on the 20th-century architect studied more than any other, with Sabatino looking at Corbusier's visit to Chicago in the 1935, for instance, and McLeod focusing on the architect's later visit to Columbia University in 1961. 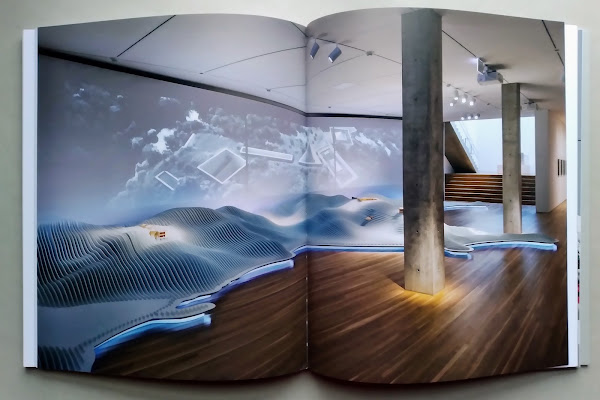 Physically the two books are beautiful objects, starting with the thick chipboard covers that are strongly aligned with the concrete surfaces of Ando's architecture (they stop short of using the dimples of the dark-gray cover for Seven Interviews with Tadao Ando). The colored cardstock used for the endpapers and dividers between section works well, as does the paper selection, the photographic reproductions, and the choice of fonts (Studio Blue is credited for design and production). Coming from Eychaner's Alphawood Foundation, I'm not surprised by the high quality; their two books on Louis Sullivan — one of which accompanied an exhibition, Reconstructing the Garrick: Adler & Sullivan’s Lost Masterpiece, at Wrightwood 659 — are amazing, justifiably award-winning books. The pair of books on Ando and Le Corbusier make me look forward to what Alphawood exhibits and publishes in the realm of architecture in the future — and to finally seeing (one of these days!) Wrightwood 659 in person.
FOR FURTHER READING:
Email Post
Labels: alphawood