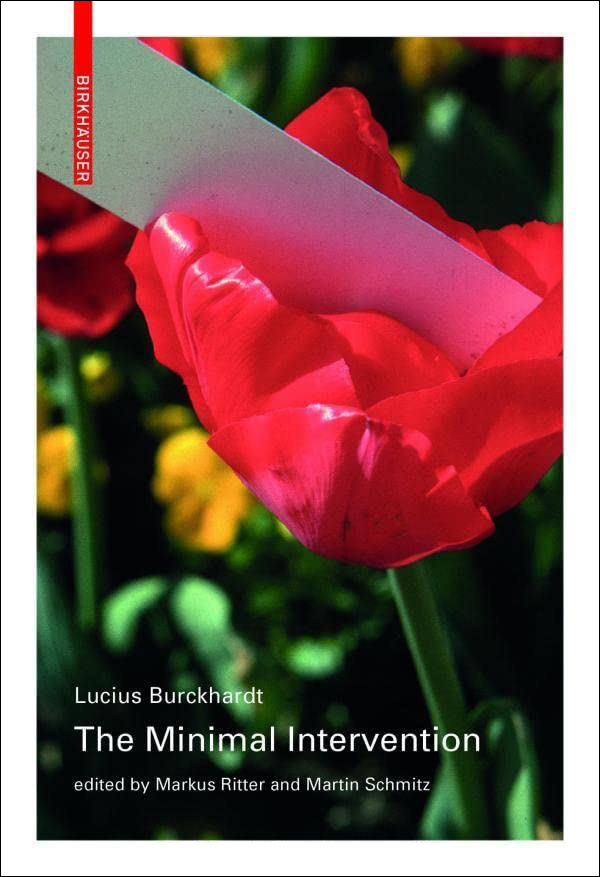 PUBLISHER'S DESCRIPTION:
Lucius Burckhardt (1925–2003) outlined his theory of the “smallest possible intervention” back in the early 1980s. The idea of minimal intervention runs through his entire oeuvre, from his critique of urbanism to the science of walking. The “smallest possible intervention” denotes a planning theory that assumes two “views” within landscape design: that which is actually visible and that in our mind’s eye. The theory of the minimal intervention means not interfering excessively with the existing landscape, but instead working with the landscape in our minds to develop an aesthetic understanding of the environment. In this book, available for the first time in English, the Swiss sociologist applies this formula to many areas of design.
REFERRAL LINKS:

REVIEW:
Although I can't recall when I learned about Swiss sociologist Lucius Burckhardt, I can pinpoint the first time I read some of some of his texts to the anthology Relational Theories of Urban Form, released last year and reviewed by me last summer. The excerpted texts by Burckhardt in that book focus on "the science of walking," or what he coined "strollology" — a great term that this walker and architectural tour guide has a hard time resisting. Simply put, "strollology examines the sequences in which a person perceives their surroundings," predicated on the fact that every destination is reached by a route, sometimes on foot; we don't just end up in a place via parachute or, in contemporary terms, via Google Street View. That so-called science informed the late sociologist's view of landscapes, buildings, and urban planning, with a strong preference for visual legibility and doing more with less, evident in such assertions as "design is invisible" and "the minimal intervention," the latter being the English translation of a text written by Burckhardt in Italian around 1980, L'Intervento Minimo (it was translated into German in full in 2013 before it was translated into English).
The cover, a photograph from the slide archive of Annemarie and Lucius Burckhardt at the University Library Basel (ditto Joseph Beuys, below), hints at the idea of minimal intervention: landscape architect Bernard Lassus would experiment on the altering of perception by placing a strip of white paper within the bloom of a tulip. "Pink-tinted Air" was his expression for the coloring of the paper, which roughly echoes quotes like Louis Kahn's "the sun never knew how great it was until it hit the side of a building" and such buildings as those designed by Luis Barragan, where light reflects off of painted walls to greatly affect spaces.
In The Minimal Intervention, Burckhardt sets his sights on planners and the construction industry rather than architects. Burckhardt clearly was not a believer in the merits of highway ring roads, clearing neighborhoods in the name of urban renewal, and the need for elected officials to focus on creating new large-scale building projects rather than the improving the existing building stock. I found myself nodding along with many assertions in Burckhardt's brisk and readable text, which starts in the realm of planning but touches on many aspects of the designed environment — from the design of kitchen appliances to landscape gardening and townscape preservation — across its 150 pages.
Near the end of the book, Burckhardt states that "the social mechanisms in decision-making tend to culminate in buildings, [even] in cases where softer strategies would be more effective." Rather than always opting for building, the sociologist argued for a theory where "every issue should be mitigated strategically, by means of intervening in it as little as possible, for this alone serves to minimize the unexpected and harmful consequences." This austere take on planning and design brings to mind the most famous sympathetic instance in recent decades: Anne Lacaton and Jean-Philippe Vassal's project for Place Léon Aucoc in Bordeaux in 1996. The duo found that "the square is already beautiful," so they "proposed doing nothing apart from some simple and rapid maintenance works [...] of a kind to improve use of the square and to satisfy the locals." Referred to often in articles on their Pritzker Architecture Prize in 2021, the landscape was an early expression of an idea that would extend to their more famous and eye-catching transformations of unloved social housing blocks in French cities; I wouldn't be surprised if Burckhardt played a part in Lacaton and Vassal theorizing their minimal approach.
Burckhardt uses a number of arguments for an approach to planning that is minimal, but none is more apropos now than the environmental benefits of reusing and transforming rather than demolishing and building anew. Just as every project site for a landscape is already a landscape of some sort, most building parcels already have buildings on them. In places like New York, where zoning is more important than planning, arguments for building bigger and taller contend that existing buildings are too small for their sites because they do not max out the allowable floor area ratio, or FAR. A zoning-focused mindset like this strives for ways to achieve and even exceed a site's FAR through various measures, very few of which consist of retaining old buildings for anything other than their foundations or as bases of taller towers. A minimal-intervention approach à la Burckhardt would set aside profit- or government-driven building projects in favor of renovations that takes advantage of embodied energy and carbon in existing buildings and the reduction of carbon- and energy-intensive construction. If "minimiz[ing] unexpected and harmful consequences" is the goal, reuse should always take priority over new construction.
FOR FURTHER READING:
Email Post
Labels: birkhauser