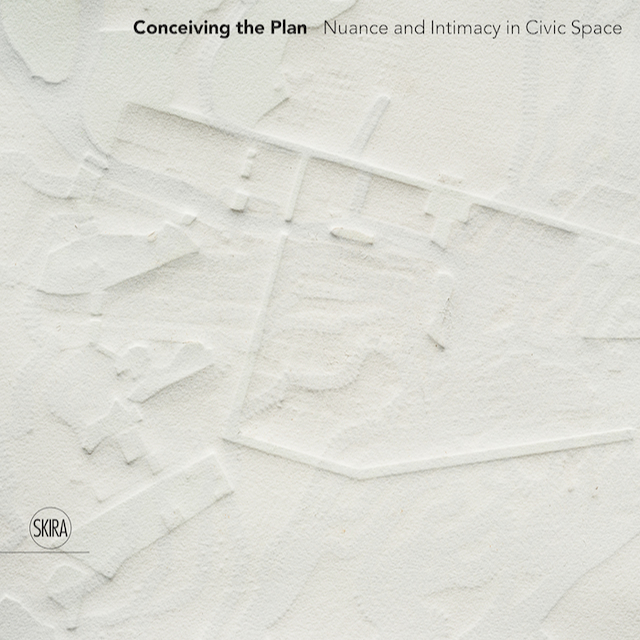 PUBLISHER'S DESCRIPTION:
In Honor of Diane Lewis (1951–2017)
How are civic spaces imbued with nuance, and in what ways does such a quality persist in the city? Can one discuss intimacy in architectural terms? Across a series of speculative projects for civic space—first exhibited as part of the 17th Venice Architecture Biennale, in the Italian Pavilion—Conceiving the Plan engages these questions in dialogue with the legacy of the late architect and longtime Cooper Union Professor Diane Lewis. For Lewis the city was not only the result of a great number of historical, and ultimately inextricable, strata of form and memory; it was also greater than the sum of its individual architectures and a mental universe all its own.
Lewis’s unique presence—her unmistakable voice—is among the most characteristic distillations of the architectural “message” of The Cooper Union from the 1970s to the mid-2010s. In this book, architectural historians Barry Bergdoll and Daniel Sherer contextualize the themes and approach of her pedagogy.
Projects by a range of international designers touch on literary, ecological, social, and metahistorical questions, provoking new spatial civic identities as well as critical approaches to the discipline and education of architecture.
Yael Hameiri Sainsaux is an architect and an educator. Her architectural practice and literary investigations have informed her teaching in New York and Europe, since 2011. Her work has been exhibited in several galleries in NYC and at The Herzliya Museum of Contemporary Art (Israel), among others.
REFERRAL LINKS:

REVIEW:
This book is the companion to an exhibition also called Conceiving the Plan: Nuance and Intimacy in Civic Space, first displayed as part of the Italian Pavilion at the 2021 Venice Architecture Biennale and then earlier this year at Cooper Union, where Diane Lewis was tenure professor from 1993 to her death in 2017. I did not travel to Venice for the pandemic-delayed Biennale in 2021, but I didn't have a good excuse for missing the exhibition at Cooper Union, which opened on April 7th and closed just three weeks later. Reading the interview between former MoMA curator Barry Bergdoll and Daniel Sherer, a colleague of Lewis's at Cooper Union, that starts the book made me feel like I missed out, since they refer to video interviews between Lewis and architect Merrill Elam that accompanied a dozen projects displayed on the walls. Those projects — designed by former students and colleagues of Lewis — are present in the book that was released a few months after the exhibition's tenure at Cooper Union, but the videos are present only in comments here and there by Bergdoll, Sherer, Elam, and curator/editor Yael Hameiri Sainsaux. Transcripts of the videos would have been appreciated, but without them (and without them being posted, yet, to YouTube) the focus is clearly on the projects, both on their own merits and as expressions and distillations of the influential educator ideas on the city.
Beforehand, the best encapsulation of Diane Lewis's pedagogy at Cooper Union was Open City: Existential Urbanity, the large-format book published in 2015 that collected more than a dozen years of projects from the fourth-year "Architecture of the City" studios she taught at the famed architecture school. (Unfortunately, that book is incredibly hard to come by, at least in the usual online places.) Reflecting the "team teaching" of Lewis, Sherer, and other Cooper Union professors and guest professors, the studio work presented in the book's pages is loaded with "intention, realized by marks on the page or the cuts and connections of a model," as I wrote in my review back in 2015. The projects exhibit a reading of the city — New York mainly, but not always — that is layered both in time and space. Such a reading is explored by Bergdoll and Sherer in their conversation, which often refers to content from Open City and makes me think of a statement by Colson Whitehead (that I found in Marshall Berman's On the Town): "You are a New Yorker when what was here before is more real and solid than what is here now." For Lewis, designing something for a site in the city meant taking the site's history into account — in poetical, mythical, and other aspects well beyond the practical.

The projects assembled by Yael Hameiri Sainsaux for the exhibition and book are, best I can tell, recent projects — not student work, in other words. The sites for the projects are far away from the East Village context of Cooper Union, ranging from Canada to Switzerland, from Sweden to Greece. The types of projects vary as widely as their geographies, though they all appear to take the "civic" into account, providing programs that benefit the communal lives of city dwellers rather than the private lives of individuals or families. Take Georg Windeck's "Time Clouds: Playground and Archeology Garden," for instance. Situated in the Plaka district of Athens, the project provides play areas for children in elevated, cloud-like volumes lifted above an excavation site on Thoukididou Street (this site, I gather). The project would turn a vacant yet historically rich plot in the city into a useful part of the community, doing it in a way that would respect the ancient ruins and give the neighborhood a unique building inspired by the site's specific situation and the community's needs. Following a page and a half description (the norm for most projects in the book), Windeck's project is presented in large-format drawings and model photographs, as in the spreads below. Other projects depart from the hand drawings and hand-built models that prevailed in Lewis's Open City studios, but readers won't find computer modeling or rendering in these pages.

Beyond the Bergdoll/Sherer interview and the dozen projects are a dozen texts, starting with Sainsaux's "The Plan and Its Myth" and Merrill Elam's "Dedication: Diane Lewis on Screen." If the projects serve to link themselves to Lewis non-explicitly — through their programs and creative responses to urban sites — the texts they alternate with are more explicit in articulating the impact of Lewis's teaching, projects, and personality. (These texts stand out from the projects through their beige backgrounds, where the projects are white, but I wish there was also a clear distinction made in the table of contents.) A few standouts include Gerard Sullivan's presentation of two Lewis projects for sites adjacent to the Cooper Union's Foundation Building (both projects are in Inside–Out, Lewis's 2006 monograph), a transcription of Lewis's 2014 lecture at Montclair Art Museum on Olmsted and Vaux's Central Park, and the presentation of some pages from Lewis's sketchbooks in Rome, where she was a fellow at the American Academy, having received the Rome Prize in 1977. These pages add to the biographical portraits of Lewis conveyed through Inside–Out and Open City.

Conceiving the Plan offers a lot for former Cooper Union students, architects familiar with Lewis, like myself, and people who saw the exhibition in Venice and/or at Cooper Union, but I have a hard time finding an audience for the book well beyond those niches. The media of the projects is not as cohesive as Open City and even Education of an Architect, which Lewis co-edited and exhibits the influence of her mentor, John Hejduk; this means architects with an appreciation of hand drawings and models, like the illustrations above, will be only partially satiated. The mix of projects and texts paints a vivid portrait of Lewis and her influence, but it is far from comprehensive; one will have to wait for the video interviews to find a home online or perhaps be published as transcriptions, something I — and others, I'm guessing — would be interested in reading.
FOR FURTHER READING:
Email Post
Labels: skira