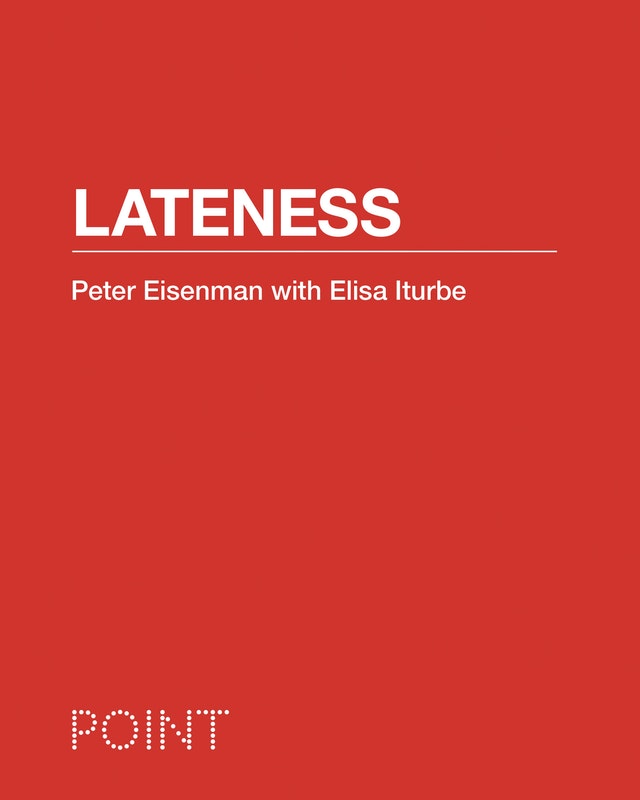 PUBLISHER'S DESCRIPTION:
Conceptions of modernity in architecture are often expressed in the idea of the zeitgeist, or “spirit of the age,” an attitude toward architectural form that is embedded in a belief in progressive time. Lateness explores how architecture can work against these linear currents in startling and compelling ways. In this incisive book, internationally renowned architect Peter Eisenman, with Elisa Iturbe, proposes a different perspective on form and time in architecture, one that circumvents the temporal constraints on style that require it to be “of the times”—lateness. He focuses on three twentieth-century architects who exhibited the qualities of lateness in their designs: Adolf Loos, Aldo Rossi, and John Hejduk. Drawing on the critical theory of Theodor Adorno and his study of Beethoven’s final works, Eisenman shows how the architecture of these canonical figures was temporally out of sync with conventions and expectations, and how lateness can serve as a form of release from the restraints of the moment.
Bringing together architecture, music, and philosophy, and drawing on illuminating examples from the Renaissance and Baroque periods, Lateness demonstrates how today’s architecture can use the concept of lateness to break free of stylistic limitations, expand architecture’s critical capacity, and provide a new mode of analysis.
Peter Eisenman is founder and principal of Eisenman Architects and visiting professor at the Yale School of Architecture. His many books include Written into the Void: Selected Writings, 1990–2004 and Tracing Eisenman. Elisa Iturbe is cofounder of the firm Outside Development and a critic at the Yale School of Architecture and the Irwin S. Chanin School of Architecture at the Cooper Union.
REFERRAL LINKS:

dDAB COMMENTARY:
Lateness is the third book in the POINT series edited by Sarah Whiting, following Sylvia Lavin's Kissing Architecture from 2011 and David Joselit's After Art from 2013. Clocking in at around 100 pages each, the series provides short, accessible essays with arguments for looking at architecture in unique, somewhat marginal ways. For architect Peter Eisenman, writing with Elisa Iturbe, the target of Lateness is architecture's infatuation with the new, something that is rooted in 20th-century Modernism but is also promoted through Parametricism's gung-ho embrace of digital technologies this century. A definition of "lateness" is hard to pin down, but it basically consists of architectural designs that are not interested in novelty or trying to fit in with the zeitgeist of contemporary architecture.
The argument is laid out in six chapters, three of them focused on individual architects: Adolf Loos, Aldo Rossi, and John Hejduk. The two chapters at the start of the book tread familiar ground for followers of Eisenman, since he looks outside of architecture to explicate "lateness." Most important here is not Jacques Derrida, as in decades past, but Theodor Adorno, who analyzed Beethoven's final works in a way that gave Eisenman ammunition for his argument. Writing of "lateness" as "the resistance to personal expression," "an alternative view of form in time," and "neither an explicit break with history nor an overt return to the past," Eisenman and Iturbe seem to be favoring a critical architecture that fits somewhere between Modernism and Postmodernism, echoing Colin St. John Wilson's The Other Tradition of Modern Architecture.
"Lateness" is explored in the projects of Loos, Rossi, and Hejduk through words and images, the latter in the black-and-red drawing technique Eisenman has used for decades and that has appeared in such books as Ten Canonical Buildings 1950-2000. Loos is examined through two houses, Villa Karma and Villa Müller; Rossi through Gallaratese Housing and San Cataldo Cemetery; and Hedjuk through the Texas Houses and the Wall Houses. The analyses discover different ways of appearing "late" — formally, temporally, dialectically — yet the book does not go so far as to offer a template for designing buildings in a "late" style. If it did, I'm guessing architecture students would create myriad variations on Hejduk's famous Wall House 2, whose piano curves were neo-Corbusian but whose circulation and programmatic relationships were entirely unique to Hejduk. Architects interested in critical alternatives to architecture's infatuation with novelty will appreciate Lateness, even as it provokes more questions than providing answers.
SPREADS: 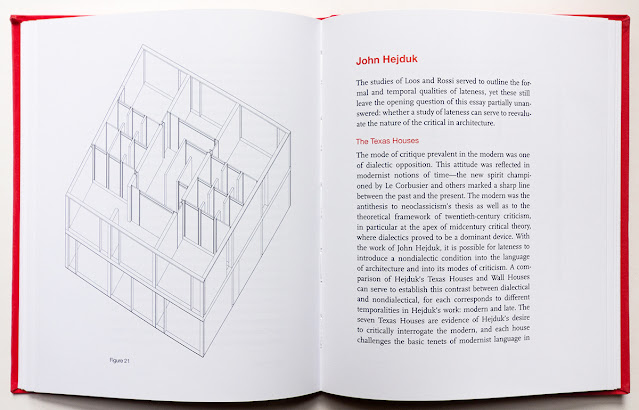 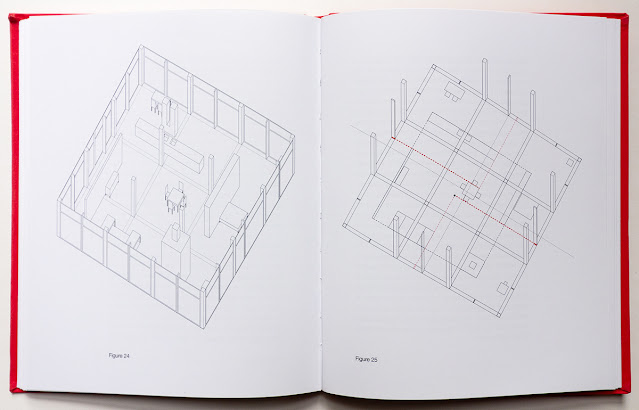 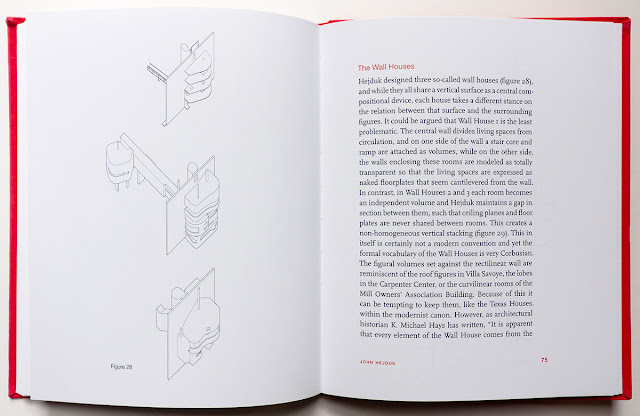 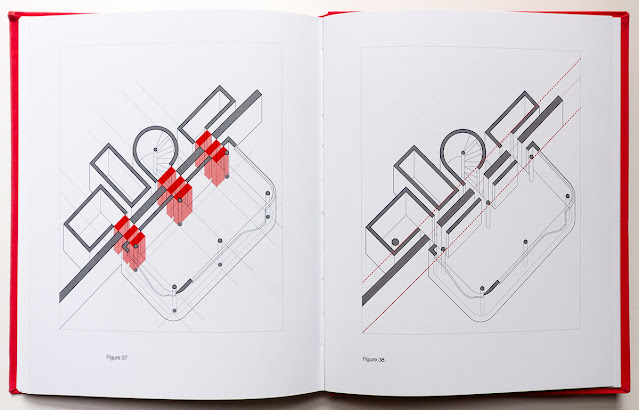