Modern Architecture and the Lifeworld 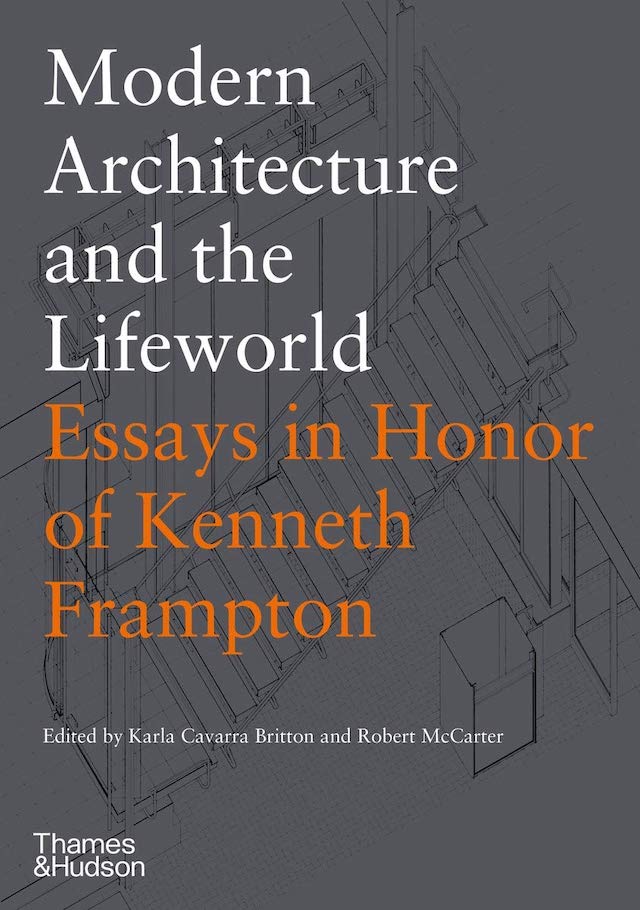 PUBLISHER'S DESCRIPTION:
The evolution of modern architecture has been inextricably entangled in issues of politics, nationalism, and the environment, creating a tension between local context and global development that is unresolved to this day. In this context, few writers have exerted as much influence on architectural theory and practice as Kenneth Frampton. In this illustrated volume, twenty-nine contributors from around the world amplify and pay tribute to his writing and thought. Intended for all those concerned with the built environment, this book offers further evidence of how this scholar, humanist, and teacher has shaped our understanding of the working reality of the architect. The premise of Modern Architecture and the Lifeworld is rooted in Frampton’s understanding of how architecture must engage with both cultural and constructional imperatives; and it addresses strategies for grappling with contemporary concerns such as regional identity amidst urban globalization, and tectonic culture and landform in the construction of place.
Karla Cavarra Britton is Professor of Art History at Dine College on the Navajo Nation, and has written extensively about modern and contemporary sacred architecture. Robert McCarter is an architect, author of twenty-two books, and the Ruth and Norman Moore Professor of Architecture at Washington University, St. Louis.
REFERRAL LINKS:

dDAB COMMENTARY:
Kenneth Frampton turns 90 tomorrow, November 20, 2020. In celebration of this milestone and Frampton's long and influential career as a historian, writer, and educator, the new Modern Architecture and the Lifeworld features 24 essays by an illustrious list of architects (Wang Shu, Rafael Moneo, Robert A.M. Stern, Steven Holl, Wiel Arets, Brad Cloepfil, Yvonne Farrell and Shelley McNamara, Marion Weiss and Michael Manfredi, etc.) and scholars (Mary McLeond, Harry Francis Mallgrave, Alberto Pérez-Gómez, Jean-Louis Cohen, Barry Bergoll, Anthony Vidler, Richard Plunz, Juhani Pallasmaa, etc.). Clearly it is a book for fans of Frampton, of which I'm pretty sure there are a lot — myself included.
Frampton is known best for Modern Architecture: A Critical History, first published in 1980 and a standard text in architectural history classes since. (Thames & Hudson just released a fifth edition of the book, which I'll feature on this blog soon.) Though chronological, the book is less a narrative of modern architecture than an assemblage of standalone chapters devoted to various important architects and movements. The chapters in the last of the book's three parts earn it the "critical" monicker, since that's where readers find, for instance, a chapter on "critical regionalism," which was added after the publication of another one of his influential texts: "Towards a Critical Regionalism: Six Points for an Architecture of Resistance" in Hal Foster's The Anti-Aesthetic in 1983. (That text has been so important to architects, a whole issue of OASE was devoted to it.) The book Studies in Tectonic Culture: The Poetics of Construction in Nineteenth and Twentieth Century Architecture, done with John Cava and published in 1995, rounds out an impressive trilogy of influential texts.
Stable throughout Frampton's career, since 1972, has been teaching at Columbia GSAPP. Before that, Frampton worked as an architect, editor, and professor — or tutor — in London. Upon leaving the UK, he landed at Princeton University and taught there for five years before the move to New York City, where Frampton the architect was able to realize one building: Marcus Garvey Park Village Housing in Brooklyn. A couple things are worth noting here: Frampton's tenured position at Columbia has allowed him to develop the research and materials for his books; and the fact he is an architect, and had worked as an architect in some capacity in London and NYC, means his texts appeal to architects, in part because he is cognizant of how architects think and work. Or as Mary McLeod puts it in the first essay in Lifeworld, "While the writings of other architectural historians, such as Reyner Banham and Manfredo Tafuri, may have had a greater impact on scholars, Frampton’s writings—a mixture of history, criticism, and analysis—have inspired architects..."
Readers interested in learning more about Frampton will be pleased with the book, though maybe, like me, a bit frustrated at times. By my count, the book is split fairly evenly between essays that directly encounter Frampton and his output and those whose relevance is more marginal. An example of the latter is Rafael Moneo's long critique of Robert Venturi's Complexity and Contradiction in Architecture; although it's accompanied by snapshots of Moneo and Frampton in dialogue in Madrid in 2017, Moneo's text could just as easily have landed in another collection of academic essays. On the other hand, Jean-Louis Cohen opts to explore some early articles by Frampton, "rather than microwaving a frozen lecture or conference paper." His contribution and others that are explicitly about Frampton's career are the most illuminating, with many of them coming from architects who were greatly influenced by the historian's books and teachings.
Some of my frustration comes with the prevalence of references to the trilogy of texts mentioned above, mixed with a few others, including Labour, Work & Architecture and A Genealogy of Modern Architecture: Comparative Critical Analysis of Built Form. Ashley Simone, who edited the latter with Frampton, does illuminate some aspects of Frampton's editorships at Architectural Design in the 1960s and Oppositions in the 1970s, but a narrow focus on Frampton's iconic works prevails throughout the book. I would have loved to read about parts of his career that are little known compared to A Critical History, "Critical Regionalism," and Studies in Tectonic Culture, be it his consultancy with Rizzoli in the 1980s, when architecture books were in an amazing abundance, or the failure of World Architecture 1900-2000 – A Critical Mosaic, a ten-volume series that should have been as widespread and influential on architects as his other books. Regardless of this minor critique, Modern Architecture and the Lifeworld is a must for fans of Frampton and the critical architecture he espouses.
SPREADS: 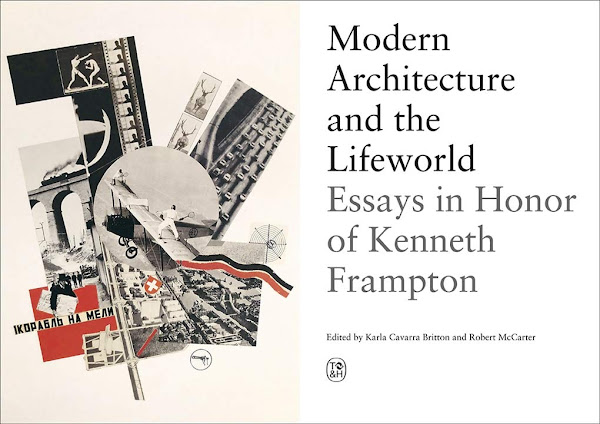 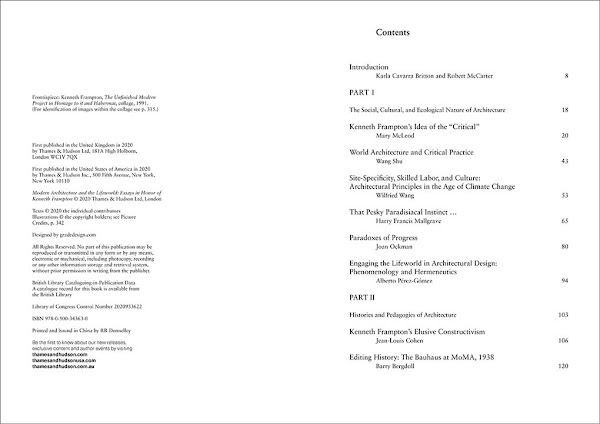 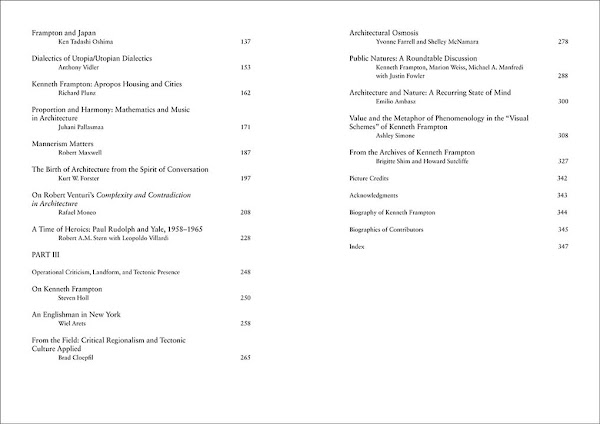 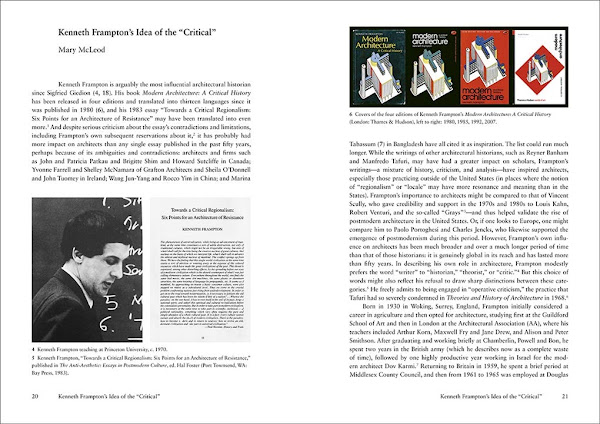 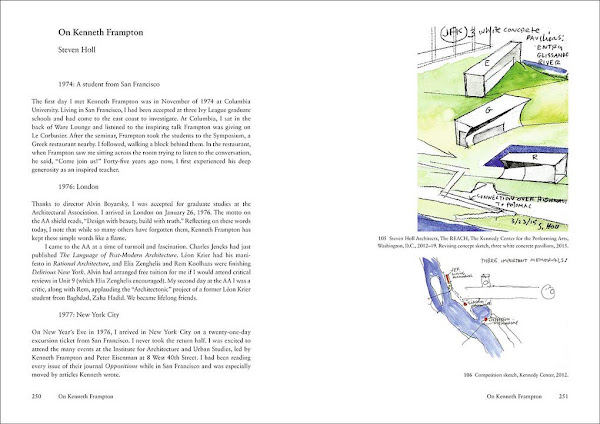