PUBLISHER'S DESCRIPTION:
Architectural Styles is an incomparable guide to architectural styles across the centuries and around the world. Modeled after an architect’s plein air sketchbook, the volume features hundreds of detailed drawings by esteemed architectural illustrator Robbie Polley alongside incisive and informative descriptions. This unique guidebook takes readers from Europe and the Americas to Egypt, China, and India. It covers a host of historical and contemporary architectural styles, from ancient and classical to Pre-Columbian, Romanesque, Renaissance, Palladian, art nouveau, Brutalist, and biomorphic. It describes the histories and characteristics of the building traditions of each era and region of the world, and looks at key architectural elements such as buttresses, spandrels, curtain walls, and oculi. The book also includes a section on building parts—from domes and columns to towers, arches, roofs, and vaulting—along with a detailed glossary and bibliography.
Margaret Fletcher is associate professor of architecture at Auburn University. Her books include Constructing the Persuasive Portfolio: The Only Primer You'll Ever Need. Robbie Polley is an architectural illustrator who has worked on major architecture projects around the world. His books include Architecture Inside-Out: Understanding How Buildings Work.
REFERRAL LINKS:

dDAB COMMENTARY:
Although it is squarely focused on one building type in one country, Virginia and Lee McAlester's A Field Guide to American Houses makes a strong argument for presenting architectural styles. The book — first published in 1984 and then substantially updated by Virginia three decades later — gives laypeople skills for making sense of the great number of houses spread across the United States, and it serves as a reference for architects and builders who are renovating or expanding existing houses. Historic preservation underlies the whole, with the composition and articulation of building elements anchoring the "field guide." Accordingly, the book's second edition falters somewhat when it tries to define contemporary houses, which are less beholden to style than the freedom to mash up architectural elements into designs that defy categorization.
I couldn't help think of the McAlsters' book in reference to Architectural Styles: A Visual Guide, written by Auburn University professor Margaret Fletcher and illustrated by Robbie Polley, particularly in regards to purpose: what is the purpose of a book about architectural styles published when architecture is less and less defined by style? The most obvious answer is teaching people — all sorts of them, not just architecture students — about architectural history; giving them an understanding of the built world around them. A potential side effect of an emphasis on style and the architectural elements that comprise them is a preference for (neo)traditional over contemporary architecture. But the inclusion of Deconstructivism, the Parametric, and other "isms" in the Modern and Contemporary chapter indicates that Fletcher wants to give as a broad an overview as possible. She treats all styles clearly and evenly through a consistent format of brief descriptive texts, bullet points of key features, and descriptive captions accompanying Polley's line drawings of significant buildings.
Flipping to the section on Deconstructivism in the Modern and Contemporary chapter (second spread below), it's hard to disagree with the notable buildings included: Bernard Tschumi's Parc de la Villette, Daniel Libeskind's Jewish Museum Berlin, Peter Eisenman's Wexner Center for the Arts, Zaha Hadid's Vitra Fire Station, and Coop Himmelb(l)au's UFA Cinema Center. All of these architects were included in the Deconstructivist Architecture exhibition at MoMA in 1988, as was Frank Gehry, whose own house in Santa Monica was one of the few projects at the time to capture the "absence of spatial harmony" and "disassembled aesthetic" — to pull two of Fletcher's bullet points from her text — in built form. Here Gehry's Vitra Fire Station and Guggenheim Museum Bilbao are used to help describe Deconstructivism, though his firm's use of computer software to realize the latter — and every Gehry building since — can also be seen as a precedent for the Parametric (third spread), which "relies on the iterative capacity of digital scripting programs to generate architectural space and form," in Fletcher's words. The Hadid building in that section makes perfect sense, but I'm confused by the inclusion of the NMAAHC designed by David Adjaye, et. al.; the patterned screen may involve parametric scripting, but the form is something else, something more broadly contemporary.
Modern and Contemporary is the last of four chronological style chapters, followed by a concluding chapter devoted to architectural elements. These include domes, columns, windows, roofs, vaulting (fourth spread), and stairways, among others. It would have been great for Fletcher and Polley to embrace modern and contemporary elements to the same degree as traditional ones, which are in the majority, to illustrate how architects still use these building blocks, just in ways that depart from historical norms. The columns, for instance, are limited to the classical orders and some variations, without presenting more recent examples, be they Gaudi's idiosyncratic columns, Corbu's pilotis, Mies's cruciform columns, or even Shigeru Ban's cardboard tubes. I'll grant that these examples are harder to depict in line drawings, but to me the shortage of the modern and contemporary in this last chapter makes this easy-to-read book an informative, but unfortunately incomplete, education.
SPREADS: 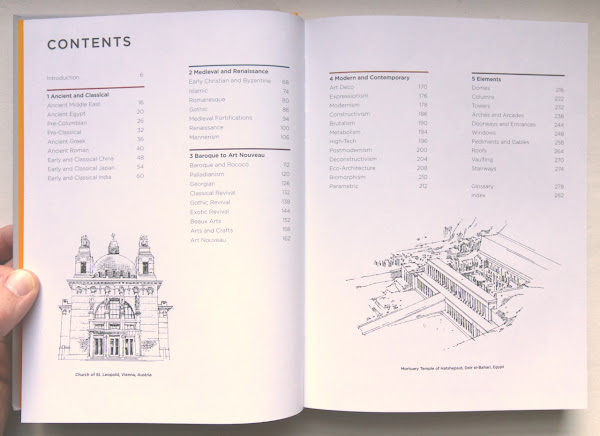 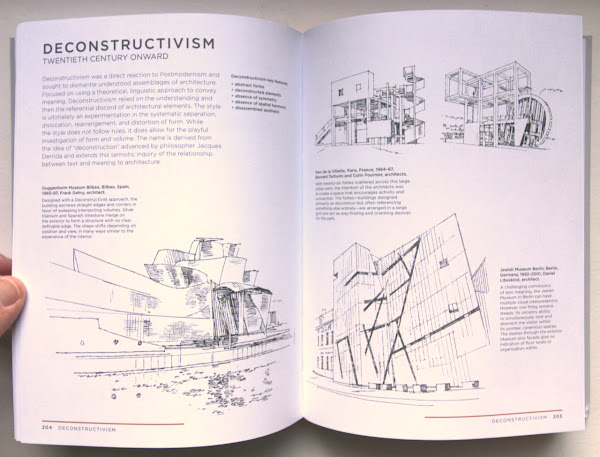 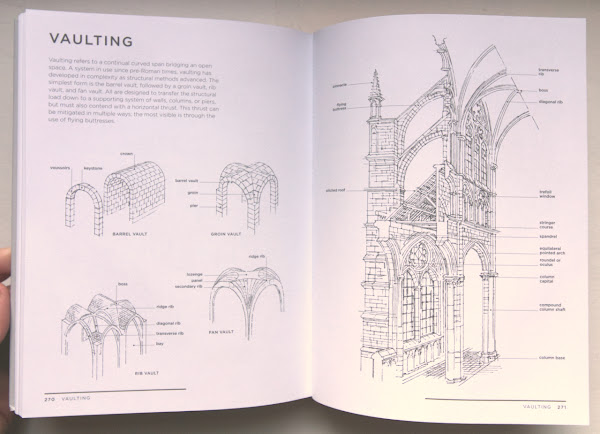