Imagining the Future of the Museum of Modern Art PUBLISHER'S DESCRIPTION:
This illustrated volume documents the entire expansion planning process including the architects' proposals, and transcripts of the various speeches, debates, and forums concerning the two-year effort to select an architect for the expansion of the Museum.
Presented in this volume are the charette submissions, or design exercises, of the ten initial architects, as well as the competition proposals from the three finalists-Jacques Herzog and Pierre de Meuron, Yoshio Taniguchi, and Bernard Tschumi. After an extensive review of these proposals, the commission was awarded to Taniguchi, a model of whose design appears on the cover of this publication. 48 color and 256 b/w illustrations.
John Elderfield is Chief Curator Emeritus of Painting and Sculpture at The Museum of Modern Art, New York; the Allen R. Adler, Class of 1967, Distinguished Curator and Lecturer at the Princeton University Art Museum; and Consultant for Special Projects at Gagosian Gallery.
REFERRAL LINKS:

dDAB COMMENTARY:
Charles Saumarez Smith's recently published The Art Museum in Modern Times, which I reviewed a couple days ago, features short case studies of around forty art museums around the world, starting with the Museum of Modern Art (MoMA) in 1939 and extending to couple of museums that opened in 2019. One of the "other" museums along the way is MoMA itself, specifically its 2004 transformation by Japanese architect Yoshio Taniguchi. Just a decade after that, MoMA was already debating another expansion, one that would lead to the demolition of the beloved (by architects, at least) Folk Art Museum designed by Tod Williams and Billie Tsien. MoMA opened its latest expansion, courtesy of Diller Scofidio + Renfro, five years later, in October 2019, meaning Saumarez Smith could have included MoMA a third time, bookending his extensive case studies with the most modern of modern art museums.
Reading The Art Museum in Modern Times prompted me to grab my copy of Imagining the Future of the Museum of Modern Art off my shelf, a book I found for one dollar many years ago (it can be had for not much more than that online) but never got around to reading. Devoted to the process of programming MoMA's major expansion and finding an architect for it two decades ago, it is the seventh — and last, best I can tell —  book in the Studies in Modern Art series, which found MoMA doing a bit of navel-gazing on its collection and itself as an institution. The series started with American Art of the 1960s, which has an essay devoted to Robert Venturi's Complexity and Contraction in Architecture, published by the museum 25 years earlier. Number six is focused on Philip Johnson's role with the museum, from designing its sculpture garden to being a donor and curator. By comparison, number seven is extra-large, the equivalent of those other two books I have in the series put together.
Imagining the Future is so big because it includes competition schemes but also transcripts of numerous conversations and lectures about the museum expansion: the conversations from "The Pocantico Conference" held in October 1996 and the latter from a lecture series held at MoMA in the months following the conference. The first was private while the second was public, but both are included here, a remarkable instance of a museum revealing what is normally hidden as well as a sign of how seriously and thoroughly it was considering its transformation. Even so, the result, come 2004, was "a beautiful, cool and cerebral monument to modernism," in Saumarez Smith's words, but also "too bland, too like a corporate headquarters for modern art." A similar document does not exist (yet) for the recent DS+R project, but the most interesting aspect of their renovation and expansion is how it had to deal with the phenomenal success of Taniguchi's project — a success that made MoMA one of the most difficult places to look at and appreciate art.
The conference and lecture series transcripts take up a little less than half of the book, with the balance devoted to the architectural ideas for the expansion. MoMA Had selected ten architects in early 1997 and invited them to participate in a roughly month-long charette — not a formal design competition, but the generation of "multiple responses to the site conditions and the museum's preliminary conceptual and programmatic needs." Of course, designs were nevertheless in abundance, albeit cursory ones. The most remarkable contribution, then and all these years later, is OMA's hefty 350-page charette book (spreads, below) "that proposed turning [MoMA] into an edgy shopping mall," something Taniguchi's design kind of became — minus "edgy" — after its completion. Imagining the Future documents all of the charette contributions plus the design schemes of the three finalists: Taniguchi, Herzog & de Meuron, and Bernard Tschumi. It's hard not to ponder the what-ifs when seeing the other submissions, but the book also makes me wish other institutions would do similar thorough documentations of their competitions. The only other instance that springs immediately to mind is the Austrian Cultural Forum New York, which published the entries to its 1992 competition in book form.
SPREADS: 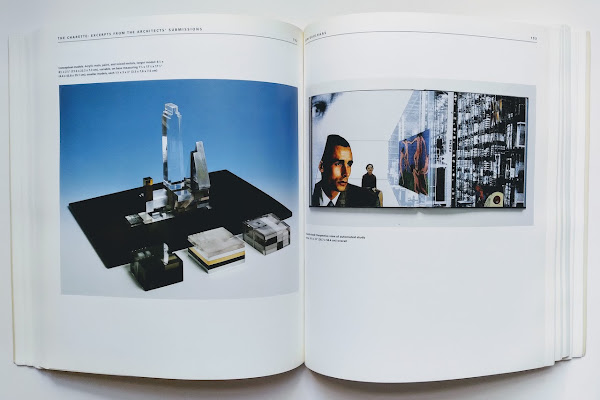 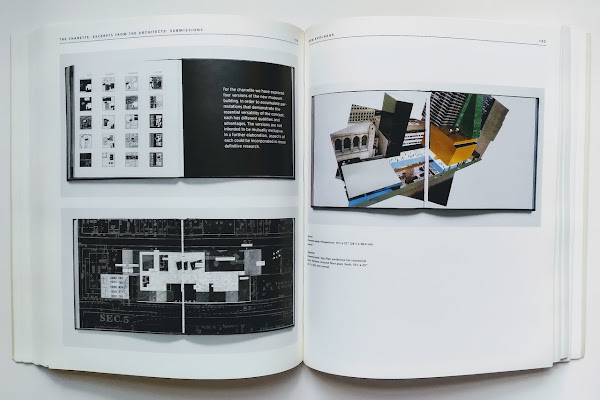 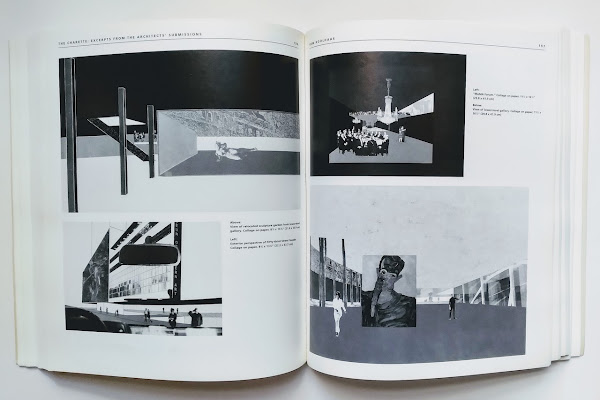 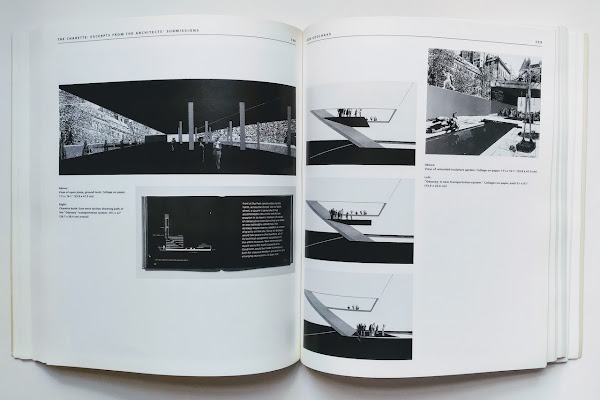