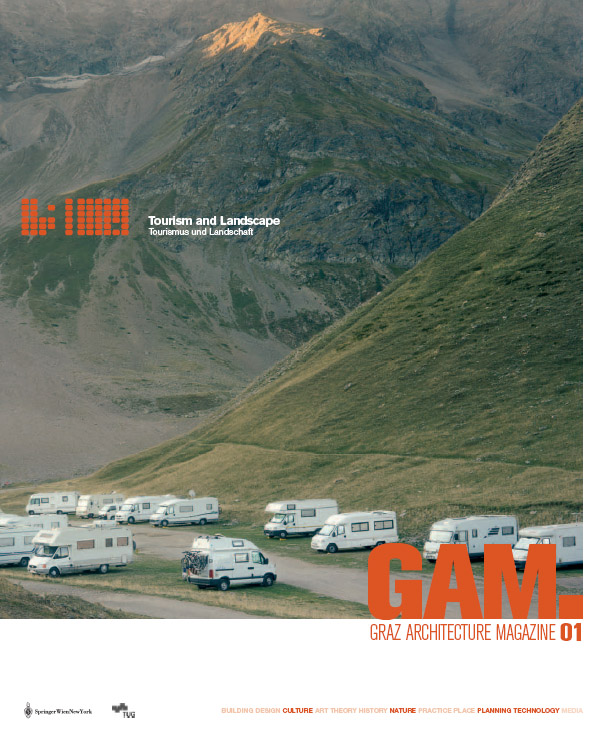 PUBLISHER'S DESCRIPTION:
The transformation of space, both physically in the form of buildings and complexes, and non-materially, i.e. in its social perception and utilization, is the core issue explored by GAM. The articles in GAM.01 - Tourism and Landscape cover a range of topics from the current problems of the Huaorani in the rainforests of South America to the plans for winter sports resorts in the French Alps, from the Fürst-Pückler-Land landscape park being built on industrial wastelands in the eastern part of Germany to the pseudo worlds of hotel complexes in Las Vegas. GAM, published by the Faculty of Architecture at Graz University of Technology, sees itself as a platform for an international architecture discourse.
With contributions by George Baird, Regina Barth-Grössler, John Bass, Jordi Bernadó, Odile Decq, Theo Deutinger, Ana María Durán, Ursula Faix, Ragnar Kittel, Virginie Lefebvre, Walter Niedermayr, Dominique Perrault, Mónica Ponce de León, Gabriele Pütz, Bas Princen, Bernhard Tschofen, Margherita Spiluttini.
REFERRAL LINKS:

dDAB COMMENTARY:
Having reviewed a couple of books on tourism this week, and with my plan to review the latest issue of GAM next week, this "wayback weekend" is a good time to grab the first copy of the Graz Architecture Magazine, themed "Tourism and Landscape," off my shelf. I had bought the issue back in 2006, when I was about halfway through the Urban Design program at CCNY and our studio was working on a sustainable master plan for the town of Lago Agrio in Ecuador's Amazon region. Of relevance in the pages of GAM.01 was "The Lesser Evil: Eco-Tourism in the Amazon Rain Forest" (fourth spread, below) by Mónica Ponce de León and Ana María Durán, the latter of whom was teaching at the Pontifica Universidad Católica del Ecuador at the time and was involved in our studio's trip to Ecuador. Durán was actually instrumental in the studio being focused on Lago Agrio, having informed Michael Sorkin about the place and convinced him that it would be worthy of one of the program's design studios usually situated far away from New York City.
Looking at the essay now makes vivid my memories of our studio's bus ride from Quito into the Amazon basin, our days spent in Lago Agrio, and our trip into Yasuni National Park. The "security check-points, military installations, and a proliferation of camps, depots, towns, and villages," as recounted by Sorkin in a 2007 piece in Architectural Record, were a far-cry from anything touristic that I'd ever encountered, but such was the outcome of the national government and multinational corporations hellbent on extracting oil interacting with indigenous groups long sustaining off the bounties above the oil. Durán and de León describe the conflicting interests and the development that followed the discovery of oil, ultimately arguing for eco-tourism as an alternative to oil extraction and for construction techniques rooted in the place (bamboo) rather than those imported from the coast (concrete).
The issue features seven other lengthy, in-depth essays about particular places and various aspects of tourism. Not surprisingly, given the journal's home base in Graz, more than one essay takes the Alpine region as its focus, including Ursula Faix's "The Sound of Music. The Image of Architecture" and Bernhard Tschofen's "Rated: "Alpine" – Tourism and Architecture in the Context of Everyday Culture." Aside from "The Lesser Evil," a standout for me is George Baird's "Mutant Urbanity: Re-visiting Las Vegas" (second spread). Inserted between the essays are four photo spreads by photographers Margherita Spiluttini (first spread), Jordi Bernadó, Bas Princen (third spread), and Walter Niedermayr. A couple projects (by Dominique Perrault and Odile Decq) follow the essays and photos, with publications and news of the Faculty of Architecture at Graz Institute of Technology at the very end. It is a format that has stayed fairly consistent up the latest issue, as will be revealed in a few days.
SPREADS: 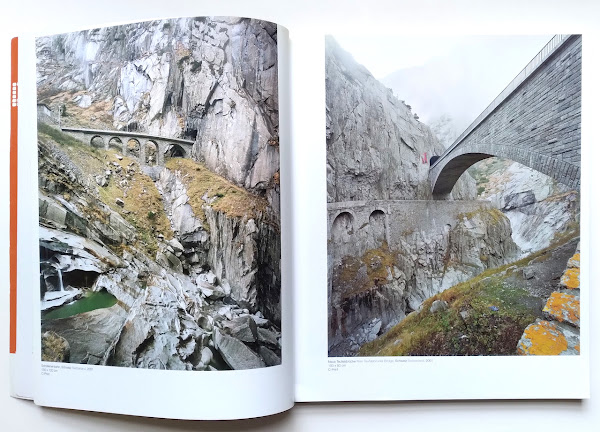 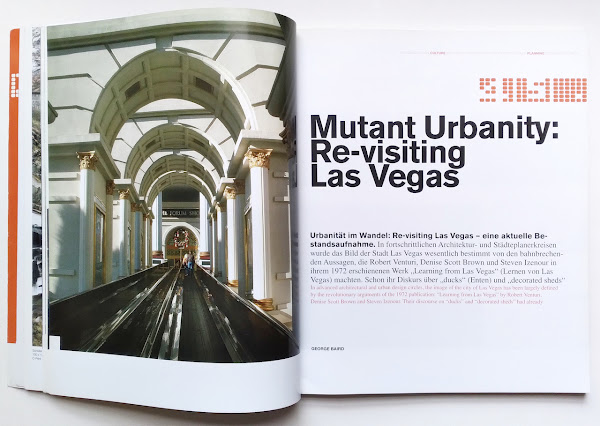 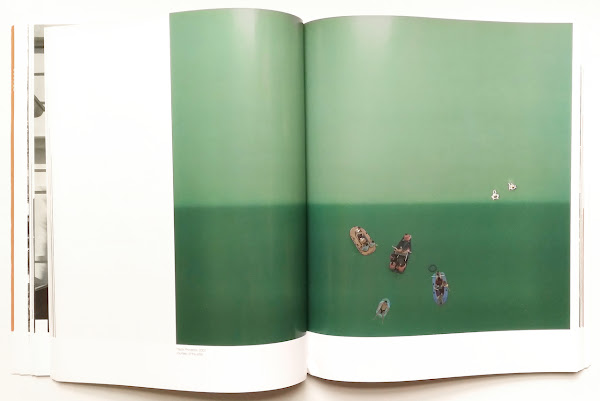 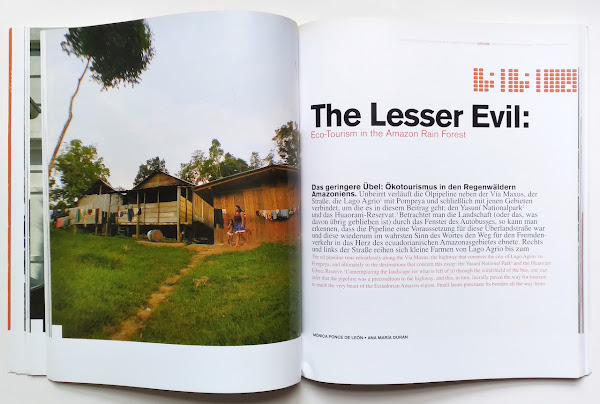