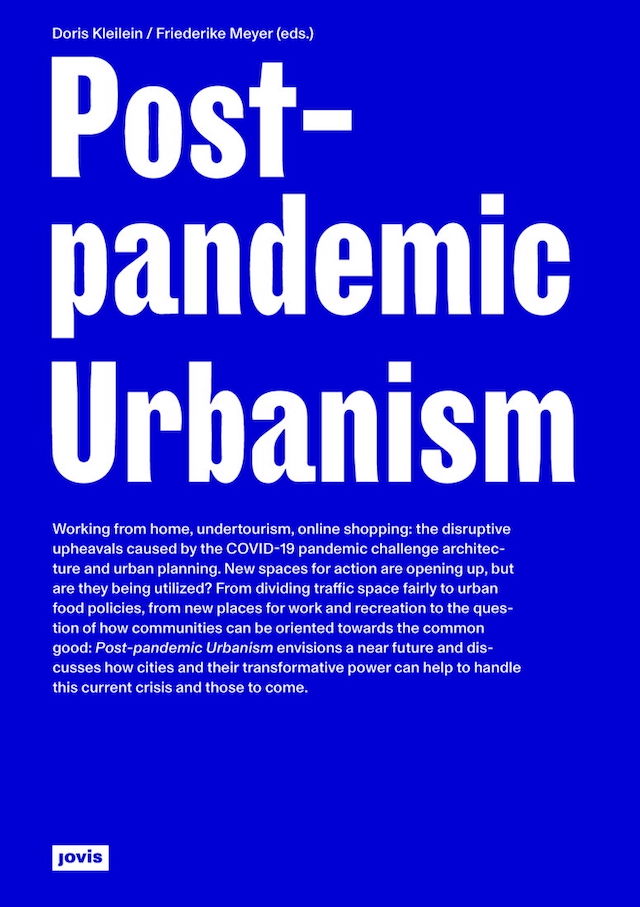 PUBLISHER'S DESCRIPTION:
Working from home, online shopping, undertourism: the disruptive upheavals caused by the COVID-19 pandemic challenge architecture and urban planning. New spaces for action are opening up, but are they being utilized? From dividing traffic space fairly to urban food policies, from new places for work and recreation to the question on how communities can be oriented towards the common good: Post-pandemic Urbanism envisions a near future and discusses how cities and their transformative power can help to handle this current crisis and those to come.
REFERRAL LINKS:

REVIEW:
It was November of last year when Jovis sent me a copy of Post-pandemic Urbanism, arriving when Covid cases worldwide were averaging around a half-million every day but were steadily increasing. By the end of the year cases had ramped up steeply, as the omicron variant spread around the world and speedily reached its peak about one month later. All I could think each time I glanced at the book on my desk was that a book devoted to post-pandemic urbanism was premature — what was needed was a book on intra-pandemic urbanism: on how to live with the pandemic rather than quickly rush beyond it. The title made it seem that the editors and contributors, like society at large, wanted to move past lockdowns and other aspects of Covid, though it also implied the desire for something different, not a return to the status quo. Whatever the case, at that time I was in no mood to dive in. Then, in late April of this year, Dr. Fauci proclaimed that the United States was "out of the pandemic phase." Although he quickly backtracked on his words after they spread and were simplified in social media (rather, the US was not free from the virus; it had just moved beyond it spreading in a way that overrunning hospitals was a concern), it seemed like the time was ripe to give a book about post-pandemic urbanism a chance. 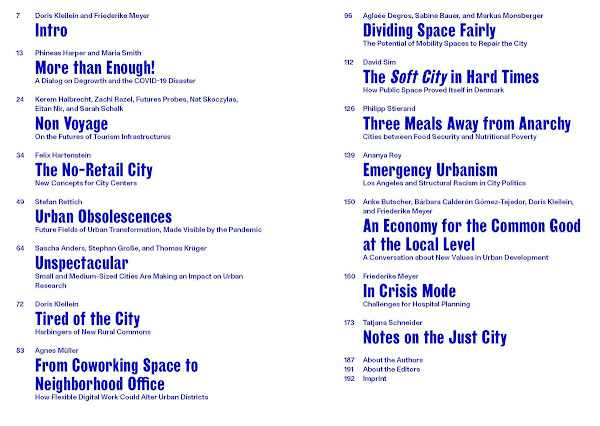 Post-pandemic Urbanism has fourteen essays across its 192 pages. Most appear to have been written especially for the book, though some of them indicate that they were published previously in other venues. One of the latter is the first essay in the book — and one of its best: Phineas Harper and Maria Smith's "More than Enough! A Dialog on Degrowth and the COVID-19 Disaster." Harper and Smith were two members of the curatorial team for the Oslo Architecture Triennale 2019, titled "Enough: The Architecture of Degrowth." Across its ten pages, the pair basically argues for a future that is not dictated by neoliberal economics and the harmful environmental effects of striving for continued economic growth; sharing, equality, and health are some of the concerns that are paramount for them, not profit. It's an appealing start to the book, even though its relationship to Covid is tenuous, or at least secondary; this is not surprising, since it was based on a pre-pandemic exhibition and first appeared in Space Caviar's 2021 book Non-Extractive Architecture Volume 1: On Designing Without Depletion. 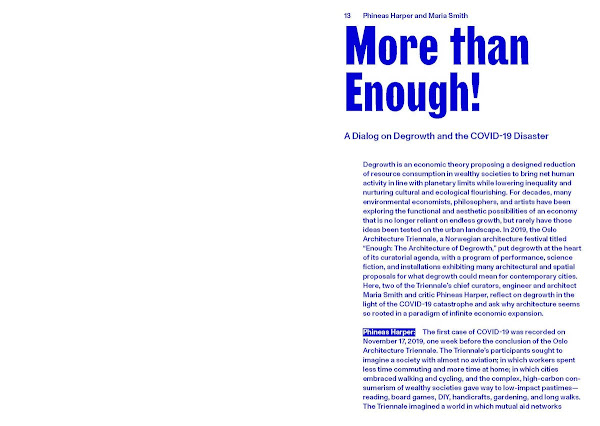 The next contribution, "Non Voyage: On the Futures of Tourism Infrastructures," is more directly relevant to considerations of post-pandemic urbanism, given that tourism was the industry most greatly affected by lockdown measures: workers stayed home, airplanes were grounded, hotels were converted into shelters, and convention centers were turned into emergency hospitals. The clearer, cleaner air in China, India, and Los Angeles, and the reduction in carbon levels that were measured in the first year of lockdown were some of the undeniable indicators of the negative impacts of mass tourism on local, regional, and global environments. Created by Future Probes, "a research collective of four female futurists," and others under the name Non Voyage, the speculations on "futures of tourism infrastructures" are explored in images (collages, illustrations, drawings, a comic) that point to the paradoxical nature of tourism: people know the adverse affects of airplanes, cruise ships, hotels, and other aspects of tourism, but the lure of experiencing remote cultures is simply too hard to resist. 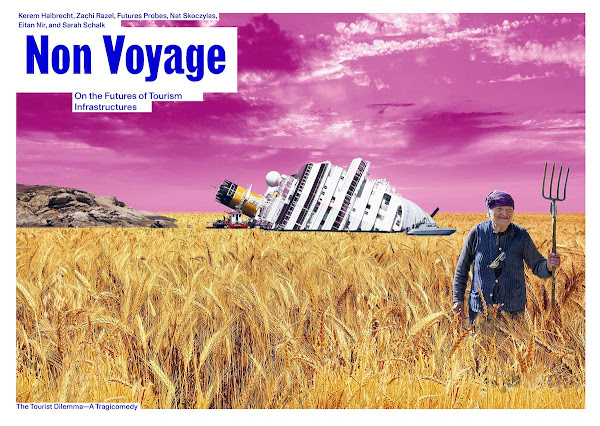 Think of any aspect of city life that is/was impacted by Covid — and there were many — and it is included here. Felix Hartenstein looks at the "No-Retail City," in which "going into town today" does not preclude going shopping. His contribution sees the shift toward online shopping as continuing its current trend, thereby eliminating the need for any type of shop, be it mom-and-pop or big-box. Even if this trend shifts in the future and shops rebound, there is something to be said for cities providing spaces for non-consumer activities. Another essay, Doris Kleilein's "Tired of the City," looks at the shift from cities to the countryside that happened with (mainly well-off) people during the pandemic and was beforehand evident in Rem Koolhaas's Countryside exhibition, which was ironically truncated by the pandemic. The future of workplaces is the subject of "From Coworking Space to Neighborhood Office" by Agnes Müller, who hesitantly promotes so-called "neighborhood offices" but realizes the various difficulties to be found in veering from traditional offices. The list of subjects goes on, with the editors covering about every piece of urban life that may or will be reshaped by pandemic and other forces in the coming decades. 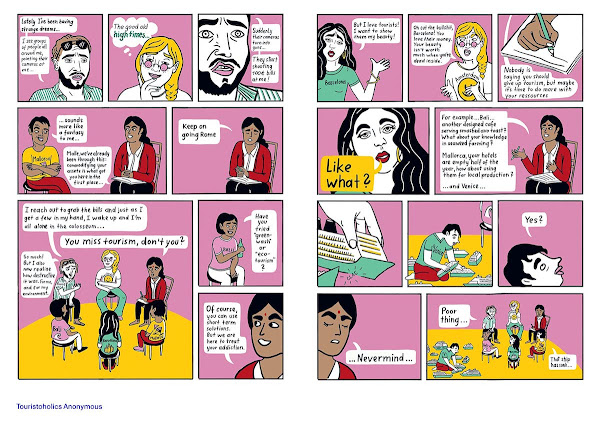 Even with topics as broad as tourism and workplaces, Post-pandemic Urbanism is very local; it is very German. Many of the essays look at conditions that are global but use examples that are specific to Germany. This is hardly surprising, given who the editors, contributors, and publisher are; and given that it is human nature to relate abstract ideas and theories to personal experiences and contexts that are immediate. I didn't mind the references to places in Germany I often had no familiarity with; after a while I expected it. One drawback is that many of the bibliographic references (they are listed at the bottom of the pages, as in the "Tired of the City" spread below) point to texts that are in German, making it difficult for readers of English who want to gain a greater understanding of some statement by looking at its original source. Also, I found at least one instance where a citation points to a German text but an English text also exists; in such a case the editors ideally would have pointed to the English source even if the author didn't do so in her original German text. 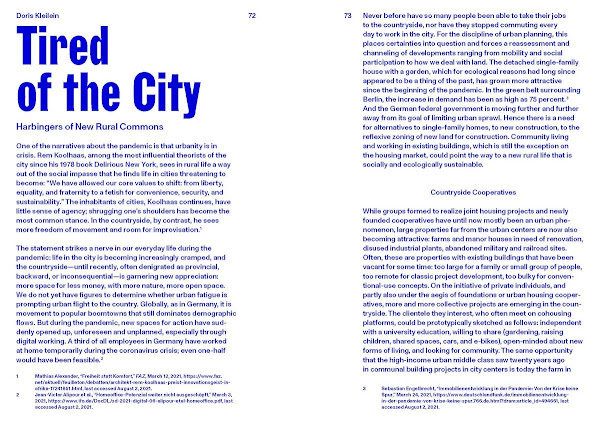 One last aspect of Post-pandemic Urbanism to touch upon is the choice of images that accompany the essays. It was done in a few ways: no illustrations; illustrations done by the authors; illustrations specifically related to the text; and illustrations related to the broader topic of the book but not related to the text. The first is found in the lead essay about degrowth; the second clearly relates to the tourism piece; the third can be found in "Tired of the City" (spreads above and below), which discusses Prädikow Farm in Brandenburg; and the fourth is most dramatic in the last essay, Tatjana Schneider's "Notes on the Just City," which also happens to have that bibliographic reference to a report in German that was also translated into English (or vice-versa, I'm not sure). Schneider's broad look at the "just city" works well in combination with the first essay on degrowth, bookending the more specific essays in between. Schneider's previously published "notes" are accompanied by photographs of nurses and other frontline workers whose faces bear the imprints of masks after long shifts; this is not a something touched on by Schneider, but it is clearly a condition related to the pandemic. 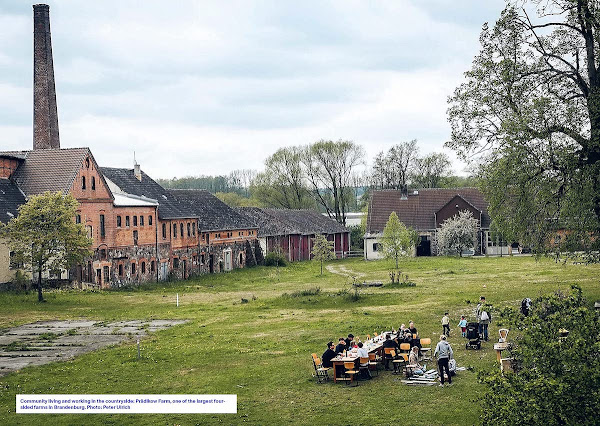 The presence of the photographs interspersed with Schneider's text make me wonder if the portraits — and other images in the book unrelated to the corresponding essays — should have been broken out on their own and further accompanied by even more visual commentary on the pandemic and its potential impact on city life. There is so much to be explored in the topic at hand that images should have been part of it to a greater degree, given that images can provoke as much as words and point to other scenarios that are not as easily articulated in words. The Non Voyage contribution is more or less successful in this regard; the portraits of the nurses and frontline workers are powerful, but they are a bit distracting in Schneider's essay (it's like being stared at while trying to read). There will certainly be other books dealing with the impact of Covid on the built environment. As such, this book is a very good start.
FOR FURTHER READING:
Email Post
Labels: jovis